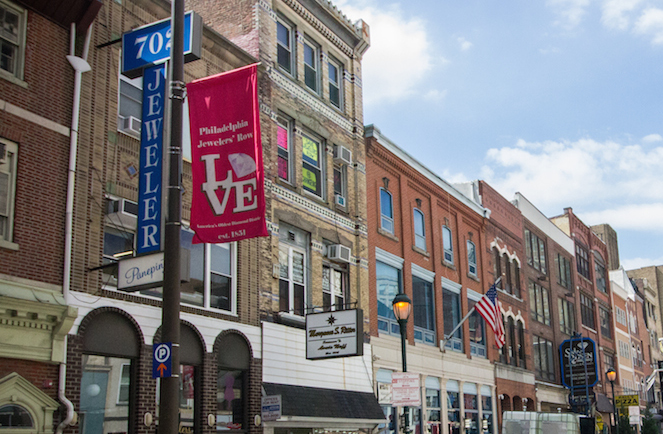 Advocates for saving two commercial properties under threat of demolition on Jewelers Row were given some hope today after the Philadelphia Historical Commission’s Committee on Historic Designation ruled in favor of recommending 704 Sansom Street and 706-08 Sansom Street for placement on the Philadelphia Register of Historic Places. The early 19th century properties are part of Carstairs Row, the first speculative row house development in Philadelphia and make up one-eighth of America’s oldest jewelry district. National suburban homebuilders Toll Brothers seek to demolish six historic properties and erect a 16-story, 80-unit apartment tower in their place. Two separate nominations of the buildings were submitted by the Preservation Alliance for Greater Philadelphia in an ongoing effort to aid in circumventing demolition permits from being issued by the Department of License and Inspections. However, even if designation is approved by the full Historical Commission at a hearing on November 10, L&I retains jurisdiction over the demolition permit application. L&I may issue a permit to tear down the buildings despite placement on the historic register if it is determined that the demolition permit application meets the requirements for issuance.

Robert Pupo, owner of 706-08 Sansom Street, and his attorney opposed the nomination, citing the lack of architectural merits of the buildings due to a series of façade alterations. They claimed that the properties lacked specific historical significance, pointing to the building’s use as a publishing house prior to its transition into workspace and retail fronts for the jewelry trade. Speaking in favor of Toll Brothers’ proposal, Pupo said that “the Internet is stealing all of our business” and that the new condominium tower would “stimulate the street,” which, in his view, has lingered in an economic slump stemming from the 2007 recession. Pupo’s legal counsel maintained that efforts to preserve and protect the buildings from being razed for new residential construction were simply obstructionist tactics to prevent economic development on the historic commercial corridor. 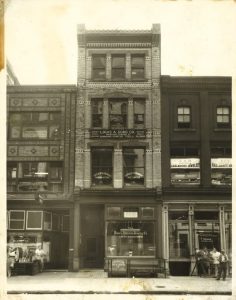 Patrick Grossi, advocacy director of the Preservation Alliance for Greater Philadelphia, addressed the issue of architectural merit by stating that demolition of the two buildings would disrupt the historic and architectural continuity of the buildings and that the evolution of use are what make them significant in interpreting the narrative of Jewelers Row. “These buildings have evolved and are poised to evolve again.”

Designation committee member Jeffery Cohen echoed this sentiment by saying that maintaining a sense of place was more important that simply architectural merit. “It is cohesive continuity and a matter of scale, namely hortizontal. To separate the properties from their context to the street would be a mistake.” Cohen said that the properties were architectural examples of commercial buildings of the 19th century and stand as important pieces of Carstairs Row, which, he said, “was residential development that set the rhythm for building in Philadelphia.”

In regard to widespread community opposition to demolishing one-eighth of Jewelers Row, Cohen said that, despite the Committee’s misgivings about architectural merit arguments made in the nomination, “public interest needs to be heard.”

Jane Theis, a jeweler and tenant of 704 Sansom Street for 40 years, offered a personal statement regarding life on Jewelers Row and why the five buildings should be preserved. “Tourists come to see it. It’s in a National Historic District and blocks away from Independence Hall. It is a living thing and it deserves to continue to live.”

Chen Li Chang, a first-generation Chinese American, said that during her upbringing in Chinatown staving off hasty outside development and securing the historic fabric of the area has been crucial to preserving the cultural character of the neighborhood. “You can always make more money, but you can never make more time,” said Chang.