Celebrating A Hive Of Architecture 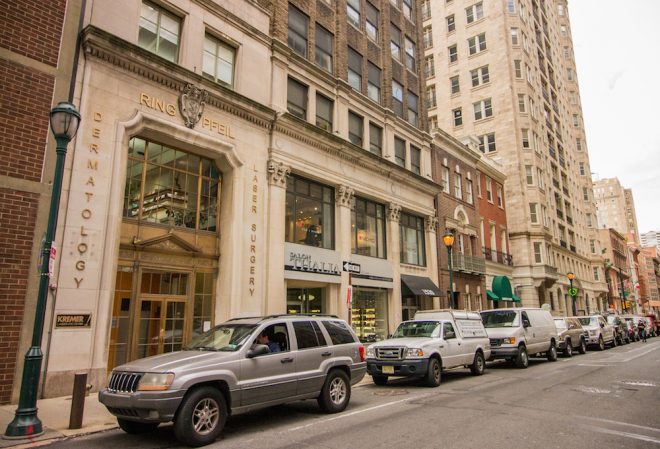 The Bonbright Building has one of the prettiest entryways on Locust Street. The retail space to the right was long home to TLA Video, which ceased operation in 2011. | Photo: Michael Bixler

The 1500 block of Locust Street is a bouquet of architectural delights. Some are outstanding works of artful engineering, like Frederick Webber’s 15-story Beaux-Arts apartment house at 1530 Locust Street, The Versailles, built in 1921 with two elevator cores to eliminate long hallways. Others, like the bland Brutalism of 1521 Locust Street and architectural firm Cope Linder Associates’s unmistakably 1980s take on Art Deco with the PATCO Tower at 1525 Locust Street, are flat-out mediocre. Perhaps the best on the block is the Bonbright Building, 1518-1520 Locust Street, a 12-story office building that served as a hive of inspiration to an entire generation of Philadelphia architects and builders.

The Bonbright Building was a sight to behold. Its stone base at street level and beautiful brickwork running up the rest of the façade was topped by a row of columns and a handful of hidden details. The building was designed with an odd shape. One side faces Locust Street and another faces the little intersection of Latimer Street with only a very thin section connecting them at the halfway point. 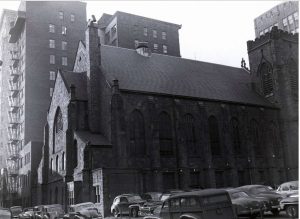 The slim opening on the eastern party wall was most likely included in the building’s design due to the placement of the First Presbyterian Church at 15th and Locust Streets, demolished to make way for the garish parking garage façade of 1500 Locust Apartments. At the time the opening allowed for a pretty expansive eastern view of Center City without much obstruction from the church. In an unusual move, both of the party walls on the Bonbright Building have windows, making the offices especially light and airy. The rear of the 12th floor facing Latimer Street had a stone balcony that was later replaced with a concrete one in the 1950s.

In the early 1940s, marketing and advertising firms also had offices in the Bonbright Building until General Refractories, Inc. purchased it in 1947. The company, still in existence today as a much smaller operation in Bala Cynwyd, produced high-temperature resistant bricks and mortar used in home furnaces and large machines for manufacturing. From the company’s headquarters in the Bonbright Building, General Refractories, Inc. controlled a substantial portfolio of mines and factories across America and several other countries. The concern shared the building with Rambo, Close, and Kerner, an investment securities firm, which had an entrance on the Latimer Street side.

General Refractories moved out in 1973 and the building came under the control of a partnership between the Philadelphia Authority for Industrial Development and the firm of John Loyd & Associates, which were commissioned to modernize the building with large-scale engineering and office upgrades. 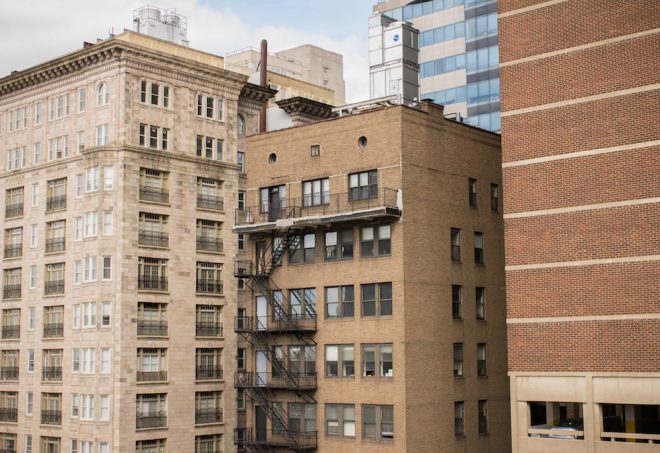 Back view of the Bonbright from Latimer Street. The building’s concrete balcony, which was replaced in the 1950s by General Refractories, looks a tad treacherous. | Photo: Michael Bixler

In the following decades an eclectic mix of businesses and organizations leased office space there, including the 100-year-old local realty firm Kahn & Company, the Marketing and Advertising Association, and the Philadelphia Coordinating Council on the Holocaust, among others. The building was even used as the Supreme Lodge of the Sons of Italy in America. Data management firm General Data Systems—developers of the outrageously expensive auto insurance policy-making software FAM-V—occupied offices in the old Bonbright Building for a number of years. In 1985, the Theater of the Living Arts leased offices on the second floor and opened the second branch of its famous video store, TLA Video, at street level.

Philadelphia Management Corporation (aka PMC Group) bought the property in 1995. The building is currently fully occupied and houses a wide range of tenants, ranging from BYOB amateur craft studio, Painting With a Twist, the Greater Philadelphia Hispanic Chamber of Commerce, and, on the ground floor, Salon Thalia, which took over the retail space formerly occupied by TLA video, which moved out after ceasing all video rental operations in 2011.