The Spark And Influence of City Visions 30 Years Later 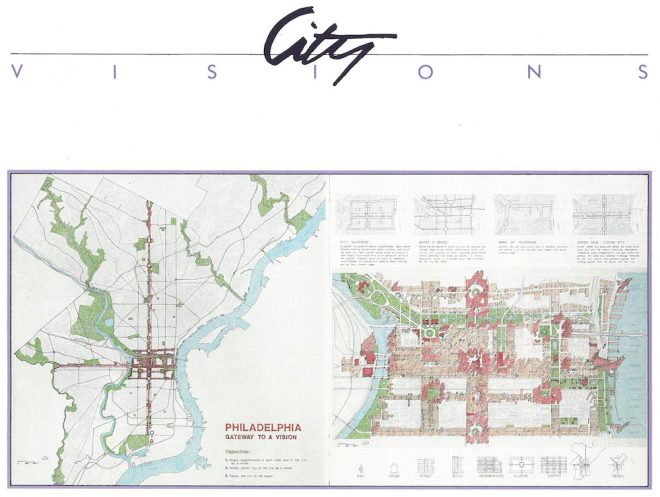 Thirty years ago, these five visions for transforming Philadelphia–some grandiose, others disarmingly simple–received the grand prizes in an ambitious design competition, City Visions, sponsored by Certainteed Corporation and Philadelphia’s Foundation for Architecture. The competition offered participants from around the world “an opportunity to dream and to create for Philadelphia’s future” and a chance to win $10,000 in prize money. The City Visions competition was wide open in more ways than one. Anyone with an idea for improving or transforming the city could submit an entry, not just design professionals. No concept was too outlandish. No idea was too simple. The point of the competition was not necessarily to generate ideas that were practical or even buildable, but rather to stimulate the urban imagination and expand Philadelphians’ sense of possibility.

In the spring of 1986, when the seven jurors for the City Visions competition gathered on the top floor of One Penn Square to review 211 entries from three countries and 22 states, Philadelphia had recently stretched the range of possibility on both sides of the spectrum. The year before, the grim unthinkable happened when Mayor Wilson Goode authorized police to drop a bomb on a middle class neighborhood on Osage Avenue resulting in an entire city block burning to the ground. That winter, possibilities abounded after ground broke at One Liberty Place, the first skyscraper to stray from the antiquated gentlemen’s agreement that no building shall rise above the crest of William Penn’s hat at City Hall. In 1986, there was no Vine Street Expressway, no Blue Route, no Schuylkill River Trail, no Center City District.

“There was a lot of trash on the streets,” recalls Leslie Gallery-Dilworth, who founded the Foundation for Architecture in 1979 to counter a prevalent pessimism about Philadelphia’s present and future. “There was this attitude that was very negative about the city and the downtown,” she says. “’It was the way it was and that’s how it was.’ I wanted people to start looking and thinking differently, to look at what could be done instead of what couldn’t be done.”

Gallery-Dilworth started the Foundation for Architecture to educate Philadelphians about aesthetics, to open their eyes to the architectural richness all around them, and to encourage them, once educated and aware, to advocate for design policies that could have a positive impact on the city and on their own lives. Her goal was to empower city residents to participate actively in creating and maintaining the built environment all around them. Through public forums, tours, and competitions like City Visions, the Foundation for Architecture encouraged the public, says Gallery-Dilworth, to “keep looking at what Philadelphia’s assets were, to approach everything from the perspective of a problem as a possibility, a problem as an opportunity, and to look at how we can make things happen.”

A major design competition was one way to make things happen. Gallery-Dilworth enlisted Certainteed, a building materials manufacturer and exporter, as their sponsor. The company provided $50,000 in prize money and funded the design and printing of a free, glossy catalog, public exhibitions at 30th Street Station and the Bourse, a traveling exhibition, and other competition expenses. She also assembled an impressive mix of local and international luminaries representing a range of design disciplines to serve as her jury.

I was there too in 1986, occupying the privileged position of professional “fly on the wall.” The Foundation for Architecture hired me, a relative newcomer to Philadelphia, to write the City Visions catalog. I had the pleasure of spending three days listening to and recording the jurors’ conversations, deliberations, and responses. The 211 entries ranged from the spectacular (Ian Cope’s winning proposal for a “Continuous Canal Joining Philadelphia’s Two Rivers”, for example) to the pragmatic (architect Richard Francis Brown‘s entry consisted of a single word: “Maintenance.”) Some proposals considered connectivity like winners Steven Heinz’ “Connections,” a transformative vision for regional rail stations, and Louise Schiller’s “Ribbon of Gold,” which proposed planting Black-eyed Susans to create a unifying visual link throughout the city. Others focused on specific sites, like reviving the historic, then dilapidated Ridge Avenue Market (alas, demolished due to neglect in 1997), or turning another problematic ruin at the time, Eastern State Penitentiary, into a luxury hotel on the model of Spain’s paradors. “It’s better than making it a museum of penology,” said Robert Campbell of the proposal in 1986 in what now seems like the least prescient of juror comments. He didn’t foresee how an interpretive museum could also be a potent advocate for prison reform like it is today. A few entries celebrated new ways of looking at or experiencing the city, like the hot air balloon rides proposed by Alina Wheeler and her team, designed to shift both attitudes and perspective.

A sample of City Visions winners and honorable mentions.

“The history of cities has illustrated that a plan, a design, the visual portrayal of an idea can be a major generating force to bring about change,” wrote Leslie Gallery and Foundation for Architecture Board of Trustees chair Paul Monaghan in the introduction to the City Visions catalog. When Thomas Hine, the architecture critic for The Philadelphia Inquirer, reviewed the competition he lamented that the entries were not bold or astonishing enough. “There was little about them that was visionary that had the quality of never having been thought about before,” wrote Hine. The island retreat of Patricia Kucker and Wesley Wei on the Delaware River, explicitly modeled after Smith and Windmill Islands–Victorian-era floating pleasure gardens on the Schulykill River–looked backwards rather than forwards, Hine asserted.

Deenah Loeb, at the time working at the Fairmount Park Art Association, remembers how the exhibition at 30th Street Station inspired her to think big. Loeb, now executive director of City Art Association, went on to establish the annual Art in the Open installation along the Schuylkill River Trail and Urban Voids, a design contest that was directly inspired by the 1986 competition. “City Visions, for me, really elevated the conversation of possibilities,” says Loeb. “The fact that it was in such a public place reinforced the idea that it was something that the organizers wanted to make sure was visible.”

Kucker, who entitled her and Wesley Wei’s winning entry, Nostalgia for Paradise, also disputes Hines’ assessment. The postmodern spirit of the time encouraged young architects to find inspiration and influence in the past. In designing their island paradise Kucker says she and Wei performed “a whole series of research into the history and culture and the values of the society at the time and then pushed it forward to a more contemporary edition.” Kucker found Philadelphia an especially inspiring city for a young architect because of its rich history. When she won the City Visions competition, Kucker says, “I was 20-something, and I was very idealistic and inspired by the potency of architecture. As a young architect, I walked through the city all the time. There are so many memorable streetscapes. I still remember what certain blocks are like, what the quality of the light was like.”

What is surprising, 30 years later, is how contemporary the five City Visions winners appear. The renderings themselves, all hand-drawn on standard size boards may evoke the 1980s, aesthetically and technologically. But the ideas themselves still seem fresh, because, in one form or another, they anticipate the city we live in now. We may not have a Venetian or even a San Antonio-style canal running through the city, but where Ian Cope envisioned in 1986 a waterway pouring through the underground City Branch portion of the Reading Viaduct, across town those same abandoned tracks will soon be filled with an elevated park instead. The playful spirit of Kucker and Wei’s floating island lives on at Spruce Harbor Park and the Schuylkill Banks Boardwalk. And swaths of yellow flowers do bloom in unexpected urban corners, wildflowers and grasses becoming, in the past 30 years, a prominent feature of the cityscape. 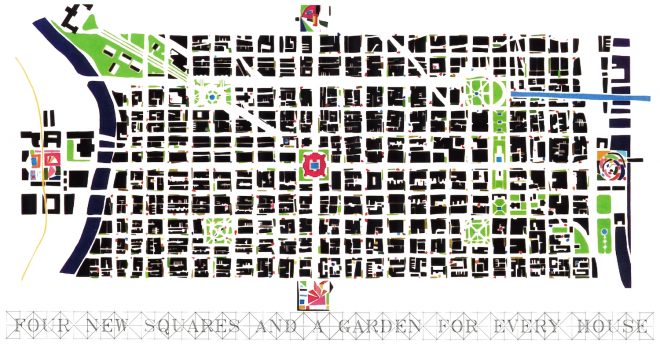 In fact, Princeton landscape designer Louise Schiller’s winning entry, “Ribbon of Gold,” elegant in its simplicity, may have had the largest impact of all. She captivated jurors with her undemanding, easily executed idea to connect the city by encouraging mass plantings of Rudbeckia, the stalwart perennial commonly known as Black-eyed Susans — and captivated the attention of the Philadelphia Horticultural Society as well, just as PHS was initiating its own Center City Green program. “We had just done a study of what we could do that would make an impact on Philadelphia’s public landscapes,” says Jane Pepper, longtime president of PHS. “To that end, we were intrigued by these yellow flowers.” With PHS support, “Ribbon of Gold” quickly became a reality. The flowers that still bloom today on the Spring Garden Street median, around Eastern State Penitentiary, and that brighten and soften the Sunoco oil fields along the 26th Street corridor that leads to and from the airport, all owe their origin to City Visions.

What strikes Bach today as particularly visionary was the theme of connectivity. Speaking about Cope’s canal design, Schiller’s “Ribbon of Gold,” and Heinz’s emphasis on transportation systems and the potential of regional rail “nodes”, she notes that the winners of the City Visions competition all shared a desire to link one part of Philadelphia with another by “thinking about how to connect the city in a special way.”

For his part, Cope, now Partner and Managing Principal of Cope Linder Architects, would like to see young architects have some of the same opportunities to experiment with visionary thinking as he and his co-competitors did 30 years ago. “A lot of great ideas, large and small, but also implementable, came out of City Visions,” he says. “It brought out the best of our homegrown roots. You could see that homegrown knowledge was latent there and City Visions brought those ideas out. With a modest expenditure and some good PR, [a competition like City Visions] can generate a lot of good ideas. It really takes only one or two to generate a profound change.”

That “profound change” doesn’t usually happen overnight. The Foundation of Architecture shut its doors at the end of 2001, yet we live with its legacy. Many other organizations, including this one, have taken on the role of advocate and educator, championing Philadelphia’s built environment, its rich history and exciting potential. Ideas presented today take seed in people’s minds and imaginations, to flourish later in sometimes surprising ways. “People think about these things,” Patricia Kucker, who this fall returns to Philadelphia in the role of Provost at University of the Arts, observes, “It takes a while before they become part of the public consciousness.”

But, she adds, “Building the public conscious for these kinds of futures is really, really important.” And 30 years later, that may be City Visions most enduring lesson.