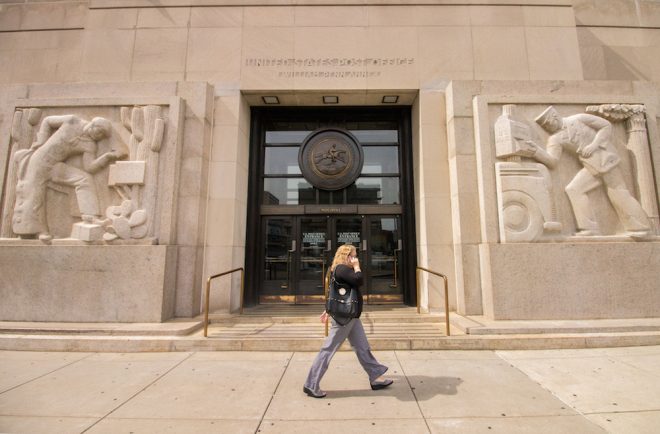 It was a gloomy day two weeks ago when the U.S. Postal Service announced that it will close the William Penn Annex Post Office to customers later this year and relocate operations to the Cast Iron Building at 718 Arch Street. The Moderne-style building at 900 Market Street, a National Historic Landmark since 1990, will continue to house the Robert N. C. Nix Federal Courthouse and is in no imminent peril of being torn down. But the slim eastern section dedicated to mail service, a sleek and shiny high-ceilinged corridor accented with Art Deco trimmings, will no longer serve the function for which it was so intelligently and dynamically designed.  The closure of the post office highlights a disturbing trend: the ongoing degradation of customer experience as the quality of public interior architecture declines.

When the William Penn Annex Post Office first opened in 1937 the U.S. Postal Service was a finely-tuned, omnipresent communications network. In that year alone, the post office moved 25,801,279,00 pieces of mail across the country and around the world. Like public libraries and banks, post offices held a prominent position in every American city, town, village, or rural outpost. They served as the public’s portal—the user interface, as it were—that plugged U.S. citizens into this speedy, boundless transcontinental system. This particular portal on 9th Street, designed by Philadelphia architect Harry Sternfeld for the Ballinger Company, articulated and abetted that high-speed efficiency with elegance and grace, both inside and out. 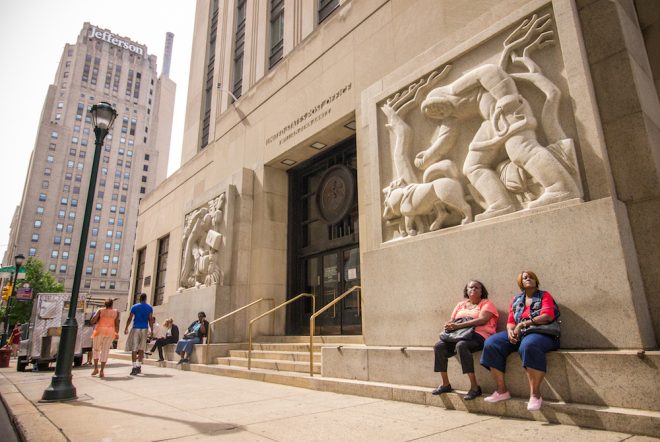 At 9th and Chestnut Streets the sleek annex zips up against and under the solid, reassuring bulk of the steel and poured concrete courthouse like a train making a quick stop on its way out of town. The subtle, rounded corner evokes the streamlined nose of Pennsylvania Railroad’s S1 locomotive, which was making its debut over at 30th Street Station around the same time that the post office opened. But the reach and efficiency of the postal service depends on more than just machines, as Edmond Amateis’ four bas reliefs set in pink Milford granite and Indiana limestone on the 9th Street façade make clear. Depicted in the reliefs—North, South, East, and West—are four heroically muscular mailmen from the far reaches of North America delivering heavy loads in their regional garb, demonstrating that neither igloo nor cactus nor hefty haul of bananas can keep the postman from his daily rounds.

The interior is just as dynamic. A cadenced staccato of vertical lines—windows, columns, and service bays—plays against the glissando of long, shiny horizontals. The polished floor, gold-specked ceiling, and a black glass writing desk run the length of the building on one long continuous surface under the high, sunlit windows. The design is understated in performing its function, guiding customers through lines and to the appropriate service window. But here, form doesn’t merely follow function, it choreographs it. The long, slender dimensions and glossy surfaces encourage customers to glide glide dreamily through the minimalist space, senses attuned.. 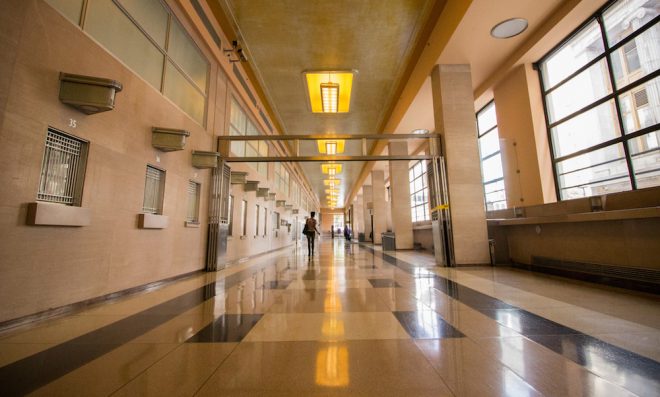 A sign of the times. Out of more than 45 postal service windows, only two are open on a typical weekday afternoon. | Photo: Michael Bixler

Sound is a factor as well. The high ceiling at once absorbs and amplifies conversation and movement. Spoken words are carried skyward into a genial hum that hovers like a cloud, while the click of footsteps on those polished floors resounds across the lofty walls of the small, slick canyon. Engaging eye and ear, the architecture of this Machine Age gem once elevated the mundane transactions of mailing packages or buying stamps into something civilized, dignified, and delightful.

How this building must have pulsed in its heyday, with the lights above those 42 aluminum-framed service windows flashing and their bells beckoning the next customer in line to move forward! Even now, with the building nearly empty of both customers and postal workers, and the lines moving at glacial speed, the high black-mullioned windows frame pedestrians as they move along the sidewalk, transforming the outside life of the street into animated urban cinema. One can imagine what that ever-looping film reel must have looked like when Market East was lined with department stores and shoppers streamed in and out of Strawbridge’s and Gimbel’s across the street.

The Decline of Place in Public Life

In this age of an ailing “snail mail” system, the rhythms of this once fast-paced, dynamic mailing machine have slowed to a stupor. The post office is often mostly vacant, and the wait is always long. Rarely do more than two of the triangular lights above those 42 chrome-framed windows flash. But waiting in line compels the 21st century customer to appreciate the building’s design, to contemplate the clever geometry and elegant proportions, even though the zing and flash of a noontime crush has been replaced by a church-like hush. 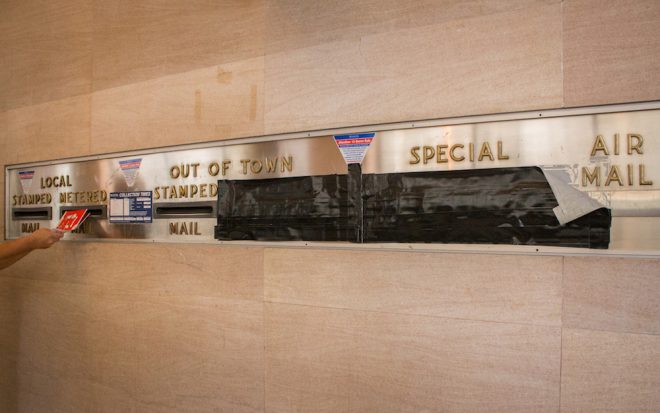 Like typewriters, cassette tape players, and landline telephones, post offices have become nearly obsolete, a vestige of waning technology. Enriching experiences as exemplified by the William Penn Annex are becoming obsolete as well, heralding the death of energetic, utilitarian architecture and the prominent role it once played in public life.

Not all that long ago architecture’s most vital function was to shape and inspire our shared, public spaces. Banks, libraries, courthouses, train stations, schools, and post offices were all designed with an attention to proportion, detail, and a sensitivity to movement. Everyday commerce offered a succession of uplifting and enlivening experiences that are largely gone from contemporary life. Today, most quotidian errands take place inside interchangeable boxes. Often enough, post offices, banks, and retail stores inhabit joyless, generic spaces governed by moveable placards, room dividers, and two dimensional foam core displays. The shabbiness of modern commercial transactions leaves one wandering the aisles in morose complacency. 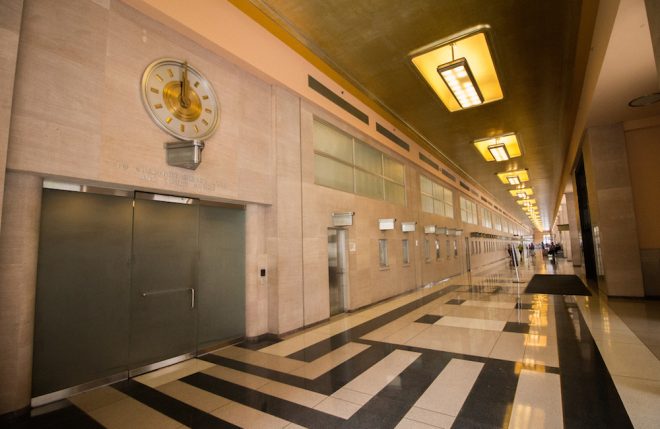 An Art Deco clock still keeps time above doors to the Federal courthouse. The service wall in the hallway of the post office resembles train cars speeding towards Market Street. | Photo: Michael Bixler

For those who argue that great architecture is a luxury, who associate the word with sumptuous (read: unaffordable) materials, fussy construction methods, and precious, aesthetic tricks, the post office at 9th and Chestnut offers a rebuttal. Built by the Work Progress Administration at the end of the Great Depression, this is a building that is both populist and minimal, yet delivers lots of bang for the buck. The interior designers delighted in incorporating commonplace materials like chrome, glass, and aluminum for dazzling effect. The spangly gold ceiling, for instance, is coated with aluminum leaf, essentially radiator paint. The beauty of the building lies not in its grandeur, but in its intelligence. The proportions, the geometric patterns, the juxtaposition of materials, show a human mind at work and is the source of the building’s dignity and humanity, its uplift and inspiration. We may no longer need the William Penn Annex Post Office to complete our daily rounds, but we could surely use the distinctive, stimulating generosity it once provided.