On Sleepy Richmond Street, A Spark Of Renewal Catches Wind 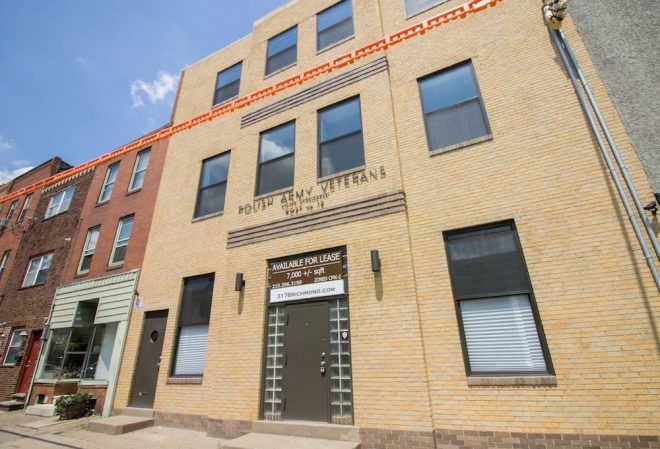 “Vibrant” is not a word most would use to describe Richmond Street. The beauty and bustle of the once-thriving Polish commercial district is but a faint whisper speaking softly of its former glory in empty storefronts and tiled entryways. In the last two decades life has slowly drained out of the historic immigrant corridor as family-owned florists and Polish-language publishers closed for good and a sleepy stasis began to set in. Today, Richmond Street is pretty limited as far as destinations go and is still mostly defined by a trip to Krakus Market for babka and smoked kielbasa, galumpki at Syrenka Luncheonette, and Sunday afternoon strolls around Port Richmond Books. But the cycle of urban decline moves in perpetua and eventually seeds of life begin to germinate again. For Bob Metry, owner of the old the Polish Army Veterans Post No. 12, and Joe Livewell, the mind behind River Wards Cafe, laying the groundwork to reenergize the street has begun with foresight, developing a solid relationship with neighbors, and patience.

The sprawling marble bar counter inside of the old Polish Veterans hall at 3178 Richmond Street is 20 feet long and dead empty. Not a bottle of booze nor a drinking stool can be found. Across the room a handmade global map of Polish Catholic churches, schools, and hospitals sits brittle and askew to the left of an old bandstand now occupied by an industrial kitchen sink. Upstairs in the ballroom a dusty Cunningham piano keeps company with tawny wood paneling and a dropped ceiling suspension grid. All is quiet in the former veterans hall today, but the residue of Polish pride and celebration remains.

Before Metry, president of RJM Property Group, bought the hall in 2015, the building was home to the Philadelphia chapter of the Polish Army Veterans Association for over half a century. The PAVA, part Polish militia-on-reserve, part neighborhood social club, held parties, dances, wedding receptions, Polish Soldier’s Day festivities, and a host of other community events at 3178 Richmond Street. In its halcyon days the hall was a hive of activity and a linchpin of neighborhood fellowship.

The origins of the PAVA began in 1917 during World War I when the United States sent 24,000 Polish American volunteers to join allied forces on the Western Front and the Polish Legions in France. The “Blue Army” was later transferred to military units in Poland fighting for the return of Poland’s independence. 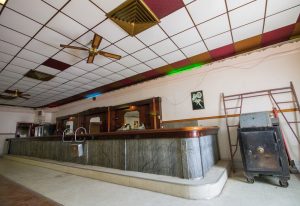 A great bar is a terrible thing to waste. Inside the PAV Post 12. | Photo: Michael Bixler

During World War II, the United States and Canada dispatched more than 20,000 volunteers to aid the Polish Army in France after Poland fell to German forces. When Germany invaded France, Polish commander-in-chief general Władysław Sikorski and his 85,000-soldier army fought in the southern sector of the front lines, with main military camps positioned in Coëtquidan and Parthenay. Undeterred, the Polish Army continued to fight in France as an ally of the United Kingdom well after French prime minister Philippe Pétain announced an armistice with Germany and demobilization of military units in June 1940.

Lucjan Chwalkowski, a Polish émigré from New York City who was the first volunteer to be killed during World War I in France, is immortalized in chrome lettering on the yellow brick front of Polish Army Veterans Post No. 12.

Metry bought the three-story, 7,040 square foot hall last September and immediately began working to restore the façade, a priority met with approval and praise from neighbors and local passersby. Metry was drawn to the veterans hall for its historic appeal, solid bones, and adaptability. The building is big (7,000 square feet) and zoned CMX-2, making it ideal to house a variety of businesses. “We are open to tenant type, but think the space would be perfect for a group looking for a statement building.” Metry adds that its restored yellow brick façade possesses “great street presence” and its “loft-like” floor plans enable flexibility. The ideal tenant would be a co-working collective or creative agency, says Metry, but he hasn’t ruled out a ground floor bar or restaurant, with offices for tech, educational, and medical services filling up the top two floors. “We had a video agency that was considering it and liked the idea of keeping the first floor bar setup as-is,” he says. “They wanted to have a kitschy feel for their staff and clients with workers setting up laptops on the bar and having a coffee and liquor bar on hand.”

It’s easy and enchanting to see the potential of Richmond Street. The dormant vitality reveals itself as you walk the full stretch from Allegheny Avenue to E. Ann Street. Eclectic, empty storefronts abound, with a whopping 21 shops sitting vacant or currently being used for apartment rental space. In 2017 PennDOT, in conjunction with the 95 Revive project, will begin phasing in capital improvements along the corridor by installing trolley tracks and pedestrian lighting, widening the street for easier parking and better travel lanes, replacing old utilities, and planting trees. And as housing prices in Fishtown continue to soar, the close proximity of Port Richmond is becoming an increasingly attractive alternative for first-time buyers and renters in need of bigger space.

“I started hearing more and more stories of artists, makers, and young folks moving to Port Richmond in part because of it being cheaper than Fishtown, but still close to the action,” says Metry. “I was particularly drawn to Richmond Street because it historically served as the main commercial corridor, has great buildings and lots of vacancies, which is an opportunity for investors and merchants to reenergize the street.” 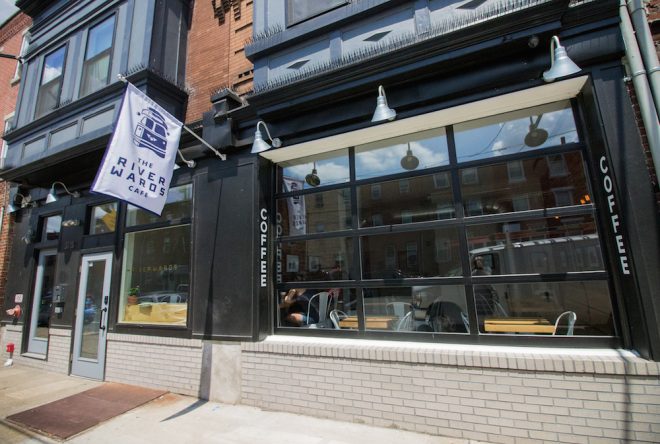 Joe Livewell and development firm River Wards Group transformed a former furniture manufacturer on Richmond Street into one of the city’s more attractive new cafes with hopes of igniting a revival along the thoroughfare.| Photo: Michael Bixler

Joe Livewell over at River Wards Café echoes a similar sentiment. Born and raised in Fishtown, Livewell and real estate developer Laurence McKnight of Riverwards Group opened the coffee shop at 3118 Richmond Street in March, recognizing the pivotal role cafés play in neighborhood revitalization. The strategy is nothing new and has proven to be a winning formula in a number of instances like the old Mugshots in Fairmount, Ultimo in Point Breeze, and, most recently, ReAnimator Coffee in South Kensington where Livewell, a former bond trader, learned the barista ropes and witnessed the phenomena first hand.

For two years he worked on refining brand identity and a business plan for the café while converting the former furniture manufacturer space into an airy, glass garage door fronted community hub. “I picked this building in particular because I loved the idea of turning an old, recognizable building on the street into a coffee shop rather than build something new,” says Livewell.

Livewell’s approach seems to be working. After seeing the renovations at the café, a few of the owners of the empty storefronts stop by often to talk about potential ideas for reusing their own properties. He says that the café has stirred inspiration and seems to be renewing a sense of pride along the street, with a fresh coat of paint and other exterior improvements popping up every other week. “Some people ask me ‘Are you trying to change the neighborhood?’ No. I’m trying to build community, bring back business gradually, and return Richmond Street to its prime.”

A sampling of Richmond Street storefronts.

The momentum behind the real estate market in the neighborhood is steadily gaining steam. The development firm River Wards Group, which is currently building out pockets of Port Richmond like Cambria Court, a 12-unit luxury condominium development, is moving into its new offices at 3020 Richmond Street next week. Down the way at 3029 and 3044 Richmond Street the firm is currently working on four new townhouses and seven apartment units with more new construction and rehab projects along the corridor not far behind. A few blocks away on Salmon Street Maryland developer Concordia Group, the firm behind the demolition and redevelopment of Mt. Sinai Hospital in South Philly, is getting closer to completing an agreement to purchase Charles Carroll High School, which closed in 2013.

As far as new businesses go, Joe Beckham, owner of Fishtown taco joint Loco Pez, just opened Bait & Switch Seafood Bar at Belgrade and Somerset in June, and both Breathing Room Yoga and Rebel Rebel hair salon have set up shop along Richmond Street in the past 12 months. “You just can’t do this in Fishtown and South Kensington any more,” says Metry. “I think one key driver will be getting more good commercial operators opening businesses, especially bars and restaurants. It has all the makings of being the next great neighborhood.”