In Germantown, The Work Of Henry Houston Lives On 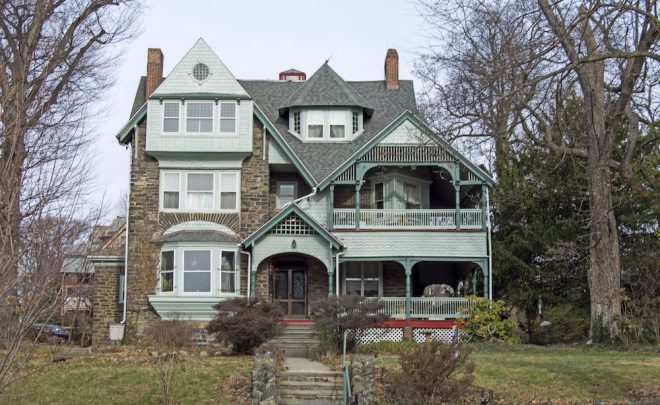 The stretch of Wayne Avenue that runs roughly east to west between Rittenhouse Street and Washington Lane in Germantown features one of Philadelphia’s greatest pockets of Queen Anne and late-Victorian homes. Down perpendicular streets Tulpehocken, Walnut, and Harvey, additional examples of Italianate, Second Empire, Gothic and Tudor Revival houses complete what is undoubtedly one of the city’s most architecturally diverse neighborhoods. The area, typically referred to as Tulpehocken, was added to the National Register of Historic Places as an historic district in 1985. The neighborhood derives its name from the SEPTA Regional Rail train station located along the Chestnut Hill West Line. The station was established in 1884 when the Philadelphia Germantown & Chestnut Hill Railroad was a subsidiary branch of the Pennsylvania Railroad Company. When the line was extended through northwest Philadelphia it brought with it community planning developer Henry H. Houston and a second wave of suburban growth.

Henry Houston was a general freight agent of the Pennsylvania Railroad during the Civil War and was a member of the company’s prestigious board of directors and deeply influential in growing the Pennsylvania Railroad during and after the Civil War. His real estate holdings in Germantown evolved over two decades, representing the transformation of a community with an historic, architectural presence that is largely intact today.

Houston’s Germantown properties were centered on Wayne Avenue, bound to the east by Rittenhouse Street, and the west by Washington Lane. Beyond this main corridor, Houston-owned land extended south toward Wissahickon Avenue, bordering land owned by descendants of the storied Rittenhouse family and George Thomas (for whom Thomas Mansion at 6245 Wissahickon Avenue is named). A comparison of historic atlases spanning the era of Houston’s residency in Germantown shows a decade-by-decade increase in real estate activity between 1860 and 1890. Pairing these atlases with transactions listed in Houston’s personal deed books and PRR records, reveals Houston’s significance. As his wealth grew and his navigation of Philadelphia’s upper-class echelon progressed, his portfolio of investments in oil, gold, and land proliferated, enabling a man with a high aptitude for logistical organization to bridge transportation success and community planning. Houston’s plan was simple and brilliant: first acquire land, then influence the extension of a commuter railroad through that land, and, finally, construct high-quality housing on lots adjacent to rail stations. 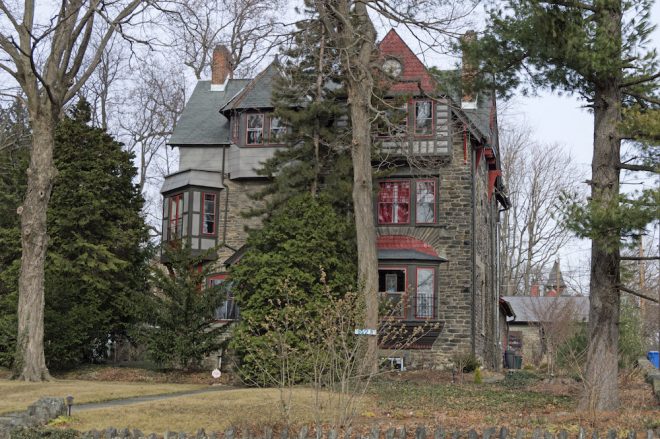 In the summer of 1860, Houston, his wife, Sallie, and young son moved from the city’s center to 223 W. Tulpehocken Street, an Italianate twin they rented over the next two-and-a-half years. In 1863, Houston and his family moved into a different Italianate villa, at 9 W. Tulpehocken Street, where they resided for 23 years. (The property remained in the possession of Houston’s extended family until 1922 when it was sold to developers who demolished the villa and subdivided the then 1.5 acre parcel into twenty-plus lots.) During his first 16 years at 9 W. Tulpehocken Street, Houston acquired roughly half the land he eventually held title to in Germantown. He began by acquiring vacant parcels and largely undeveloped land along and to the south of Wayne Avenue in 1865, a pattern that continued through the mid-1880s. He also purchased the former land holdings of the then-defunct Germantown Water Company, whose main infrastructure was located around the intersection of W. Tulpehocken Street and Wayne Avenue. As Houston’s portfolio expanded, he maximized his estate’s position along the southward sloping topography to oversee what was becoming his domain within the Wissahickon Valley.

Houston continued to acquire property despite the economic depression of 1873. He provided financing to the Episcopal diocese for the construction of St. Peter’s Episcopal Church on land Houston owned at Wayne Avenue and Harvey Street. Houston chose the firm of Frank Furness and G.W. Hewitt to design the church, completed in 1874, and served as Rector’s Warden of the church until his death in 1895. 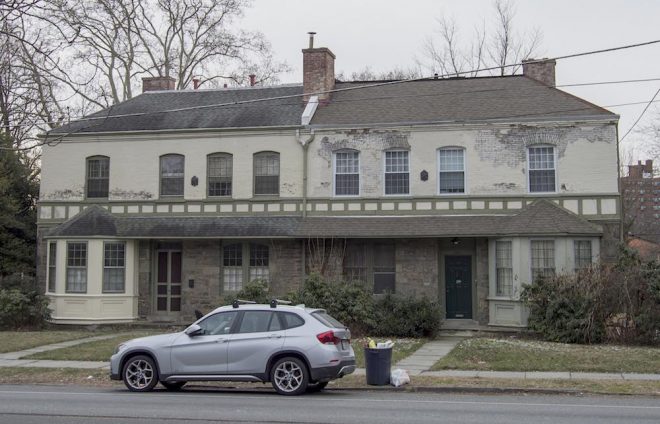 One of six twins Houston built in 1834 along the south side of Wayne Avenue between W. Rittenhouse and Harvey Streets. These twins were the most restrained of G. W. & W. D. Hewitt’s contributions to Houston’s portfolio of rental properties. Octagonal bay windows and incorporation of local Wissahickon schist stone found their way into subsequent Hewitt designs for Houston. Originally all 6 of these cottages were 2 1/2 stories in height. | Photo: Joshua Bevan

Houston’s investment in the community he lived in, as evidenced by the establishment of St. Peter’s and his role as a landlord beginning in the early 1880s, separated him from being purely a speculative developer, who perhaps would otherwise have acquired land, constructed housing or other improvements, and then sold hoping for a quick profit. Instead, Houston leased properties to personally selected tenants in order to maintain the character of his Germantown development over the course of several decades. It was during 1850 to 1900 that neighborhoods throughout Germantown joined the broader trend of suburban expansion, which ultimately reshaped the city and the region. Architecture and community development both factored into the sense of place of the neighborhood Houston was creating and simultaneously residing in.

Five years after the establishment of St. Peter’s Church, Houston, and a covert contingent of attorneys, conveyancers, and real estate agents–including Houston’s own brother in-law–initiated what became one of the largest land grabs in the city’s history–over 3,000 acres within the city limits–turning the railroad magnate’s wealth derived from speculative investment into wealth manifested in land ownership. Prior to 1884, most of the expansive acreage acquired was farmland. Houston then used his influence within the Philadelphia transportation sphere to ensure the extension of the PRR’s Philadelphia Germantown & Chestnut Hill Railroad line, today SEPTA’s Chestnut Hill West line, through land he owned in Germantown and Chestnut Hill. In 1881, “A Petition to Demonstrate Support for the Proposed Extension of Rail Service to Phoenixville through Germantown, and Chestnut Hill,” circulated among the owners of property along the rail’s proposed right-of-way and neighboring streets. The petition was most likely initiated by Houston. 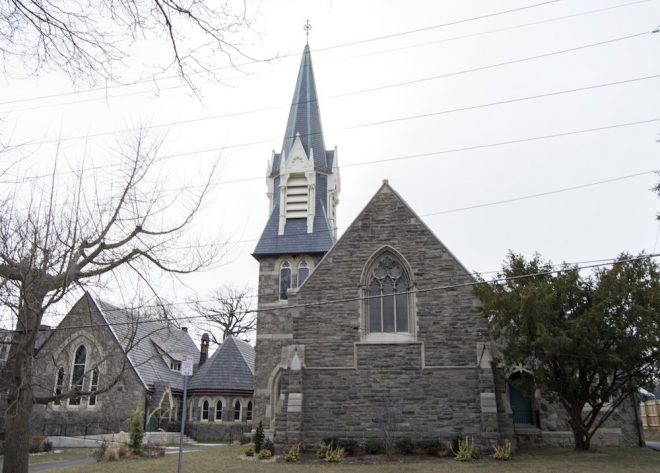 St. Peter’s Episcopal Church, now the Waldorf School. The only property with association to Houston’s development on both local and national historic registers. Designed by Furness & Hewitt. | Photo: Joshua Bevan

With a critical mass of residents eager for a new rail line, acquisition of parcels subject to right-of-way damages became a priority for Houston. Once properties were obtained, he had to allow the PRR to run its proposed route through his property, which he accomplished through the donation of right-of-ways, which were donated on paper in October of 1884, three months after the branch’s inaugural run.

When it came time to build on the many parcels acquired between 1865 and 1884, Houston relied on the venerable architectural firm of Hewitt and Hewitt to design his Germantown housing, just as he did in Wissahickon Heights where the Hewitt brothers designed at least 80 dwellings, some with striking similarity to those in Germantown. Brothers George and William Hewitt’s previous work with Frank Furness on St. Peter’s Episcopal may have been the impetus for the formation of the Houston-Hewitt commission relationship that resulted in the Anglo-centric aesthetic seen in Houston’s properties. Their partnership is firmly established in buildings like the Wissahickon Inn, Houston’s Wissahickon Heights mansion, the Druim Moir estate in Chestnut Hill, St. Martin-in-Fields Church, and many others.

Although Houston’s vision for the neighborhoods he developed was never officially plotted on paper beyond a few surviving deed maps of Chestnut Hill, what is evident from the remaining buildings is that Houston favored a variety of housing types for potential tenants of varying economic stature. From single-detached to semi-detached houses, with a variety of footprints, Houston’s properties created residential opportunities in what was surely a desirable, if not exclusive Germantown neighborhood in the mid-1880s. These dwellings designed by the Hewitt brothers infused the neighborhood with an emerging architectural vocabulary, signaling a rise in popularity of the Queen Anne style after its introduction to Philadelphia during the 1876 Centennial Exposition. Houston’s houses in Germantown, linked together by material and style, also signaled to prospective tenants and potential buyers that the neighborhood provided high-quality housing and the advantages of rail connection for traveling between Center City and beyond. 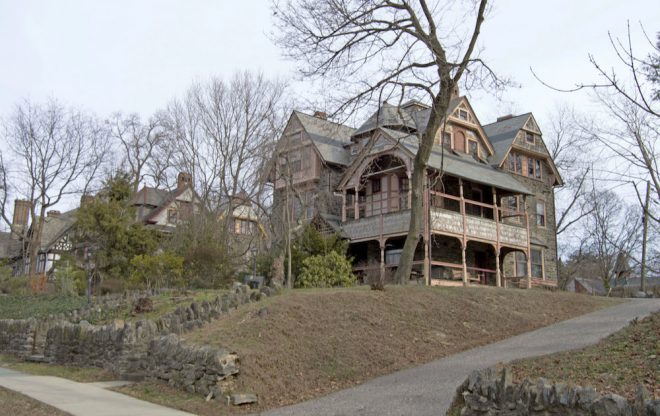 266 W. Tulpehocken Street. Built 1886. Designed by G. W. & W. D. Hewitt. Houston’s high-end homes were located at the highest elevation of all the houses he commissioned in Germantown, while being within eyeshot of Tulpehocken Station. Stacked and balustraded porches, dormers piercing through hipped roofs, and complex gable arrangements along secondary elevations made these homes attractive from several approaching perspectives. | Photo: Joshua Bevan

The transformation of the neighborhood in the years leading up to and immediately after the extension of the PGCH rail line was acknowledged in the National Register District designation. After an update to the nomination in 2001, the district still did not include any Houston-commissioned buildings east of Harvey Street as either contributing or significant. Even if the narrative of Houston’s role in bringing the railroad through was removed, there would still be over 40 houses designed by the same architect with a notable significance in Philadelphia in the late 19th century. A Houston-Hewitt Historic Residential District could stand on its own.

Largely well-maintained save for a missing bracket under a cornice, some shingles in need of replacement, and peeling paint, Houston’s Germantown development endures largely under the radar. Most of the buildings in the Tulpehocken section are not listed on the Philadelphia Register of Historic Places, leaving an exceedingly rare collection of thematically-connected, late 19th century homes vulnerable to redevelopment.