Germantown Neighbors Wary But Hopeful Over Plans For Abandoned St. Francis Of Assisi 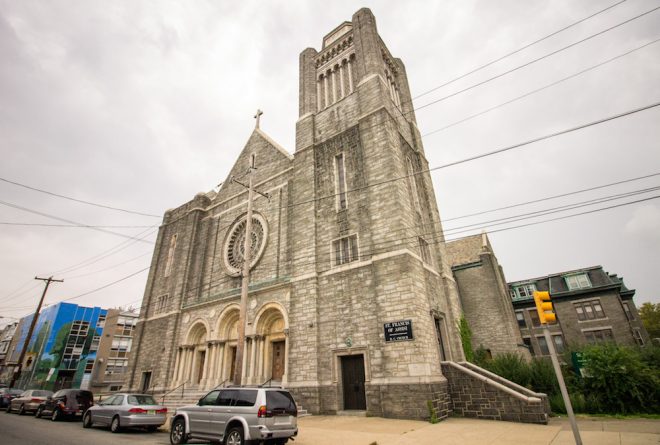 St. Francis of Assisi Catholic Church closed in 2012 after 113 years of community and worship service. It has since been subject to theft, vandalism, and fire. Independent Mission Schools is purchasing the church from the Archdiocese of Philadelphia to expand DePaul Catholic School next door. | Photo: Michael Bixler

After four years of vacancy, vandalism, and maintenance neglect, the St. Francis of Assisi Church at 4821 Greene Street in Germantown may have new life. The century-old Germantown landmark designed by ecclesiastic architect Francis F. Durang will be reused as an extension of the DePaul Catholic School, located across the street from St. Francis. Deacon Thomas Croke, director of property services for the Archdiocese of Philadelphia, confirmed that the property is being sold to Independent Mission Schools, the nonprofit organization that manages DePaul. According to Croke, DePaul will likely use the spacious facilities at St. Francis as an auditorium, a gymnasium, or a multi-purpose recreation center.

“We have a lot of great ideas about how this new space will allow us to enrich our academic program, strengthen our Catholic identity, and bring our community of staff, families, and students together,” said DePaul principal Katie Wardlow. “ In the upcoming months, we will be working with our stakeholders to determine how to best use this additional space in service of our kids and our community.”

This is good news, not only for the DePaul School, but for the historic church building that closed its doors in June 2012 after holding a final mass to celebrate over a century of Catholic service. Founded in 1899, the South Germantown church was used by parishioners for 113 years. A declining population of Catholics in the neighborhood forced St. Francis to merge its congregation with St. Vincent de Paul Parish in Northwest Germantown. 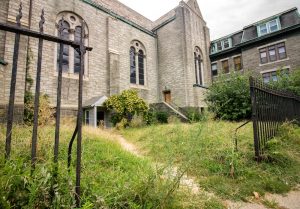 Lack of maintenance on the grounds of St. Francis has left the church vulnerable to crime and has become a blight on the neighborhood. | Photo: Michael Bixler

In the years following its closure, St. Francis has fallen victim to crime, litter, and disrepair. Weeds and tall grass thrive on the unmaintained property. The sidewalk along the grounds has become a dumping ground for those looking to unload an old couch or two. But most troubling to neighbors is the illegal activity that the empty building attracts. Abandoned buildings, particularly one this large and unsupervised are a crime magnet and a shield from the police.

In February 2013, just months after St. Francis’ last mass, two separate burglaries were reported at the parish. A reported $65,000 of religious artwork was stolen from the church. The following November a fire broke out in the building. Firefighters quickly extinguished the blaze and no one was injured, but more reported break-ins followed the incident. Gun violence is a problem as well. At least three violent shootings have been reported in the immediate vicinity of St. Francis since its closure.

“This isn’t a perfect neighborhood,” said Emaleigh Doley, a neighbor and community organizer at Germantown United CDC. “All of these issues can be seen as problems throughout the area. But when you have a massive vacant property like this sitting within a residential area, you’re bound to have an increase in these problems.”

Emaleigh Doley and her sister, Aine, have been following St. Francis’ descent into dereliction since the church first closed. Although they were never members of the congregation, the sisters are community leaders who represent the West Rockland Street Neighbors Association and have a stake in the present state and future use of the church. Over the course of the last four years they have repeatedly asked the the Archdiocese to increase maintenance and security. The church, they say, has become a blight on the neighborhood.

The importance of maintenance on abandoned properties has been a topic of study in the academic community for years, dating back to 1982 when James Wilson and George Kelling introduced the broken windows theory. 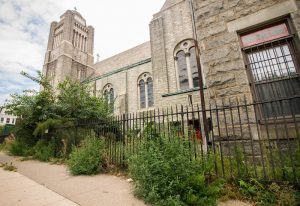 The reasons for this reduction are varied, according to Branas. Not only do abandoned buildings provide cover for illegal activity, they also bring down the general mindset of the community, making residents feel helpless in terms of improving their neighborhood. The increased maintenance of abandoned properties can help alleviate some of these problems.

“Even simple fixes like graffiti removal and replacing dilapidated plywood window coverings with real, glass windows can have a big effect,” said Branas. “Real windows look cleaner, suggest that someone lives there and is looking out on the street. They allow passersby and neighbors to see in and make noise if shattered, thereby discouraging illegal activity from entering the abandoned building in the first place.”

Full occupancy will help address the problems that Branas and the Doley sisters are outlining. However, the reopening of the building is still many months away and the Doleys are skeptical that DePaul School will take on the influential, neighborly role that St. Francis used to play in their community. Aine views the acquisition of the building by DePaul as good and bad news. “They don’t take care of their property on our [the W. Rockland] side of the block,” she said.

Emaleigh remembers St. Francis when it was active as a community center. It was her polling location and she remembers seeing all of her neighbors there on election days. When Emaleigh began her work as a community activist she used the church space to host meetings with her neighbors. “The priests that lived in the rectory, they were also our neighbors, they were a part of our community,” she said. 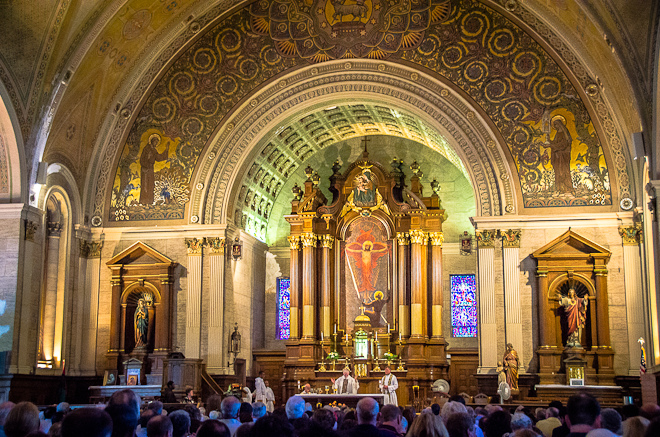 “The striking image of the church itself was its people,” said Father Gene Sheridan, pastor at St. Francis from 2007 until its closure. Sheridan recalls working closely with the DePaul School during his tenure. “I tried to make the school part of my everyday activity,” he said, “spending time with the parents before and after class. I would visit classes, teach a religion lesson at times, and eventually put on a play, ‘Harry Potter and the Bible,’ performed by the eighth graders in the church.”

Quality-of-life began to deteriorate on West Rockland Street during the foreclosure crisis in 2008. People lost their homes and left the neighborhood. Vacant lots already full of trash and debris were subject to an increase in illegal dumping. So the Doley sisters started organizing block cleanups and garden plantings. The church provided volunteers for these service projects. “We had college students coming in from six different states,” said Emaleigh. “When St. Francis closed, not only did the congregation lose its church, the community lost its anchor.”

“I hope they want to be a good neighbor, to live in the community,” Emaleigh said of the DePaul School. “I expect more from the people who manage this property. They need to be more responsible.”