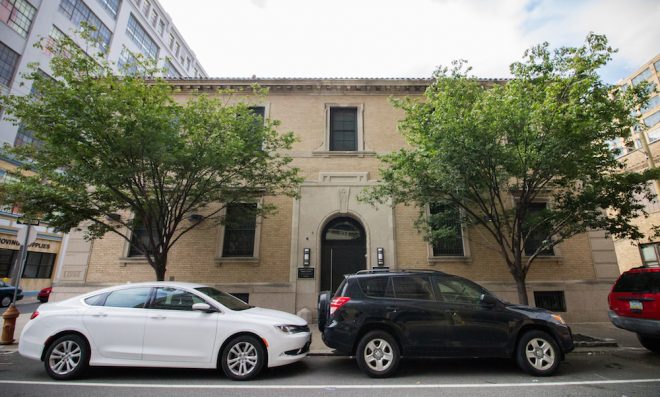 The former City Morgue at 13th and Wood Streets, now being used as an annex of Roman Catholic High School. Director David Lynch lived across the street in the 1960s and credits the morgue as a lasting inspiration to his inimitable style. | Photo: Michael Bixler

The word “morgue” in its original meaning was used to describe the entrance of a prison where unidentified prisoners were displayed to the public with the hope that someone would be able to place names to their faces. Eventually, dead bodies started to be placed there as well with the same goal. In 1804, Chatelet Prison in Paris was the first to move the deceased to their own designated building for this purpose, and other cities around the world quickly followed suit.

In Philadelphia, the first building used to store unidentified bodies was a greenhouse located in a potter’s field on what is now the 900 block of Lombard Street. City government finally arranged for the construction of an official city morgue in 1870. The building was hastily built on a small plot of city-owned land at the northwest corner of Noble and Beach Streets, now the middle of a sea of storage bins on the waterfront. The new morgue featured an exhibit hall, a residence for the superintendent, the City Coroner’s office, storage rooms for personal effects of the deceased, and private rooms for bodies identified by relatives and awaiting removal.

The superintendent’s job required around-the-clock availability to receive bodies and record, photograph, and display them, then keep detailed records of the clothes and personal items of each corpse. Unidentified bodies were displayed in the exhibition hall for 72 hours, then buried. Their clothes were displayed for 20 days then stored for one year thereafter. 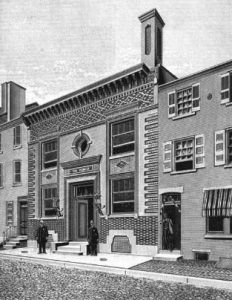 In 1883, Oscar Coleman De Wolf, Chicago’s commissioner of health, toured morgues around the country, remarking that Philadelphia’s morgue was without a doubt the worst he had ever seen. Others complained about it as well. Its location between a fleet of freight train lines on the riverfront made it inconvenient and unpleasant to reach. Rumors of morgue workers selling cadavers to the University of Pennsylvania didn’t help matters. In 1890, City Council finally acknowledged the need for a modernized morgue in a more centralized location.

The City sold the Beach and Noble property to Gordon Chambers, head of Philadelphia & Reading Railroad’s Real Estate Department, for $47,500, who demolished the building and filled in the site with more train tracks. Council charged city architect James Hamilton Windrim with designing a state-of-the-art facility that could accommodate the needs of a rapidly-growing city.

The City’s new morgue, built at 1307-09 Wood Street, opened on July 1st 1894. Windrim’s façade design displayed a delightful array of textures and patterns. The facility’s refrigeration plant, manufactured by York Manufacturing Company, Ltd, was so advanced that refrigeration experts came from all around the country to see it in operation. The cooler’s design was compact and only took up a 3′ x 7′ section of the basement. It had a minimum of moving parts, and yet was capable of producing a level of cold equal to three tons of ice.

Every possible finish was ornamented. The walls were decorated top to bottom with decorative tiles and even the electrical switchboard was set in marble.

The new morgue, modeled after one just built in Berlin, brought bodies in through the rear on Carlton Street and into a courtyard that was behind a tall brick wall meant to prevent looky-loos from trying to get a glimpse of the cadavers. Bodies placed on display were not placed out in the open, but rather in sunken sections of the Viewing Room floor where they lay behind glass. The morgue—in addition to the superintendent’s office, morgue-keepers room, and autopsy rooms—had its own funeral parlor available for impoverished families to use. 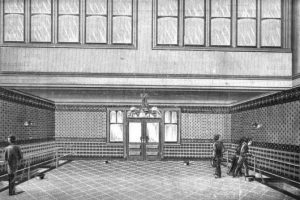 In 1902 the facility was upgraded with incandescent lamps and in 1905 an eight-ton, $6,000 refrigeration machine was installed. Nonetheless, it was proven inadequate by 1918, when the Spanish Flu epidemic wreaked havoc on Philadelphia. Unidentified bodies became so abundant that they had to be stacked on top of each other in the Viewing Room four and five bodies deep.

The facility has served as a lasting inspiration to acclaimed film director David Lynch, who lived catercorner from the building in a house near the southeast corner of 13th and Wood when he attend the Pennsylvania Academy of Fine Arts in the 1960s. According to Lynch, he befriended morgue employees while hanging out at Pop’s Diner, and claims they once showed him the “parts room” where they kept limbs and other pieces of anatomy that were not matched to a body. He also recalled seeing body bags stacked up on the sidewalk. Morgue-related references can be found in many of Lynch’s films. 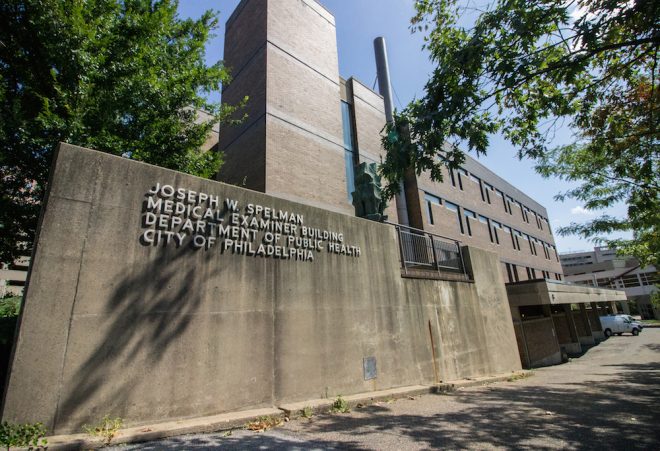 The Medical Examiner’s Office tucked away at 321 S. University Avenue is an exemplar of modern morgue architecture. | Photo: Michael Bixler

In 1951, changes in the City Charter eliminated the election-based Office of the Coroner and replaced the department with the appointed position of Medical Examiner. The City Morgue became known as the City Morgue and Medical Examiner’s Office. The first to hold this position was Dr. Joseph Spelman. There were grumblings in 1953 that the morgue at 13th and Wood was inadequate and situated in an area too congested to be convenient. Discussions about moving the morgue lasted over a decade, however the City instead decided to renovate, upgrade, and modernize the facility in 1964. Nonetheless, it still couldn’t keep up with modern times and was replaced by the current Medical Examiner’s Office, at 321 University Avenue in 1971, named after Dr. Spelman upon his death the same year.

After moving to University Avenue, the 1929 morgue was used by the City for various purposes for the next 40 years until it was sold to Roman Catholic High School for an annex in 2005 and the building was renamed McSherry Hall.

The 1971 Brutalist-style Medical Examiner’s Office in West Philadelphia is pretty grim-looking, and no matter how much landscape screening is added the place still sticks out like a severed thumb. In the next two years, if a City proposal comes to fruition, the Medical Examiner’s Office and the Morgue, along with the Philadelphia Police Department, the Department of Public Health Laboratory Services, and the Department of Public Property, will relocate to the new Public Services Campus inside the gold-domed Georgian Revival Provident Mutual Life Insurance Building at 4601 Market Street.