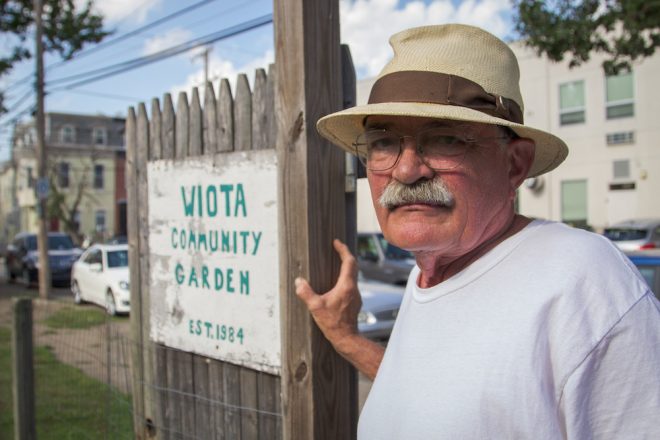 John Lindsay reactivated the vacant lot at Powelton and Wiota Streets with a community vegetable garden in 1984. Today it is a fixture of the community. | Photo: Tyler Horst

Caretakers of the Wiota Street Garden in West Philadelphia are preparing for the worst after receiving news that the sale of the publicly owned lot at Powelton Avenue and Wiota Street, in gentrifying West Powelton, may be in the works. An ongoing dispute between residents and City Council over preserving the 32-year-old community garden reached an impasse in 2014, resulting in the temporary postponement of the sale of the property. After constituent pressure, 3rd District Councilwoman Jannie Blackwell helped forge the postponement. Since then, garden leaders have increased programming, improved farm market sales, and added volunteers. However, John Lindsay, the primary caretaker of the garden, believes that the end is coming.

Lindsay, who transformed the vacant lot at 4022 Powelton Street into a garden in 1984, was recently informed by a source at the Philadelphia City Planning Commission that a deal to sell the land to a developer may have already been made. In response, he and the garden’s other caretakers are planning a picnic and rally to raise support for Wiota Street Garden on September 18, at 4PM.

“I love this garden,” says Veda Jackson, who lives nearby. “I’ve lived here for eight years and I come here every Sunday. The food is fresh and the people are nice. It’s very coordinated.”

The Philadelphia Redevelopment Authority currently owns the lot at 4022 Powelton Street. The City has allowed Lindsay and the community to use it for growing produce without any interference. In 2013, the public garden won first place in the Pennsylvania Horticultural Society’s City Gardens Contest. Yet, in light of the surge in real estate development, the land is ripe for residential construction, award-winning garden or not. 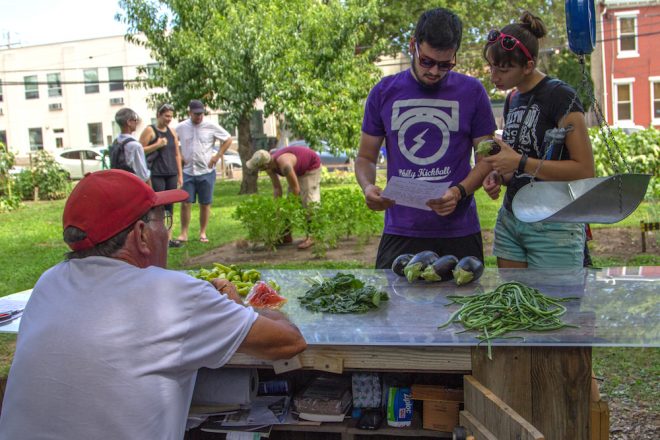 When the garden was threatened in 2014 Lindsay enlisted the Neighborhood Gardens Trust to help him obtain the title to the land, only to find out his organization was competing with a developer eyeing the lot for new apartments. In response, Lindsay erected a sign at the front of the garden stating, “Jannie Blackwell wants 12 houses built here.”

“One of the questions that was posed [at the final meeting] was, ‘What do we need to do so that we don’t have to keep having these meetings?’,” says Donald Fischer, one of the garden’s caretakers. “[Blackwell] wouldn’t give an answer. She just dodged the question.”

Lindsay agreed to make the garden even more accessible to the surrounding community as part of the deal with Councilwoman Blackwell to keep the lot from being sold. A guest list of people who use the garden—whether they volunteer for a workday to maintain it, buy from the farm stand on Sundays, or just come to sit in the shade—numbered 247 signatures from April to August of this year.

The farm stand, held every Sunday, sells fresh produce harvested from the garden at affordable prices. A pound of tomatoes, for instance, costs just $2.00. Nearby grocery, Aldi, a chain store at 46th and Market Streets, has agreed to match the discount prices offered at the farm stand. But the store’s produce is hardly fresh; the quality doesn’t compare to Wiota Street Garden’s. 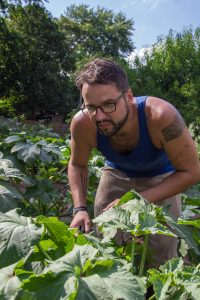 School teacher Donald Fischer, one of the garden’s caretakers, tends to the crops on a weekend afternoon. | Photo: Tyler Horst

“Most of the neighbors buy their fresh food here. Nothing tastes as good as food grown next to your house,” says Neil Benson, captain of the 100 block of Wiota Street. Benson also volunteers time to maintain the garden.

Lindsay uses proceeds from the farm stand to pay for cleaning services at the Powelton Playground and donates produce to the Red Cross House across the street from the garden.

Fischer, who teaches at Discovery Charter School, brings his 8th graders there for community service hours. When Lindsay agreed to make the fenceless garden even more open to the community he and the other caretakers put out a list asking residents if they wanted to use part of the space as a dog park. It had 56 signatures on the first morning.

The Redevelopment Authority declined to comment on whether there are currently any bids on the lot, citing confidentiality. Officials did state that the lot has not been sold yet.

Multiple attempts to reach Councilwoman Blackwell for a comment on the potential sale were not returned.

Garden supporters hope a big turnout on September 18 will send Blackwell and Redevelopment Authority officials a message. Lindsay encourages residents to come with dishes baked with ingredients from the garden. There will be live music and a series of speakers, including Greensgrow West director Ryan Kuck and author Steven Ujifusa.

However, the garden’s caretakers are realistic and acknowledge that they lack substantial leverage to stop the sale of the lot. “If we fill this place up, make it huge, get a lot of press, and we get blown away, then we’ve shot all our bullets,” says Lindsay. “We’ve lost the war.” The rally is Lindsay’s last-ditch effort to spotlight the issue and make a final statement, but he concedes that the ultimate fate of the garden is out of his hands.