A Million Faces Celebrates The Photography Of John Mosley 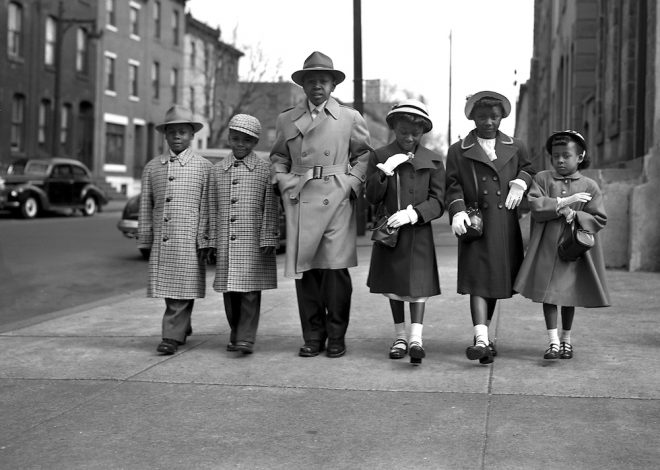 The photographs of Philadelphia photojournalist John W. Mosley offer an historical perspective that we have largely been denied. From the 1930s through the late 1960s Mosley lifted the fog of a city shrouded in segregation and institutional racism with his camera to show a community radiating strength, beauty, vitality, and pride. His photos for the Philadelphia Tribune and the Philadelphia Evening Bulletin captured uplifting moments and empowering representations of urban Black culture rarely shown by the white-dominated media of the time. His artful images of dignified business owners, effervescent street life, immortal public figures, and the arresting elegance of Marian Anderson’s smile edify the eye. At the Woodmere Museum the humanity of Mosley’s work comes alive in A Million Faces: The Photography of John W. Mosley, a powerful retrospective of 100 photographs taken from the Charles L. Blockson Afro-American Collection at Temple University.

Mosley, the son of a Baptist preacher, moved to Philadelphia in 1934 from Lumberton, North Carolina during the Great Migration. He learned the fundamentals of photography while working for Barksdale Photography Studio at 8th and Market Streets. Known among the African American community as a “picture-taking man”, Mosley worked seven days a week as a photojournalist for Black newspapers along the East Coast, and his photos were often featured in Jet magazine. He was the longtime staff photographer for the Pyramid Club, a distinguished social organization for Black professionals at 1517 W. Girard Avenue, founded in 1937 to advance the civic and cultural standing of African Americans. 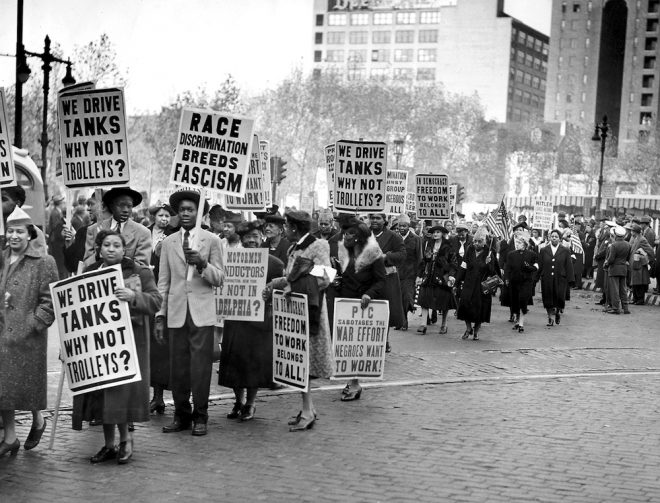 Mosley took more than 300,000 photographs during the turbulent decades spanning the Great Depression and the Civil Rights Movement. He used a large format Graflex Speed Graphic camera and a medium format Rollieflex, working explicitly in black and white film. He kept a darkroom and studio in the basement of the Christian Street YMCA, recording the gradual unfurling of integration in the neighborhood through the children and members of the historically Black community center.

Mosley’s documentation of pivotal, civil rights news is exemplified in his photographs of the 1944 Philadelphia Transportation Company strike. In 1943 marches were organized to protest the PTC’s lack of black motormen. In one photograph a crowd of well-dressed demonstrators carry signs declaring, “Race Discrimination Breeds Fascism” and “We Drive Tanks. Why Not Trolleys?” After the transportation company announced plans to promote eight Black employees to driver positions, thousands of white transit workers went on a wildcat strike, abandoning more than a million daily public transportation riders and bringing strained racial tensions in the city to a steady boil.

But the verve of Mosley’s lens was in his photos of musicians, athletes, beauty queens, beachgoers, and his positive depictions of everyday life. In his series from the segregated sands of Atlantic City, Mosley captures warm smiles and sunny leisure at “Chicken Bone Beach”, a stretch of shoreline spanning Missouri to Ohio Avenues frequented by Black families, celebrities, and political figures. In the series, lovely women flash enchanting grins, Sammy Davis Jr. holds seaside court with a group of imbibing fans, and Dr. Martin Luther King Jr. casually poses for a photograph in a polka dot bathing suit and cap. 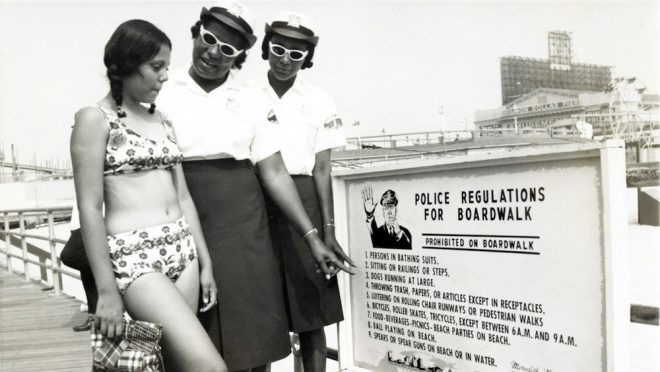 Back in Philadelphia, portraits like that of a young, all-American majorette from 1945 presents common, uplifting moments in Black culture that, with the exception of the poignant photos of Gordon Parks, rarely graced the pages of LIFE magazine.

Glowing captures of Muhammad Ali, Marian Anderson, Jackie Robinson, Duke Ellington, Ella Fitzgerald, and Lena Horne abound in the retrospective. Mosley’s mastery of thoughtful composition takes center stage in images of Philly-born soul jazz pianist Trudy Pitts, Billie Holiday and Billy Eckstine at the Earle Theatre on Market Street, and Charles Blockson, renowned African American studies scholar at Temple University and curator of the exhibition, in mid-throw during a shot put competition at the 1955 Penn Relays when he has on the track and field team at Penn State.

The design and arrangement of the exhibition itself is a work of art. Large and medium format prints of varying dimensions fill the curvaceous rotunda of the Kuch Gallery, elevating viewers to the balcony level above with context, geometry, and contrast. Blockson’s incisive curatorial vision, coupled with insightful, interpretive gallery notes, delivers an important, impactful exhibition that both honors Mosley’s riveting body of work and illuminates underrepresented moments in Philadelphia history.

A Million Faces: The Photography of John W. Mosley is on view at the Woodmere Museum at 9201 Germantown Avenue until January 16, 2017. For more information about the exhibition and a list of lectures and events see their website HERE.