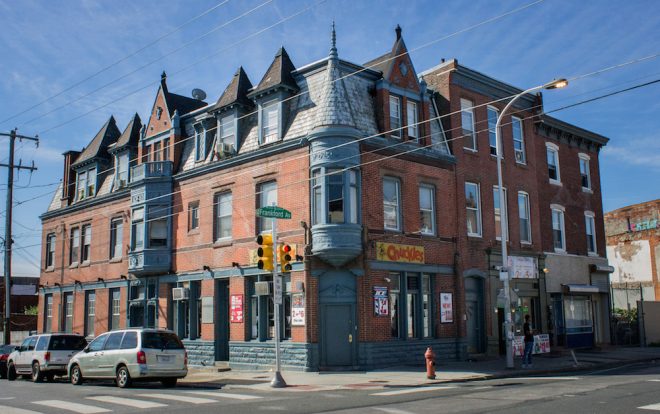 Chuckles Bar and Grill mans the corner at Frankford Avenue and Clearfield Street. This is one of the handsomest spots in the tattered heart of Kensington, between Lehigh and Allegheny Avenues, and it has been a meeting place for more than 120 years.

The building is actually two–the meeting hall and an original house at 3055 Frankford Avenue built for tax collector Samuel Rowan in the 1880s. Around the same time, business proprietor Charles Hammel set up a liquor store in a small wood building at the southeast corner of Frankford and Clearfield Streets. Hammel was also the neighborhood’s Common Councilman (City Council then was a bicameral body made up of the Common Council and Select Council). When Hammel set up shop the area must have felt somewhat primitive; streets were dirt and electric power hadn’t arrived; some still called the place Stansborough.

All of that began to change between 1889 and 1892 when City workers installed electric wires and electric street lamps and graded the streets and paved them with Belgian blocks. With business good enough, Hammel moved his liquor store into the old Rowan residence and, in 1892, began construction on an addition to make room for a new liquor store, an apartment, and a community center where local organizations could meet. The new building became known as Hammel’s Hall. In 1893, businessmen met there to organize a merchants alliance and launch the Twenty-fifth Ward Improvement Association.

John Donohue bought the property sometime before 1908 and renamed it Donohue’s Hall. Donohue made it the go-to spot for every club and union in the neighborhood. The Patriotic Order Sons of America, Nantihalah Tribe No. 344 of the Improved Order of Red Men, the American Flint Glass Worker’s Union Local 64, the International Association of Bridge and Structural and Ornamental Ironworkers Local 405 (now Iron Workers Local 405), and the Frankford Section of the United Gas Improvement Company (precursor to PGW) made use of the building for meeting space. John Donohue himself was president of a fraternal organization that met in his hall, the Ancient Order of Hibernians in America, Division 28. 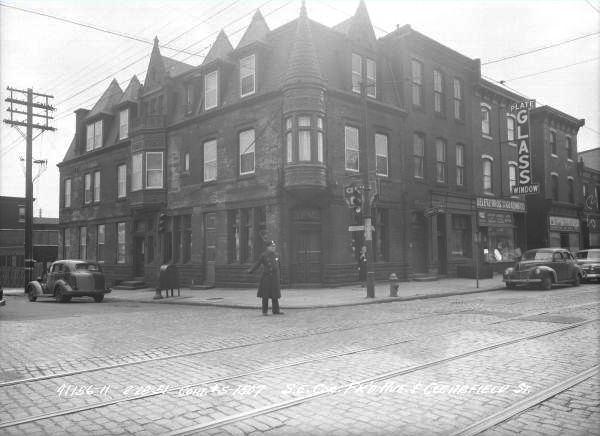 Neighborhood businesses rented the upstairs offices. One of them was a building and loan association, the Clearfield Building Association of Philadelphia, which operated at Donohue’s Hall for 20 years and endured until 1973, when it folded as the Clearfield Federal Savings & Loan Association.

Builder Jacob Korman had an office there in 1910. Sharing the same last name, but no family relation, Jacob became a competitor of Hyman Korman, progenitor of real estate empire Korman Communities, when both men began developing Northeast Philadelphia.

By the 1940s the old hall had a bar on the ground floor and shabby rooms for let upstairs. The Three Stooges and Marx Brothers are said to have stayed there in Frankford Avenue’s heyday. By 1950, Clement and Jean Niwinski bought the building from Joseph Janachowski, converting the upstairs rooms into seven apartments and the storefront into Clem’s Bar, also known as Clem’s Cafe and Clem’s Olde Inn.

Bill & Sue Wharton (1977-81), Abraham Modell (1981-86), and Joan E Rock (1986-1990) owned the building and the bar. In 1990, current owner Charles Raday, Jr. took over and opened Chuckles Bar and Grill, while using the 3055 Frankford section of the building as a bodega and beer store, returning the building to its origins as a liquor store. Raday, Jr. upgraded the apartments. Chuckles is a neighborhood institution and even hosts a popular karaoke night.