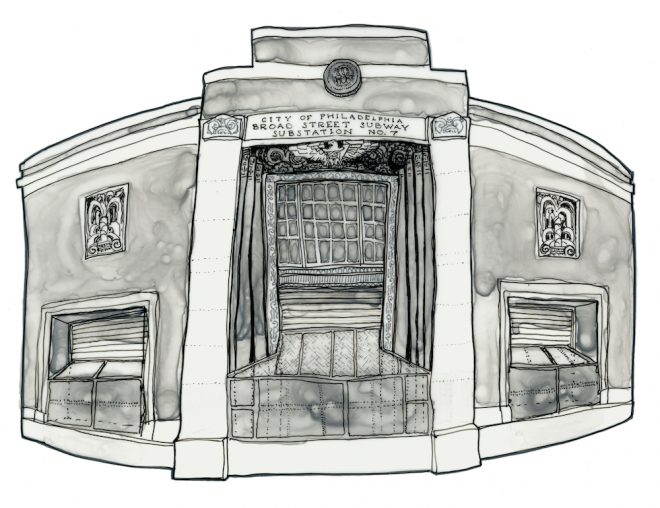 Construction on the Broad Street Subway began in 1924, and four years later the first trains began running between Olney and City Hall. Southward expansion occurred in fits and starts, reaching South Street in 1930, Snyder Avenue in 1938, and Pattison Avenue in 1973. This helps explain why Substation #7, designed by an unknown staff architect in the Department of City Transit in 1929 for the subway’s first expansion, is such an anomaly: a lavish Art Deco jewel box adorned with spiraling ferns, frozen fountains, and a gilded eagle. Substations house electrical equipment that converts high-voltage electricity from large power plants into lower voltages suitable for neighborhood distribution; PECO, the City of Philadelphia, and various trolley companies all designed and built their own substation networks, each with their own recognizable styles. Substation #7 is by far the most ornate of the many substations scattered across Philadelphia, built during a brief window when the popularity of Art Deco coincided with municipal coffers flush enough to afford it.