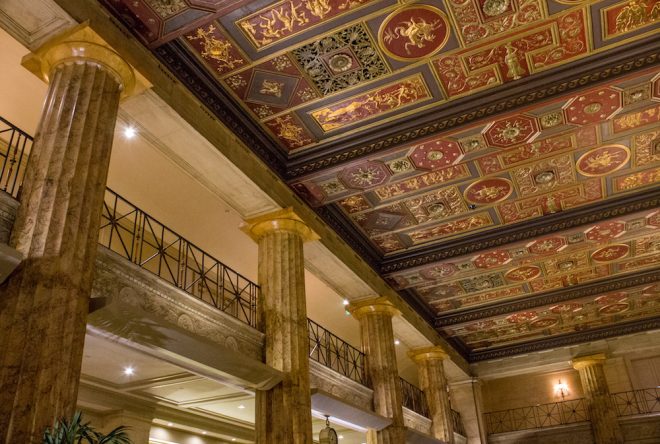 The historic restoration of original Trumbauer ceiling in the lobby brings gilded authenticity back to the former hotel’s interior. | Photo: Michael Bixler

Stepping into the lobby of AKA Washington Square from the clamor of 9th and Chestnut is disarming and a little disorienting. The ground floor of the former Benjamin Franklin Hotel, designed by the distinguished, yet often overlooked architect Horace Trumbauer, has a moody, meditative quality that fills the space with the hush of an art gallery or church sanctuary. The rich ornamentation of the original ceiling paintings three stories above envelop the room with a glowing tableaux of deep crimson and gold leafing. The marble-terraced foyer has more in common with a cloister–I’m reminded of the Abbey of Saint-Genis-des-Fontaines at the Philadelphia Museum of Art–than the mezzanine of a Center City apartment building.

Larry and Brad Korman, brothers and co-CEOs of the real estate firm Korman Associates, purchased the 91-year-old E-shaped landmark in 2011 and have been working with Nicholas Cardone, vice president of design at Korman Communities, to restore what was once the largest hotel in the city with faithful restorations to the lobby and contemporary upgrades for the 412 active residential units. The renovation has so far cost Korman Associates $15 million for the 500,000 square foot, 18-story hotel, a project the firm estimates will end up costing over $20 million. The Kormans’ two other properties in their AKA “luxury long-stay” portfolio include the recently completed AKA Rittenhouse Square, the 1913 Beaux Arts apartment building at 18th and Walnut Street that saw the restoration of 81 units and construction of 1,600-square-foot penthouse suites on the top three floors, and AKA University City, 268 ultra-lux furnished hotel and apartment residences under construction on the top 18 floors of the FMC Tower at 30th and Walnut Streets. 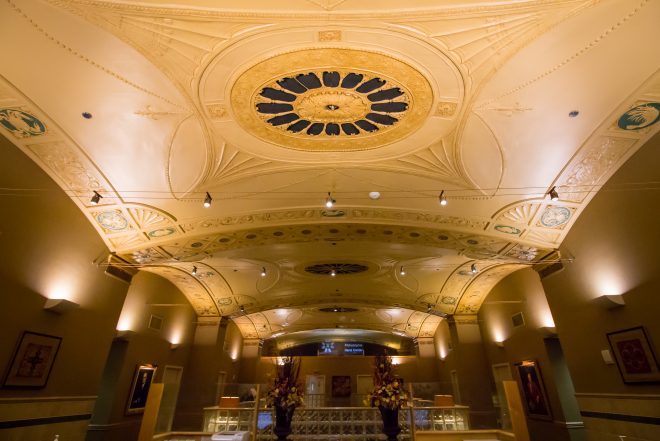 The vaulted ceiling of the old Kite and Key Dining Room and Lounge is peppered with medallions depicting sea creatures and wild game. The offices of The Philadelphia Hand Center currently occupies the space. | Photo: Michael Bixler

In the fall, dining will return to the old Benjamin Franklin Hotel, which once boasted three separate restaurants, with the opening of Rarist, an upscale American eatery and cocktail lounge. Afternoon tea will also be served on the Lincoln Balcony, affording non-residents to experience the Gilded Age splendor of Center City’s past that doesn’t require standing in line at the Wells Fargo inside the Fidelity Trust Company building or eating in the food court at the Bourse.

When the Kormans bought the Ben Franklin House five years ago the interior had deteriorated. “Gold leafing kept falling down from the lobby ceiling. The original colors of the reliefs were painted over in the blue and yellow of the Philadelphia flag,” says Bill Long, operations manager of the building. Long has spent decades managing some of Philadelphia’s finest early 20th century hotels—the Drake, Belgravia, and 1900 Rittenhouse Square Apartments to name a few. While the state of the building wasn’t nearly the worst he had seen, it wasn’t in the best shape either. As an extra strain, rooms on the ground floor were partitioned off for medical offices and other commercial spaces, which gave some visitors access to the lobby but also increased foot traffic and created logistical chaos for maintenance and security.

The Benjamin Franklin Hotel was built on the site of the Continental Hotel that was constructed between 1857 and 1860. John McArthur, Jr., the architect of City Hall, designed the Continental in the Italianate style with a Renaissance palazzo motif built of brownstone and topped with a quiet, cast iron cornice. When it opened the hotel featured an elevator and enough room to accommodate 1,000 guests. 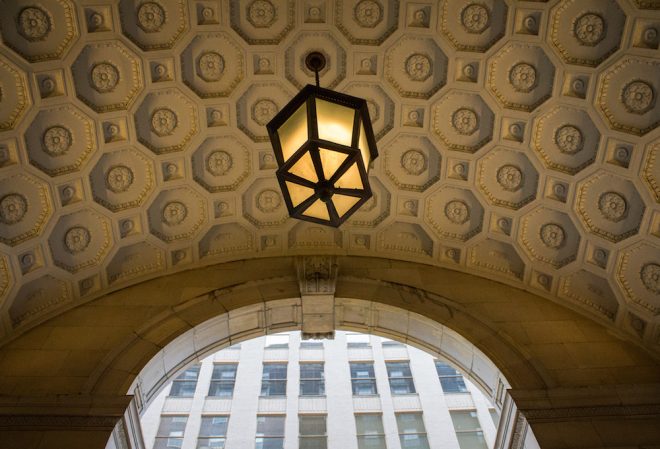 Hanging inside the Lincoln Balcony is the original lamp from the Continental Hotel under which President Abraham Lincoln addressed a crowd on his way to Washington to give his inaugural speech in 1861. | Photo: Michael Bixler

On February 21, 1861, President-elect Abraham Lincoln arrived in Philadelphia on his way to Washington to give his inaugural speech. Lincoln addressed a crowd with mayor Alexander Henry from a balcony of the Continental while lodging at the hotel. It is rumored that Trumbauer placed his “Lincoln Balcony” in the exact place where Lincoln gave his speech. Above the balcony, Trumbauer installed the original lamp that illuminated Lincoln; it still hangs there today.

Niagara Falls native Frank A. Dudley, founder of the United Hotels of America chain of upscale hotels, opened the Benjamin Franklin Hotel on the site of the Continental in 1925. It was the last grand hotel to open in Philadelphia before the Great Depression.

Despite the public campaigning and legal advocacy of lawyers Sadie and Raymond Pace Alexander, the hotel, even in 1947, had been able to maintain a “whites only” policy. That year, management refused to accommodate Jackie Robinson, the rookie phenom of the Brooklyn Dodgers who came to play a series against the Phillies. The Dodgers took rooms down the street at Bellevue-Stratford and later made the Warwick Hotel at 17th and Locust their home in Philadelphia.

In 1982, preservationists placed the Benjamin Franklin Hotel on the National Register of Historic Places. 412 guest rooms were remodeled for apartments in 1990 and the building was renamed Benjamin Franklin House. The infamous “Ballroom at the Ben,” renovated in 1988, was forever enshrined in the collective minds of Philadelphians by the dance competition scene in the 2012 romantic comedy, The Silver Linings Playbook. 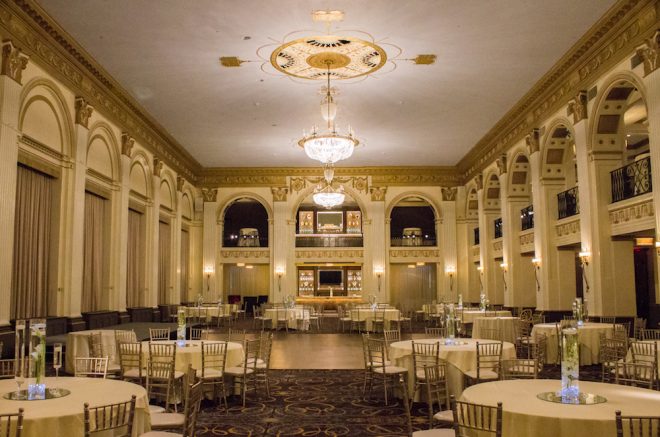 A 20th century ballroom built for pomp and circumstance. In 2012, its thunder was forever stolen by Bradley Cooper and Jennifer Lawrence. | Photo: Michael Bixler

Since 2011, when the Kormans bought the building most of the first level has been reabsorbed into the original layout, with the exception of the Philadelphia Hand Center whose offices still occupy the old Kite and Key Dining Room and Lounge. Gracing the curvaceous vaulted ceiling above the medical office is a menagerie of crabs, octopi, and rabbits—original reliefs of items from the animal kingdom that were available on the restaurant’s 1920s menu. Other dishes included Philadelphia Pepper Pot Soup, marinated herring with sour cream, the “Ben Franklin Relish Wagon,” and martinis for 70 cents. In the 1950s the former dining room was used for a small ice skating rink.

The most significant historic restoration has been in the lobby. Keystone Preservation Group conducted an analysis to determine the original Trumbauer color scheme of the ceiling, which was then painted by hand. The residential and terrace-level hallways, fitness center, resident business center, and 100 apartments have been completely renovated so far. The Chestnut Street and 9th Street entrances were also replaced with period-appropriate doors, designed by Nicholas Cardone, that retain the historical character of the building at street level. Along with continued upgrades to residential suites, preparations are underway to clean the façade and ready the Lincoln Balcony for afternoon tea service. Finley Catering and chef Anthony Marini, a winner on the CNBC show Restaurant Startup, plan to have the new restaurant open by early October.