Ring The Alarm! Now Is The Time To Protect Philly’s Historic Firehouses 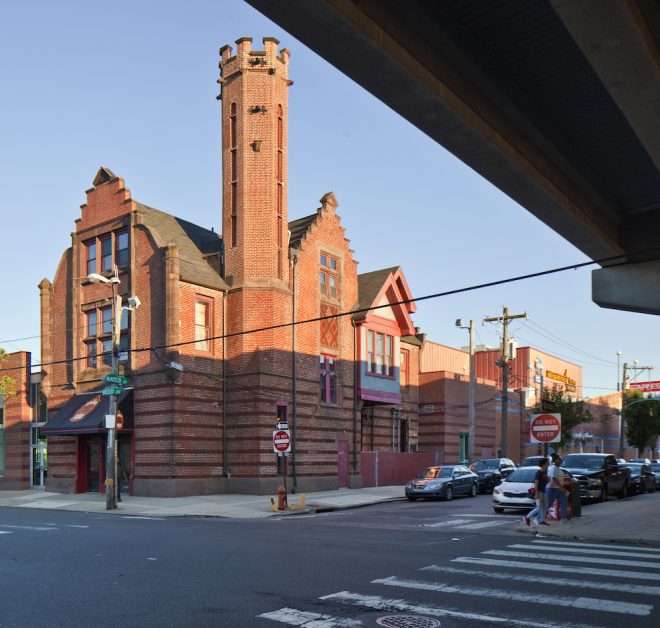 The red brick, turreted tower of the Engine 46 Firehouse peers over I-95 like a vintage periscope rising above a concrete intruder. As it has for more than a century, the castle-like, Flemish Revival façade attributed to architect John Torrey Windrim stands out in the South Philadelphia neighborhood of Pennsport as one of its most iconic buildings. Yet there was nothing to prevent Cedar Realty Trust from obtaining a permit in 2013, and renewing it in 2015, to tear down this empty structure at Reed and Water Streets. Like many of Philadelphia’s historic firehouses, Engine 46 was not listed on the Philadelphia Register of Historic Places, which legally protects buildings from demolition unless financial hardship can be proven by the owner.

A two-fronted wave of grass roots and professional preservation advocacy (including designation by the Preservation Alliance for Greater Philadelphia as an “endangered property” and a petition at Change.org) might well have made the difference. Today, Engine 46 still stands, having won the battle for now. Yet, the demolition permit remains in effect, and the building cannot be nominated for the Philadelphia Register until it expires. Meanwhile, dozens of other historic firehouses remain vulnerable due to neglect or development pressure.

There are other survivors from what can be termed the golden age of firehouse design, time when, as architectural historian John Maass once put it, “political bosses used to glory in building the showiest firehouses.” In addition to Engine 46, several more firehouses designed by, or attributed to, Windrim still stand. Particularly vulnerable is a vacant and dilapidated gem by Windrim on Belmont Avenue near Wyalusing in the Parkside neighborhood. One piece of good news: The University City Historical Society, Andrew Cushing, and Oscar Beisert nominated the building to the Philadelphia Register, and it was approved in July.

More subdued, yet still handsome is the firehouse at 1016 South Street, built in 1902 and designed by Philip H. Johnson. The Pennsylvania Historical & Museum Commission found the building’s history as the home of a segregated African-American fire brigade from 1919 to 1952 worthy of a blue historical marker, yet it is not listed on the Philadelphia Register. Although the building is occupied and looks to be in good shape, that isn’t always enough lately. The examples of the nearby Society Hill Playhouse (see “Places to Save” in Extant Vol. I, No. 3) and the former Please Touch Museum show that deep-pocketed developers are willing to tear down good buildings in Center City. 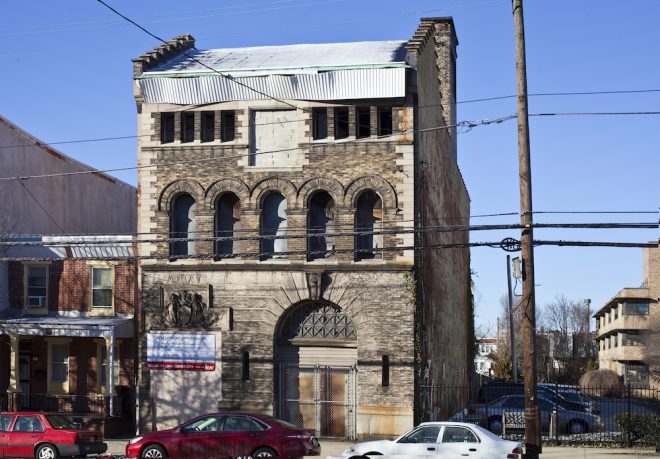 Indeed, if history is to be our guide, long-term survival is uncommon, with the majority of Philadelphia’s firehouses built before 1950 having been torn down. Look at the losses of Windrim’s other work, all from the 1890s: the Central Fire Station, on the 2100 block of Market Street and two in North Philadelphia (26th and York and Berks and Warnock). The Roman Palazzo at 20th and Point Breeze Avenue was long ago replaced by a boxy, utilitarian model. The firehouses designed by other architects have fared no better. Only a handful of the volunteer fireman’s halls built before the City professionalized firefighting in 1871 have survived the vagaries of the real estate market. Yet, City-owned fire stations were also frequently torn down to accommodate changes in equipment, and were often rebuilt in the same location. The most recent loss was the former Philadelphia Fire Department headquarters on the 1300 block of Race Street. Although in active use at the time, but no longer as PFD’s headquarters, the building was demolished in 2007 for the Pennsylvania Convention Center expansion, and its wonderful gargoyles were put into storage.

The City operates ten firehouses that have been in service for the better part of a century or more. There’s Charles Oelschlager’s Engine 50 at Cambria Street and Park Avenue in North Philadelphia. Engine 12 is on Main Street in Manayunk and Engine 14 at Foulkrod and Darrah Streets in Frankford. Both were designed by architect John Molitor and both are still operational&mdash&for now. They and others remain unprotected.

As with other clusters of building types, including, most prominently, schools, sacred structures, and industrial buildings, there remains no comprehensive approach—no planning, not even a clear, big-picture argument to preserve and protect. No wonder the losses have piled up. Its remarkable Engine 46 and the like have made it this far.

What we do have is an ad hoc, building-by-building approach that sometimes works. But that’s a micro-level approach to a situation that cries out for a macro solution. Case in point: late last year, the Philadelphia Historical Commission approved a nomination submitted the previous spring for Engine 37 in Chestnut Hill, a Windrim structure in the Richardsonian Romanesque‐style in continuous use since the 1890s. The compelling and thoroughly-researched nomination, presented by the Chestnut Hill Historical Society, described the building’s “sense of strength, permanence and undeniable presence” and contextualized it as one of the best Philadelphia firehouses, then or now. A proud structure worthy of respect and accommodation with smaller, specially-purchased firefighting equipment. But one designation isn’t a solution for a situation that demands a comprehensive approach.

A Rich and Colorful Heritage 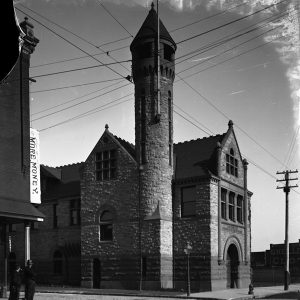 This Windrim-designed firehouse at 26th and York was torn down in the early 1950s | Photo courtesy Phillyhistory.org.

When and why did the Philadelphia firehouse come to be so important, so worthy of our stewardship?

The City of Brotherly Love’s wide and orderly street grid, an enlightened design response to London’s Great Fire of 1666, helped prevent Philadelphia from enduring the conflagrations that afflicted so many other cities. Smart planning was baked in and fire prevention was part of the city’s DNA. But Philadelphia also needed firefighters and firehouses.

Between the 1730s, when Benjamin Franklin co-founded the city’s first volunteer fire department, and 1871, when the City created a permanent and professional Philadelphia Fire Department, the city developed a distinctive, expansive firefighting culture all its own, a culture that ran deep, proud, and sometimes venerable. (A few sparse examples remain from the pre-professional era in Philadelphia firefighting. There’s the Schuylkill Hose and Hook and Ladder Company at 1227 Locust Street and the Harmony Hose House, at Broad & Fitzwater Streets, one of the last fire stations built by a volunteer company.)

By the mid-19th century, the city had some 70 volunteer fire companies, organizations that doubled as social and political clubs. They provided citizens, old and new, with fellowship, acceptance, and a way to demonstrate patriotism. Philadelphians named their fire companies to project national loyalty (Franklin, Washington, United States, and Columbia) and to assure good character (Diligent, Vigilance, and Good Will). They were populated by men who, as adolescents, had risen through the ranks of street gangs that “ran” with local fire companies. These gangs bore names like the Schuylkill Rangers and the Kensington Blackhawks but also, more notoriously, Bleeders, Bouncers, Gumballs, Rats, Smashers, and Killers. Rivalries grew into fights and violence among the volunteer fire companies, wrote Bruce Laurie in The Peoples of Philadelphia. “Not brief scuffles, but riots replete with arson, shooting, and murder.”

“A man who wanted to be a political leader could demonstrate his courage and leadership capacity” as a volunteer fireman,” wrote Peter McCaffery in When Bosses Ruled Philadelphia. And a volunteer fire company wishing to demonstrate stature could do so by commissioning a distinctive firehouse design. This characteristic from the world of volunteer firefighting made its way into the culture of the city’s professional fire department. By the 1880s and 1890s, many of the city’s political leaders had come to power through that system. When they had the opportunity and the influence, they would insist on proud, expressive, exuberant firehouse design. They would hire Windrim.

An Architecture to Reflect a Social and Political Culture 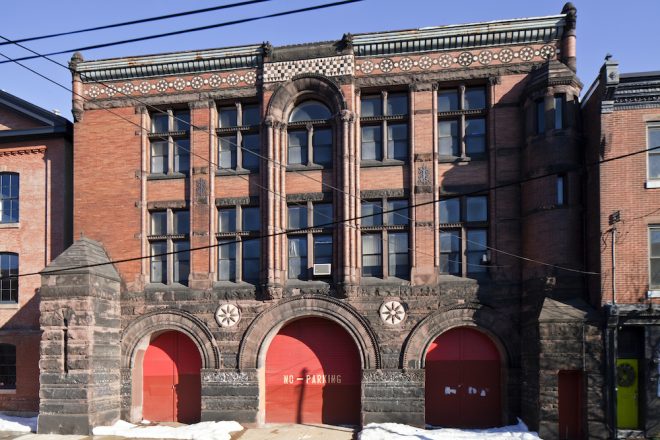 By the 1890s, Philadelphia and many other large American cities were commissioning firehouse designs far more eclectic and expressive than almost any other genre of civic architecture. According to Rebecca Zurier, author of The American Firehouse: An Architectural and Social History, “perhaps no other type of building illustrates the imaginative possibilities of eclecticism so well.” Without one “prevailing opinion on the ‘proper’ style for a fire station,” architects deployed any and all known styles.

The finest remaining example of that eclecticism brings us back once again to Windrim. His picturesque Engine House 29 on 4th Street just north of Girard Avenue might called Richardsonian Romanesque, yet there are also hints of Frank Furness and decorative elements borrowed from Pennsylvania Dutch iconography. Fortunately, the building, still owned by the City but up for sale off and on in recent years, was added to the Philadelphia Register in 1989. 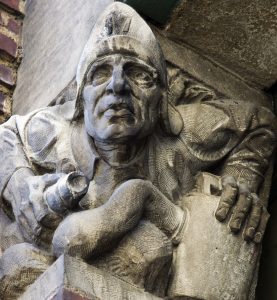 The rise of Philadelphia’s Fire Department in the last decades of the 19th century coincided with, and to some degree shaped, this golden age of American firehouse design. “Opulent fire stations constituted political as well as architectural statements,” writes Zurier. “Responsibility for commissioning a particularly extravagant fire station” could often be “traced directly to the wishes of the mayor.” Indeed, as Philadelphia’s neighborhoods expanded with miles of new construction every year from the 1880s through the First World War, political and civic leadership initiated expansion of its firefighting infrastructure, commissioning firehouses from an array of architectural talent. In addition to architects Windrim, Johnson, and Oelschlager mentioned above, the city had firehouses designed by Joseph M. Huston, Hazelhurst & Huckel, W. Bleddyn Powell, and Edgar V. Seeler.

Much has been lost. Of what survives, a few are in the hands of respectful owners: a Philip H. Johnson firehouse at 50th and Baltimore Avenue now serves as Dock Street Brewery. The restaurant Jack’s Firehouse has occupied the former Fairmount Firehouse since 1989. Materials Conservation Co. founder John Carr stewards John Molitor’s Engine House 15 at Cecil B. Moore Avenue and Howard Street in Kensington. But many more active and retired firehouses remain, stretching from Richardson Romanesque to Mid-century Modern. They stand as proud survivors and ragged orphans, uncatalogued and largely unprotected.

As individual buildings, nothing is systematic about their preservation. And even less is certain about the big picture of Philadelphia’s long and proud, skin-of-the-teeth, firefighting legacy.

Ken Finkel Kenneth Finkel, a Temple University Professor, specializes in Philadelphia Studies and Public History. He's been Curator of Prints and Photographs at the Library Company of Philadelphia, Program Officer at the William Penn Foundation and Executive Director of Arts & Culture Service at WHYY. Finkel first honed his voice as a regular contributor to The Philadelphia Inquirer’s op-ed page in the 1980s and now writes at The PhillyHistory Blog. His books include Nineteenth-Century Photography in Philadelphia (1980), The Philadelphia Almanac and Citizens’ Manual (1993 and 1994).