Razing A City In Haste: The Lesson Of The Horn Building 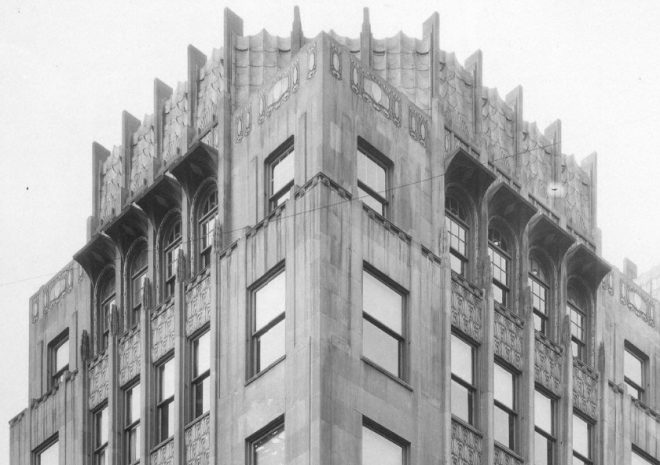 Crown details and the Art Deco decorum of the Horn Building. It was demolished in 1966 to make way for the Regency Theater | Source: City of Philadelphia, Records Department

The relentless nature of the present building boom is dividing urbanists. Many bemoan preservationists’ passionate stand against the destruction of historic buildings, interpreting the stance as resistance to progress. Preservationists, on the other hand, believe the city can’t be great by sacrificing its historic character. The lines of opposition don’t necessarily need to be so stark, but in a case like Toll Brothers proposed 16 story tower on Jewelers Row, which will require the demolition of five historic properties, advocates of both sides believe the future of Philadelphia is at stake.

It may be helpful to recall that this conflict isn’t new. Philadelphia has been facing the loss of quintessential landmarks not because they were irreparably damaged, vacant, underutilized, impossible to reuse, or were functionally obsolete, but because they were just standing in the way for generations. The Horn Building, a breathtaking piece of Art Deco that was replaced by a dull movie theater, is one such example.

A Crowning Achievement On Chestnut Street 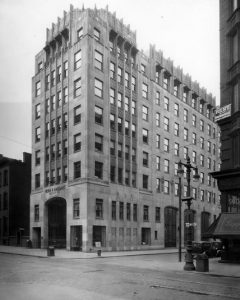 Horn and Hardart was a corporate chain of restaurants and automats–the pre-cursor to fast food industry as we know it today and an important element of 20th century American urban life. Philadelphian Joseph Horn and New Orleans-bred Frank Hardart introduced the automat in Philadelphia and in New York City in 1912. The company quickly expanded in the two cities and began to open retail stores selling pre-packaged food from a menu in 1924.

Horn & Hardart had a penchant for real estate development. Not only did they buy land to develop for their automat and restaurant locations, but the company would often build leasable offices on top. These buildings, like their restaurants, were designed to stand out as significant icons of local architecture. The Horn Building at 16th and Chestnut Streets, the company’s Philadelphia headquarters and home of its flagship restaurant location, stood out more than the rest.

In 1925, the Horn and Hardart Baking Company commissioned its go-to architect, the prolific Art Deco expert Ralph Bencker, to design a $600,000 eight-story restaurant location with offices. A contracting firm, Maustbaum Brothers & Fleischer, was hired to build it. Horn and Hardart chose the prominent northwest corner of 16th and Chestnut Streets, where an abandoned 1830s mansion, last used as a photography studio, sat on a large, unused property.

The new building, which opened on July 1, 1926, drew the pedestrian’s eye with a limestone façade that began at street level with huge archways filled with stained glass. Decorative grills were punched into the stone front between window openings. The third floor façade featured allegorical statues between the windows, while patterns in metal filled the spaces between floors. The 8th floor, slightly set back from the rest, featured awnings that seamlessly stuck out over almost every window. The building was then topped with a beautiful crown resembling the fins and scales of a giant fish and reminiscent of the royal headband of Poseidon. It was named the Horn Building after company president Joseph Horn. 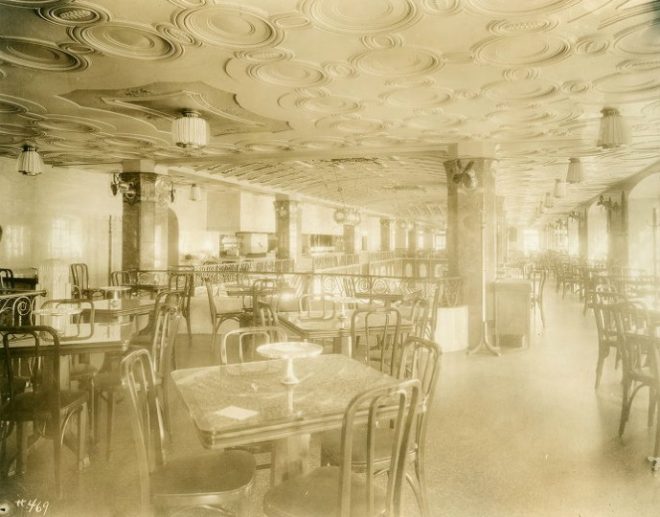 Decor and details abound inside the Horn & Hardart restaurant at the Horn Building | Source: D’Ascenzo Studio Archives, Athenaeum of Philadelphia

The interior details and stained glass, created by Horn & Hardart’s other favorite designers, D’Ascenzo Studios (who even handpicked the furniture), carried the themes inside. Upon entering the building from Chestnut Street, one would walk along a mosaic sidewalk through an arch that lead under a decorated dome surrounded by the mezzanine-level stained glass windows. The first floor and mezzanine was filled with the flagship Horn and Hardart restaurant. It was so thoroughly detailed that even the plaster on the ceiling and the metal railings were filled with resplendent patterns. The floors and columns were covered in marble.

After 1939, the firm opened a second office in Philadelphia, at 10th and Locust Streets, freeing up plenty of leasable space at the Horn Building. Architect Ralph Bencker moved his offices there from the Bellevue Court Building in 1926 and worked there until his death in 1961.

Beginning in the late 1930s and early 1940s, doctors’ offices took over part of the property while Medical World, a monthly trade magazine for the medical profession, was published there. The American Institute of Homeopathy used the building as its headquarters into the 1950s. 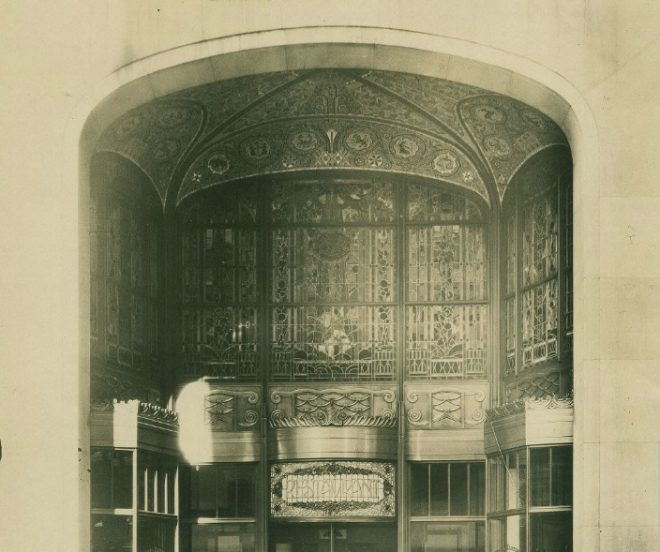 Chestnut Street entrance of the Horn Building was a feast for the eyes | Source: D’Ascenzo Studio Archives, Athenaeum of Philadelphia

In the 1940s, two advertising agencies, Seberhagen, Inc. and the Clements Company, were the Horn Building’s most prominent tenants.

Seberhagen Inc. promoted local firms like Gretz Beer, Jacob Reed Sons, American Messer Corporation, and, for a time, the Philadelphia Phillies. In fact, bad publicity the company received about its handling of the Phillies account drew attention to the firm. In 1943, the ad agency purchased a 10-minute spot for the Phillies on KYW radio that played every morning at 7AM to keep fans updated on the team’s progress. The promotional spot was one of the first radio programs dedicated to an individual baseball team. The strategy angered other stations, which then refused to mention the Phillies on the air, making Saberhagen’s strategy backfire.

The Clements Company was notable in its time for being headed by a woman, Alice V. Clements. She took the helm of the company when her husband Ike Clements, the company’s founder, was taken ill and later died in 1950. The ad agency represented a number of local companies including Goldenberg’s Peanut Chews, Ritter’s Catsup, and of course, Horn & Hardart. Alice Clements herself wrote, directed, and produced the Horn & Hardart Children’s Hour. 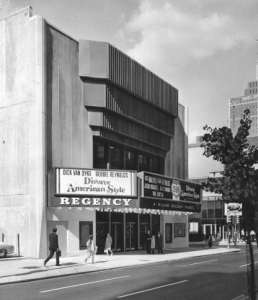 During its final decade in the 1950s the building’s largest tenant was L.G. Balfour Company of Attleboro, Massachusetts, the makers of college fraternity and sorority regalia, class rings, and sports memorabilia.

By the early 1960s, the old Horn Building was looking worn. The façade was dirty and the offices were outdated and mostly empty. Horn & Hardart moved its operations out of the building, relocating its restaurant into the squatty-looking (and unfortunately still standing) building on 16th Street now occupied by The Children’s Place. The Horn Building was unceremoniously demolished in 1966 to make way for the ugly and uninspired Thalheimer & Weitz-designed Regency Theatre that stood until 1987.

Today, part of Two Liberty Place and the entrance to the Shops at Liberty Place cast a shimmering shadow on the site of the old Horn Building. This final outcome isn’t exactly the worst fate for such a kinetic Center City street corner, but it is still worth lamenting what was arguably one of Philadelphia’s best building designs of the 20th century to have hastily suffered the wrecking ball.