On Jewelers Row, Tracing The Origins Of 702-710 Sansom Street 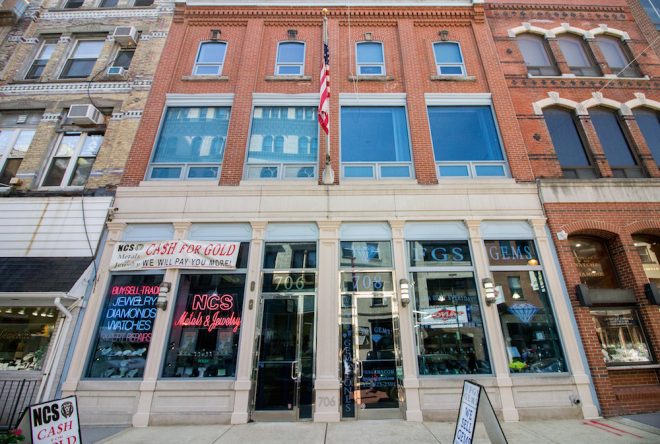 On August 11 news broke that Toll Brothers, the national suburban home builder, was planning to demolish five buildings on historic Jewelers Row and erect a 16-story condo tower. Despite being part of the oldest jewelry district in the nation, the buildings at 702-710 Sansom Street were not listed on the Philadelphia Register of Historic Places, which would protect them from being torn down.  The Preservation Alliance for Greater Philadelphia rushed to write nominations to the historic register for 704 and 706-708 Sansom, submitting them last week, however they face long odds since Toll Brothers had already applied for a demolition permit.

Whether or not they are successful, the nominations do reveal what’s at stake: layers of historical significance that go far beyond the affection locals have for this venerable Philadelphia institution, dating back to the days when the 700 block of Sansom Street was the center of the city’s publishing industry.  Yet the origins of this storied little strip of buildings begin even earlier, in the last decade of the 18th century.

Birth of the Philly Row 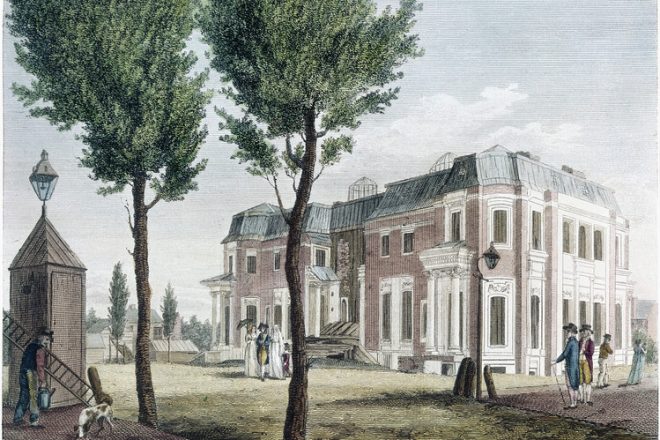 In the 1790s, Founding Father Robert Morris owned the property where 702-710 Sansom Street stands today. Morris, a signer of the Declaration of Independence who helped finance the American Revolution, invested in land speculation after the war, becoming the nation’s largest private landowner. Morris initiated plans to build a mansion on the land in 1794. He hired French-born architect and civil engineer Pierre Charles L’Enfant, best known for creating the street plan of Washington, D.C., to design the home. However, the Panic of 1796–1797 drove Morris to into bankruptcy before it could be completed. Unable to repay his creditors, Morris was arrested and imprisoned at the Walnut Street Jail, just two blocks away from his unfinished mansion, which became known as “Morris’s Folly.” The doomed property went to sheriff’s sale in 1799.

Developer William Sansom bought the unfinished Morris home and attached land between Walnut and Chestnut Streets. He demolished the home and began planning what would become the nation’s first speculative housing development, Carstairs Row. Sansom began by subdividing the large block between Walnut and Chestnut Streets and building a new road, predictably named Sansom Street. He spent his own money to pave the street at a time when many of Philadelphia’s thoroughfares were just dirt paths, envisioning that it would be an attractive amenity for would-be residents. He then commissioned architect Thomas Carstairs to design a tract of row houses on the south side of the block. 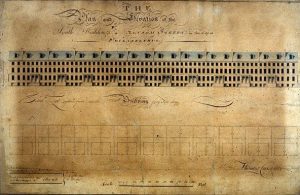 Drawing of Carstairs Row, one of the country’s first blocks of rowhouses. | Image courtesy of the Library of Philadelphia

Thomas Carstairs was a bold choice. The assertive Scottish-born architect came to Philadelphia from London in 1780. To announce his arrival he published a boastful advertisement in the daily newspaper Pennsylvania Packet, an action that proved much too forward for the reserved society of Philadelphia in the 18th century. To make matters worse, he requested membership to the Carpenters’ Company rather than being invited by the guild to join, a serious breach of etiquette. They swiftly rejected him. When he was invited to join their ranks a few years later he declined. Carstairs ruffled so many feathers and was such an unpopular hire that Sansom’s houses were his only commission in Philadelphia.

But despite Carstairs’ brashness–or perhaps because of it –Sansom hired him on. The development, named Carstairs Row, was completed in 1803. It is one of the earliest American examples of the rowhouse style in which an entire block of houses was built at the same time in an identical style. Carstairs’ design followed the London plan, which maximized the long, narrow shape of a typical Philadelphia lot by building front and back rooms that utilized depth and featured uniform façades. Carstairs Row was not a hit among critics, who found the uniformity of new construction style boring.

From Publishers Row to Jewelers Row 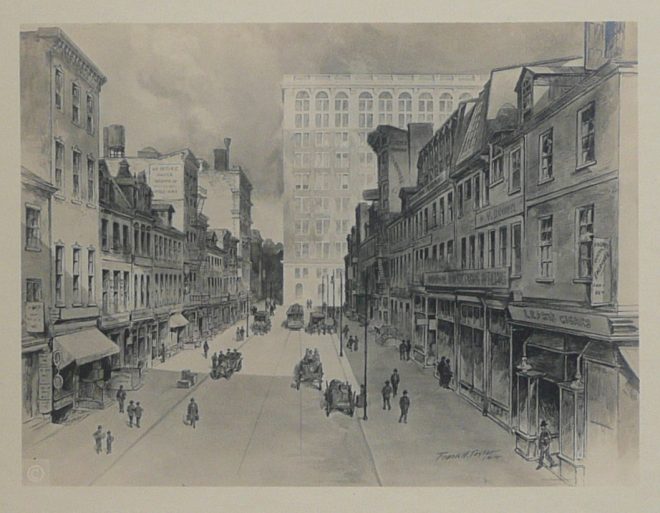 The 700 block of Sansom street transitioned from primarily residential to commercial and industrial uses starting as early as the 1850s, and by the 1870s it was primarily occupied by printing and publishing companies. In some cases, the companies adapted the existing buildings to fit their needs, but in others, including  704 and 706-08 Sansom, the Carstairs Row buildings were completely demolished.

The man who tore them down was Henry C. Lea, a prominent Philadelphian in publishing and politics (Lea Elementary in Walnut Hill is named after him). In 1865 he hired Collins & Autenrieth to design a new home for his medical publishing firm at 706-08 Sansom Street. The company enjoyed great success in its new location, becoming “the largest publisher of medical, surgical and scientific books in the world” between 1865 and 1880, according to the Preservation Alliance’s nomination. It also published and printed the American edition of Gray’s Anatomy in this building (various incarnations of the firm would publish it until 1990). The building’s façade remains largely intact, including the original seven cast iron piers on the first floor. 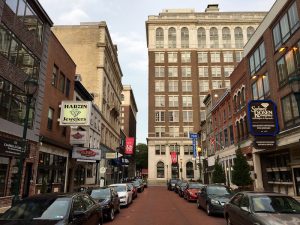 Lea also purchased 704 Sansom Street, tearing it down, and replacing it in 1877 with a building he rented to an electrotype foundry that most likely contracted with his company.  Lea hired Collins & Autenrieth to add a fourth floor and reface the building in 1890. Their alterations in the Victorian Eclectic style included a glazed, multi-colored brick belt courses that aligned with its upper lintels and spandrels, as well as to the tripartite windows on the third and fourth floor. The white vinyl siding covering much of the first floor façade is an addition of more recent vintage.

There is less to tell about 702 and 710 Sansom Street. 702 Sansom Street housed The Irish Catholic Benevolent Union Journal from 1872 to 1894. 710 Sansom Street was the headquarters of The Philadelphia Evening Programme, a theater and arts journal. In 1884, the building was purchased by publishing company Hamilton W.C. & Sons, who specialized in engine-sized writing, envelope printing, and book publishing.

Sansom Street’s change from a publishing enclave to jewelry center commenced around 1900. The common thread between the two industries was engraving, with neighboring jewelers often hiring printers and publishers to carve inscriptions into their finished pieces. Jewelers like George Rublack, who worked on an upper floor of 710 Sansom Street in 1919, would borrow machinery or hire Hyman Zucker, a printer and neighbor on the ground floor, for engraving. The street was known for its concentration of jewelers by the 1910s, and “the glittering plate glass windows of the jewelry dealers” make an appearance in Christopher Morley’s Travels in Philadelphia, a collection of his newspaper columns published in 1920,  By the mid-1920s, the street’s identity as Jewelers Row had solidified, yet coexistence with publishers and printers persisted for a few more decades.

Helen Gassmann and Karly Kessler Helen Gassmann is a project assistant at Hidden City Philadelphia. She holds a BA in History from Temple University and an MA in Public History from Villanova University. Helen resides in West Philadelphia. Karly Kessler is a high school senior at William Penn Charter School. She enjoys writing, random historical tidbits, eye-catching architecture, and buildings in ruin. Karly attended three summer college courses in creative writing and is excited to see her first publication in the Hidden City Daily.