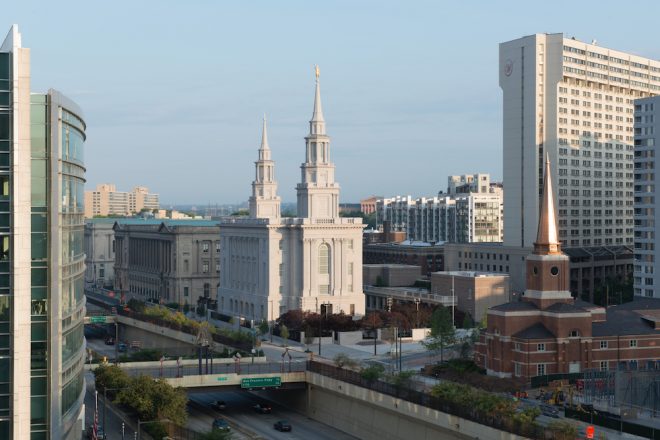 The new Philadelphia Pennsylvania Temple looks like a whitewashed architectural model against the backdrop of the Benjamin Franklin Parkway. | Photo courtesy of The Church of Jesus Christ of Latter-Day Saints

After five years of construction, the Philadelphia Pennsylvania Temple of the Church of Jesus Christ of Latter-Day Saints (colloquially referred to as the Mormon Temple), is just about ready to open its doors. At first glance, the rain-gray Maine granite of Philadelphia’s newest sacred building, set against the Center City skyline of rising steel, rock, and glass, seems somehow superimposed. It’s a lighter grey than the stone of the adjacent buildings on the Parkway, resulting in what might seem an airy illusion, an architect’s digital rendering set against a grounded skyline. But the building has a weight of its own, and its superimposition becomes remarkably consistent with its heavier neighbors once the thoughtfulness of its design is fully understood.

Architectural firms Perkins + Will and FFKR’s monolithic Temple, replete with towers, a golden angel, stained glass, and a public courtyard with trees and benches, purposefully attempts to join the stone giants of the Benjamin Franklin Parkway in a style that reflects the colonial history of Philadelphia and respects the neoclassical monuments of the Logan Square neighborhood. According to Elder Larry Y. Wilson, executive director of the Temple Department of the church, the Georgian-style central design theme was chosen to integrate with the city’s history and surrounding buildings. The railings that lead into the baptismal font in the bapistry, for example, are modeled after those found in the Franklin Institute, across Logan Circle. The two brass quills above the desk in the reception area represent both the writing of the Book or Mormon and the signing of the Declaration of Independence. The chandeliers on the fourth floor, where families go through “sealing ordinances”—ceremonies that bind family members for eternity—are replicas of that in the former Pennsylvania State House, now Independence Hall. The stained glass is washed in Philadelphia flag blue and yellow. 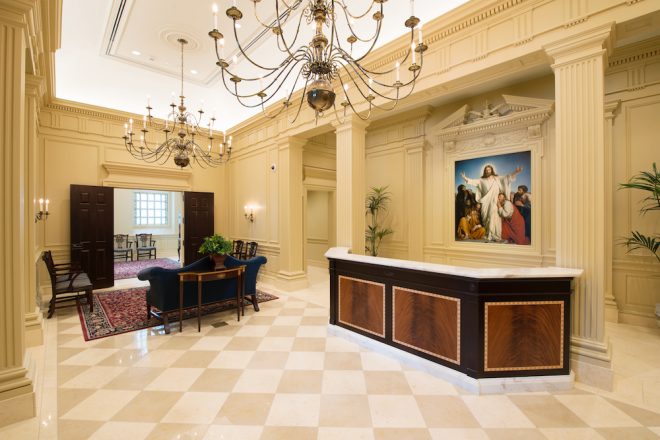 The Recommend Desk in the reception entrance of the temple. | Photo courtesy of The Church of Jesus Christ of Latter-Day Saints

More importantly, perhaps, is how—in an architectural period where thrift is a design element—the Temple’s neoclassical design harkens to a time when buildings were cultural installations on a municipal landscape. Joining the likes of the Franklin Institute, Academy of Natural Sciences, the former Family Court, Free Library of Philadelphia Central Branch, Barnes Foundation, Rodin Museum, Philadelphia Museum of Art, City Hall, and its Catholic cousin, the Basilica of Saints Peter and Paul, the Temple is simultaneously new and appears to have been there all along. The towers, topped by a golden spike on one and a golden statue of the angel Moroni on the other, join other Center City edifices as they reach for the divine, but fit without suture into the fabric of the Parkway.

There are pragmatic and nostalgic reasons the church decided to build a temple on the Parkway (in addition to a public Meeting House for worship and an adjacent apartment tower). Elder Milan F. Kunz explains that when a critical mass of people in an area must travel to great lengths to attend a temple, the decision is made to construct a new building where congregants in the area can find more suitable access. In the greater Philadelphia area, including parts of Maryland, Delaware, and New Jersey, there are over 40,000 practicing Mormons, who, before the Philadelphia Temple, had to travel to New York City or Washington, DC in order to participate in the more holy sacraments of their faith. 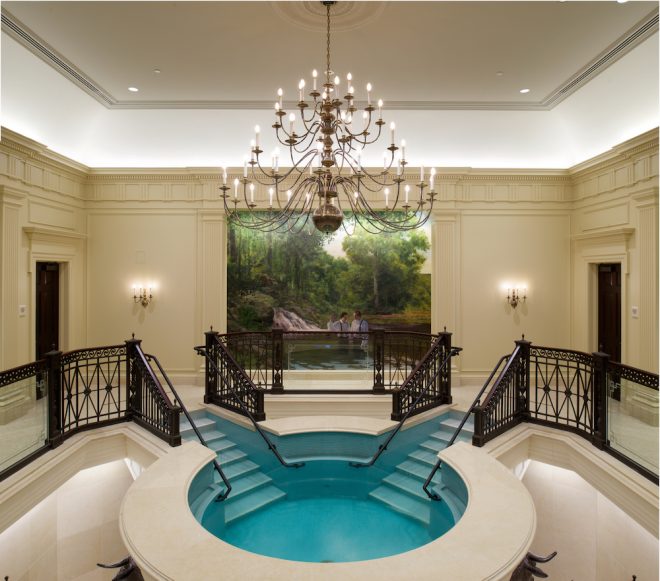 The design of the railing in the baptistry was modeled after those in the Franklin Institute. | Photo courtesy of The Church of Jesus Christ of Latter-Day Saints

More correlated to the Mormon faith’s history, founder Joseph Smith was said to have lived in Harmony, PA and was baptized in the Susquehanna River, making the first temple in Pennsylvania a uniquely special one. In the bapistry, a mural of Smith’s baptism in the river serves as backdrop for the font that rests upon the backs of twelve oxen, which represent the twelve tribes of Israel. Indeed, much of the art in the interior rooms and hallways have significance to the area. In addition to the Susquehanna and Delaware Rivers taking wall space, a painting featuring the signing of the United States Constitution hangs in the reception area, a reminder that, according to the faith, the founding of the United States was divinely inspired.

What may come as a surprise is that there is no congregational worship in the Temple (this is reserved for the Meeting House across 17th street). From street level, such a grand edifice may seem to boast some central space for prayer and teaching, but there is no large room capable of holding more than a hundred or so of the 40,000 person membership. In fact, all of the rooms in the Temple are rather small, meant for personalized sacraments of the faith as opposed to large group worship. It makes the interior feel like an art museum, each room compartmentalizing relics of Philadelphia’s past with minimal religious iconography and a focus on the practical matters of the ordinances. 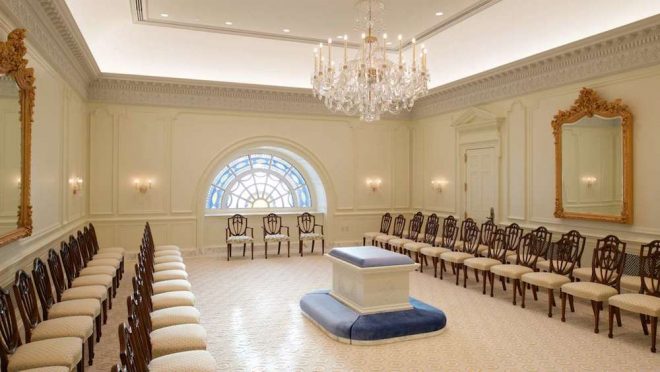 The chandeliers in Sealing Room are replicas of ones in the former Pennsylvania State House. The blue and yellow stained glass is a reference to the colors of the flag of Philadelphia. | Photo courtesy of The Church of Jesus Christ of Latter-Day Saints

In the fourth floor “sealing” rooms, for example, plush-covered alters are surrounded by similar kneelers where couples—either previously married in civil union or completing both the civil and religious unions at the Temple—join hands and are bound to one another even beyond death’s forcible parting. Any children born of the couple may join the ceremony to be similarly bound to the family. When the couple rises, they see themselves in opposing mirrors placed on the walls behind them, creating an infinity reflection suggesting the sealing of the family extends to ancestors and progeny. Maximum room occupancy of the largest sealing room: around 100.

Descending from the fourth floor to each successive floor below, there is a noticeable reduction of ornamentation. Crystal chandeliers cede to brass, carpet disappears to reveal the stone underneath, and ornamented furniture submits to tamer and more utilitarian pieces. According to Elder Wilson, this is all by design. As one ascends floors of the Temple, thusly coming closer to God, they experience a greatening attention to aesthetic detail, suggesting that handsomeness is next to godliness. 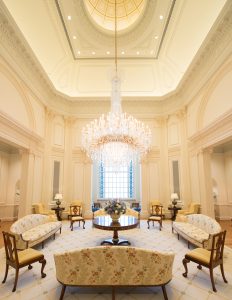 The Celestial Room looks more appropriate for afternoon tea than spiritual meditation. | Photo courtesy of The Church of Jesus Christ of Latter-Day Saints

The crux of the Temple, the Celestial Room, is the largest room in the building. A massive crystal chandelier hangs from a vaulted dome and illuminates a number of upholstered sofas and chairs that could have come from a 19th century European drawing room. Like the rest of the Temple, it is buffered from the outside world by the thick walls of the exterior, which act more than a curtain—they retain the silence necessary for meditation and divine contemplation. Although one may expect a protagonist from a Jane Austen novel with a tea tray at any moment, the effect of the fine detail and purposeful silence presents the room in its pensive regality. “You should see it at night,” Elder Wilson says.

From August 10th to September 9th the Temple will be open for public tours every day of the week except Sunday. On September 18th, the Temple will be dedicated, which means, from that point on, only Mormons in “good standing” who are scheduled to complete an ordinance will be allowed to pass through the reception desk into the inner rooms. This prohibition, however, is not unlike many municipal, corporate, or academic buildings in the city that restrict pedestrian access. What Philadelphia ultimately gets, then, is the building outside, an august edifice implanted into a former parking lot that increases the continuing beauty of the Parkway and joins a list of the city’s most noteworthy architectural monuments.