In Point Breeze, A Queen Anne Washed In Swedish Mystery 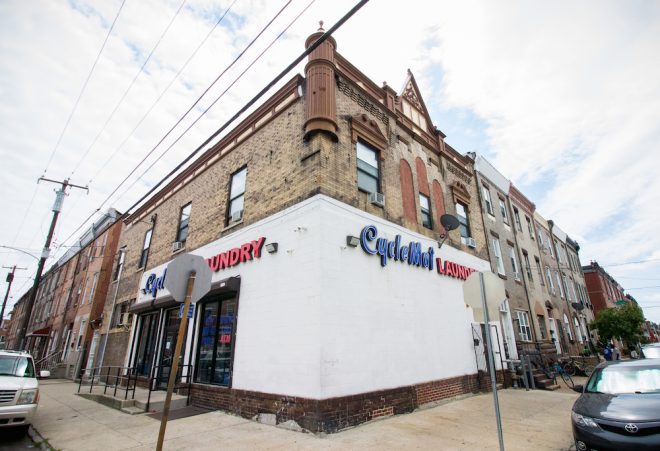 This wash and fold could be the last remaining vestige of The Homestead, a 19th century Swedish family estate in Point Breeze | Photo: Michael Bixler

The richly detailed apartment house and laundromat on the corner of 18th and Moore Streets in Point Breeze may be one of the only remaining pieces of a large property once known as the The Homestead, an estate owned by a real estate-savvy Swedish South Philadelphia family. With its mini-turret, symmetrical fenestration, Queen Anne detailing, and heavy pedimentation, the building, in any case, even despite the laundromat’s obliteration of the original first floor configuration, stands quite apart from its neighbors.

Farmers, the Shetzline family settled in what is now South Philadelphia, acquiring a large piece of property in Point Breeze. Their land was not located within the Point Breeze neighborhood boundary we know today, but the actual “point” off the Schuylkill River that Point Breeze Avenue approaches. When the City consolidated with the many townships and villages in Philadelphia County in 1854, the Shetzlines lived in what was known as the Swedish Glebe House, a parsonage occupied by a Swedish congregation at the turn of the 17th and 18th centuries that the congregation had abandoned in 1727. The old clergy residence stood until the 1960s. The site is now occupied by the Hagemeyer North America Philadelphia Servicing Branch.

Toward the end of the 19th century, some members of the Shetzline family began buying up swaths of land for their own farms and other business ventures. In the 1870s, David Edward Shetzline bought a large, irregular piece of property surrounding Chevy Chase Lane, a long-gone diagonal path that ran perpendicularly northwest from Passyunk Avenue and turned 90 degrees at what is now the 1800 block of Moore Street. Although the current arrangement of blocks and streets had already been planned, Shetzlines farmed the land, seemingly ignoring the rapidly approaching row house developments closing in on all directions. He also farmed large properties he purchased within the vicinity of what is now 12th, 13th, and Wolf Streets and the 1300 block of Hunting Park Avenue.

David Shetzline died in 1885 and his many parcels went to his children, land largely controlled by his sons Henry and Reuben Shetzline. Henry became incensed with the City in 1891 when the municipality opened up both 18th Street and Moore Street straight through the Shetzline Homestead and then laid a sewer pipe right through the family’s land on what is now the 1700 block of Mifflin Street.

After a failed lawsuit seeking composition for damages done to his land and business, Henry acquiesced, seeking profit. In 1892, he built houses along the 1700 blocks of Morris and Watkins Streets. Henry’s son, Charles A. Shetzline, went on to become a major real estate broker and developer in the city in the early 20th century.

The remaining farm buildings on the Shetzline Homestead were cleared by builder William Shelly in 1895 to make room for 130 houses. This is where the mystery comes in, because right before this clearing occurred, the ornate building at the southeast corner of 18th and Moore appeared in City records.

Our research indicates that the Pennsylvania Historical and Museum Commission is the only organization to ever take note of this building’s presence. The Commission’s record for this property only has two pieces of pertinent information; it theorizes that the building was built in 1894 and that the architect was Samuel Milligan.

Milligan was a prolific architect mostly known for church buildings and large suburban houses before joining up with Frederick Webber and going on to design a number of attractive Philadelphia buildings that still stand today. The Belgravia Hotel (aka Peale House), in Center City, and Hamilton Court Apartments, in West Philadelphia, are the most notable. Therein lies the million dollar question: could this building have been designed by Milligan as a large city home for a Shetzline?

The building is in the Queen Anne style, with its front façade facing 18th Street and northern side facing Moore Street. What remains of the façade are stone and metal details obviously created for a high-end client. There appears to be no way to verify if this was a Shetzline-related house, but it is confirmable that the building is located on the old Shetzline homestead land. The next record of its existence comes in 1899, when City inspectors made a visit to a bread factory located there. 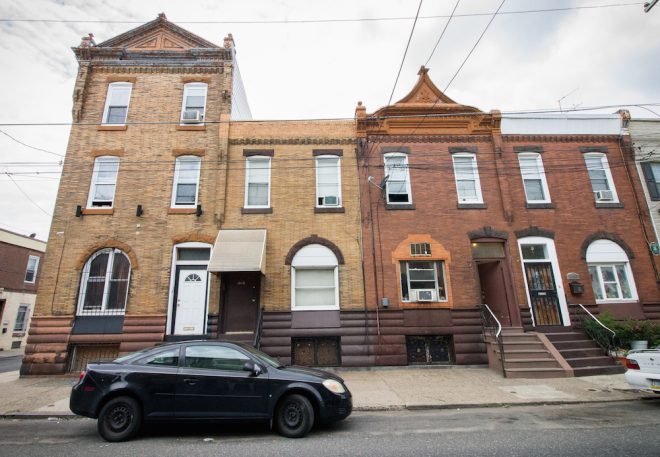 This ornate set of rows a half a block away from the corner building at 18th and Moore might just be a Shetzline-Milligan co-production. | Photo: Michael Bixler

By 1900, Patrick Keough was running a dry goods warehouse in the building and stuck around until at least the 1910s. Keough was an Irish immigrant who ran a dry goods business that primarily sold men’s clothing. He became president of the Independence Building Loan Association and the International Union of Steam Engineers Local 104.

In the 1950s, the building had a grocery store on the first floor, and, with a billiards craze sweeping the city, featured a pool hall on the second floor that was accessable by a stairway at back of the building. After a brief period as an embroidery shop in the late 1950s and early 1960s, the first floor became a food market; when that failed, another took its place. Day’s 18th Street Market, named after owner Donald E. Day who told over the space in the 1970s, was the last grocer to occupy the space–new owners of the market space carried over Day’s name into the 1990s.

In 2002, current owner Binh Quach purchased the 4,080 square foot building and overhauled the interior. By 2003, the upper floor had new apartment units and Cyclemat Laundry opened on the street level.

The building at 18th and Moore could very well be a remaining piece of the Shetzline legacy and it is not alone. The vast majority of row houses built in Point Breeze by Henry and Charles Shetzline still stand today. Even more mysterious than the corner building at 18th and Moore is Shetzline Park, a little-known, short-lived, 18,000-seat baseball and boxing venue that operated at Broad and Bigler Streets in the early 1920s. All that is known about the park is that the semi-pro, independent baseball team called the South Phillies once claimed it as their home field. It is not even known if the park was an actual piece of athletic architecture or if it was just an enclosed section of what we now call Marconi Plaza. It doesn’t appear on any maps and is never described with an actual address. Now that is a mystery.