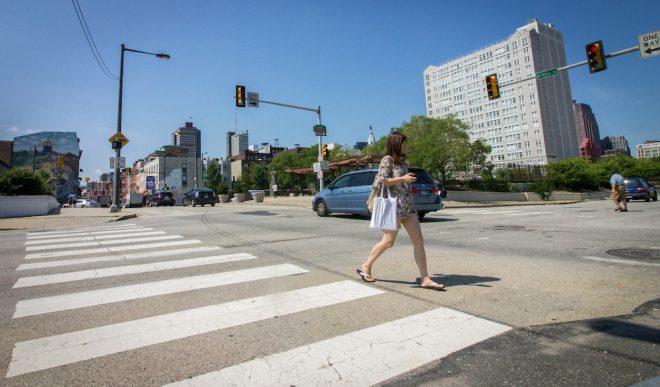 Easier said than done. Crossing Vine Street at 10th Street at any hour comes with a small dose of pedestrian anxiety. Vehicles exiting the Ben Franklin Bridge and crosstown commuters often treat the thoroughfare like a highway | Photo: Michael Bixler

Last week, the U.S. Department of Transportation held an intensive two-day workshop to reimagine Vine Street from a crosstown thoroughfare with an interstate pit running down the middle to a gracious, urban boulevard bridging Chinatown with the quickly redeveloping Callowhill neighborhood. The forum, “Rethink Vine Street Expressway,” part of the U.S. DOT’s Every Place Counts design challenge, was hosted by the Philadelphia Chinatown Development Corporation and attracted some 50 members of the design community to weigh in. Representatives from City departments, the Delaware Valley Regional Planning Commission, the Pennsylvania Department of Transportation, many of Center City’s major planning and engineering offices, and the general public packed into the Chinese Church + Center at 1101 Vine Street on July 16 and 17 to discuss potential street improvements along Vine.

In 2015, PennDOT began a four year, $64.8 million project to replace seven structurally compromised bridges along Vine Street near Logan Square, making the timing of the forum all the more pertinent. Bridges at 18th Street, 19th Street, 20th Street, 21st Street, 22nd Street, Benjamin Franklin Parkway and 20th Street, and the pedestrian bridges at the Free Library and Family Court, are all being replaced. A new section of grade-level public space in front of the library will cover a small section of I-676.

But will this opening gesture lead to further transformation? And, if so, how?

The challenge award, presented to the PCDC, provided two days of technical assistance from the U.S. DOT and industry experts to aid in the rethinking of transportation infrastructure choices at the federal, state, and local level to improve the quality of life of surrounding communities.

Pie In the Sky 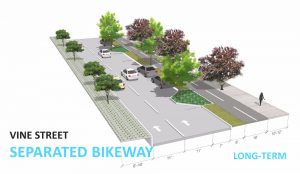 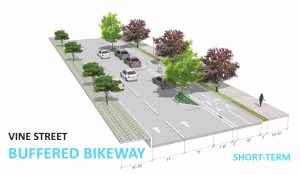 “If money were no object, if you could build anything you want, what would you do?” asked Secretary of Transportation Anthony Foxx. In the first public meeting held last Thursday ideas flew across the cool church sanctuary with gusto, ranging from the common to the visionary. Cap Vine Street. Fix the bridges and underpasses. Slow down traffic on the surface street. Run a bicycle track down Vine. Remove the noise walls. Make the Rail Park happen. Someone even suggested a monorail.

For participants, the most instructive part was the walking tour on the first day, guided by Sarah Yeung, PCDC’s planning director. Yeung pointed out the 8th and Race Streets “Chinatown Lot” where, in the 1960s, the Philadelphia Redevelopment Authority took possession of the parcel to incorporate it into the Independence Mall redevelopment district, a plan that never transpired. She also pointed out where PennDOT, in the 1980s, had taken the two big lots spanning the 1200 and 1300 blocks of Vine Street to work on the Vine Street Expressway. Other points of positive progress were the old warehouse that was converted into the Folk Arts-Cultural Treasures Charter School, a Mandarin-intensive K-8 program, Post Brothers’ Goldtex Apartments, and, hovering above it all, the Reading Viaduct.

Following the walking tour, representatives of the U.S. DOT conducted several facilitator-led exercises. The task was daunting. One facilitator, a volunteer only willing to give his name as Jonas, described the process as “attempting to advance an agenda that had yet to be formally defined.” However, much like the evening public meeting, the afternoon workshop showed a strong shared vision–Vine Street has to be connected back into the urban fabric, a divisive seam that needs to be reconfigured as a center. 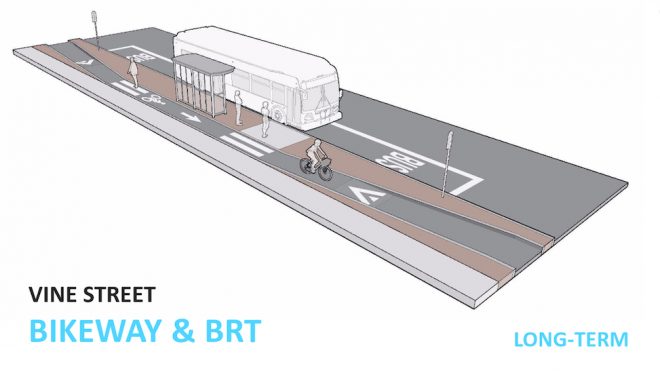 On the second day the group moved to the next steps: developing a plan and the political and financial capital to implement it. Physical improvements and deliverables in the short, medium, and long terms.

Several consultants from the Congress for the New Urbanism, who were charged with recording and rendering meeting ideas since the beginning of the first day, led the final presentation. They presented rough, hand-drawn sketches of visions shared for the transportation corridor. Ridge Avenue was realigned into shared space south of Callowhill. A retail pagoda straddled the Expressway. The consultants presented a boardwalk on top of the Expressway with gaps left open to vent the traffic fumes below, an idea that facilitator Sandy Sorlien likened it to “a boardwalk over top of a river of cars.” Attendees were eager and their ideas were filled with potential.

There were two major problems with the ambitious forum. The first was that no mention was ever made of the 2013 Callowhill-Chinatown North Strategic Plan. Doug Robbins, a senior planner and urban designer for the engineering firm Aecom, aired this concern to the group on the second day, mentioning that he had seen a copy of it on the CNU designers’ desk. No mention had been made of the 2004 Chinatown plan either.

The second was logistics. There were great ideas, but the values that lead to a plan and figuring out how to implement them were missing. Also, the overall vision was certainly clear and universal, yet substantially inspired by familiar concepts. These were the same recommendations that had been brought up in every Chinatown neighborhood plan since the Expressway had first been built 30 years ago. It appeared that the facilitators were simply interacting with a community that already had a strong shared vision in place. 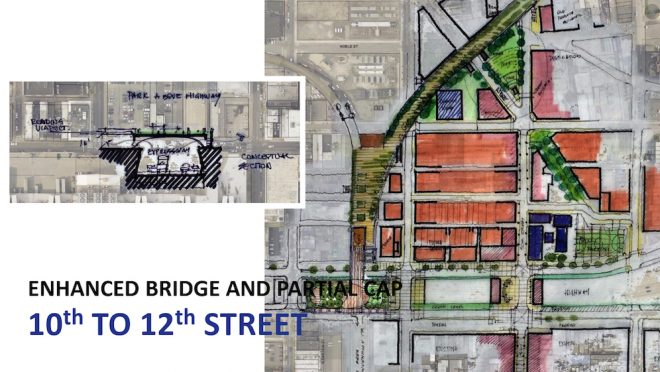 Phasing in partial caps and bridge enhancements with the goal of completely capping the Expressway from 10th to 12th Streets could be the most sensible approach, fiscally and logistically | Rendering: Congress for New Urbanism

The final issue, voiced by Stephanie Gigidbi, U.S. DOT director of strategic initiatives, was that of agency. The rushed program had left no time for movers and shakers in the design and planning community to develop meaningful connections with neighborhood stakeholders. Even PCDC staff were unsure how they would follow up. Mention was made of hiring a consultant, but no clear picture of their own next steps were addressed.

Perhaps the workshop’s greatest success was driving home the understanding that Vine Street, and the way it divides Center City from points north, is dangerous and problematic for every user–drivers, cyclists, bus riders, and pedestrians alike–and raising federal awareness that this needs to be fixed should be a priority going forward. A sidelong comment brought home the point that, as far as long-range planning went, now was the time to start.

Few of the recommendations that came out of the two day workshop were ground-breaking. However, most participants agreed that the walking tour, which crystallized the extent of Vine Street problems, and the fact that the U.S. DOT was there at all, suggests that a walkable Vine Street could be earmarked for federal money if and when it is made available.