In West Kensington, A Primer On Early School Design 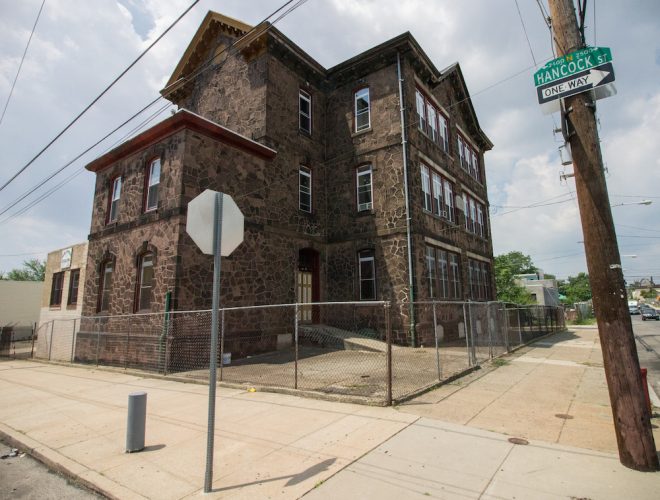 The Cumberland-Farrgut School, an exemplar of the School District of Philadelphia’s Samuel Sloan Plan, adds Italianate flair to the corner of Cumberland and Hancock Streets | Photo: Michael Bixler

In the earliest days of the School District of Philadelphia, not much consideration was given to the design and utility of a school building. Unlike today, the School District, established in 1818, was highly decentralized, containing semi-autonomous administrative units representing local wards and neighborhoods. It wasn’t until 1851 that the city’s Board of Controllers began to evaluate the most efficient and effective way to educate youngsters within a single building. The brownstone trimmed, Italianate David Farragut School at 170 West Cumberland Street in West Kensington stands as a founding example of this paradigm shift.

Esteemed Philadelphia architect Samuel Sloan came up with a plan that was so successful that its influence stretched well beyond the city. Known as the Sloan (or Philadelphian) Plan, each floor of a school building would consist of a single room that could be split into as many as four classrooms accessed from exterior stairwells. Over the next four years, 25 new school buildings were constructed in Philadelphia using the Sloan Plan. After the Civil War, the School District put up another 35; 19 of them were designed by another school architect, James C. Sidney. While Sidney followed the Sloan interior plan, employing stone, he transformed the look of the schools.

In 1867, local architect Lewis H. Esler became the School District’s first superintendent of buildings. An admirer of both Sloan and Sidney, Esler adapted their ideas and made minor, but pertinent, improvements.

Under Esler’s leadership, Philadelphia city councils passed an ordinance June 25th, 1872 calling for a new school building to be erected at the southwest corner of Cumberland and Hancock Streets in a rapidly growing industrial neighborhood we now call West Kensington. Contractor James McCormick was commissioned for the task.

Construction was delayed, perhaps due to the Panic of 1873, and McCormick was given an extension to complete the project by January of 1874. More delays must have followed, because the new school did not open until 1876. Upon completion, the Nineteenth Section School #7, commonly known as the Cumberland Schoolhouse, had the distinctive shape of a Sloan Plan school but with a façade of both brownstone and limestone with copper cornices. Each pitched roof was capped with an ocular window. 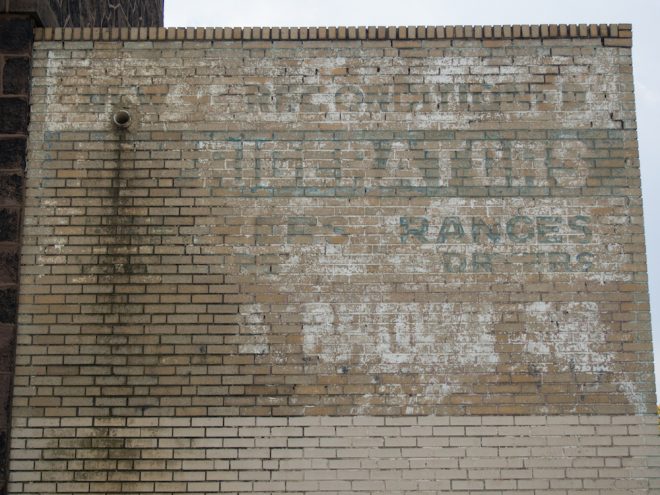 Officially renamed the Cumberland Combined Primary and Secondary School in 1894, the now expanded facility served the children of factory and mill workers. The new name reflected changes in pedagogy and the desire to educate past sixth grade. In 1913, School District officials renamed Cumberland Combined the David Farragut School, after the first U.S. Naval officer to hold the rank of Admiral.

Talks of modernizing and expanding the Cumberland-Farragut school began as early as 1903, but it wasn’t until June 1915 that contractor H. E. Baton was engaged to build a $12,111 addition following a new template that Lewis Esler approved. The expansion significantly added space to the building, while staying true to the building’s preexisting façade design. A few decades later, two tiny, one-story additions were built under the designs of prolific school architect Irwin T. Catharine.

The Cumberland-Farragut School, already extremely small and dated by facility standards of the time, closed in the early 1940s. Joseph and Esther Trost, who intended to manufacture and sell novelty rugs in the building under the name Quaker Rug Company, purchased the school in 1943. The Trosts went back and forth with the Zoning Board of Adjustments, which granted them a Temporary Non-Conforming Use permit for one year to allow the school, on a row house street, to be used for manufacturing. The Trosts abandoned their plan.

In 1956, Fred A. Brown purchased the building and moved his electrical appliances business, the Fred A. Brown Company, into the building, assuming that the use of the building as a wholesaler and repair shop for electrical appliances would be acceptable. In 1961, members of the Zoning Board finally remembered that the industrial use granted to the Quaker Rug Company in 1943 was only supposed to be temporary and pursued legal action against Brown.

Brown was able to get a more permanent zoning variance and his company stayed in the building for three decades. In 1972, Brown did an unsightly repair to the eastern wall of the building, where four windows were boarded up and the stone exterior was covered in concrete. The patch is still very noticeable today and has an inexplicable “door to nowhere” in place of one of the windows. 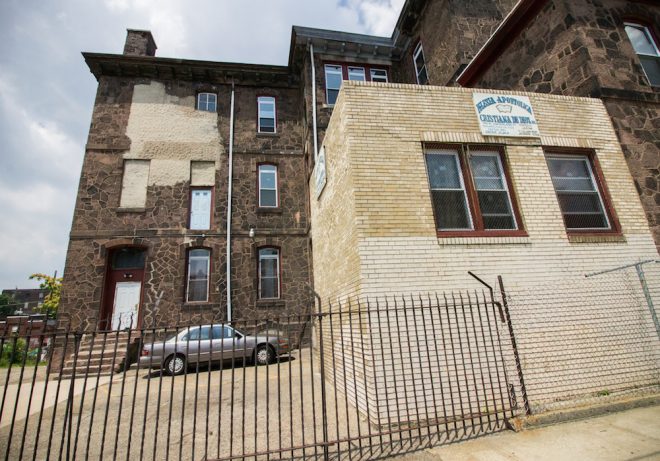 Brown sold the building in 1988 to Reverend Nieves Olmo, who opened the Apostolic Church of God (Iglesia Apostolicas Cristiana de Dios) there. Today, the church still uses the former school, but the building is showing its age. The surrounding neighborhood, once alive with industry and densely packed residents, is characterized by vacant lots and abandoned buildings.

In 1986, the building, along with many other old Philadelphia school buildings, were placed on both the National Register of Historic Places and the Philadelphia Register, which legally protects the building from future demolition. This legal protection isn’t foolproof for old school buildings; the J. Sylvester Ramsey School, built in 1850 at Pine and Quince Streets in Washington Square West, was designated at the same time as the Cumberland-Farragut School, but was razed and replaced in 1990 by a condominium called Kahn Park Place.

A great example from the Lewis Esler era of Sloan Plan schools with exquisite stone façades still stands at 5933 MacCallum Street. The old Germantown Grammar School is now occupied by a day care center, the Small World Discovery Center. Its well-kept appearance offers a glimpse of what the Cumberland-Farragut School looked like over a century ago.