Bookish Beginnings And A Bar Incognito At The Bird Building 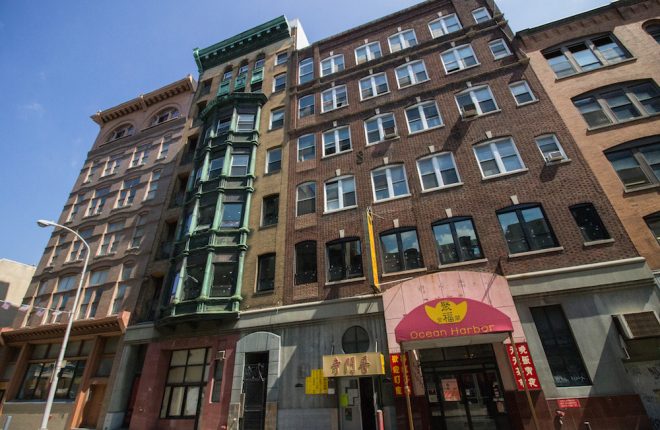 On the 1000 block of Race Street, a vertical set of stately iron bay windows tarnished emerald-green climb up the chest of a 100-foot tall warehouse that has maintained a graceful pose in Chinatown for 113 years. Built on speculation in the early 1900s, 1029-31 Race Street has played host to a subscription mail order library, held numerous printing companies and clothing manufacturers, and was even home to the makers of “Florida Water,” a perfume that was inspired by Ponce de León’s Fountain of Youth. Today, the only action the vacant building sees is the line on the weekend for popular dim sum destination Ocean Harbor next door, or so it would seem. Without a sign out front or any indication of occupancy, the building’s mysterious sole tenant, the Hop Sing Laundromat cocktail lounge, keeps a low profile at street level, while holding the esteemed title as one of the 30 greatest bars in the world.

Business By The Books

Not dissimilar from the present day construction boom, Philadelphia around the turn of the 20th century blossomed with new buildings. The 1000 block of Race, like many others in what we now call Chinatown, began as a row of large houses on each side in the early 1800s. Most homes in this area transitioned into commercial space in the fourth quarter of the 19th century. By the beginning of the 1900s, many were replaced by large office buildings, lofts, and factories.

The last uses of the two large houses that once occupied the site of 1029-31 Race Street were the Thomas Cooper Residence and the office of prolific contractor and developer Joseph Bird. Bird’s own namesake building, the Bird Building, was completed in 1900 directly behind 1029 and 1031 Race Street. Bird was also a partner with the Allentown-based Adamant Cement Company. Shortly after completing the Bird Building, his construction firm went from building row houses and saloons to erecting commercial lofts and houses of worship.

Bird acquire 1031 Race Street and announced in January, 1902, that he would begin construction on a speculative, 100 foot tall, seven story loft and manufacturing building on the site that following February. The $15,000 building would have a brick facade with galvanized iron bay windows, a pronounced cornice, and decorative elements that would include Bird’s initials, JB, near the top of the building.

Due to a lack of records, the architect on the project cannot be confirmed. However, Charles Balderston, at the time the go-to architect for buildings of this type in this area, was likely the designer, as this one includes similar design attributes. 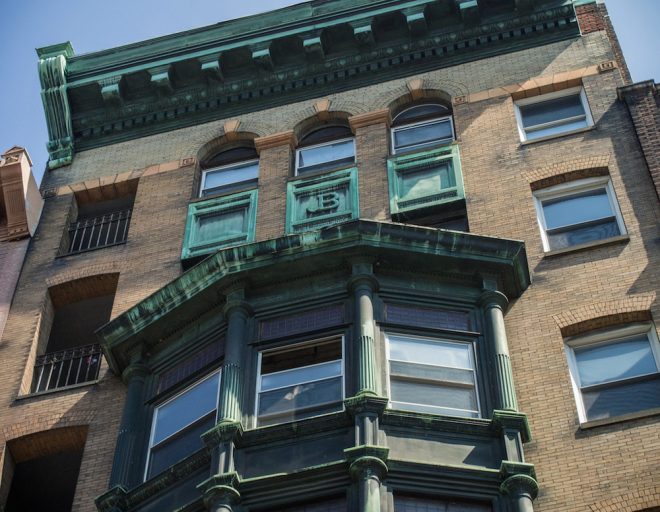 The first use of 1029-31 Race was as the storage and distribution center for the Tabard Inn Corporation’s conglomerate of subscription library book companies: the Booklover’s Library, the Philadelphia Bookstore Company, Tabard Inn Library, the Bodley Club, and the Library Publishing Company. Together, these companies operated as a network of private libraries that claimed in 1905, at the corporation’s height, to have 155 stations where members could borrow and return up to around 3,000 different titles, many of which were published by companies that were also part of the corporation. Tabard was indeed the Netflix of its time. Around 40,000 books a month were said to be moving in and out of 1029-31 Race Street. They also published Booklover’s Magazine there, a subscription publication that served as a catalog for the corporation’s circulation libraries. The periodical had articles about the books the Tabard organization distributed and its other products and services. Efforts to keep the operation running around the clock lead to the installation of a power plant that only served 1029-31 Race Street. The offices of these library companies occupied the building next door at 1023-27 Race Street.

Seymour Eaton, a former teacher and children’s book author, was president of the companies under the Tabor Inn Corporation. He was later sued by a number of printers and publishing houses that he never paid for work delivered. Tabard stockholders legally challenged Eaton for the interwoven relationships among the member firms of the corporation and for stock value manipulation. Nonetheless, by the time he died in 1916, Eaton was lauded as a great educator for spreading love of reading around the country and for being one of the several people credited with creating the term, “Teddy Bear.”

The Fragrance of Manufacturing

Starting in 1910, the building was occupied by several companies at once, the vast majority doing the kind of work the neighborhood was known for at the time–printing and publishing, clothing manufacturing, and chemicals. 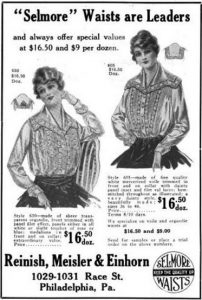 Schandein & Lind produced perfumes and colognes at 1029-31 Race from 1916 to 1922 and was best known for Garwood’s Perfume and Garwood’s Florida Water, both holdovers from Sylvester S. Garwood’s perfume business that Schandein & Lind took over at the turn of the century. “Florida Water” was a unisex cologne named after Spanish explorer Juan Ponce de León’s mythical Fountain of Youth in St. Augustine, Florida.

In the early 20th century, American women were still prone to wearing shirt waists and puffy blouses decorated with embroidery or lace. There was myriad of shirt waist manufacturers in Philadelphia and 1029-31 Race was no exception. Ost Brothers, Reinish, Meisler, and Einhorn, Blitz & Company, Fair Main Waist Company, and Liberty Knitting Mills all spent some time at 1029-31 Race.

Many different companies rapidly came and went–Farm Journal, still in Philadelphia at 30 South 15th Street, was published here for a short period. Others stayed for the long haul. Penn Bookbinding Company and the Entite Press used the building too.

Penn Bookbinding Company, which produced looseleaf binders, was the venture of a Russian immigrant, Max Gudis. Gudis ended up patenting his own designs. The company used 1029-31 Race for at least 25 years and Gudis himself owned the building in the mid-20th century.

The Entite Press, a printing, distribution, and graphic services company, wears the crown for inhabiting the building the longest. The company set up operations there in 1935 and moved to Medford Lakes, New Jersey in 2001, where it is still in business today. 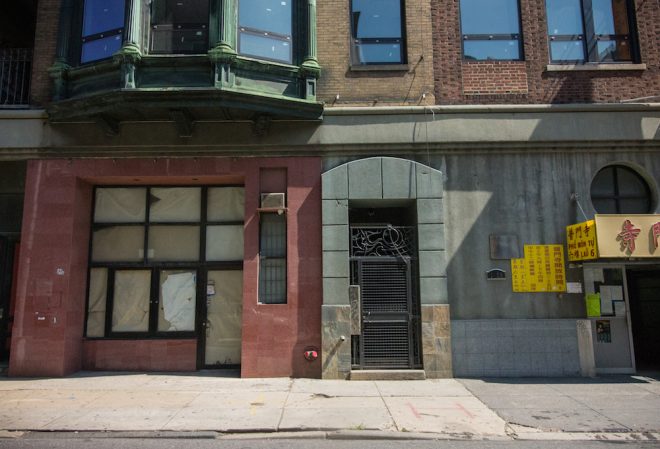 In 1986, the Pan Am Race Street Investment Partnership purchased the two properties from David Einstein for $750,000. Textile manufacturers along with Entite Press continued operating in the building into the new century.

Today, the building at 1029-31 Race Street appears abandoned from the outside, a partial illusion made famous in the last five years by the mysterious Hop Sing Laundromat, a speakeasy-style bar without a street sign that moved into a small part of the building in 2011. Last year, Hop Sing made Conde Nast’s list of the 30 greatest bars in the world. However, according to the permit application they filled out in 2010, the rest of the building appears to be vacant.