The Fabulous House Of Mrs. Fox 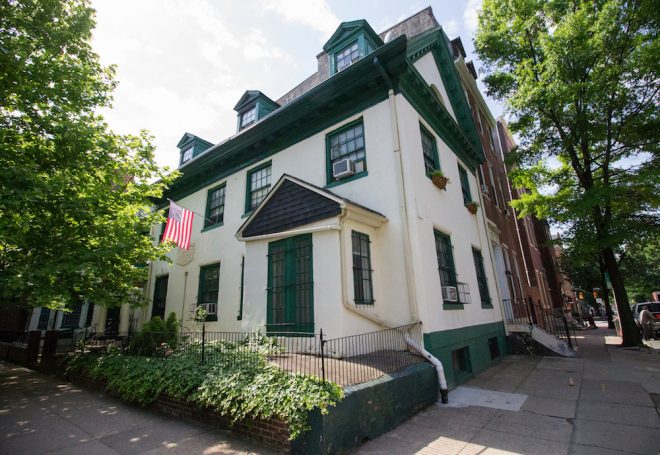 One of these things is not like the other. This former mansion at 10th and Clinton Streets is an eye catcher amid a pretty uniform block | Photo: Michael Bixler

The cream and green early Colonial Revival style mansion at the corner of 10th and Clinton Streets in Washington Square West is like nothing else in the neighborhood. It is stucco-covered and setback from the street with a pointy pitched roofed on a block of tall row houses and boxy apartments–sprawling, and cottage-like amidst the rectilinear grid.

Rebecca Clifford Fox, widow of a successful civil engineer, William Logan Fox, built the fanciful house in 1906. Her husband, who died at 28, lent significant contributions to the design, construction, and financing of two bridges over the Clarion and Allegheny Rivers outside of Foxburg, a small town along the Allegheny River named for the Fox family. He became integral to the construction of two railroads that would later connect eastern and western Pennsylvania, while also starting his own newspaper. William Logan Fox died in 1880 while running to catch a train. 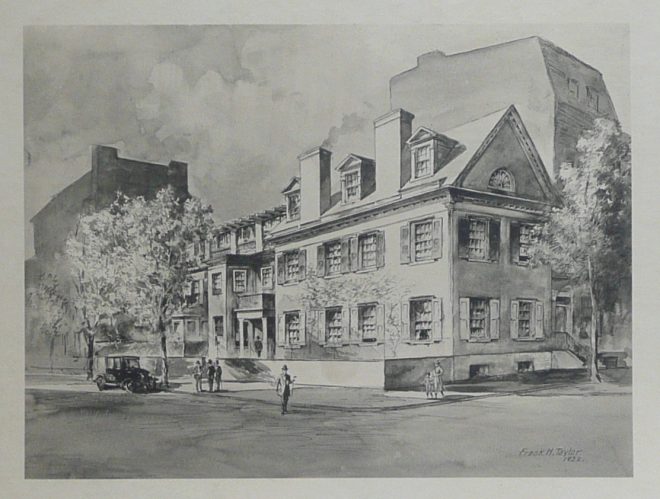 Rebecca Clifford Fox commissioned the short-lived firm of Newman & Harris, designers of the Corn Exchange National Bank at 2nd and Chestnut and the Fels Residence (now Fels Institute of Government of the University of Pennsylvania) to design a three-story, $50,000 house at the southeast corner of 10th and Clinton Streets. Smith Hardican Company demolished the existing mansion on the corner and built Fox’s fairy tale lair. Yet it’s unclear if Mrs. Fox ever lived there.

Research confirms, however, that she was actively engaged in the civic life of elite Philadelphia during its heyday. She helped lead several aristocratic women’s organizations like the Civic Club, headquartered at 13th and Spruce Streets, and the National Society of the Colonial Dames of America on the 1600 block of Chancellor Street.

In 1917, Helen Struthers Ellis, another widow of a notable Philadelphia businessman, moved into the house shortly after the death of her husband, Rudolph Ellis, president of the Fidelity Trust Company of Philadelphia. Ellis was also a director of the Pennsylvania Railroad and director of American Telephone & Telegraph. 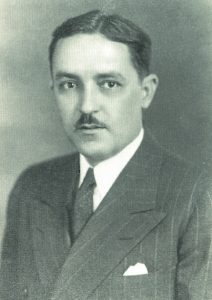 Struthers only lived there for a few years. In 1920, the building was altered under the designs of Paul Philippe Cret for for the Aesculapian Club, a fraternal organization for doctors (Asclepius is a Greek and Roman god of medicine). This reuse is a result of the expanding prominence of nearby Pennsylvania Hospital and Jefferson Medical College–a Center City legacy. The clubhouse offered event, meeting, and banquet space for the Aesculapians and other organizations.

But several physicians also operated medical practices here, including Dr. Guy Maurice Nelson, of Jefferson Medical College, who contributed to the definitive academic compendium on gall bladder treatment. Nelson maintained a practice at 928 Clinton Street while working at Jefferson Medical College from 1936 to 1942. Later in his career he published articles about Codeine addiction.

In 1945, the property was acquired by Adolph Apt, who reconfigured the mansion into seven apartments. He went back and forth with zoning over the alterations, contending that there was a general shortage of apartments available in the neighborhood. After work was complete, Apt was unsatisfied. In 1947, he added yet another apartment, bring the number of units up to eight. Apt added a new entrance to the building on its west side in 1953, filling the setback corner at 10th and Clinton Streets with asphalt. To this day, the oddly mangled alteration has managed to survive, but it does not appear to be used as an entrance. 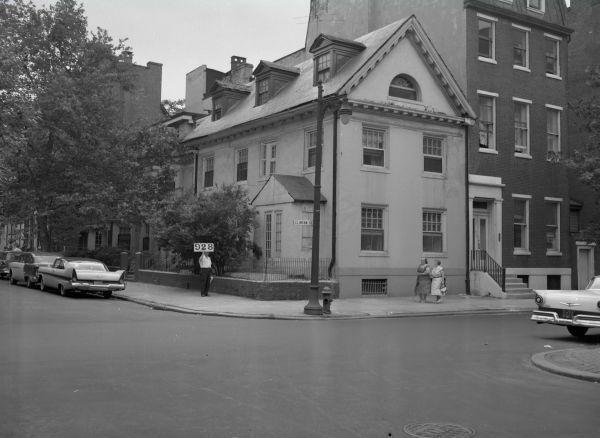 The corner of 10th and Clinton Streets in 1958 | Source: PhillyHistory.org

Apt died in 1959, but not without stuffing a few more units inside, bringing the total up to ten. Bernard Revsin, the succeeding owner, legalized the additional units (after legal battles with the City over the zoning, finally getting approval in February 1960.

New owners took over in 1984 and performed a major façade restoration in 1999. The building was put on the market in 2001 and was purchased by its current owner, Michael Singer Real Estate, for $650,000. Singer has offices nearby and both owns and operates many of the apartment buildings in the neighborhood, including several along Clinton Street. Today, the building is known as Clinton Commons and still has 10 apartments.