Rare Views And Vivid History Of Independence Hall At The Athenaeum 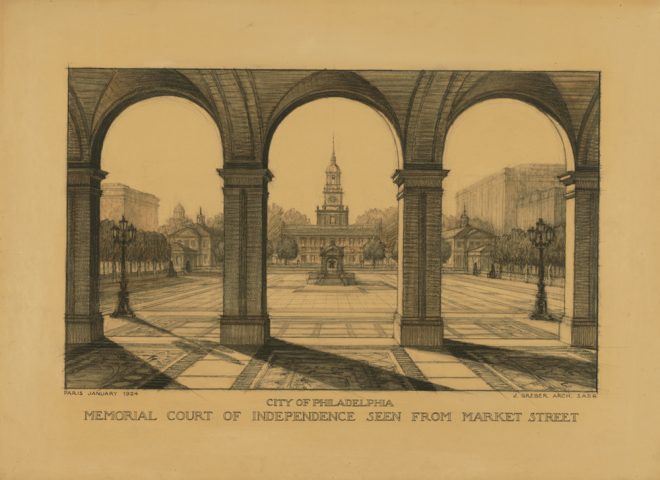 Drawing by Jacques Gréber, the landscape architect who designed the Benjamin Franklin Parkway, of plans to surround Independence Hall with a Palladian arcade with a “Great Marble Court for Public Gatherings” with a pavilion at its center to house the Liberty Bell | From the collection of The Athenæum of Philadelphia

While bocce ball and beach blankets are on most of our minds as we head into the Fourth of July weekend, the Athenaeum of Philadelphia is celebrating the birthplace of America with an exhibition, Views of Independence: 250 Years of Images Depicting Independence Hall and its Surroundings. This salute to the 100th anniversary of the National Park Service features architectural drawings and photographs, rare prints, including the first drawing of Independence Hall, and design proposals for Independence Mall selected from the collection of the the Athenaeum. Through manuscripts and in-depth interpretive documentation, the exhibit traces the origins of Independence Hall back to the commissioning of the main building for a State House that was constructed between 1732 and 1748 by master builder Edmund Wooley and lawyer Andrew Hamilton. The state government would later ship off to Lancaster in 1799.

The exhibition is a fascinating gallop through time that reveals over two-and-a-half centuries of obscure historic context about the evolution of a national treasure and the shaping of the cradle of liberty. For instance, in 1828, William Strickland, the architect of the Merchants’ Exchange Building in Old City, First Unitarian Church of Philadelphia, and the Philadelphia Naval Asylum at 24th Street and Grays Ferry Avenue, was hired to design a new tower for Independence Hall, a project that is considered to be Philadelphia’s very first historic restoration.

Bruce Laverty, curator of architecture at The Athenaeum of Philadelphia, will present a gallery talk on Wednesday, July 6 at 12 noon. See registration details HERE.

Views of Independence: 250 Years of Images Depicting Independence Hall and its Surroundings is on view at the Athenaeum of Philadelphia at 219 S 6th Street until September 2. Admission is free to the public.