Long Before The SEPTA Key: A Penny Ride On The Omnibus 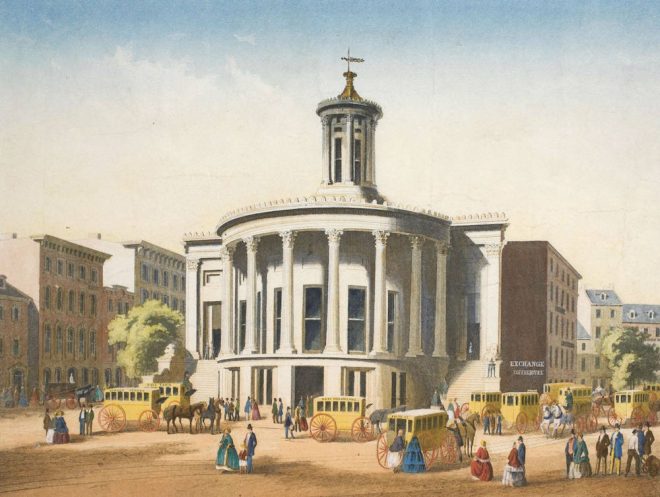 In 1830, with multiplying demand for cheap and rapid transport from the center of Philadelphia to rapidly growing outlying districts, like Northern Liberties, Philadelphians crowded onto the horse-drawn omnibus, the latest in transit innovation. The earliest American omnibus–city cousin of the stagecoach–went into use in New York in 1829. The term omnibus came from Paris, where the transit form originated in 1819.

James Boxall, an innkeeper at the Upper Ferry (or Fairmount) Bridge over the Schuylkill River at Callowhill Street, opened Philadelphia’s first scheduled omnibus line on December 7, 1831. Boxall’s Accommodation, as the service was called, made hourly trips along Chestnut Street from Schuylkill Seventh Street (Sixteenth Street), to the Merchants’ Coffee House and Place of Exchange–reconstructed and reopened as City Tavern in time for the 1976 Bicentennial celebration–on Second Street. At the start, Boxall was the lone driver of the omnibus as well as the line’s ticket agent and conductor. He advertised the omnibus, pulled by two horses, as an “Hourly Stage Coach” that would stop to pick up passengers at any point along the way. This early transit line evolved into the streetcar then bus routes 21 and 42, along Chestnut Street.

Visual records of Boxall’s service remain elusive, if any exist at all. Written accounts do report that the plodding omnibus was painted dark green and looked similar to a chariot. It was set up high on its wheels and had four to six seats running from side to side, much like a contemporary bus. Iron steps on both sides gave access into the bus, which allowed the rapid entrance and exit of passengers. The vehicle was likely equipped with iron-clad wooden wheels and a primitive suspension system, although the ride must have been bone-jarring. 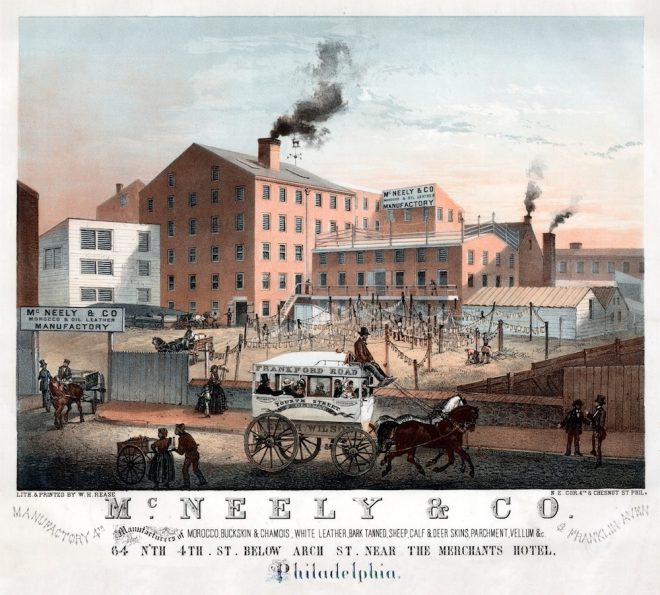 An omnibus features prominently in this 1860 lithograph by William H. Rease of G. H. McNeely & Company Tannery at 64th North 4th Street | Image courtesy of the Library Company of Philadelphia

Boxall’s bus also featured early transit advertising. A sign painter had brushed, in gilt letters on the tail end of the carriage, the mysterious words, “Fairmount Observatory.” This was a reference to the American Philosophical Society’s proposal to construct an astronomical observatory on the hill at Fairmount, now the site of the Philadelphia Museum of Art. The observatory was never built and reservoirs for the Fairmount Waterworks were placed there by 1839.

Boxall’s bus proved profitable and was the only functioning public transportation in Philadelphia for over two years. His service made a considerable contribution to the birth of commuting in Philadelphia, as omnibus riders were the first residents who regularly separated home from work by any appreciable distance. Most were business owners and salaried employees whose workplaces were located in the central business district in what is now Old City.

On July 1, 1833, Edward Deschamps established Philadelphia’s second horse-drawn omnibus line from the Navy Yard—then at Front and Prime Streets (Washington Avenue)—to Kensington by way of Second Street and Beach Street (an early version of Delaware Avenue). Deschamps charged passengers $.12. He operated on the hour and was the sole provider of transportation for Kensington and the shipyard of William Cramp for the next twenty years.

These early transit ventures led to the rapid expansion of similar omnibus lines into almost every part of Philadelphia, largely driven by public demand. Soon, omnibuses were rattling over the muddy streets of Philadelphia’s principal thoroughfares. Dirt roads made the carriages harder to pull and maneuver, thus incentivizing paving, either with Belgian blocks or bricks. Competition between the lines sent omnibuses careening through the streets, adding to traffic congestion and roadway chaos. Collisions with wagons and other vehicles occurred often. By 1857, there were some 322 individual omnibus lines in service in Philadelphia. 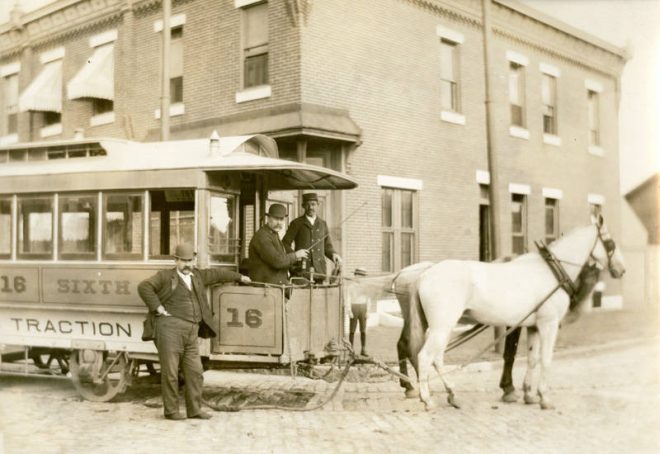 The fares of these lines were initially $.10 $.12, but were soon reduced to six cents and even to five, four and three cents when competition was keen or where the route was short. Some lines were supported by subscription, with each subscriber buying an annual ticket at a price which amounted to the reasonable fare of a penny a ride for those who rode four times a day. Many of the newer busses had seating on the roof.

For 23 years, before passenger rail, omnibuses were the only regular means of local travel in the city. The first horse-drawn tram, a precursor to the trolley, operated vehicles over permanent tracks was introduced in 1858 by the Philadelphia & Delaware River Railroad. At the start of the Civil War, there were roughly 150 miles of streetcar rails in Philadelphia. Horse-drawn streetcars operated in this city until 1897, with the advent of the electric trolley car, which became a more reliable and less expensive alternative. Beginning in the 1950s and 1960s, diesel-powered buses replaced most electric trolleys; later this year, with a SEPTA Key, you’ll be able to ride for $1.80.