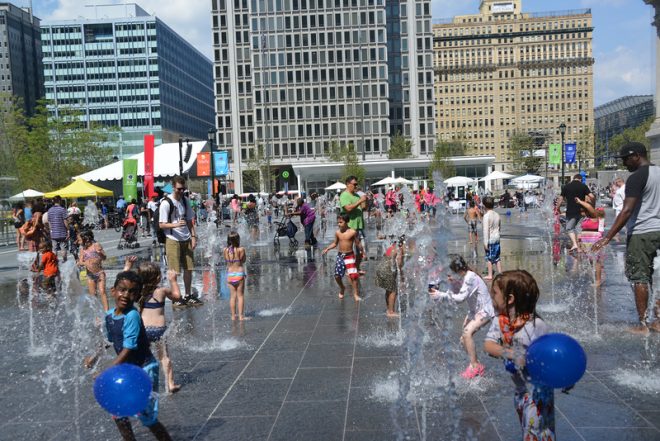 On a sunny afternoon in May a little girl lay on the ground looking up toward the sky. She giggled as she watched spurts of water jump in and out of her frame of view, simultaneously soaking her clothes. With water dripping from her brown pigtails, she looked at her mother sitting on a nearby bench and they exchanged mischievous smiles. She was one of several children–and a few adults–whose indulgence in the fountain at Dilworth Park contributes to the dynamic artistry of this reimagined public space.

Policies born out of Philadelphia’s City Hall overlooking Dilworth Park aren’t always attuned to the wishes of constituents, but the designers of the park have succeeded in creating a physical intimacy between the citizen and her government largely accomplished through engaging with water.

Designing Public Fountains for the Populace

While most of Philadelphia’s water system is underground and hidden from the public eye, water fountains throughout Center City serve to remind residents of the complex pipe system several feet below their feet. These fountains were installed, at various points in the city’s history, to celebrate Philadelphia’s place in the world. They are also symbols of how Philadelphia’s public life interfaces with, and influences, urban design.

The first fountains in the city were public faucets and horse troughs intended for water consumption, some of which can still be found in Old City and Society Hill. These served practical purposes and are characteristic of residential piping of the 18th century. Fountains in a more traditional sense, like the Swann Memorial Fountain inside Logan Circle, were designed as ornamental pieces to honor the city’s history and geography. These ornamental fountains were intended to be admired, to be viewed, but not to be used.

Today, modern fountains serve not merely as decorative accents to the city’s built environment, but as interactive structures. Philadelphians have always been known to go a step further than allowed. Rather than merely gazing upon these fountains as we past by, we often step in and take a dip. This was particularly true in the 1980s and 1990s when the City was struggling with financial hardship and parks and public recreational centers were largely neglected. Particularly during the hot, sweltering summer months, humidity coaxes Philadelphians to public fountains as respite from the oppressive weather. Public spaces become filled with an abundance of children playing and cooling off in decorative water reservoirs in front of municipal buildings and city buildings that feature regal bronze sculptures. While it might be illegal to swim in most fountains, this behavior largely goes unpunished as a result of tacit consent, a tolerating the public use of fountains for play that was not originally incorporated into its design. Tolerating this behavior further adds to a feeling of accessibility and freedom in the city’s public sphere. 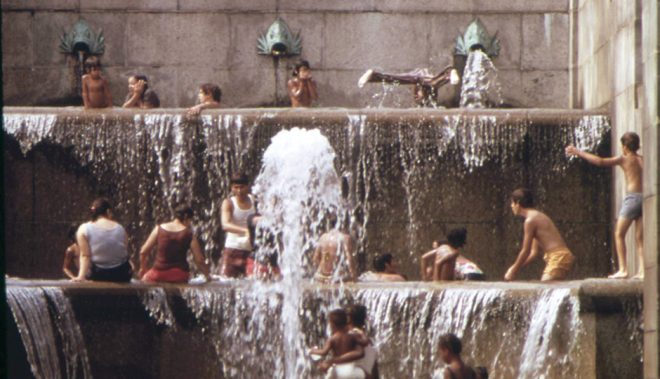 The Philadelphia Art Museum fountains overflowing with swimmers in August 1973 | Photo: Dick Swanson, from the National Archives and Records Administration

The programmable fountain at Dilworth Park is user-friendly and was designed with the intention of dynamic engagement, with the public participating in ways largely governed by their own whim and inspiration. This fountain is not just for passive viewing. The 185 x 60 foot grid of zero-depth water jets were designed with the expectation that children and adults will run through them like sprinklers. CMS Collaborative, the fountain’s designer, abandoned the common lipped pool model of most traditional fountains. Instead, it sits flush with the ground, inviting the public to walk through skyward streams of water as they please.

The Dilworth Fountain follows the evolution of public water art toward accessibility and interaction that began in the 1980s. However, such designs also reflect the ways in which human behavior–illegal or otherwise–has conversely influenced design. Dilworth Park’s fountain is an example of successful design because it imitates a human behavior that has already been in practice. This pre-existing aspect of the city’s public life is one reason the design is so successful. Playing in the jet streams at Dilworth Park fountain is intuitive for city residents who have been playing in fountains for decades. While this is a whimsical design, it lends itself to the ways in which depth of understanding of human behavior and preexisting aspects of public life are essential in designing infrastructural features that are useful and beneficial to those it will serve.

“From the earliest designs for Dilworth Park, dating to 2006, the idea was always a fully-accessible place that contained a major fountain element,” says Paul Levy, president and CEO of the Center City District. “This was a reaction to the unsuccessful plaza design of the 1970s that had left the park a derelict space that nearly everyone avoided. Second, the design firm, Olin, had designed fountains in parks in other cities that had been successful. Boston’s Post Office Square and Chicago’s Millennium Park also had attractive water features, so one could say that fountains were in the air as we were designing.” 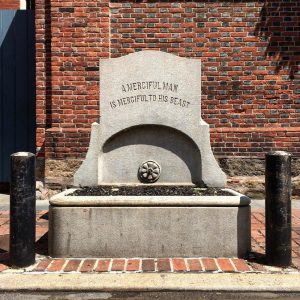 What is perhaps most interesting in the evolution of public infrastructure design in the context of Dilworth Park is the fountain’s intimate relationship with City Hall. The children and adults playing in the fountain express with their bodies a loving embrace of the city. Dilworth Park was designed to encourage this spontaneous form of civic love. “We set out from the beginning to create a space that would appeal to residents, workers, tourists and people of all ages,” says Levy. “Children never played in the old Dilworth Plaza. We deliberately wanted Dilworth Park to appeal to children and we’ve been delighted that it has become a water park for families with children from every neighborhood in the city.”

This phenomenon echoes the contributions of Jan Gehl, the renowned architect known for making cities more pedestrian friendly and promoting active public life. “We have done everything in city planning to prevent people from moving,” said Gehl during a keynote speech at Philadelphia’s Act Urban conference in June. Indeed, while a water system that provides safe drinking water for the urban population it services is essential to public health, new urban designs like the fountain at Dilworth Park also promote public health by encouraging dynamic physical activity and play. An active fountain is thus one element of a fight against chronic obesity.

The urbanist-minded designs of Schuylkill River Trail and the Spruce Street Harbor Park on the Delaware River have been instrumental in raising the value of public space in the city. In these cases, rather than bringing the water to the public, the infrastructure has been designed to bring the public to the water, with features that allow for the public to sit and walk over the water. Both are popular destinations used by people of all backgrounds, and this diversity of users is one indication of success. 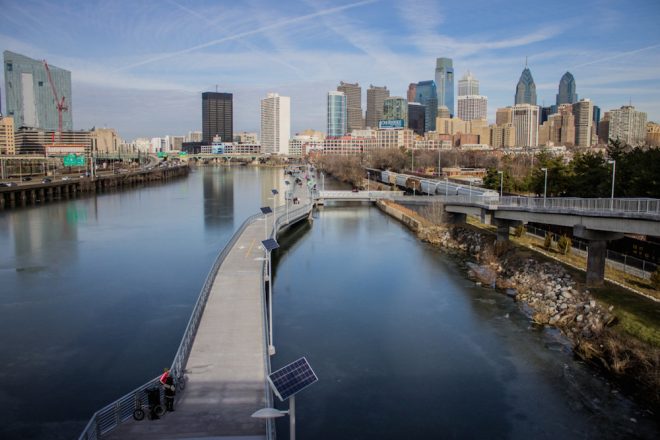 The Schuylkill Banks Boardwalk, a public amenity built on top of water, has been a tremendous success since opening in October 2014. The Schuylkill River Trail won USA Today’s “Best Urban Trail” award in 2015 | Photo: Michael Bixler

The city has more municipal swimming pools per capita than its peers as well as spray features in recreation centers. Many people live in close proximity to the Wissahickon and Pennypack creeks, which offer access to water in a more wild state (even if you never jump into the Devil’s Pool). But Philadelphia has yet to exploit the economic and community value of high quality water-based interactive installations in neighborhoods. Indeed, few neighborhood parks achieve the high level of public space design of Dilworth Park or other Center City public places.

My hope is that as Mayor Kenney and City Council determine how to invest sugary drink tax proceeds they will recognize the value in high quality urban design and not shortchange neighborhoods because they are poorer than downtown. Beautiful spaces attract us and water excites us in a visceral way. Water connects us to a primordial form of life that the city, with its rigidities, often seems to eradicate. Everyone deserves this connection.

But it would be a mistake to think that what is successful in Center City, with its cosmopolitan mix, can be replicated in neighborhoods, were populations are often more homogenous and needs quite particular. We don’t need Dilworth Plaza in Olney or Kingsessing; diverse neighborhood constituencies should have a real voice in directing the future of their public spaces. The public will benefit from the attention to detail that majority-led design teams may overlook given the roles that power and privilege serve in accessibility to the built environment. Empirical knowledge coupled with training in design and research ought to produce lasting public amenities that make Philadelphians feel great–about themselves and their city.