First Run: Camden’s Claim As Birthplace Of The Drive-in Theater 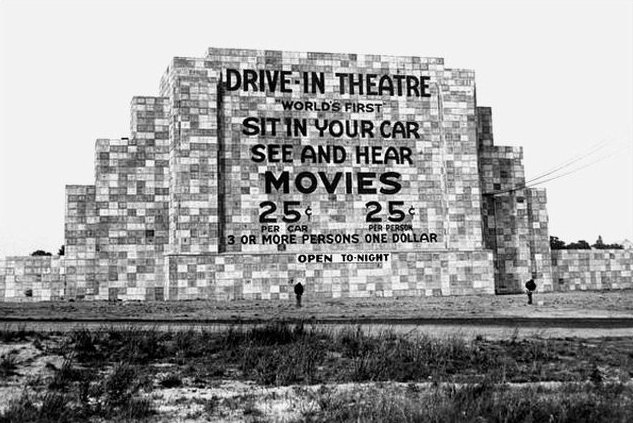 The world’s first official drive-in theater in Camden opened in 1933. The screen was 30 feet high and 40 feet wide | Photo: University of Michigan

The drive-in movie theater, a ubiquitous component of the Hollywood and auto-crazed culture of mid-century America, has largely faded from popularity and public consciousness. However, the Philadelphia region will forever have a permanent place in drive-in history as the concept was designed and patented here, just across the river in Camden, New Jersey.

It is fitting that an iconic representation of 20th century automotive culture began on one of the first roads specifically designed for the automobile, Admiral Wilson Boulevard, which opened in 1926. South Jersey native and chemical company magnate Richard Hollingshead, Jr. launched the world’s first drive-in movie theater on the north side of the Boulevard in June 1933. It is rumored the idea came from his mother, who complained the seats in regular movie theaters were less comfortable than those in her car.

Hollingshead, whose family owned and ran the R.M. Hollingshead Corporation chemical plant in Camden, created several blueprints for the drive-in and tested various components of the theater in his driveway. He first mounted a 1928 model Kodak projector to the hood of his car and simulated various weather conditions until the design worked. He then lined cars up in front of a tree-mounted screen to figure out the logistics of parking locations, angles, and elevations, and other considerations. He built a series of ramps he believed would afford all passengers a decent view, an idea which proved too costly and maintenance-heavy to implement. After several months of tests, he combined his blueprints for the various parts of the design and received a patent on his drive-in theater plan in 1930. 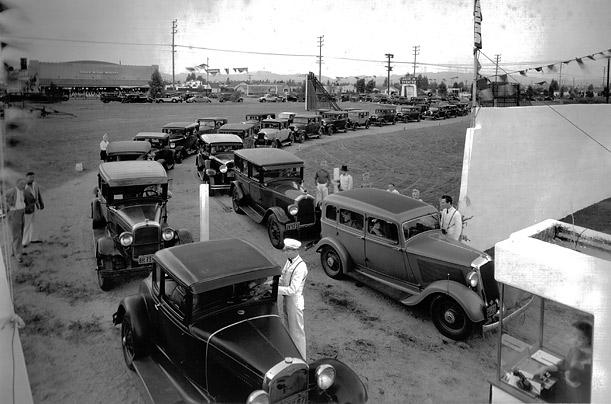 A traffic jam at the ticket booth on opening night, June 6, 1933 | Photo: Historical Society of Pennsylvania

Although the theater was an initial success, many patrons complained about the poor sound quality of the original speaker design. The theater featured three RCA Victor speakers, which were mounted to the screen. This created an issue both for people parked close to the screen, who were overwhelmed by the loud volume, and those in the back, who had difficulty hearing anything. Thus, there were few prime spots to park and have a decent movie going experience. Perhaps this is why early advertisements encouraged patrons to “talk or smoke” during the features. Hollingshead returned to the RCA Victor factory on Camden’s waterfront to look for a solution. The issue was resolved when RCA created a new small speaker that could be mounted to individual cars. 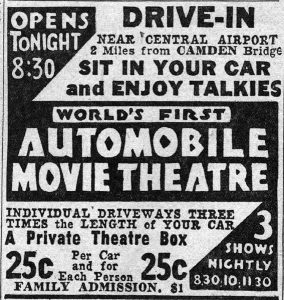 In the ensuing decade, drive-in movie theaters opened all over the country. Unfortunately for Hollingshead, most of these new theaters ignored his patent and he incurred large legal fees, but few royalties from their success. At the same time, Hollingshead’s own theater struggled to make a profit. As an independent theater owner during the Studio Era, he had to pay upwards of $400 for each film shown, and many of the pictures he was given had already been shown at traditional theaters before he was able to acquire them. The $.50 admission fee, even when bolstered by sales of snacks, soda, and beer, was not a sustainable model. Unable to make a profit, in 1935 Hollingshead sold to a theater owner who relocated the screen and equipment to Union, New Jersey. Although Camden’s drive-in days were short lived, Hollingshead’s theater was succeeded by myriad car-related businesses on the Boulevard, ranging from the amusingly ill-conceived whoopee coaster, in which customers would pay to drive their cars on a track which simulated a roller coaster, to the more mundane auto dealerships and gas stations. Today, a rental car lot occupies the space where Hollingshead’s theater stood.

For a time, the Philadelphia region was awash in drive-ins. Theaters in the city included the South Philadelphia, which was demolished to make way for Veteran’s Stadium, the Airport Drive-in on Essington Avenue, and the 61st Street Drive-In in Southwest Philly, which was a relative late comer when it opened in 1963. Just outside the city in Trevose, The Lincoln Drive-In, stood near the present day Neshaminy Inn. A little further north the Morrisville Drive-In operated through the 1980s, and the 202 Drive-In operated in West Chester into the early 1990s. The South Jersey drive-in market thrived post-Hollingshead in the ensuing decades, with theaters in Gloucester City, Pennsauken, Atco, and Palmyra. The Black Horse Pike Twin, in Camden, survived through the late 1970s. 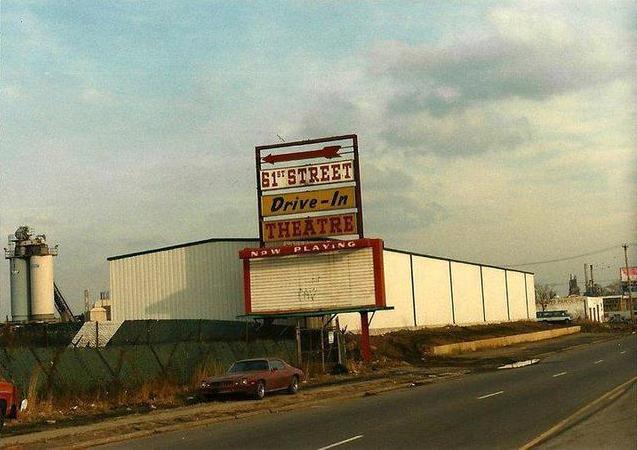 61st Street Drive-In was late to the party, but it still had a 20-year run. It opened in 1963 and closed in 1983. It has since been demolished | Photo: CinemaTreasures.org

The drive-in craze died off long ago, but the region still has two great theaters within an hour of the city. Shankweiler’s Drive-In Theatre near Allentown claims to be the oldest drive-in theater in operation in the country and is open during the spring and summer months. In Vineland, New Jersey, the Delsea Drive-In, which dates back to the 1940s, is open most of the year.