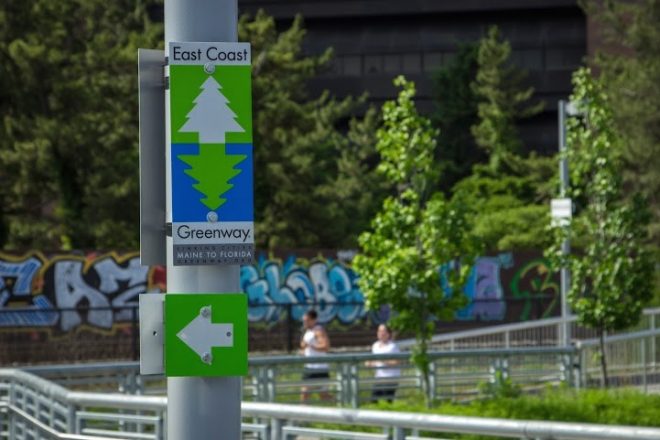 The East Coast Greenway aims to connect the entire city by foot and bicycle through a network of existing trails linking to one main artery | Photo: Tyler Horst

The East Coast Greenway Alliance celebrated two groundbreakings last week for sections of trails in Tinicum Township and at Lardner’s Point Park, in Tacony. The disparate trails will one day not only connect to each other, but also link Philadelphia to Maine in the north and Florida in the south. Along the way, funds for the trail network in Philadelphia, to be completed in 2025, will transform Spring Garden Street into a shared-use greenway and thoroughly widen Philadelphians’ access to both the Schuylkill and the Delaware Rivers.

“Philadelphia has been an absolute leader in development,” says Andrew Hamilton, the Mid-Atlantic trail coordinator for the East Coast Greenway Alliance.

According to Hamilton, thanks to the cooperation of the Philadelphia Streets Department and Department of Parks and Recreation, the City has been able to move relatively quickly in constructing new sections of trail that will not only complete the Greenway, but also link transportation and recreation corridors that citizens getting around the city can utilize.

“Within the next four years, there will be one continuous way along the waterfront generally” thanks to trails created for the East Coast Greenway, Hamilton explains.

The Greenway will include 67 miles in Pennsylvania, the trail entering Philadelphia through Bucks County along the Delaware River and eventually connecting to Spring Garden Street. From there, it will merge into the growing network of Schuylkill Banks parks, connecting key points like the Grays Ferry Swing Bridge to Bartram’s Mile. Funding in the amount of $3.265 million has been allocated to rehabilitate the old Philadelphia, Wilmington & Baltimore Railroad Bridge No. 1–built in 1902, abandoned in 1976–for pedestrian and biking use. Those funds came from $10 million in federal TIGER program transportation grants awarded to the Mayor’s Office of Transportation and Utilities in October 2015. Full conversion of the bridge is estimated to cost $14 million. Currently, construction is underway for an extension of the Schuylkill Banks Boardwalk and pathway underneath the South Street bridge. 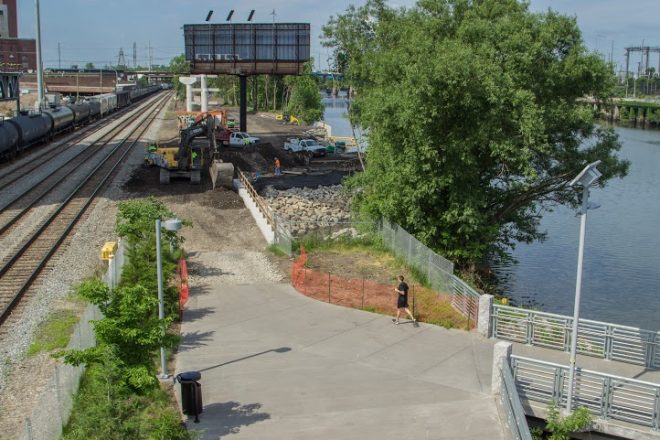 The southern expansion of the Schuylkill River Trail underway at the foot of the boardwalk | Photo: Tyler Horst

“We are trying to make a very connected city,” says Rob Armstrong, preservation and capital projects manager at Philadelphia Parks & Recreation (and an occasional contributor to the Hidden City Daily).

PPR is directly involved with the segments of the Greenway that will be on trails, which is the majority of the project, but Armstrong says moving the enterprise forward has only been possible with the cooperation of many organizations like the Delaware River Waterfront Commission, the Schuylkill River Development Corporation, and the Clean Air Council.

According to Armstrong, the Greenway will be the primary trunk trail to which smaller trails throughout the city can connect. Areas of the city that have been underserved and cut off from the trail system will be absorbed into the network as well. The Kensington and Tacony trail from Lardner’s Point Park, for instance, will allow someone to get from Juniata Park to Port Richmond, all without access to a car.

“I’m looking forward to the day relatively soon where I can get on my bike and ride from Darby Creek in Southwest Philadelphia to Poquessing Creek in the Northeast right by Bucks County and be off-road almost the entire time,” says Armstrong. “There’s no other big city in the United States that you can do that in.” 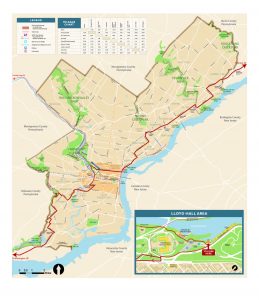 Spring Garden Street will be the only Philadelphia street getting a makeover from the Greenway.

“[The plan] involves the shared use path being in the median,” says Mike Carroll, acting commissioner of the Philadelphia Streets Department.

Carroll explains that while the Streets Department is still evaluating the best course of action, creating a bike lane in the median of Spring Garden—whether related to the Greenway or not—will benefit the city by providing another protected route for alternative users.

Hamilton projects 2025 to be the year that the East Coast Greenway sees completion in Philadelphia.

To get there, it will take extensive additional funding, which both Hamilton and Carroll agree is best done through grants. The Streets Department received a grant from the Pennsylvania Department of Conservation and Natural Resources for preliminary engineering work on Spring Garden Street, and the East Coast Greenway Alliance won a significant $23 million TIGER Grant in 2010. With grants totaling $16 million, the William Penn Foundation has also supported the project over the years.

For Hamilton, the Greenway in Philadelphia is not just a link in a chain, but a boost to the whole city. “This is creating transportation corridors that are also tourism corridors,” he says.

Armstrong agrees. “We want every area of the city to be able to access and enjoy this trail.”