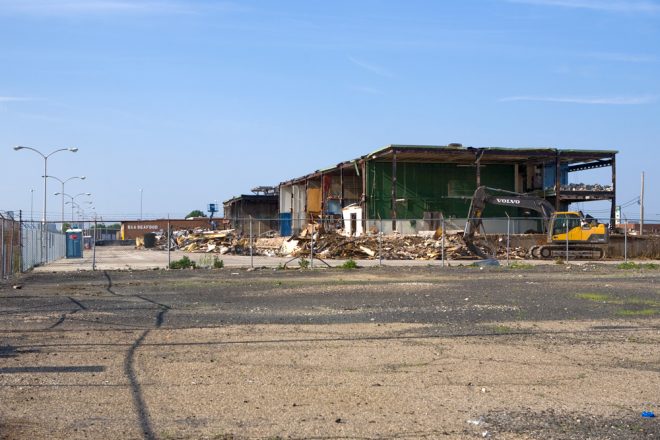 It may not look like much, but most of the seafood we eat once came through this demolition site | Photo: Bradley Maule

Editor’s Note: This guest column comes from David Mink, founder and operator of Sansom Street Oyster House, 1976–2000. In 2008, his son Sam took over for the subsequent operator, renovated and reopened the restaurant as simply Oyster House. Danya Henninger had a nice profile of the history of the place, including the affiliated Sam Adams brewpub, for Philly.com last year HERE.

While the city slept and the Philadelphia skyline was dark, the Philadelphia Wholesale Seafood Market was as bright as a sunny day. The market, just a couple blocks east of the Sports Complex in South Philadelphia, represented a distinctive window of time in the commercial seafood trade, a window that’s now closing with the demolition of the facility.

The wholesale market was seafood’s first stop on its way to distribution at your favorite restaurant or fish store. Before the city awoke, the market buzzed with tractor-trailers unloading, forklifts carrying pallets of fish, buyers walking the dock to make their selections. The Bluepoint Restaurant served shots and beer chasers at the bar in the rear to those coming off the night shift, coffee and doughnuts at the front counter to those starting the day. It was an active place.

Built on land leased from the city, the Wholesale Seafood Market and the Wholesale Produce Market opened in the 1950s on South Lawrence Street as top of the line, modern distribution centers. The new markets replaced the chaotic and obsolete markets on Dock Street that made way for the Society Hill Towers and other urban renewal projects. The market had 24 stalls, a common loading dock, and an ice maker to supply the entire seafood market. Developers from Les Halles, the Paris market, came to Philadelphia to learn about the new design. 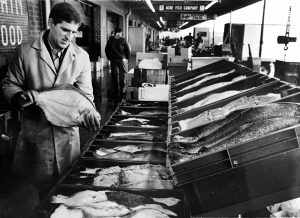 The market thrived in the ’60s—truly an open marketplace. A bell rang at 5:45am and the fish went on display. Another bell rang at 6:00 to begin transactions. Many vendors occupied a single stall. A few enterprising vendors took two or three stalls. Everyone had a special niche. Some dealers dealt only in fillets, some in flounder and cod, some in frozen shrimp and lobster tails, some in oysters and clams, some in whole fish. Most of the fresh products were trucked down daily from New England.

In the ’70s, the dynamics of the marketplace changed but the market did not. Large grocery chains started carrying fresh and frozen seafood. Little by little, the hucksters and small store operators went out of business. Different fish species came under pressure and quotas were implemented, disrupting routine product supply. Farmed fish became more abundant and the large grocery houses started buying direct from the producer, avoiding the Wholesale Seafood Market all together. Owners aged and the next generations got out of the business. Guys like Max Newman, Archie Segal, Jack Meltz, Morty Lieberman, Max Feingold—when they were gone, there was no one to replace them. Their stalls were absorbed by existing businesses while the volume of product moving through the market slowly declined.

In the late ’90s, the U.S. Department of Agriculture adopted Hazard Analysis and Critical Control Points standards for seafood to insure the safety of the products sold. Needless to say, this 40-year-old marketplace needed substantial investment to bring it up to code. The Wholesale Produce Market abandoned their open air market and built a fully enclosed and refrigerated facility in 2011 on Essington Avenue. The members of the Wholesale Seafood Market were too few and fragmented to build an altogether new market. 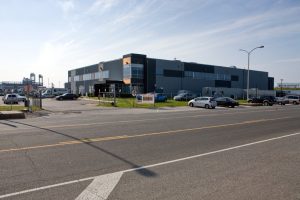 Sam D’Angelo, owner of Samuels and Son Seafood, left the market in 2009 to build a $20 million state-of-the-art facility across the street, the most modern fish and shellfish plant for processing and distributing in the city. Sam’s great-grandfather fished for his livelihood in Sicily, and his grandfather, Giuseppe Ippolito, sold fish from a pushcart until 1945, when he opened the store at 13th and Dickinson that still bares his name. Sam took over for his grandfather in 1974, and in 1989, he branched the business out into the commercial and wholesale market, opening a stall at the fish market on Lawrence Street. From the new facility, Samuels & Son operates by far the largest fish distribution network in Philadelphia, with over 400 employees and trucks delivering fish to New York and Washington, DC everyday.

The two remaining businesses, E. Frank Hopkins and B&A Seafood, have since relocated to existing buildings nearby. The common wholesale market is no longer critical for the distribution of fresh fish and shellfish in the Delaware Valley.

But the Philadelphia Wholesale Seafood Market was the last of its kind. The city has vacated any remaining leases, and a Volvo demolition excavator is taking down the shell of a building once populated by the city’s biggest and best fishmongers. The result will be several acres of continuous level land awaiting redevelopment. Hopefully whatever comes next will have the same staying power. 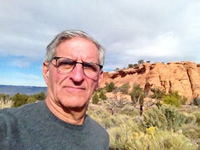