Hidden City and SPOKE Magazine have teamed up again to present a four tour series of bicycle explorations. Three of the tours are brand new (Camden was offered once last year) and we’re not sure when–or if–they’ll be coming back, so catch them while you can. 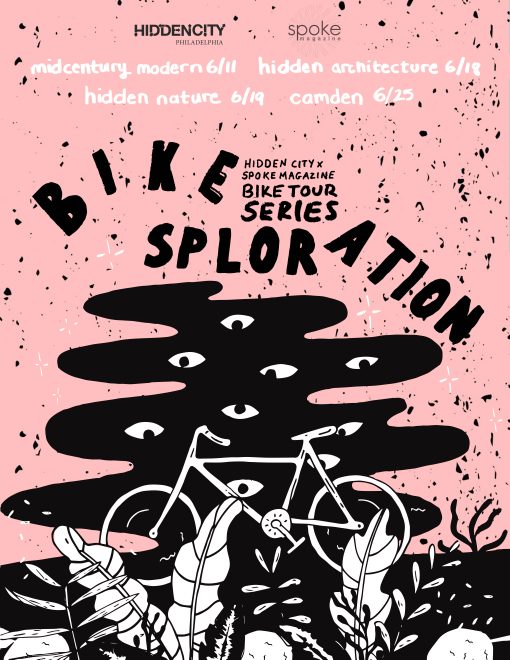 June 11–Shock of the New: Mid Century Philly Architecture
Does architecture have to be pretty to be appreciated? Are midcentury modern buildings really historic already? And what will we miss when they’re gone? From well-known landmarks to obscure oddities, you’ll learn to see Philadelphia modernism in a new light.

June 18–Hidden Architecture with Pete Woodall
How does Hidden City find all its stories? Learn to read the language of the city’s streetscape, and spot clues to a building’s past life lurking beneath decades of stucco, aluminum and neglect.

June 19--Hidden Nature with Billy Brown and Tony Croasdale
This North Philly nature ride will focus on the birds, beavers, amphibians and reptiles that call the Tacony Creek watershed home, along with habitat bordering the industrial Delaware River.

June 25–Camden: Beyond the Headlines
Join Camden resident and structural engineer Patrick Miner, for a wide-ranging bicycle tour that explores aspects of Camden that rarely get reported–its parks, buildings, neighborhoods and infrastructure.