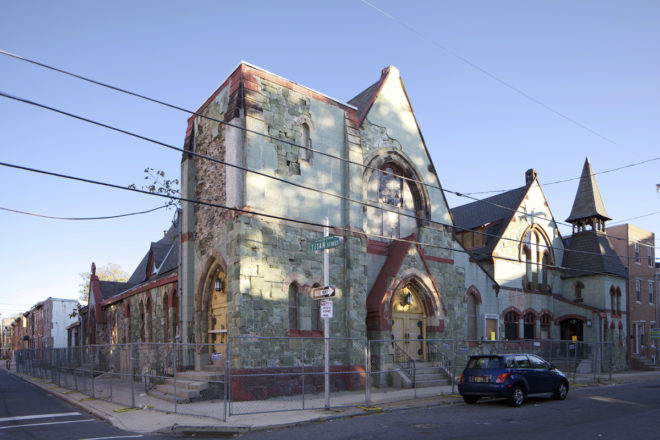 A gust of texts, email, and posts to UrbanPHL’s Facebook page blew through the preservation and planning community on Tuesday morning when photos of a demolition notice posted to the doors of 19th Street Baptist Church in Point Breeze by the Department of Licenses and Inspections began making their rounds. After hours of speculation and online expressions of grief and dismay, L&I officials confirmed that the notice was place on the church at 1249 South 19th Street by mistake and was instead intended for the auditorium addition of the closed Walter G. Smith School at 1300 South 19th Street nearly a block away.

The church, built for the congregation of the Memorial Church of the Holy Comforter in 1874, was designed by George W. Hewitt and serves as a rare example of a working class commission by the firm of Frank Furness. The building fills the southwest corner of 19th and Titan Street with mint green serpentine cladding, wine-colored trim, and distinctive Victorian flair.

Efforts to stabilize and raise funds for the church by the congregation and its pastor Reverend Wilbur Winborne, along with preservationists, a community of architectural volunteers, the advocacy group Partners For Sacred Places, and former mayor Reverend W. Wilson Goode have been arduous, but ongoing. The City cited the building with violations in 2011 after determining that the roof was compromised and the façade’s masonry work was beginning to collapse. The order given by L&I was to repair or be demolished. Grassroots emergency efforts, including sealing the roof over the course of a few weekends in 2013 for under $5,000, have gradually helped stabilize the structure. The perimeter of the church is currently secured by cyclone fencing and remains safe to the public, making the erroneously-posted demolition notice a surprise. 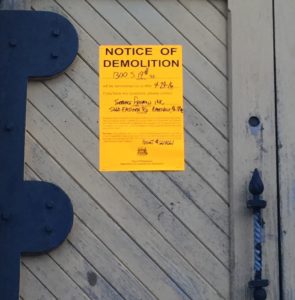 There will be blood. A fiery search for answers ignited after photos like this of the demolition notice on the doors of 19th Street Baptist Church began circulating on Monday night | Photo: Rachel Hilderbrandt

“My first reaction was, ‘Good Lord, here we go again.’ But it wasn’t panic,” said Aaron Wunsch, professor of Historic Preservation at the University of Pennsylvania’s School of Design, whose involvement with the congregation in stabilization efforts and advocacy has aided in the building’s persistent survival. “This church and congregation have gotten so much support and good publicity in recent years that I was confident we could fend off any new threats unless the building really was falling over.”

Wunsch and worried spectators following the news initially feared that the church had been classified as “imminently dangerous” by L&I, the proverbial demolition death sentence in many cases for historic structures with outstanding code violations in need of immediate rectification. According to Ashley Hahn, editor of PlanPhilly, the building is still listed in City records as “unsafe” and the violations from 2011 remain open after an inspector’s visit in February. Reverend Winborne told Hahn that L&I have filed no further actionable repairs other than those on record. Confusion and concern over the notice was allayed once officials at the Department confirmed the mistake later that day.

“I was very heartened by how many people perked up when the demo notice went up,” said Wunsch. “These are the alarm bells that should be ringing under such circumstances, and they did.”

Wunsch said he first received confirmation of the error from newly appointed L&I commissioner David Perri. During a meeting with a small group of church preservation advocates last week, Perri emphasized the importance of employing structural engineers who specialize in historic buildings to determine whether a structure deserves the “imminently dangerous” classification, one that brought down a number of neighborhood churches during the administration of Mayor Michael Nutter. Preservation advocates assert the imminently dangerous label is often hastily misapplied by inspectors. Wunsch said that Perri appeared sincerely committed to preservation issues at the meeting, which may signal a positive turn for a department currently struggling to sensitively address vulnerable historic structures.

A strategy for fundraising and masonry restoration still hangs in the balance for 19th Street Baptist Church, but, at present, time and attention is still on its side. “Every alarm system needs testing once in a while,” said Wunsch. “I’m glad this was only a test.”

An attempt to reach L&I commissioner David Perri for comment was not returned by the time of this story’s publication.