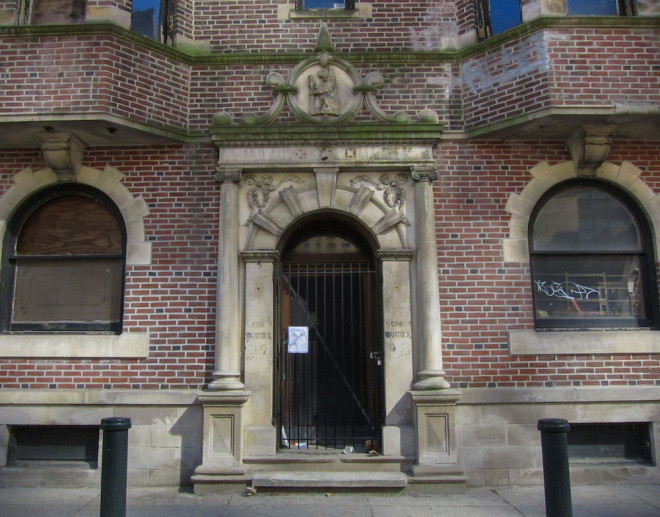 A demolition application notice with “postponed” stamped on it hangs on the front door of the Warwick Apartments at 1906 Sansom Street. Owners and Nashville-based real estate firm Southern Land Company filed an economic hardship application with the Philadelphia Historical Commission less than nine months after purchasing the building along with the Rittenhouse Coffee Shop and Baird Funeral Home | Photo: Michael Bixler

The Warwick apartment house on the 1900 block of Sansom Street sits wasting away under lock and key while quietly awaiting the inevitable. Like so many properties under threat of demolition, the building’s interior has been allowed to deteriorate through lack of upkeep and owner neglect. The historic apartment house was built in 1901 with designs by architect Chester Hughes Kirk. It primarily appealed to students, bohemians, and artists. About a century later, in 1995, the Philadelphia Historical Commission created the Rittenhouse-Fitler Historic District; the Warwick, and the Rittenhouse Coffee Shop adjacent, were given protection from demolition or major alteration. But the building’s interior behind its medieval motif and grizzly bear-crested façade spends its days mouldering in squandered potential, while a contentious preservation battle over the building brews in the background.

The current owner of the Warwick is the Southern Land Company, which purchased the Warwick Apartment House–along with the adjoining historic Rittenhouse Coffee Shop, the Baird Funeral Home, and the L-shaped empty lot at 1907-1914 Walnut Street–for $40 million in February 2015. Following the sale, the Nashville-based real estate company announced with that it was fully committed to working with the Philadelphia Historical Commission and the preservation community to faithfully restore the three properties at 1906-1920 Sansom Street, prepared to incorporate them into a development package that included a new residential tower and ground floor retail space that will fill the Walnut Street parcel, and a surface parking lot on Sansom Street. The firm’s enthusiastic tune hit a flat note in November 2015 when it filed a hefty financial hardship application with the Historical Commission for approval to demolish all three buildings, citing prohibitive environmental and reuse feasibility reports that allege remediation and rehabilitation costs of over $25 million. Southern Land has since withdrawn the demolition application for the Rittenhouse Coffee Shop building, but is still seeking approval to raze the other two, including the Warwick. The hardship application was to go before the Historical Commission in late February, but was removed from the meeting’s agenda and has been postponed to a later, undetermined date.

The Warwick Apartment House speaks of a time when painters, musicians, writers, and intellectuals roamed the streets of Rittenhouse seeking inspiration and creative guidance. With this in mind, we propose the faithful restoration of the Warwick apartment house for a design-forward boutique hotel with extended stay options for burgeoning artists and creative professionals. The building’s proximity to dining, bars, Rittenhouse Square, the Barnes Foundation and the Philadelphia Museum of Art, not to mention the Mütter Museum and the Schuylkill River Trail, provides the sweetest distillation of Philly life Center City has to offer. Notably, this hotel sector is underdeveloped in Philadelphia in comparison to peer cities. 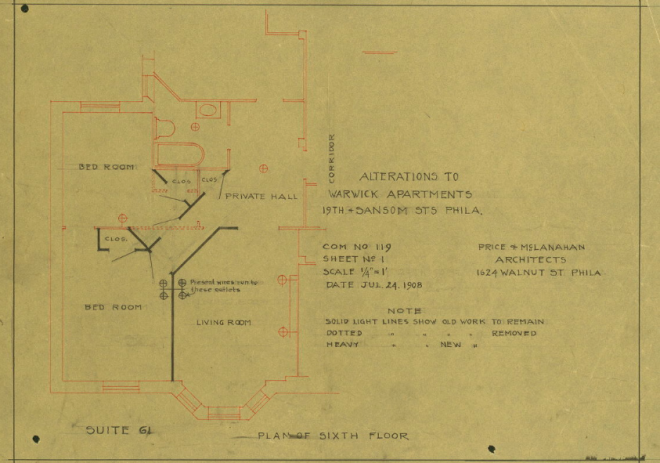 William L. Price and M. Hawley McLanahan of Price & McLanahan Architects drafted the original floor plans for the Warwick in 1901. The structure stands at seven stories and is currently the tallest building on southern side of the 1900 block of Sansom Street. Floors two through six still have the original bay windows with headers that contrast brilliantly against the red brick and undoubtedly bathes the condensed space in natural light. This type of fenestrations is becoming increasingly rare in Center City as commercial renovations to older buildings often obscure 2nd story windows to maximize retail space. As the electrical system would likely need to be updated, we recommend employing a daylight sensor system that would lower the building’s carbon footprint and energy costs.

The original design features multiple apartments on each floor. Each level features four apartments and the original drawings shows skylights on the top floor. In our proposed remodel we kept the plumbing layout as close to the original design in an effort to cut down budget costs and keep things simple, leaving four spacious hotel rooms per level. More rooms could be easily fitted into the floor plan in the future, however more plumbing would need to be added. 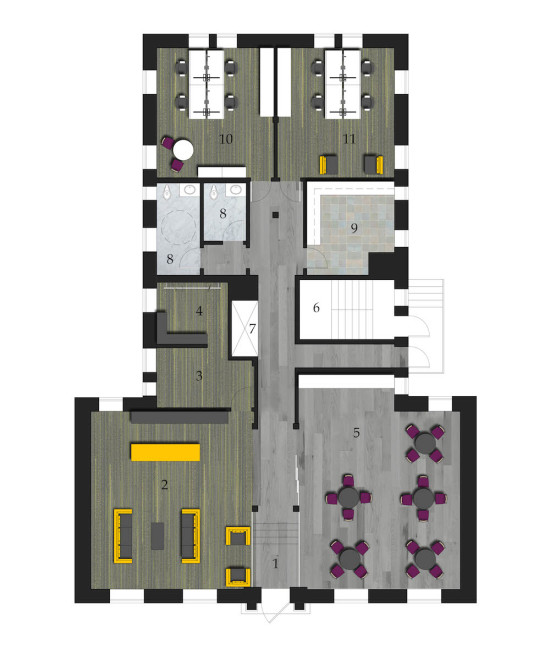 The main entryway is glass on both sides that allows copious light in the summer and a draft block for the cooler months. To the left is a reception area where guests will check in inside a small lounge closest to the windows. At the rear of the main desk is a door that leads into a luggage storage room for guests that arrive before their check-in time. Further back is a room with lockers and hanging storage for employees.

To the right of the main entry is a breakfast room with a street view that will serve a simple, but elegant continental breakfast sourced from the city’s many craft coffee roasters and pastry bakers. In the afternoon and evening the space will serve as a casual meeting area for guests and their colleagues or friends.

Continuing down the hall is an existing elevator to the left. To the right is an emergency exit hallway and a an emergency stairwell, both of which are in the original floor plans. Just past the emergency exits is a prep kitchen for light-fare and wine room service. Directly across the hall from the kitchen are two public restrooms.

At the south end of the building are two corner office spaces. The office space to the left is private and for employees of the hotel that manage booking, tours, and administrative operations. The office space to the right is a technology center open to guests with four small work stations and a printing and scanning station. Along with high speed internet service all four consoles will be loaded with word processing, graphic design and photo editing software for those on a working vacation. 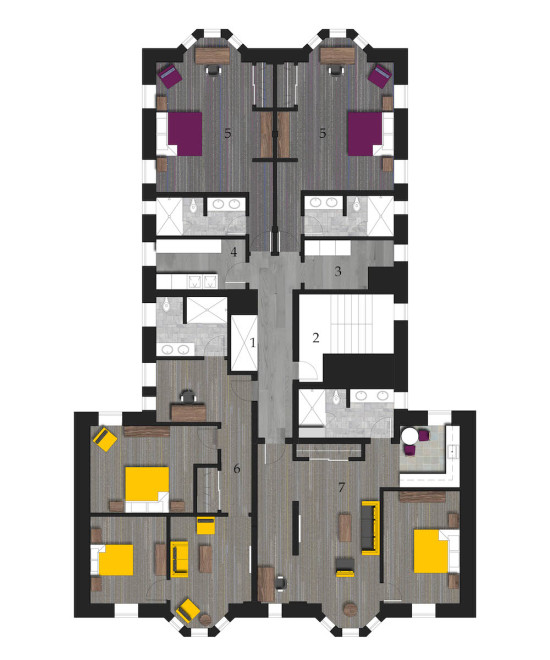 We designed the interiors of the second floor with the intent of the layout generally being the same for the remaining upper floors. The units at the front of the building have the most flexibility in being multi-guest or deluxe suites. Again, with windows on all four sides of this structure the natural light would be abundant and invigorating.

Upon exiting the elevator on a typical guest floor one will turn left down the hall to reach their room. To the right will be a large closet with vending machines and an ice machine. Across the hall will be a service laundry room for bed linens and cleaning supply storage.

Continuing straight down the hall are two single rooms. Each have a bathroom with a double vanity and standing shower. These spaces also act as a sound barrier for the cleaning and vending spaces that are adjacent. Rooms will feature a king-sized bed, two nightstands, a closet, a chaise lounge, and a desk facing the bay window to provide views of Sansom Street. In addition, a dresser and television will be on the wall opposite the bed.

At the north side of the building are the hotel’s more spacious rooms. Upon entering the northeast suite a desk with a shared bathroom will be to the right. Down a small hall will be one guest bedroom with a king-sized bed, two nightstands, a dresser and a chaise lounge.

A shared closet will be fitted into the hallway, which will lead to a small living room with a wall-mounted flat screen television. The space is highlighted by a front façade bay window that can be enjoyed by all guest staying in this suite. Through the living room is a second guest bedroom with a full-sized bed. 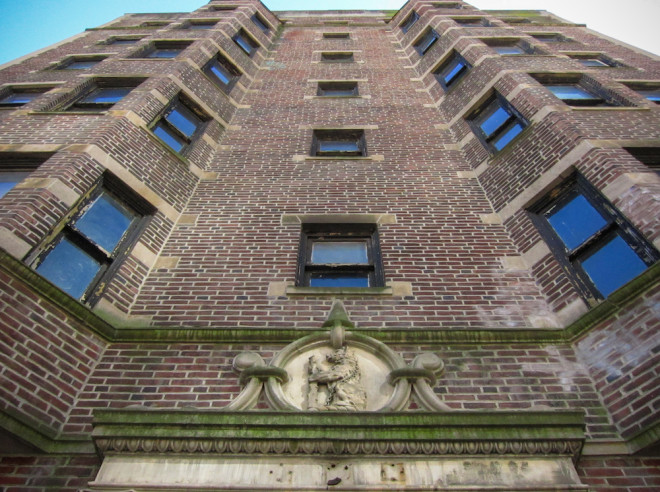 It’s a safe bet to assume that Warwick’s abundant bay windows gives the interior a very sunny disposition. The bear and ragged staff badge above the front entrance has long been associated with the Beauchamp family who first became the earls of Warwick, England in 1268 | Photo: Michael Bixler

Adjacent to the second guest room is the deluxe suite for guests that prefer a little more elbow room or those having an extended stay in Philadelphia. The more public spaces are closer to the entry–a sizable living room, closet, and desk occupy this space. Walking past the closet is the door into a bathroom to the left, which has a large shower for two and a built-in bench. Straight ahead is a kitchenette and small eating area. Through the living room and past the bay window is the master bedroom.

In reviewing the original floor plans by Price and McLanahan, this building has a lot of flexibility in regard to hotel room types and sizes. The Warwick’s abundance of windows drove much of our design as we felt it necessary to take advantage of the views and natural light. Regarding the facade, we would employ faithful historic preservation to all of the exterior detailing.

The Warwick apartment house contributes to the historic architecture and human narrative of both Rittenhouse-Fitler Residential Historic District and the city. By capturing the energy of the young, urbane traveler–the demographic attracted to similar hotels in London, New York, and Chicago, we propose to extend that story well into the 21st century. This is a building that is well worth putting to active use.