In Rittenhouse Square, A Parish Hall That’s Seen It All 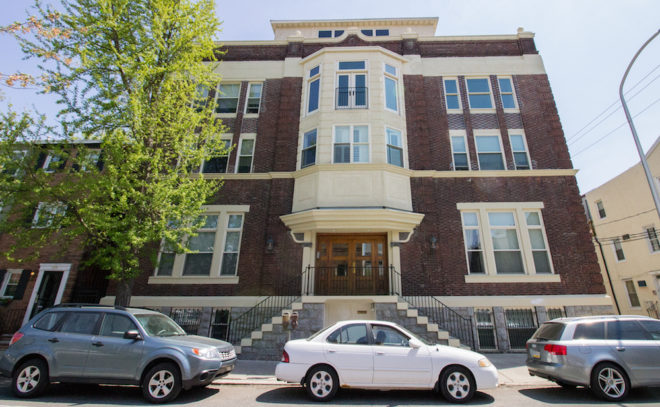 St. Patrick’s Church near Rittenhouse Square has been a staple Catholic institution in Philadelphia since its founding in 1839. Easily identified by its three beautiful buildings–the church, rectory, and schoolhouse–the church ensemble at 20th and Locust once included a fourth component, a parish hall at the northeast corner of 21st and Naudain Streets. The 113-year-old building, now being used for luxury condominiums, has worn many hats over the years, from makeshift hospital and Depression-era soup kitchen to a training school for the ministry of Father Divine.

St. Patrick’s built a new school building at the southwest corner of 20th and Locust in 1882. It became a very popular venue for a variety of events, not only for parishioners, but also the surrounding community. Enrollment at the school grew rapidly in the late 1800s and to meet the need, parish officials decided that the hall should be partitioned into classrooms. In order to make up for the loss, in 1902, the parish purchased a lot at the northeast corner of 20th and Naudain Streets for the construction of a modern parish hall. Fundraising began but the project was still short on financing a year later.

St. Patrick’s priest Father Keiran was given a private audience with Pope Leo XIII on April 17th, 1903 and was able to land a direct donation from the Pope for the final $1,000 needed to build the new parish hall.

By April 1904, the building was complete. The new facility, clad in tapestry brick, had an auditorium, gymnasium, dining rooms, club rooms, a billiard room, and a bowling alley. The building officially opened on April 16th, 1904 with a minstrel show by the church’s music group, the Patrician Cadets. Immediately after, all kinds of shows, suppers, dances, movie screenings, and annual events drew crowds inside the building.

Life was grand at the parish hall until October, 1918, when influenza swept into Philadelphia. The emergency–a pandemic that killed some 40 million people, with the highest urban death rate in Philadelphia–shut the city down. Businesses closed, schools went on hiatus, and all public gatherings were forbidden. The Catholic Archbishop Dennis Dougherty gave permission to parishes in the city to use their buildings as emergency hospitals. 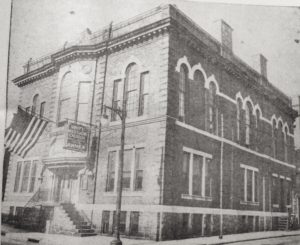 Saint Patrick’s parish hall was emptied and thoroughly cleaned the same night as Archbishop Dougherty’s directive came through. It reopened on the morning of October 11th as Emergency Hospital #8 with eight patients. News spread quickly that the hall was being used for this purpose and the place quickly became overwhelmed with 80 flu victims. Philadelphia police and the Dougherty Bedding Company both donated beds to accommodate all of the new patients. Doctors in the parish volunteered. The auditorium was used for women patients while the banquet halls were used for men and children. The billiards room and bowling alley in the basement became a morgue.

In the 18 days that the Emergency Hospital #8 operated at Saint Patrick’s hall, 154 patients were cared for. 34 died. One of the patients was a Stoneman, a follower of the Church of God, the short-lived anti-Catholic religious cult that grew out of a fraternal organization called the Stonemen’s Fellowship headquartered just a couple of blocks away. He was so impressed by the work of the church through the makeshift hospital that he gave up the Stonemen’s Fellowship.

After three difficult weeks caring for the ill, the parish hall went back to its normal operations until it was called to service again. During the early months of the Great Depression, in December 1930, St. Patrick’s Hall became a food bank, giving out meals to anyone who showed up hungry. The hall filled with hungry people and, just one month later, the church ran out of funds to pay for the food. A fundraising effort kept the food pantry at St. Patrick’s Hall open until July 1931. Over 100,000 meals were served.

By 1939, the 100th anniversary of the parish, St. Patrick’s was in dire straits. The priest had just died and all three of the church’s buildings were in bad repair. The new priest, Father Vallely, inherited the parish while it was $200,000 in debt. In order to save money, the centennial celebration was postponed for a year. Presumably to save even more money, the parish hall was sold to a hotel and restaurant worker’s union. The former parish hall in St. Patrick’s school building returned to use as the church’s parish hall and still serves that purpose today.

The union local only occupied the building for five years until selling it to Reverend Major Jealous Divine a.k.a. Father Divine. The Reverend had just moved his International Peace Mission movement from New York in order to avoid a lawsuit filed by one of his ex-followers. He was also reeling from the recent death of his first wife, Penninah.

The Home and Training School of the Unity Mission Church–one of three churches founded by Father Divine when his organization made the move to Philadelphia–was headquartered at 907 North 41st Street. The old parish hall at 511-17 South 21st would be used as the school’s annex. Both officially opened on December 27th, 1944. 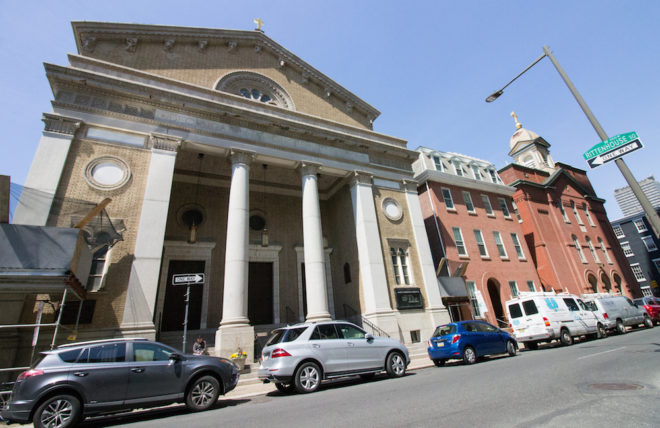 Divine’s churches all had Home and Training Schools, where followers would live, study, and work together. The old Saint Patrick’s hall had a chapel and offices on the first floor and a dormitory for eight sisters on the second. It was used for this purpose for the following five decades. After Divine’s death in 1965, the property came under the ownership of his second wife, Sweet Angel Divine.

In the 1980s, Divine’s church opened a thrift shop, the Peace Economy Shop, in the basement of the building.

On November 7th, 2003, the building was purchased by developer Harwin Homes for $830,000 with the intention of residential conversion into eight condominium units. Kise, Straw, & Kolodner, a local architectural consulting firm that specializes in historic preservation and planning, was hired to design the conversion. The developer added two stories and added parking spaces at the basement level.

The project, Mission Place Condominiums, was complete by September 2006.