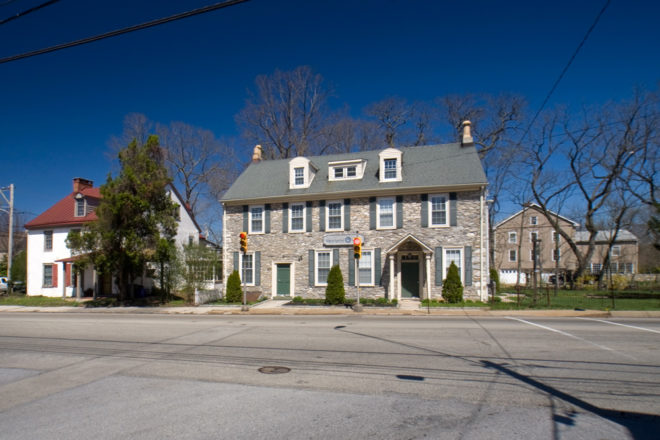 When Sydelle Zove first heard about redevelopment plans last fall for the historic Corson Estate at the intersection of Butler and Germantown Pike she almost leapt out of her seat in disbelief. The Plymouth Meeting resident, formerly of Germantown, lives a stone’s throw from two buildings as dense with history as the eight acre wooded parcel and farmland that stretches out behind them. Abolition Hall, a carriage house constructed in the late 19th century, served as a meeting house for anti-slavery advocates in Plymouth Meeting and was a key station on the Underground Railroad for escaped African Americans making their way north from Johnson House in Germantown. The Hovenden House, built in 1795, is the former home and studio of historical narrative painter Thomas Hovenden and his artist wife Helen Corson. The Corson’s entire 10 acre estate has been passed down to family members for generations and has remained largely undisturbed for centuries, until now. The three remaining heirs and joint owners of the land have entered into a tentative agreement of sale for the land with suburban subdivision developers K. Hovnanian Homes.

The New York Stock Exchange-listed company seeks a zoning variance to allow for filling the property with 48 new townhouses. According to the developer’s plan, the farmhouse, hall, and barn, all listed on the local and National Register of Historical Places, will remain intact as will the century-old general store. But the adjoining eight acres of open farmland will give way to a large subdivision that would compromise the historical integrity of the site, something Zove could not bear to witness without a fight.

For the past few months Zove and a group of roughly 21 concerned residents of Whitemarsh Township have been working diligently to raise awareness of the pending sale and of a zoning hearing on April 25 that could either seal or break the deal. The group has sent out letters detailing the builder’s plans and has consulted with attorneys and local lawmakers. They have taken out ads in local papers and have gone door to door to rally support. Plymouth Meeting was designated a local historic district by Plymouth and Whitemarsh Townships in 1961. The village of Plymouth Meeting was listed on the National Register of Historical Places in 1971. It includes 66 historically designated properties within the township, three of which are on the Corson property—the Federal-style 14-room Hovenden House, Abolition Hall, and a barn.

Zove is no stranger to community action. She was chair of the Penn Knox Neighbors Association when she lived in Germantown in the 1990s. There she led efforts to have the old Manheim Laundry on the 5300 block of Germantown Avenue decontaminated and cleaned of sitting toxic waste. She was also instrumental in shutting down the Colonial Inn, a personal care boarding home that was being used as a drug market and house of prostitution. Now a 20-year resident of Plymouth Meeting, she’s lending her efforts to ensure that public opposition has a voice as plans for the sale and the proposed development of the historic Corson Estate moves forward.

‘This is our moment to take a stand and send a message loud and clear to the zoning board that we care,” says Zove. “There is so much history here. Layer upon layer. The deeper you dig, the more you find.” 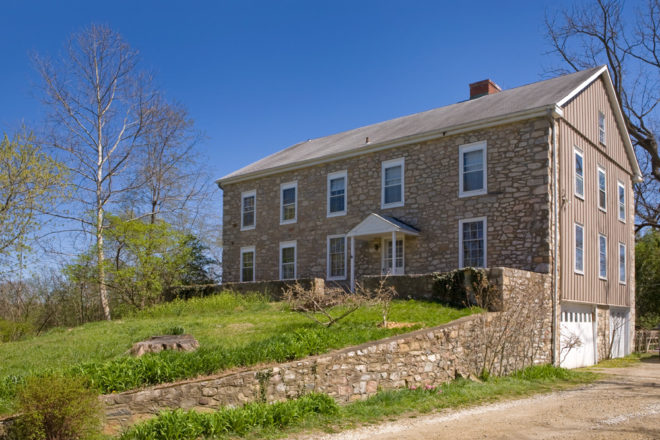 The Quakers of Plymouth Meeting were vigilant abolitionists, steadfast in providing safety for African Americans passing through Philadelphia and Montgomery County along the Underground Railroad en route to New York and Canada. In 1859, George Corson II, co-founder of the Plymouth Meeting Anti-Slavery Society, converted a barn on his farm into a 150-seat Abolition Hall to host lectures and meetings with key anti-slavery speakers like Lucretia Mott and William Lloyd Garrison just steps away from the Plymouth Friends Meetinghouse, the village’s 308-year-old namesake that still stands at Germantown and Butler Pikes. The Corsons were dedicated abolitionists well known for breaking the law and putting themselves at physical risk to aid runaway slaves. One story tells how George Corson II concealed a family under a pile of hay on his wagon for safe passage to the next station. Historians and scholars universally consider Abolition Hall to be one of the most important and well-documented stops on the Underground Railroad.

George Corson’s daughter Helen married Thomas Hovenden at the Plymouth Friends Meetinghouse on June 9, 1881. Hovenden, a celebrated Irish American artist and Pennsylvania Academy of the Fine Arts professor, was a narrative painter who used local tradesmen and African Americans as his subjects. One of his best-known works is the historical portrait, The Last Moments of John Brown, depicting abolitionist leader John Brown being led to the gallows after he was charged for treason for raiding a federal armory to arm enslaved African Americans. Hovenden embraced his in-laws’ Quaker faith and their abolitionist past inspired a number of his paintings. He converted Abolition Hall into studio space when he and Helen moved onto the property in the late 1800s and began focusing much of his work on interpreting dramatic moments in American history. He is regarded as one of the best painters of heroic scenes of the Civil War. Their daughter Martha M. Hovenden, a celebrated sculptor, would go on to use the building for her own personal studio.

Ann Wilson, one of the three Corson heirs, currently lives in the former hall with her husband, Roy. Both are artists and use a section of the building for studio space. The Wilsons have been quiet about the pending sale of the property.

Behind both buildings lies the eight acres of wooded bramble and open fields. Maple Acres Farm, the last operating farm in Plymouth Meeting, has leased the land for cultivation since the 1970s. Owner Gary McKeown’s family has been farming on their own 30 acre farm at 2656 Narcissa Road since 1916. 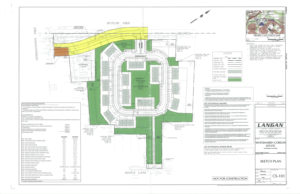 In order to move forward with the sale, K. Hovnanian Homes must be granted a variance on a longstanding provision of the township code that requires shared driveways and parking for new construction. Current plans for the development include garage fronts for each townhouse, priced to sell for $450,000, and additional parking for 48 cars along a loop that would circle the subdivision. If approved, the development firm will still have to satisfy conditional use approvals from sale, a price rumored to be appraised at more than $4 million, but the parking provision stands as the first big obstacle set before the builder.

Site plans have largely gone uncontested by the Historical Architecture Review Board and the township’s Planning Commission. Suggestions have been made, but no action or adjustments to the proposal have been required. Growing opposition could prompt K. Hovnanian Homes to respond to neighbor’s interests in an alternative plan that would lessen the density of the 220,000 square foot subdivision and create an appropriate buffer behind Abolition Hall and the barn. (nor to this reporter’s request for comment).

“The general sentiment of the citizens of Whitemarsh Township is development is inevitable, but we have to find a way to make it less dense and more conscious of existing traffic patterns and congestion,” says Zove. “The current plans are inappropriate. The township should exercise its rights to limit and shape development on this important historic site.”

Other issues surrounding the development include storm water management on a site prone to flooding, sitting water, and sinkholes. The proposal includes raising the grade on the construction site, which would send runoff rainwater flooding Marple Lane. K. Hovanaian Builders also intends to use a small dirt road for emergency access for fire trucks that would feed from Marple Lane, a private residential street. 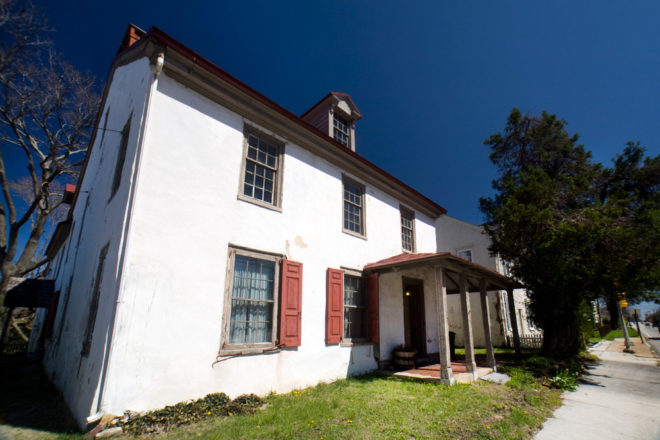 Then there is the possibility of requiring a realignment of Butler Pike to relieve traffic congestion turning onto Germantown Pike with a dogleg that would slice the land between Hovenden House and Abolition Hall, permanently severing the historic, physical connection of the two buildings. The realignment, which would cost between $1-2 million, has been discussed by township officials for years. But there is currently no money allocated for the project, which is not in Montgomery County’s long term plan. However, if the developer were to offer to pay a portion of the project’s costs, or if the realignment was made a condition of zoning approval by the township’s Zoning Board, it could become a reality. Zove says that the realignment would be disastrous for preserving the historic integrity of the three buildings and what would remain of the Corson Estate.

“This hearing is really pivotal. I hope the zoning board will have the backbone to interpret the code as it is written rather than issue a variance,” says Zove.

Requests for comments by representatives of K. Hovanaian Builders and the Whitemarsh Township Board of Supervisors were not returned by the time of this story’s publication.

Update: The public zoning hearing to review plans for the Corson Estate at 616 Germantown Pike in Lafayette Hill on April 25 at 7PM has been canceled per request of the applicant, K. Hovnanian Homes. No new date has been issued by the time of publication.