DNC 2016 The Latest For “Convention City”

This summer, Philadelphia will be consumed by a political heatwave as it welcomes the Democratic National Convention. By July 25—opening day—according to Rev. Leah Daughtry, CEO of the 2016 Democratic National Convention, speaking to the Inquirer, “we will have built a city within a city.” The effort will entail preparing for 50,000 guests, 15,000 hotel rooms, 400 buses, and 125 miles of fiberoptic cable. The Wells Fargo Center will become a hive of convention activity.

National presidential nominating conventions with political platforms did not evolve until the 1830s. Since that time, only Chicago has held more conventions than Philadelphia. Boston on the other hand has hosted only one national convention for any political party, the 2004 Democratic National Convention that nominated Democrat John Kerry.

Observers sometimes called Philadelphia the “Convention City” due to its role in creating the nation and the national government. The two Continental Congresses met in Philadelphia in the 1770s and ultimately voted for breaking away from Great Britain. The Constitutional Convention of 1787 then followed, the most acclaimed of Philadelphia’s political conventions. But Philadelphia has attracted political conventions of all sorts throughout history. Other groups have met in here with agendas ranging from the abolition of slavery and the advocacy of women’s suffrage to equal rights and gun ownership. 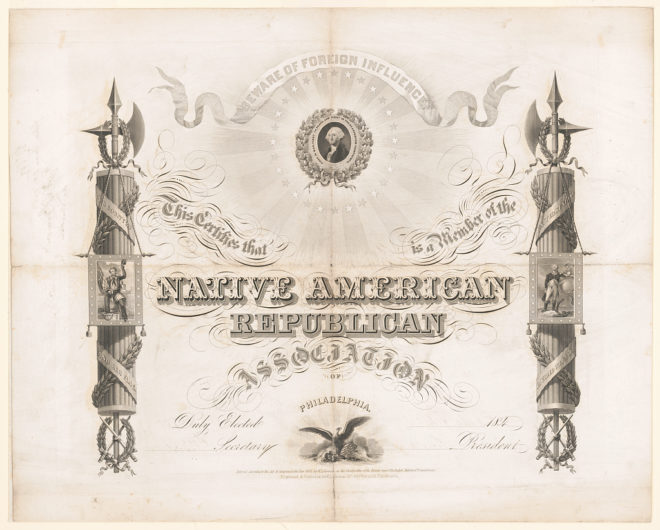 “Beware of Foreign Influence.” Membership certificate for a Philadelphia nativist organization in 1845 | Image: Prints and Photographs Division, Library of Congress

Philadelphia’s first national political convention was the 1845 meeting of the Native American Party, known as the Know-Nothings. With origins as a secret fraternal order, members of this xenophobic group had organized in New York only two years before. Their efforts were concentrated on electing only native-born Americans to office with a platform centered on a 25 year residence qualification for citizenship. When asked about their political faction, members professed to “know nothing.” The 1845 gathering in Philadelphia was their first convention. They formed into a national party during the meeting.

Growing rapidly, the Know-Nothings eventually allied themselves with Whig Party members who backed anti-slavery moderate Millard Fillmore. But trouble for the Know-Nothings began when they expanded into the South and assumed the name “American Party,” casting aside much of their secrecy. In mid-1855, Southerners seized control of the party at a meeting of the national council in Philadelphia and adopted a resolution calling for the maintenance of slavery, an issue that split apart the Know-Nothing movement just as it had the Whig Party, which had petered out by the 1850s.

Before the Whig Party died, it did manage to win two presidential elections, one of which was in 1848. That year, the Whigs held their national convention in Philadelphia, nominating for president someone who had never held an elected office before: Mexican-American War general and hero Zachary Taylor. The Whigs also nominated Millard Fillmore for Vice President. The convention lasted only one day in June. The Taylor-Fillmore ticket later won the 1848 presidential election.

Anti-slavery members of the Whig Party and the Know-Nothing movement subsequently joined the newly organized Republican Party. The “Grand Old Party” was founded in 1854 at a meeting in Ripon, Wisconsin. Abolitionists and those opposed to the expansion of slavery gathered to protest the Kansas-Nebraska Act, which opened territory to slavery that had been forbidden by the Missouri Compromise of 1820. The party was an umbrella that took in, in addition to former members of the disintegrating Whig and Know-Nothing parties, unaffiliated abolitionists, Free-Soilers, and anti-slavery Democrats.

In 1856, Philadelphia hosted two presidential conventions: the American Party (Know-Nothings), which on its last legs nominated Millard Fillmore, and the Republican Party, which nominated John C. Fremont. Ominous talk of pending civil war crept into national dialogue, especially in large cities like Philadelphia. There was a genuine feeling of national crisis when the GOP gathered at Musical Fund Hall at 806 Locust Street in mid-June. Around 600 delegates attended the Republican convention in 1856. They got right down to business the first day by adopting a platform, which had as its key plank the firm opposition to the expansion of slavery.

Four years later, at the GOP convention in Chicago, Lincoln emerged as his party’s choice for president.

Musical Fund Hall, where the first Republican National Convention took place, was converted into apartments in 1981. Designed by William Strickland and completed in 1824, this was one of the first concert halls in America and probably the best known music venues n the United States during the early 19th century. The late 20th century conversion necessitated the auditorium’s elimination, thus erasing the principle feature for which the hall had been deemed nationally significant. Its National Historic Landmark status was consequently withdrawn in 1989.

Rise and Fall of a Republican Stronghold 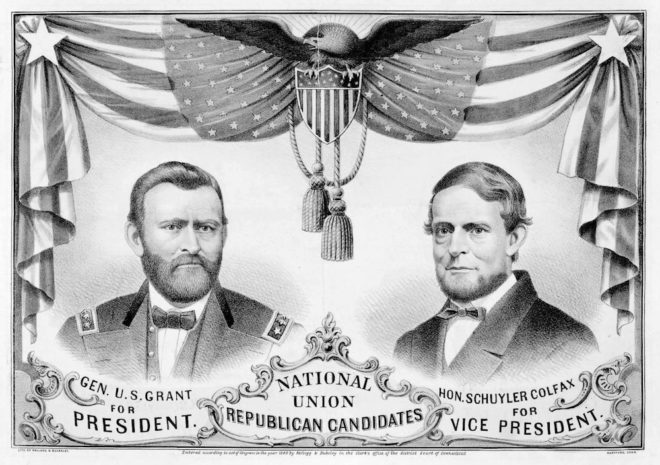 The GOP has held more conventions in Philadelphia than the Democratic Party. While most large American cities in the late 19th and early 20th centuries were ruled by Democrats, Republicans ruled Philadelphia from 1871 to 1952, almost without interruption. Only one Democrat and one independent were elected mayor during those years.

The GOP gathered at the Academy of Music on June 5, 1872, to nominate President Ulysses S. Grant for a second term. Since there was no question that Grant would be the unanimous choice of the delegates, the Philadelphia convention was mostly about pageantry and spectacle. Substantial African American representation from southern states occurred at this convention, officially dubbed the “National Union Republican Convention.”

The Republican National Convention of 1900 lacked suspense when it came to the GOP nominee, as it was widely understood that then president William McKinley would be nominated for a second term. Philadelphians had a warm spot for President McKinley, as he had visited the city often during his first term, usually to officiate at dedications and ceremonies. One such event was the Peace Jubilee, which was held in Philadelphia October 25-28, 1898 to celebrate the end of the Spanish-American War. Philadelphia produced a memorial to McKinley after his assassination less than a year later. Dedicated on June 6, 1908, the William McKinley Monument is located on the south side of City Hall.

An unknown going into the Republican National Convention of 1900 was the Vice Presidential candidate. After ample politicking in the Exposition Auditorium at the Philadelphia Civic Center, next to where Convention Hall–demolished in 2005–would later be constructed in West Philadelphia, Theodore Roosevelt emerged as the surprise choice. “Philadelphia has set a pace as a Convention City that will make all succeeding convention meeting places hustle to equal it,” said a delegate from Oklahoma.

In 1936, for the first time Democrats met at Convention Hall, where they renominated President Franklin D. Roosevelt. The 1936 Democratic Convention abolished the rule for nominating candidates by a two-thirds vote of the delegates in favor of a rule providing that a majority could nominate. This change would thus produce less balloting, allowing candidates to more easily be nominated. President Roosevelt and Vice President John N. Garner were renominated by acclamation without need for a roll call vote. “This generation of Americans has a rendezvous with destiny,” said FDR in his acceptance speech on June 27, 1936 at adjacent Franklin Field. 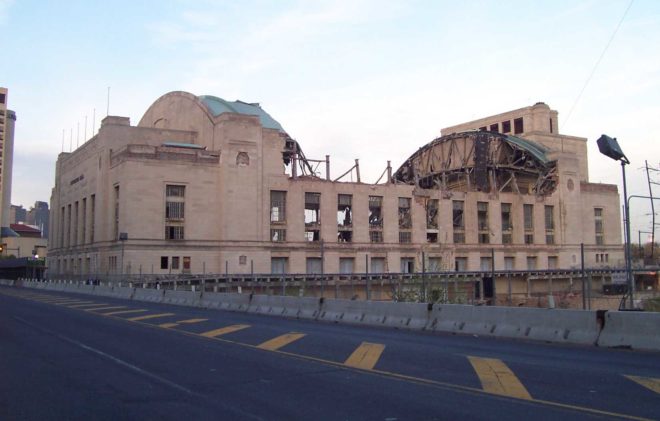 Convention Hall, host to political conventions, future presidents, the Beatles, and The Rolling Stones, among others, was demolished by the University of Pennsylvania in 2005. The Perelman Center for Advanced Medicine now occupies the space at 34th and Convention Avenue | Photo: Harry Kyriakodis.

Municipal Auditorium in Convention Hall was once regarded as one of the finest auditorium in the country. Built in 1931, the facility was on the edge of the campus of the University of Pennsylvania, and just to the southwest of Franklin Field. It could seat 13,500 people and provided 68 additional meeting rooms of varying sizes. In addition to hosting national political conventions in 1936, 1940 and 1948, Convention Hall was where the Beatles and the Rolling Stones debuted in Philadelphia. The cavernous space also welcomed the Beach Boys and most of the English Invasion pop groups during the mid-1960s. After having been the site of countless college commencement exercises (including that of this author), it was sadly demolished in 2005 to make way for the University of Pennsylvania Health System’s Perelman Center for Advanced Medicine.

The Republican nomination was wide open when the GOP met at Convention Hall in 1940. America looked at the world warily as the Nazis had overrun Poland and menaced England and France. The GOP front runners were Senator Arthur A. Vandenberg of Michigan, Senator Robert A. Taft of Ohio (son of the former president), and Manhattan district attorney Thomas E. Dewey. On the first ballot, Dewey was ahead, but steadily lost strength while Taft and Wendel Willkie, a dark horse candidate, picked up votes. On the fourth ballot Willkie was ahead, but short of the 501 votes needed for nomination.

“Not since the turbulent 1920 convention which finally led to the nomination of the ill-fated Harding had the Republicans staged such a fierce fight,” wrote a reporter for the Philadelphia Record. “Both candidates (Taft and Willkie) went into the sixth round fighting furiously. The floor of Convention Hall was the scene of hectic activity as the rival managers dashed back and forth fighting desperately for votes.” On the sixth roll call, Willkie finally went over the top. He would be crushed by Franklin Roosevelt in the November presidential election.

In 1940, the Philco Corporation’s Station W3XE (later WPTZ and now known as KYW-TV and Channel 3), the first affiliate of the NBC Television Network, televised the 1940 Republican National Convention–the first locally-televised national convention. The station broadcast some 62 hours of coverage, more or less the entire convention. There were fewer than 200 TV sets in the Philadelphia market in 1940, and most of those were owned by Philco and in the homes of its employees. Nevertheless, the convention was relayed over AT&T’s coaxial cable to New York City, where it was it was broadcast by RCA’s NBC station. General Electric also picked up the NBC signal on a huge antenna and retransmitted the program to upstate New York. 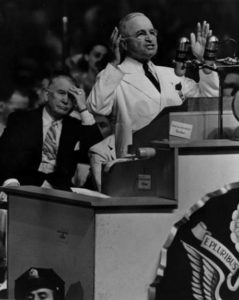 The first year of nationally televised political conventions was 1948, which included the first televised news conference featuring Thomas Dewey. This year Philadelphia hosted both party conventions. Democrats nominated Harry S. Truman and Republicans nominated Thomas Dewey. But the city also hosted the Progressive Party, which chose former Vice President Henry Wallace. Philadelphia became the only city in the U.S. to have ever hosted three political conventions in the same year.

Despite an attractive Republican ticket and polls showing Harry Truman well behind Dewey, the Democrat won the 1948 election big to the surprise of pollsters and pundits.

Philadelphia hosted the GOP convention in 2000, which nominated George W. Bush. The 2000 Republican National Convention was the first to be accompanied by the 24-hour presence of Internet news (though blogs really took hold in 2004). Never before had the press, delegates, and voters been provided with real time news, streaming media, and information with such speed and efficiency. This was, incidentally, Philadelphia’s first political convention in over 50 years.

As the Democratic National Convention makes its way yet again to Philadelphia, the city expects to earn some $300 million. The DNCC is working to give local businesses opportunities to become vendors and offer special promotions, and at least 35 percent of DNCC contracts will go to companies owned by women, veterans, and minorities.