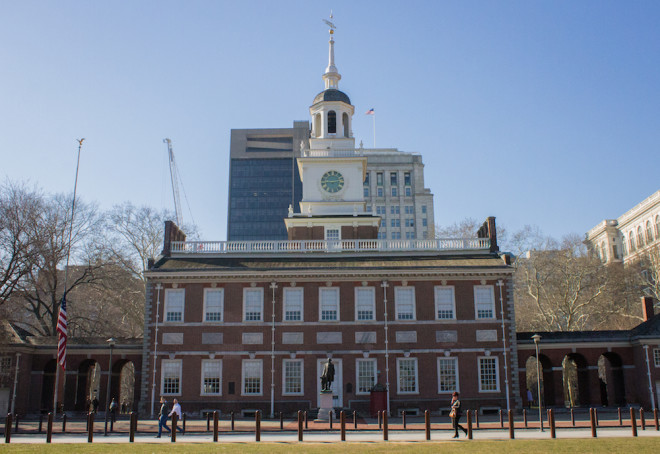 Independence Hall was designated by UNESCO as a World Heritage Site in 1979, one of only 25 in the United States, thus adding it to an international list of protected buildings. Philadelphia’s induction as a World Heritage City by the Organization of World Heritage Cities, not administered by the U.N., is misleading and does not include protection or any funding whatsoever for the city’s historical assets | Photo: Michael Bixler

It’s been nearly six months since Philadelphia became the first U.S. city inducted into the Organization of World Heritage Cities (OWHC), an announcement that generated a great deal of media attention, but much less public understanding of exactly what the apparently momentous occasion signified.

“I’ve been to three talks in the last three months where people involved with historic preservation have said, ‘We are now recognized by UNESCO.’ That’s where it’s going in terms of the misrepresentation and delusion around this,” said Bill Bolger, a historian for the Nation Park Service, which oversees Philadelphia’s UNESCO World Heritage site–Independence Hall. “It was advertised in a way that clearly made it seem like the city was on some world heritage list.”

But that’s not what actually happened.

Bolger said there was now a widespread misconception that the entire city of Philadelphia had become a UNESCO World Heritage Site. That unique distinction would have entailed support from the international community in protecting the city’s many historic assets.

In reality, Philadelphia became a member of a Quebec-based nonprofit that is not administered by the U.N., but instead represents about 250 cities that have UNESCO World Heritage sites. Founded in 1993 by a former mayor of Quebec City (the entire Vieux Québec neighborhood is a UNESCO site), the OWHC sometimes works with UNESCO, but is a separate organization.

The historian said city leaders spun the less prestigious membership in “a kind of support group for cities with UNESCO” sites as a much higher honor than it actually is.

“Getting publicity is a good thing, but I don’t think Philadelphia needs to make stuff up to get publicity,” Bolger said.

Since 1979, Philadelphia has been home to an actual UNESCO site, one of 23 in the U.S., that encompasses just a single building–Independence Hall–and that is as true today as it was before the November announcement. Bolger said he had explored expanding the UNESCO area in the past to encompass more of Old City (to be something like Vieux Québec), but found little local interest. Some smaller cities, such as Savannah, GA, have been stymied for decades seeking citywide designation.

Independence Hall’s World Heritage designation results in an added international layer of protection for the site, the birthplace of American democracy, but, because it is already safeguarded and maintained by the National Park Service, it receives no additional funding from UNESCO.

The only citywide UNESCO World Heritage designated city in the United States is the ancient town of Taos Pueblo, New Mexico. There, the U.N. provides funding for the restoration and maintenance of Taos’s historic earthen structures. 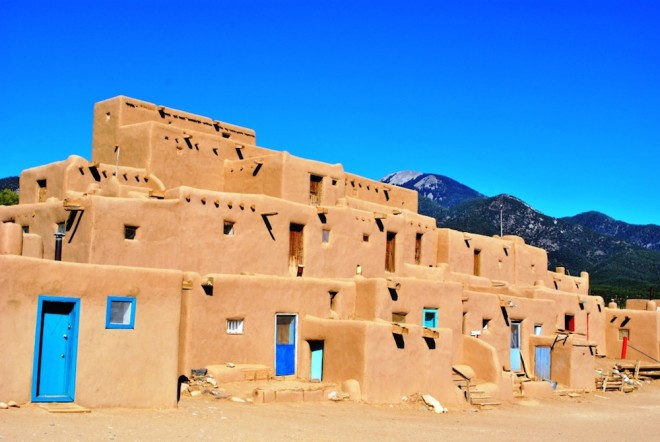 Taos Pueblo was listed as a World Heritage Site by UNESCO in 1992 and the only “city” with this designation in the United States. 95,000 acres of reservation land are attached to the pueblo with a population of 4,500. The adobe buildings have been continuously inhabited for over 1000 years | Photo: Elisa Rolle (Own work) – [CC BY-SA 3.0 via Wikimedia Commons]

Nevertheless, much early reporting appeared to confuse membership with the Quebecois nonprofit and the notion that the entire city was on the cusp of becoming a UNESCO site.

To be fair, the Global Philadelphia Association, the local group that spent several hundred thousand dollars and three years securing the OWHC membership, was clear about the distinction.

“UNESCO doesn’t actually designate World Heritage cities. They designate lots of things, at sites big and small. For example, the interior of the walled city of Dubrovnik, [Croatia] is a World Heritage Site,” said John F. Smith, III, a local lawyer and chair of Global Philadelphia. “So it’s kind of easy to confuse some of the UNESCO designations with the [OWHC] designations. But that’s not what UNESCO does.”

Some of the public confusion might be chalked up to the extraordinary economic figures attached to the new designation, which Global Philadelphia says is still momentous regardless of its relationship to the official UNESCO organization.

A study by the firm Econsult commissioned by Global Philadelphia (view it HERE) said OWHC membership could contribute to an increase in foreign visitation by as much as 10 to 15 percent, translating into upwards of 100,000 new tourists annually. That would mean around $150 to $300 million more of new tourist spending per year, according to the study.

University of North Carolina professor Brent Lane, who studies the effects of World Heritage designations, said that both official UNESCO designations and OWHC membership status were often preceded by rosy economic predictions. He found that inscription in either program rarely translated into dramatic benefits, but ironically, local boosterism promoting the international recognition efforts often made for a self-fulfilling prophecy.

“The amount of increase of tourism and economic impact is largely the result of marketing,” Lane said. “But the effect is a rather minor one that will be very difficult to discern from other macro effects.”

In a lot of ways, that’s exactly what’s already happened–major international publications regard Philadelphia, for better or worse, as even more historic than they did before November. And the local tourism industry was happy about the news. 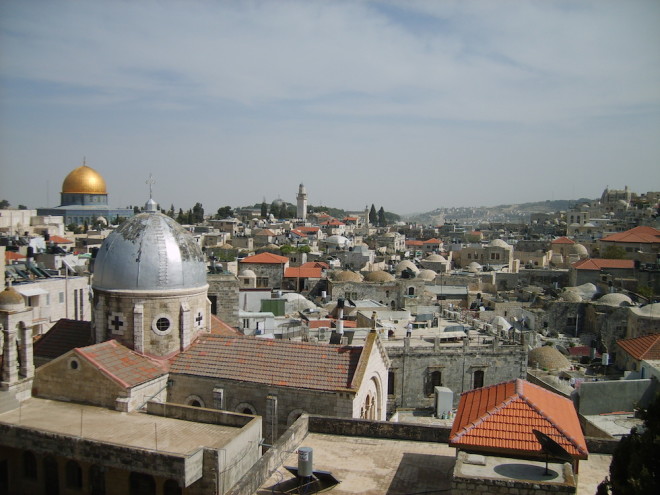 Old City of Jerusalem and its Walls was designated by UNESCO as a World Heritage District in 1981. The holy city for Judaism, Christianity and Islam contains 220 historic monuments including the armenian catholic church, Our Lady of the Spasm, in the foreground and the golden Dome of the Rock, built in the 7th century, as seen at left in the background | Photo: By Gugganij (Own work) – [CC BY-SA 3.0 via Wikimedia Commons]

“We think the designation is going to be pretty important in the context of a number of other things that have enabled Philadelphia to rise onto the world stage. It’s is another piece of that,” said George Stafford, president of the Greater Philadelphia Hotel Association, referring to the recent visit from Pope Francis. “I think the designation will generate more international visitation. We don’t know how much, but we think it will be significant.”

More marketing is exactly what Global Philadelphia says it intends to do, in order to capitalize on Philadelphia’s status.

“The marketing campaign is gearing up now,” said Scott. “We’re working with…a communications and engagement firm and have already started the branding effort. And a fair amount of work has gone into creating a more thorough marketing campaign that will take place over the next several years.”

No such thing as bad press, right? Much of the coverage of the announcement and the majority of Global Philadelphia’s report focused on these economic aspects. Yet, what about the city’s historic assets that form the basis for the OWHC membership? Can it spur preservation efforts?

“It absolutely has to start there,” said Scott. “This is a little bit a part of Philadelphia’s DNA anyway, we understand the terrible importance of looking after, monitoring, of preserving the historical and cultural assets that got us to this point. So, the designation is fundamentally important for strengthening the hand of people who want to make sure those assets are well taken care of.”

Scott said one of the steering committees for Global Philadelphia had been assigned to examine ways membership could protect historic sites in Philadelphia, and that he hoped that increased communication with the other 250 historic cities would yield benefits as well.

Lane said that if the OWHC designation spurred more historic advocates into action or led to the nomination more buildings for historic protection, that would go much further towards preservation than the membership itself.

But he wasn’t sure that those were the main reasons cities sought out these kinds of plaudits.

“It’s a civic pride, cherry-on-top for Philadelphia’s self-image,” he said.

But Bolger said he was concerned that the perception that Philadelphia had earned some sort of U.N. protection would contribute to a false sense of complacency around the dire need for more historic preservation efforts locally.


“The problem to me is that while all this was going down, people were talking about scuttling the Olympia,” he said, referring to a historic cruiser docked in Old City that was nearly mothballed due to lack of funds. “The [OWHC] membership is a denial of reality. I’d rather see Philadelphians ask serious questions about historic preservation needs in this city.”