The Shadow Peels Back The Layers At 13th And Race 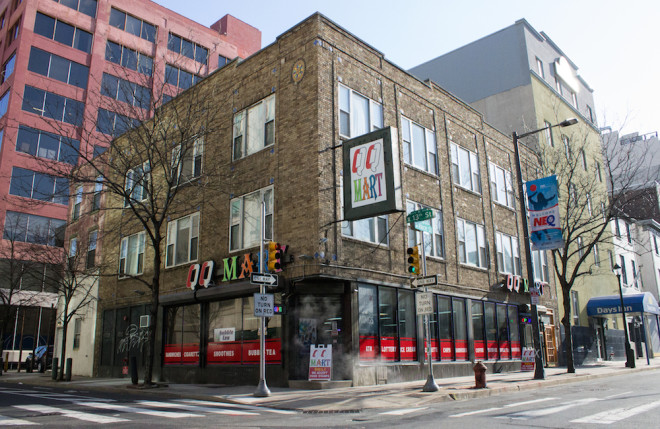 Built for business and then some. This old industrial building at 13th and Race has a history of reuse that will make your head spin | Photo: Michael Bixler

Smaller commercial buildings that survived the wrath of the Convention Center expansion in 2006 stand out like weary veterans of a battle lost. Most go unnoticed and ignored, and either hang in blight’s balance or have undergone so many exterior alterations that their architectural character has been nearly obliterated. On the northeast corner of 13th and Race, a three story industrial shop, originally built for the National Automobile Service Company of Pennsylvania, holds its ground with tawny brickwork, odd, exterior embellishments, and a lengthy list of reuse running 90 years long.

The Bricklayer’s Company of the City and County of Philadelphia, the second oldest masonry organization of its kind, was formed in 1790 with 24 members from the brick construction trade. The labor group met at Carpenter’s Hall near 4th and Chestnut for its first few decades and even organized a successful strike in 1827 to negotiate member workdays down to 10 hours. The organization still exists as the The International Union of Bricklayers and Allied Craftworkers Local #1.

In 1832, the Bricklayer’s Company acquired 1833 Sassafras Street–now the northeast corner of 13th and Race–from owner Peter Wager with plans to build a meeting hall for its growing membership. The new headquarters–two-and-one-half stories of light colored brick and set back from the lot line on all sides surrounded by a wrought iron fence–was completed in May 1833.

The Bricklayer’s Company used the hall for its bi-monthly meetings, allowing for other organizations to hold gatherings and religious services, which became the primary use of the hall in the 1840s and 1850s. 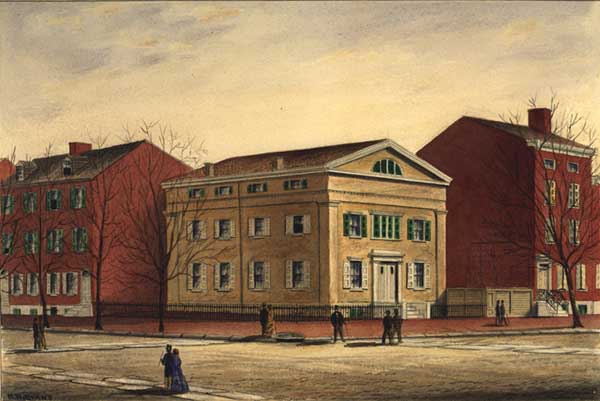 Painting of Bricklayer’s Hall, undated | Courtesy of the Library Company of Philadelphia

“Old Bricklayer’s Hall” was put up for auction in 1864 by Freeman’s Auction House, a firm still in operation today. The building was sold to Timothy Matlack Bryan who made it his residence and lived there until his death in 1870.

In 1872, the old hall started a five-decade run as an industrial space with Norris & Brother Plumbers and Gas Fitters the first to use the building in this way. The company built parts for locomotive engines used in trains made by several companies in the Northeastern United States including Baldwin Locomotive several blocks to the northwest at 400 North Broad Street.

A number of different industrial firms came and went after 1890. Manufacturers of auto accessories, electrical apparatuses, and Frey & Company stationary all leased space there. During this period the building took on so many additions and alterations it became unrecognizable. Great examples of this type of architectural mutation include the Old First Reformed United Church of Christ at 4th and Oriana in Old City and the Kensington Presbyterian Church, of which its industrial additions are now the site of Frankford Hall.

In 1925, the current building at the northeast corner of 13th and Race was built on the site of the old hall. However no record of its architect, builder, and client can be found. Its first occupant was the National Automobile Service Company of Pennsylvania, an early auto club similar to AAA that offered membership plans that covered vehicle repairs and maintenance. One might assume that the company strategically moved into 1231 Race Street due the building’s proximity to Automobile Row on nearby North Broad Street.

Commissioner Barfod never furnished the findings of his investigation, and NASCP ignored the warning. As a result, warrants were issued for the arrest of all 261 agents of the company’s Philadelphia office. NASCP sued and, the case, National Automobile Service Company v. Barfod, 289 Pa. 307 (Pa. 1927), went to the Pennsylvania Supreme Court in January 1927. In court it was determined that a government agency couldn’t shut a company down without due process, a decision that has been cited in innumerable cases ever since. Despite winning the dispute, the legal trouble drove NASPC out of Philadelphia.

A Revolving Door of Industrial Reuse

The Standard Piping and Fittings Company, another locomotive part manufacturer, moved into the building thereafter, until the company consolidated administrative operations with a plant at 49th Street and Grays Ferry Avenue.

At the end of the 1930s, 1231 Race became home to the Brodsky Decorating Company, a movie theater design and interior decoration firm that paired with architects to determine the interior designs of cinemas all around the Northeast. The company’s owner, David E. Brodsky, a native of Kharkov, Russia, was a champion of war bond drives. He received a Medal of Merit under President Franklin D. Roosevelt for outstanding service during the war and the 1947 Man of the Year Award from the Military Order of the Purple Heart for work with the Wynnefield-Overbrook Civilian Defense Zone during WWII. One of his first theater jobs was the long-gone Mastbaum Theater movie palace on Market Street. His firm decorated almost every major movie house in Philadelphia. He was commissioned for work in New Jersey, New York, Chicago, and Virginia as well. Brodsky was also known for his mural work in theaters, churches, and synagogues.

After a brief period as a printing plant, Samuel Tamarchio’s Windsor Electric Supply store filled the retail space of 13th and Race, offering television and radio repair services. Right after moving in a bus crashed into the corner of the building, doing severe damage to the ground floor façade. The repair shop had a huge, 75-foot tall aluminum antenna installed on top of the building in 1948. The building had other tenants during this period–notably Harry Schwartz’s dress manufacturer on the 3rd floor–but the property was most used by Windsor Electric Supply. 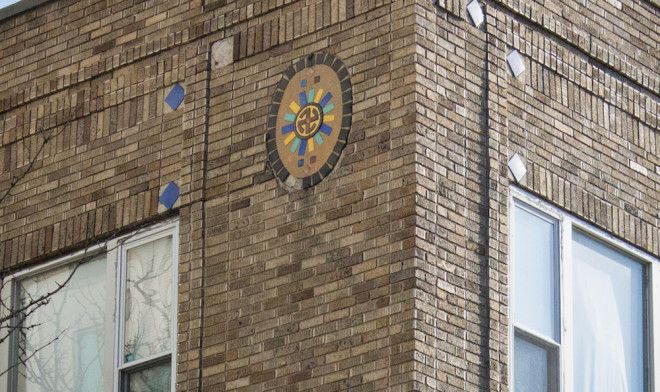 Don’t forget to look up? We’re going to assume that this tiled swastika was placed for good fortune with a nod to the ancient, sacred symbol for the sun moving through the sky and not for the other, more nefarious, connotation | Photo: Michael Bixler

In 1971, the Philadelphia Enameling Works, an old sign manufacturer that spent several decades at the southwest corner of 13th and Vine Streets, moved into the building. Presumably to make the move easier, the company sold much of its old stock lying around the basement of its old factory, including Jim Crow-era segregation signs they manufactured and distributed in the South in the early 20th century. A few examples of the company’s work from this reprehensible period can be found for sale at Stonegate Antiques in Glastonbury, Connecticut.

Apropos for a sign company to want a big sign, Philadelphia Enameling Works fought with the City over a large sign company officials wanted on the façade of the building, eventually two 36′ x 3′ sections installed on Race Street and 13th Street.

The sign company found itself in need of space and merged the building with its neighbor to the north at 205 N. 13th Street, bringing the combined properties to a total of 11,112 square feet. Two row houses at 207 and 209 North 13th Street were also demolished to make way for a surface parking lot. Philadelphia Enameling Works, along with Mid-Atlantic Graphics, stayed at 13th and Race Streets until 1985, when it moved to Upper Darby. The original Philadelphia Enameling Works building at 1309-11 Vine Street is currently occupied by a sign-making business.

Clifford Epstein purchased the property in 1981 from the Philadelphia Authority for Industrial Development for $269,500. Later that year, the Joan Kerr Dance Company leased the third floor, while the Center City showroom of Spike’s Trophies occupied the street level space. Spike’s is still in operation today at Suburban Station with corporate headquarters on Grant Avenue in the Northeast.

A One Way Ticket To Convenience

In 1996, Johanson and Gloria Setiawan acquired 1231-35 Race Street for $265,000 and opened Discovery World Travel & Supplies shortly thereafter. The business was both a travel agency and an import-export company. They also sold luggage. In 2001, the Setiawans added a coffee and pastry stand for customers and renamed the business Discovery World Cafe.

In 2003, current owners 13 & Race Associates Limited Partnership purchased 1231-35 Race Street for $750,000. The investors installed 12 residential units cleaned up the ground floor retail space under the designs of local architect Te-Chow Lei. After an attempt to fill the retail space with a healthcare provider and an athletic club failed, the space sat empty for years. In 2010, the property was listed for sale for $4.5 million, but was withdrawn a month later. Shortly thereafter, the retail space’s current occupant, QQ Mart convenience store, opened for business. The Philadelphia Enameling Works Race Street signs were removed and replaced by a smaller, more appropriately scaled sign for the convenience store. Oddly, despite being closed for decades, signs for Discovery World Travel still hung on the building until last year.