When John Bendel picked his camera back up after 30 years sitting on the shelf he knew exactly what he wanted to photograph. The 73-year-old urban explorer and father of two spent much of 1974 photographing abandoned properties along the Hudson River, but mostly gave it up when he had his first son, keeping his subject matter safely focused on family and friends. In 2009, Bendel, living in Island Heights, N.J., received a list of 20 or so abandoned sites around Philadelphia from urbex buff Radical Ed after a showing of Bendel’s work from the 1970s. The former Spring Garden School No.1 at 12th and Jessup Streets was on that list.

The school, designed by ubiquitous Philadelphia public school architect Irwin Catherine (Read our story on Catherine’s educational architecture HERE), was built in 1928, a Moderne style behemoth in its own right. The school closed in September 1982 and operations were moved to the orange-brick Art Deco polypheme at 1146 Melon Street–another fine example of Catherine’s subtle versatility. The building was placed on the National Register of Historic Places in 1986. Temple University’s Pan-African Studies Community Education Program briefly used Spring Garden School No.1 then, within a few years, moved the program elsewhere. The building has sat vacant, decaying, and a hot spot for explorers and graffiti artists ever since. The Philadelphia Housing Authority currently owns the building.

Bendel first began photographing classrooms inside Spring Garden School in 2009. When he returned in 2011 he was taken aback by how some of the rooms had changed, a sort of visual metamorphosis brought on by time, deterioration, vandalism, and graffiti. Bendel began pairing photos he had taken of the rooms and immediately took note of how the ruins of the old school began to resemble something akin to a time-lapse art installation, a seed that germinated the theme of his photo series, 4 Years/40 Walls.

I caught up with Bendel to discuss the project in detail and explore the notion of abandoned sites as mutable, architectural ecosystems.

Michael Bixler: How did you get started on 4 Years/40 Walls, and what attracted you to Spring Garden School?

John Bendel: I checked out Spring Garden School in October of 2009 and went back in July of 2011 when I was struck by the extent of paint on the walls and blackboards. I cataloged as much as I could, and more or less forgot about it, though I did return to the building a couple of times.

Going through a fresh set of Spring Garden shots, I recalled the 2011 pictures and began to pair up images. The effort sent me back to the school for some reshooting. 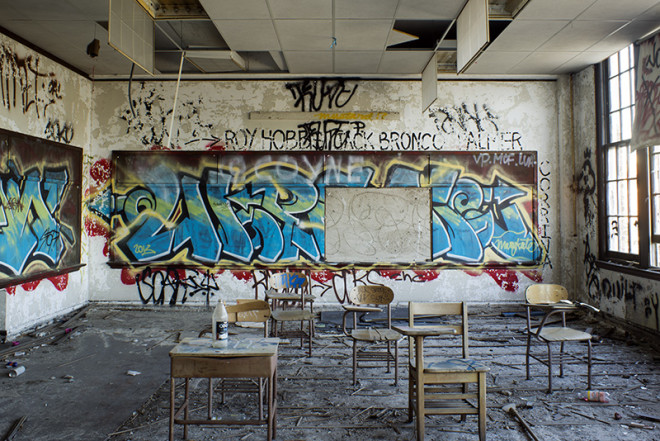 School’s out forever. In this photograph from 2015 more graffiti emerges, a wall panel disappears, the ceiling drops, and desks appear where there weren’t any four years ago | Photo: John Bendel

MB: The most apparent changes in your photographs between visits is the mutable canvas of graffiti and the literal drop of dropped ceiling panels. Can you share some of your observations on the state of the building four years later and the effect of time and decay to rooms you record?

JB: In 2009 there was little graffiti, but plenty of vandalism. The place had been plundered by scrappers. They completely trashed the bathrooms to get at copper. Empties, broken glass, and pointless destruction attested to wanton, probably youthful demolition parties. I doubt many of the partiers were from the neighborhood. I know young explorers nostalgic for the fun times they had there. I can’t be sure, but I expect the more recent hanging ceiling panels were left by scrappers. With the lucrative stuff long gone, they might have been removing lighting materials, probably fluorescent ballasts.

The most dramatic change, of course, was the second floor fire that resulted in charred walls, melted ceiling tiles, and windows smashed out frames and all. There are those hanging ceiling panels, but most of the visible changes inside Spring Garden School have been about paint–what I came for.

MB: The series illustrates a kind of architectural paradox of graffiti giving new life to ruins. The reanimation of abandoned spaces through vandalism and paint. Graffiti Pier in Port Richmond is a great example of this phenomena. Some walls, while in much worse shape four years later, almost leap out of the photograph with life. Can you share your thoughts and observations witnessing this in Spring Garden School?

JB: For the past few years, paint is what I’ve pursued. I say paint instead of graffiti because I don’t want to simply record the works of other artists. What I look for is graffiti on graffiti, works painted over, defacement defaced, colorful cacophony–in situ. There is actually a bit less of that at Spring Garden than there is at, say, the coal pier and some other places. Still, I think of the pictures as civilization and its opposite, architecture–walls, windows, doors–and vandalism. At its best, in my view, this kind of found work is compelling–colorful, whimsical, violent, accidental, malevolent, ironic. 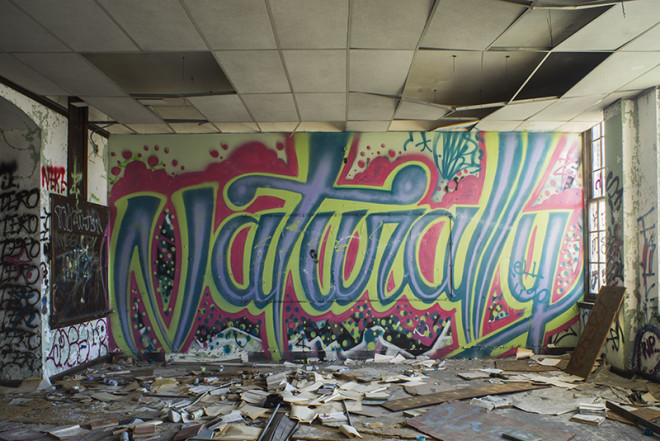 MB: Are you fond of certain walls over others?

JB: Looking at six years of pictures, you can clearly see that Spring Garden School in its entirety is an unintended installation, an evolving transitory work, in parts and by turns repulsive or appealing, but always fascinating. Yes, I prefer some walls to others. Of course, some are just ugly. A bit challenging to cite specifics here though.

I love Spring Garden School. Like most trashed buildings it feels like the day after a battle–surreally calm and menacing at the same time. Places in this condition (besides being physically dangerous) are ephemeral, especially in a rapidly reviving city like Philadelphia, which is making a serious effort to keep people out of Spring Garden School. I suspect I’ve already seen the inside for the last time.