Learning From The Piazza At Broad & Washington 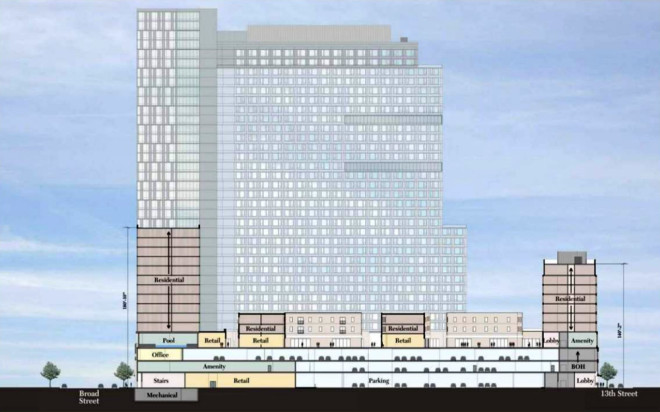 In recent South Philadelphia community meetings, Tower Investments developer Bart Blatstein has faced tense, often shouting crowds of neighbors opposed to his megaproject at the northeast corner of Broad Street and Washington Avenue. In response to the criticism, Blatstein has consistently pointed to his successful work in Northern Liberties as proof that residents should trust his ability to create vibrant urban space. His latest plans include an elevated “village”—originally a resident rooftop space, now planned to be a public amenity four floors up, connected to the street via escalators and elevators.

Hawthorne neighbors concerned about the viability of this elevated public space have called for a development more like the Piazza at Schmidt’s, the centerpiece of Blatstein’s Northern Liberties work. But is the Piazza really evidence of “Good Bart”? Though it was hailed as an innovative, community-oriented success when it opened seven years ago, today the Piazza’s public space is chronically underused, leaving visitors feeling more like lone trespassers than participants in a vibrant community. (It’s worth noting that the property was sold in 2013 to New York-based Kushner Companies, owned by Donald Trump’s son-in-law Jared Kushner.) 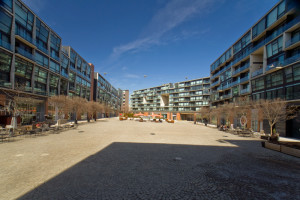 The Piazza, 75º and sunny at 3PM two weeks ago | Photo: Bradley Maule

Though Blatstein based his entire Piazza development around the promise of urban vibrancy, return on investment ultimately won out over the communal vision for the space. As the development and neighborhood became more established, it seemed Blatstein found integrating the original community too challenging and expensive. Attempts to reach him to discuss the Piazza and the South Philadelphia plan were unsuccessful.

One resident described the experience this way: “[It’s] like you’re home alone and you have the TV on to make yourself feel better,” referring to the omnipresence of the Piazza’s jumbotron. More attention to the success of the Piazza’s public space in the beginning might have established a better long-term investment. At Broad and Washington, the public space seems to follow the Piazza’s pattern, an afterthought given as concession to a profit-driven project.

Like the current situation in South Philly, the Piazza’s development process was contentious, but ultimately, Blatstein accepted feedback from neighborhood stakeholders who persuaded him to create a community asset. His vision for the site transformed many times: he first proposed a suburban-style strip mall, but widespread dissatisfaction with this idea led him to plan a walkable, transit-oriented development inspired by Roman public space.

Blatstein’s initial Piazza plan, by Landmark Architectural Design (who designed Liberties Walk across Second Street), was criticized as “Disneyesque” because of their too-literal interpretation of traditional European architecture. In response to this wave of feedback, Blatstein switched to the Northern Liberties architecture firm Erdy McHenry to create a modern and neighborhood-specific Piazza. Mark Miller, the project architect, said the firm used walkways through the building to connect the sidewalk and the plaza and to facilitate easy access for the neighborhood. The designers had pinpointed accessibility as the key feature of Roman piazzas and made it one of their main priorities for Northern Liberties. 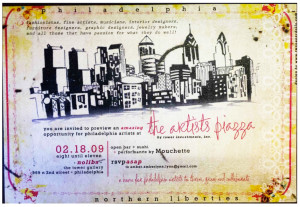 “A home for Philadelphia artists to thrive, grow, and collaborate,” a postcard inviting artists to the Piazza | Courtesy of Amber Lynn Thompson

Beyond design, the Piazza’s retail space also incorporated the local community at first. Six months before the Piazza’s grand opening, Blatstein hired Amber Lynn Thompson, a Northern Liberties artist, to help bring in a curated selection of creative retailers to whom he offered new commercial space and affordable rents. The initial tenants ranged from a designer jeans store to a tattoo display gallery, and the Piazza hosted a constant stream of public events, successfully attracting visitors and locals alike.

While it may not feel like it today, Blatstein spent years trying to create access and vibrancy in Northern Liberties. This marks the most important distinction between the Piazza at Schmidt’s and the Broad and Washington proposal: the Piazza was planned with the goal of enticing people in, while the Hawthorne “village” was conceived as a private amenity, its design inherently not intended for the larger community. It’s logical that South Philadelphia residents are asking for the “Good Bart” who took neighborhood feedback in Northern Liberties, but is the Piazza worth emulating?

After its 2009 opening, it seems that Blatstein’s and the community’s ambitions for the space were divergent. The artist community proved temporary—an opportunity to create excitement about the Piazza, to get the development off the ground in spite of the 2008 market crash. Arik Victor, the owner of Creep Records, a Piazza store since 2009, explained that Blatstein was “just trying to cover his utilities […] to make it through the first one or two years, which are the hardest for any new business.” But for Thompson and those she had recruited to the development, it was a dream come true: a real arts community in a brand new building in their own neighborhood. She explained that she “fell in love with the idea,” and was working full-time for Blatstein to make it happen.

In the first few months, tension came to light in the initial planning of weekend markets. The artists wanted small, curated events while Blatstein preferred hosting as many vendors as possible, since each paid a fee. Retailers soon found their storefronts blocked every weekend by dollar store vendors, or masses of fans, often intoxicated, who came for concerts. And while the original retail tenants earned the Piazza much of its initial praise, they had a short honeymoon. 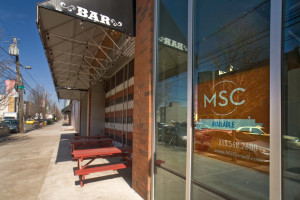 Despite offering discounted rents to the initial creative retailers, Tower Investments quickly began recruiting tenants who could pay more. Carrie Collins, the owner of Fabric Horse, an original Piazza store, described how she was served papers to vacate her storefront less than a year into her two-year contract. The arrangement allowed Tower to look for more profitable tenants, and ultimately, “it turned out they were shopping around the entire time and found someone willing to pay three times what I was paying in rent,” Collins explained. This strategy undermined the community orientation of the space, improving Tower’s bottom line but robbing the Piazza of the culture that Thompson had tried to create.

In recent meetings, the Northern Liberties Neighborhood Association has discussed ways to revive this “degrading jewel” of their neighborhood. The Piazza has faced high retail turnover and vacancy, especially in recent years. This fall, even the long-standing Piazza burger staple PYT announced it would move to the Fillmore venue in Fishtown this spring. While management has recently signed WeWork and Wahlburgers to fill some space, many Piazza storefronts, including key corner retail spaces, remain vacant. The number of visitors has also declined with the discontinuation of public events at the Piazza.

Though the web site still states that the Piazza “is a destination of the community for people, pets and one-of-a-kind events,” the only large-scale events in the past year have been just a few private, ticketed parties. Without programming or retail in the space, little else exists to attract visitors, and specific design qualities of the plaza discourage even residents from using it. And the central courtyard itself, a large swath of open impervious space punctuated by uninspired landscaping (including a patch of astroturf), has just nine picnic tables for public seating. 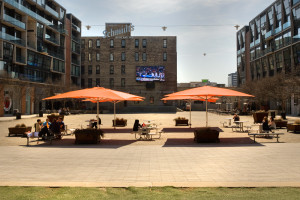 Where the Piazza’s flaws have become larger over time, they’re right up front at Broad and Washington. Urban scholars, most notably William Whyte, have consistently proven the ineffectiveness of raised or depressed public spaces. Without a close linkage to the street (“access” as Miller calls it), organic community use is much less likely to coalesce. Temple University’s recently completed Morgan Hall includes an elevated public space connected to the sidewalk with a gradual staircase. Though it remains detached from the street, this courtyard is at least still visible to the passerby from two separate entrances. At four stories above the sidewalk, the Broad and Washington “village” will feel more like entering a mall than a public plaza. And like a mall, it will require successful and attractive retail, which will be difficult without the benefit of a city street’s visibility and walk-in customers.

The Piazza illustrates the difficulty developers face in creating integrated and accessible public space while trying to meet their bottom line. A successful and self-sustaining project takes clever design, consistent programming and a long-term commitment to investing in the larger community vision—elements thus far absent from the Hawthorne plans. South Philadelphia neighbors are demanding more from Blatstein and Tower Investments, but the jury’s out on whether “more” means replicating the Piazza at Schmidt’s, where the jumbotron is always on, but no one’s around to watch.

Kim Bernardin Kim Bernardin will complete her Urban Studies degree at the University of Pennsylvania this spring. She is fascinated by the way that people interact with the built environment, and is hoping to follow this interest to graduate school and beyond.