Drexel Reveals Next Step In Innovation District With Schuylkill Yards 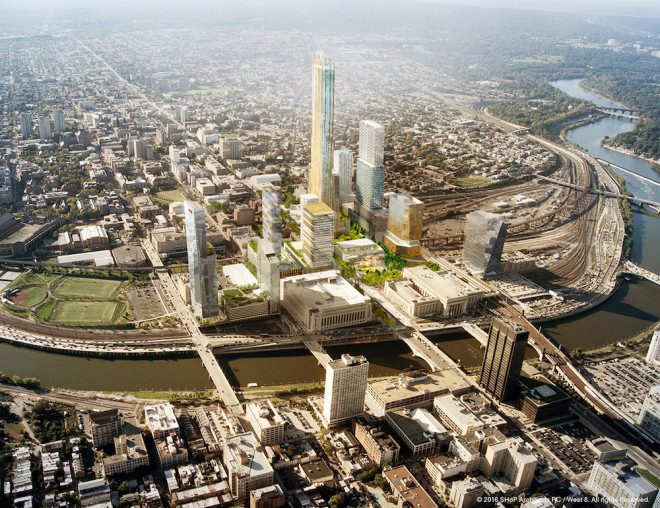 On Wednesday, Drexel University officials unveiled what may become the most defining development of their Innovation Neighborhood district with the official launch of Schuylkill Yards and the announcement of Brandywine Realty Trust as master developer. The initial phase of the $3.5 billion, 20-year plan will redefine 10 acres of university-owned property adjacent to 30th Street station with five million square feet of mixed-use real estate dedicated to research laboratories, entrepreneurial and innovation space, and tech research facilities, with large-scale tower accommodations for commercial and residential construction.

At the announcement of the project, John Fry, the university’s president, said that the heart of Schuylkill Yards lies in innovation, inclusion, and a global reputation for education and research. Over 500 people showed up for the event held inside a pavilion-sized tent in the parking lot of One Drexel Plaza. (Read Nathaniel Popkin’s 2013 interview with John Fry HERE)

Brandywine is the developer of Cira Centre, with its three towers and the former U.S. Post Office contiguous with Schuylkill Yards.

Drexel and Brandywine are positioning Schuylkill Yards as both a major East Coast research and innovation hub and a dynamic intersection of progressive civic design and contemporary urban place making. The overarching vision of the project is to “make a connection to the river, create inclusive civic engagement for the surrounding community, redefine the university’s future, and contribute to the direction of the city,” said Fry. “This will be a community, not a corporate campus. A fully engaged ecosystem, morning, noon, and night.” 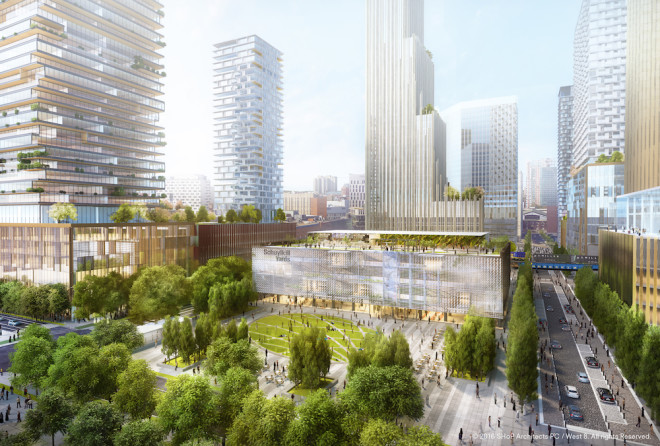 Gerard Sweeney, president and CEO of Brandywine Realty Trust, did not withhold his enthusiasm for the project. “This is a vision that will change not only how Philadelphia sees itself, but one that will change the perception of the city to the world,” said Sweeney.

The master plan includes eight new towers rising on the site. Existing buildings will be renovated and repurposed, like the Bulletin Building that will see the addition of view ports on its east façade, a new front screen, and the creation of an elliptical lawn. A network of public green space will weave the landscaping plan together with Drexel Square, a 1.3 acre park built on the parking lot of One Drexel Plaza at 30th and Market Street, the transformation of John F. Kennedy Boulevard into a pedestrian-minded greenway (dubbed the JFK Esplanade), and lining Market Street with three rows of trees and multiple designated bike lanes.

Fry emphasized the inclusion of the surrounding community, expressing that an underlining driver of Schuylkill Yards will be to provide education, economic, and employment opportunities and business development for residents of West Powelton and Mantua, both federally-designated Promise Zone neighborhoods. Drexel and real estate partner Wexford Science + Technology made a similar commitment last year with the Science Center’s redevelopment of the 14-acre former site of University City High School for uCity Square. Drexel purchased the property for $25 million from the School District in 2014. With Schuylkill Yards, Fry said that the university plans to partner with the School District to provide capital improvements to public school facilities and educational outreach programming to students. 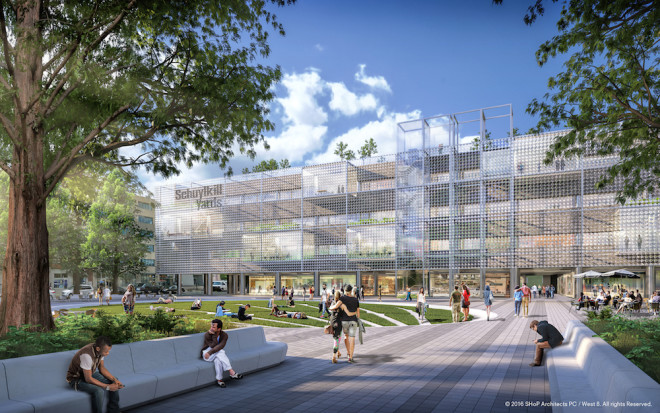 View from 30th Street looking at Drexel Square and a remade One Drexel Plaza | Rendering: SHoP Architects and West 8

“This is not a trickle down approach,” reiterated Sweeney. “We will be actively partnering with community leaders and engaging in socially responsible inclusive placemaking and development.”

It was largely speculated that Brandywine would be chosen as the master developer due to the immediate proximity of the Schuylkill Yards site to the Radnor-based real estate firm’s Cira Centre, EVO, and FMC Tower projects. Drexel began a national search for a master developer with adviser Jones Lang LaSalle in the fall of 2014.

Schuylkill Yards was designed by SHoP Architects. The New York-based firm will be handling district planning and architectural standards, and Netherlands-based West 8 will oversee public space and landscaping development. Gotham Organization, Inc. will lead residential development and Longfellow Real Estate Partners is charged with the life sciences component. According to Sweeney, architects of the expansion of the Children’s Hospital of Philadelphia will also play a role in future construction.