The Long Death And Rebirth Of The National 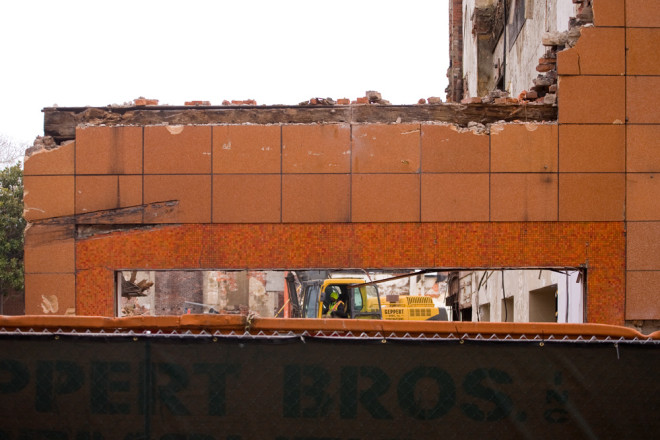 Last week as Geppert Brothers’ Volvo demolition excavator made its way from the old guts of the National Products Company building and out to its famous orange façade, fans of the Midcentury Modern beauty winced. Isn’t the façade historically protected? Wasn’t it to be incorporated into the residential/commercial development happening there? Despite the violent giant industrial claw’s suggestion, yes and yes—it will be fully rebuilt.

While the orange tiled façade was the very reason the National was added to the Philadelphia Register of Historic Places, it suffered from decades of wear and tear, and well over a decade of inattention. Its poor condition led the Philadelphia Historical Commission (PHC) to approve a plan to dismantle and reconstruct it as far back as 2007—a condition that has carried over through each successive redevelopment plan for the site.

(A disclaimer and an apology: I had forgotten this condition when I compiled the Lost Buildings of 2015 list and intimated that the façade would be preserved while only the building behind it would be demolished. I regret the error.) 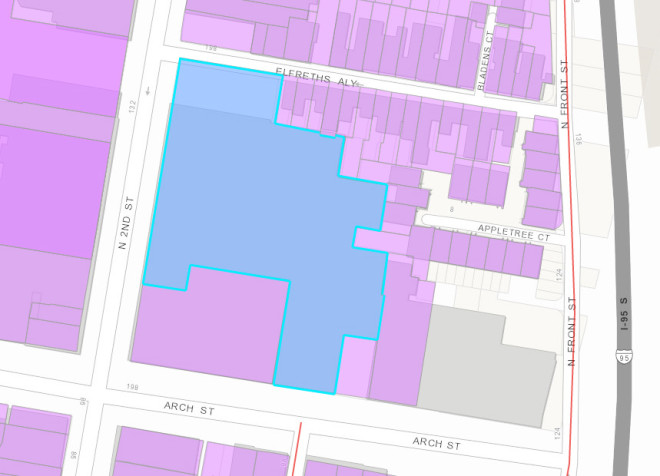 One of the reasons the site has proven so difficult to redevelop is its unusual layout. As Jacob Adelman explained for the Inquirer in September, The National’s polygonal parcel came about as the company grew from 1929, when it first moved in at 111 North Second Street, through its closure in 1996. For the last 20 years, the dazzling building has remained empty, save for a few Fringe performances, even as Old City evolved around it, with one large residential development across the street even taking the National’s name. 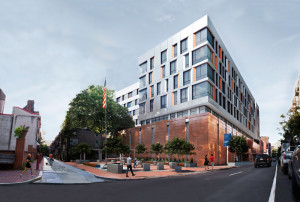 A rebuilt National, including a wrapping orange façade behind a rebuilt Flagpole Park at the end of Elfreth’s Alley | Rendering: Barton Partners

According to records at PHC, at least six proposals to redevelop the property came and went from 2003 through 2012, including those with 10- and 15-story additions fronting on Arch Street. In 2012, the property was last sold to Patriot National LLC, and it appears that they’re the ones who’ll finally get it done.

With Dale Corp. as the developer, The National at Old City East will rise six stories and include 192 apartments with 57 parking spaces and 64 bike spots. The building’s design, by Philadelphia’s Barton Partners, features silvery metal panels with orange and white insets to complement the fully rebuilt façade, including the zigzag canopy and stainless steel signage. And, it’s worth noting, a reimagined Flagpole Park.

For years, about 20 to be exact, “Flagpole Park” has required quote marks, as it’s been little more than a glorified parking lot and an almost-staging-ground for the National proposals that never happened. Not exactly the greatest transition from historic Elfreth’s Alley. The northern edge of the National property, which faces Flagpole Park, carries the orange façade over to Elfreth’s Alley, something that errant vegetation has obscured over the years. (Note the differences in Google Street View’s snapshots over the last decade.) When completed in 2017, the new National will feature a landscaped plaza for Flagpole Park coming off of Elfreth’s Alley, the orange façade serving as a striking backdrop. In the meantime, while the site is under construction, a midblock crosswalk will help pedestrians across the long block of Second Street between Race and Arch Streets.

While the buildings the National Products Company occupied date as far back as the late 1800s, their workmanlike appearance was largely forgettable: four stories with no cornice line, stuccoed over at some point. The fanciful façade changed that when it was first installed at 113–21 North Second Street in 1957–58. When National added 109 and 125 North Second in 1962, the façade was made uniform throughout: orange terra cotta tiles with white vertical granite reveals, and a more intricate terra cotta tiling over the main entrance of the showroom. Its Googie-esque look came from the partnership of John Sabatino and Morton Fishman.

Sabatino & Fishman, according to biographical info written by Emily Cooperman for the Athenaeum’s PAB project, practiced together 1955–67. During that time, they received a number of commissions from the Archdiocese of Philadelphia, including Our Lady of Consolation Church in Tacony and Our Lady of Good Counsel in Southampton, Bucks County. Their project most akin to the National, however, was less ecclesiastic and more bombastic: the Latin Casino.

“The Latin” opened on Route 70 across the road from the Garden State Park racetrack in 1960—a year before the name Cherry Hill was officially adopted as the local township. Randy Alexander wrote a great profile of the place for South Jersey magazine in 2014. Frank Sinatra and Dean Martin took up residence there, Diana Ross canceled a run of Supremes shows there after her dogs died from ingesting rat poison on site, Richard Pryor recorded his Grammy Award winning album Is It Something I Said? there. In 1978, the Latin became Emerald City, ushering in the short-lived disco era before converting into a rock club where Prince and Talking Heads played, among others. The Cure made their American debut there in April 1980 and journalist Van Gosse, covering the tour for Melody Maker, made a recording of the show. A fire destroyed the building in the mid-1980s, and Subaru opened its American headquarters there in 1986. (As Inga Saffron noted last summer, Subaru is relocating four miles down the road to Camden, thanks to tax breaks equaling the cost of the project ($118M) from the State of New Jersey.)

The swingin’ sixties of the Latin have long left Cherry Hill, but the National’s midcentury showmanship will return to Old City. In 2002, a proposal to demolish the building prompted the Historical Commission to motion it for designation, and on November 8th of that year, it was accepted into the Philadelphia Register of Historic Places, the first midcentury commercial building to do so. (The Old City District designation came about a year later.) 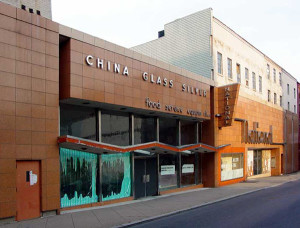 Assuming its full execution, reconstruction will likely leave the National in better shape. The PHC meeting minutes from October 10, 2014 describe the condition of the tiles as “very poor,” and it approved a “complete disassembly of the orange tile wall and its faithful reconstruction.”

“The PHC approval [of demolition] and the building permit predicated on it require salvaging the signage, storefronts, and other stainless steel elements as well as the granite channels,” says Jon Farnham, PHC’s executive director. “The façade will be reconstructed with the salvaged pieces and new matching tile.”

A sample tile at PHC does show an exact match to the original, and it’s manufactured for durable exterior use, unlike those on the original façade, which were rumored to have been interior tiles, thus the wear and tear. The terra cotta tiles will be manufactured by Boston Valley Terra Cotta in Orchard Park, NY. 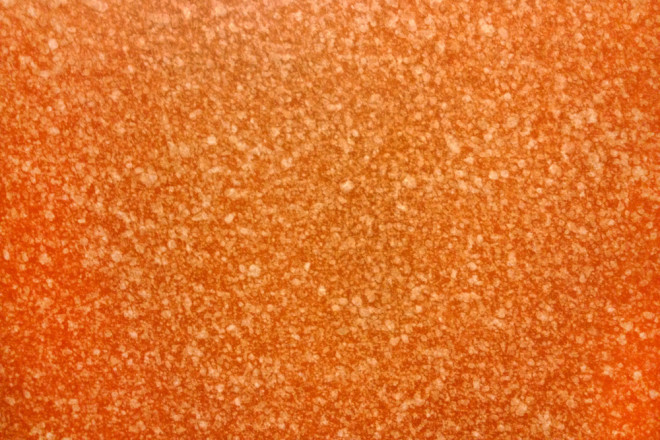 The National Products Building’s orange façade and timeless signage—”CHINA GLASS SILVER . . . food service equipment . . . since 1929″—will be back, and arguably better, a unique case of preservation by demolition and reconstruction.