The Happy Rooster’s Coop Gets A Redo 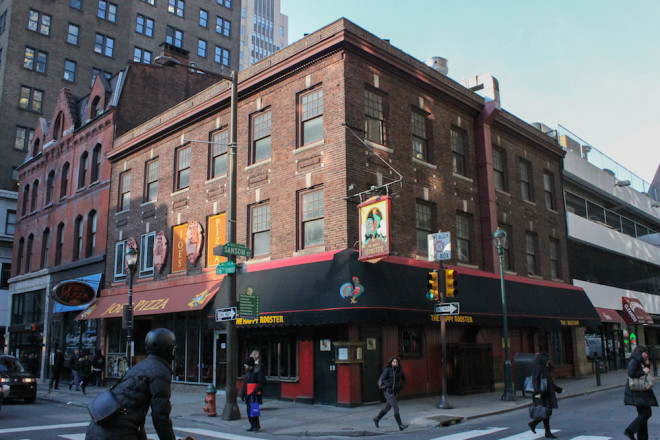 Origins unknown. Although no records show by whom or why the Wilson Building was built at 16th and Sansom, Temple University’s Law School moved in when it opened in 1911 | Photo: Michael Bixler

The Wilson Building at the corner of 16th and Sansom Streets attracts the eyes of pedestrians largely because of its ostentatious pizza signage and the sprawling awning of the Happy Rooster bar. The place is unremarkable on the surface save for modest decorative brickwork on its second and third floors. However, the 105-year-old building makes up for its low key dressing with a vital history. And now the empty upstairs floors, vacant for years, will become apartments, the grubby façade cleaned up.

Off The Books and Into The Classroom

In 1910, workers began construction on the Wilson Building on the southwest corner of 16th and Sansom Streets. No records credit the architect for its design nor the construction firm. The origin of the building’s name is also unknown. Likely William Dougherty, who owned two small neighboring buildings at 1602 and 1604 Sansom Street, built it on spec. He also built new office space for his company next door to the Wilson Building shortly after construction was complete.

The Wilson Building opened for business on January 4th, 1911 with two major tenants: the Perfect Tire Sales Company on the first and second floors and Temple University School of Law on the third.

The Perfect Tire Sales Company was best known for its “Reason” product line, an internal tire casing that reduced punctures and blowouts that doubled the life of the tire. It was made of a specially compounded rubber surrounded by sturdy fabric cemented inside the tire. The product was guaranteed to resist flat tires for one year or 15,000 miles.

Temple University School of Law, only 35 years old, was already highly respected in the region. Most students enrolled in the program commuted into the city. Before the Broad Street Line was complete (service from City Hall to Olney Avenue began in 1928), getting up to Temple’s main campus from Broad Street Station at Broad and Market or Reading Terminal was inconvenient. TUSL relocated classes and the department to the Wilson Building to ease the commute for students and allow for easy access to courts, law firms, and libraries. The convenient location led to a much higher enrollment than the school had anticipated. TUSL expanded into the second floor after the Perfect Tire Sales Company vacated in 1915. Once renovations were complete, the Temple University College of Music also held classes there.

On September 18th, 1922, both the School of Law and College of Music moved into a new building at 1521 Locust Street (demolished). Five years later the law school moved into the Public Ledger Building on Independence Square.

The Philadelphia School of Office Training took over the building next, moving from the Loder Building, another long-gone Center City building. The technical school trained students in secretarial work, typing, shorthand, and filing. The school installed a massive wraparound sign on the building’s ornate façade. PSOT stayed in the Wilson Building for only four years, but remained in operation in the city until 1987. 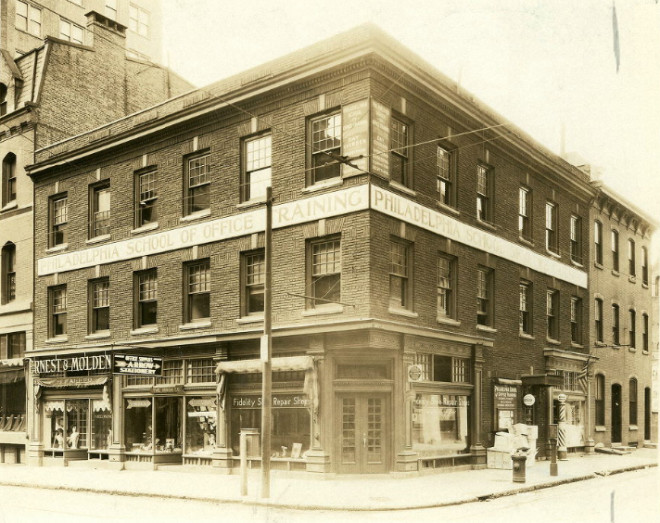 In the 1930s, the Wilson Building was occupied by MacCallum Photographers, a photography firm run by brothers Richard H. and Harold B. Pough. The duo sold a large variety of foreign and domestic cameras, film, and other photographic supplies. They also provided professional photography services. Richard H. Pough left the company in 1936 and went on to become a celebrated conservationist, doing work for the National Audubon Society, the American Museum of Natural History, Open Space International, and the Natural Area Council, among others. MacCallum Photographers moved to 8th and Chestnut Streets in 1939. The firm opened a branch office in Ardmore in 1944 and officially changed its name to MacCallum Stores.

The building was owned by real estate firm Jackson & Cross from the 1940s to the early 1970s. The firm still exists today as Jackson-Cross. The National School of Nursing used the old classrooms on the 3rd floor during this period. Photostats, a photo processing and copy center, occupied the 2nd floor.

One notable quality of the old Wilson Building is its success in keeping storefronts active for extended periods of time, a benefit of its location. The building is currently configured with only two storefronts, however it once featured four at 118, 120, 122 S. 16th Streets and 1604 Sansom Street. In 1968, DeLong Restaurant, Tom Thumb’s Hobby Shop, and a barber shop occupied three of the spaces. Dentist Doc Ulitsky opened the Happy Rooster, a power den for men only, on the corner at 118 South 16th Street that same year. Jackets and ties were required; women could only enter the bar, with its French fetish decoration and menu, if they were accompanied by a man. Two owners later, the popular bar and restaurant still attracts a branché crowd. Former owner Rose Parrotta expanded the Rooster into the small Sansom Street-facing retail space at 1604 Sansom in 2002. Joe’s Pizza, the current occupant of the retail fronts at 120 and 122 S. 16th Streets, moved into the DeLong Restaurant space in 1974. The pizzeria expanded into 122 S. 16th Street and added dining space on the 2nd floor in 1998.

Notorious real estate speculator Sam Rappaport purchased the building in 1973. His family still owns it today. Currently, the Happy Rooster and Joe’s Pizza are the building’s only tenants. The upper floors are vacant save for Joe’s small dining room. The awnings of Joe’s Pizza and the Happy Rooster cover the street level exterior while large terracotta medallions of lion iconography–gestures, perhaps, to ancient Italy–hang on the 2nd floor façade in front of the pizza shop.

Most of the windows on the upper floors appear to be original, and the exterior looks like it has not been cleaned in quite some time. That is all about to change. Keeping up with recent and forthcoming renovations to historic buildings in the vicinity–like the Avenue of the Arts and Hale buildings–owners of the 105-year-old Wilson Building have recently applied for permits to convert the second and third floors into seven residential units.