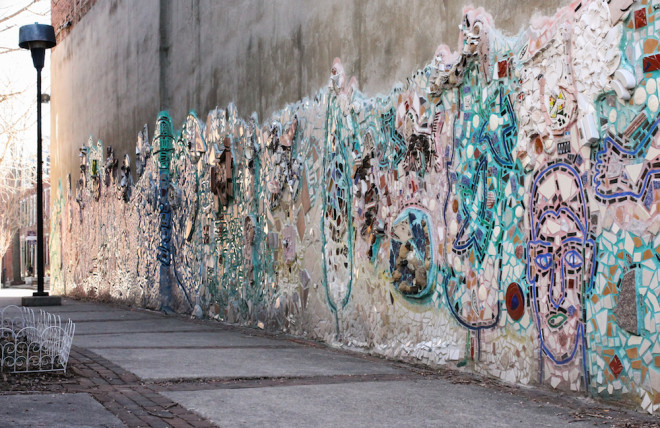 Despite a growing conversation about the destruction of murals and public artwork, no effective safeguards are currently in place for legal protection | Photo: Michael Bixler

When mosaic mural artist Isaiah Zagar shared the news that his 100 foot piece on the north-facing wall of Society Hill Playhouse would be demolished for new residential construction with Emily Smith, executive director of Philadelphia Magic Gardens, he had tears in his eyes. The Garden of Earthly Delights guides pedestrians through a serene, hidden pathway connecting 8th and S. Franklin Streets with Bradford Alley between Lombard and Rodman with a long fragmented wave of playful iconographic delirium suspended in broken tile. Zagar led a community art project to install the mosaic in 2011 over the course of a few monthly workshops with 30 students contributing to the piece. Horsham-based development company Toll Brothers acquired the Playhouse in 2015. Despite community opposition, the company’s current plans are to raze the building for 20 apartments priced at $500,000 to $1 million per unit.

Originally named Garrick Hall, the Playhouse was built in 1898 to serve as civic space for Jewish and Italian immigrants. Political rallies and protests were held there, as well as concerts and celebrations and theater. Then, in the 1960s, at a time when Philadelphia staged only traveling Broadway and tired hits, directors and actors launched the Society Hill Playhouse, to produce avant-garde productions, launching the city’s theater revival. The Playhouse and the sizable Zagar mosaic are the latest casualties of a booming real estate market riding roughshod through South Philadelphia. Smith is hosting a forum at Philadelphia’s Magic Gardens on March 3 to discuss public artwork at risk in the South Street area and collectively explore what measures the community can take to safeguard murals from future real estate development.

In a city internationally renowned for its murals, clear dialogue on the issue of public art preservation tends to grow murky when it comes to outdoor paintings, street art, and non-commissioned neighborhood works. According to the federal Visual Artists Rights Act, developers must give an artist 90 days notice that a mural is slated for demolition. However, property rights often go unchallenged and neighbors not actively engaged in community zoning meetings are generally unaware that a mural is at risk until demolition is well underway. A void in consideration and communication on the part of the developer often leads to confusion and animosity among residents.

“What is most upsetting for me, and what I want to challenge, is the lack of conversation between the community and developers when public work is at risk,” says Smith. “I’m not opposed to development and I understand it is a vital aspect of our city’s growth, but I am opposed to public artwork coming down with no talk about saving the work or commissioning new work.” 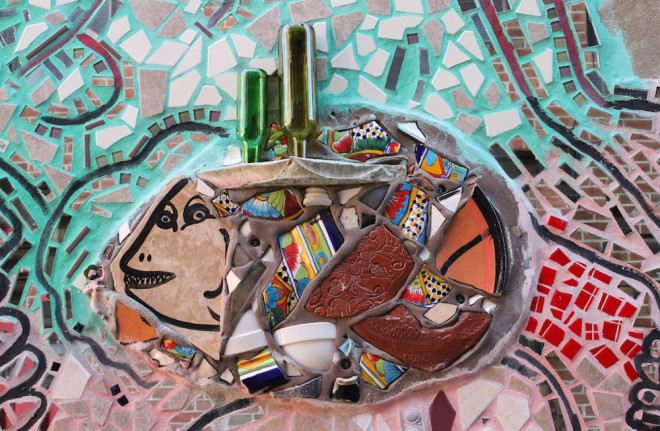 Zagar, reacting to the loss of the Playhouse mosaic, wrote in a letter before leaving to work on a mosaic project in Mexico, “Art creates a state of mind and body that is not always visible to us. And when that is destroyed by neglect or malfeasance or just profit motive, it chips away at our humanity and what makes our culture bright.”

It’s a complicated issue, and one that Jane Golden, founder and executive director of the Mural Arts Program, says must be approached with a grain of salt. “On one hand, we never want to stand in the way of economic development. Cities are dynamic, fluid, ever changing, and we want to respect that,” says Golden. “On the other hand, the murals of this city–the murals, the mosaics, the sculptures–are city assets. They have come, over the years, to represent our lives, hopes, struggles, triumphs, fears, aspirations.”

Since 1983, the Mural Arts Program has created almost 4,000 works of public art, what Golden calls an “autobiography of our city.” Murals indeed often become a point of neighborhood pride and part of the cultural fabric of a community, much like the widely adored Dr. J mural at 1219 Ridge Avenue and the John Coltrane mural at 32nd and Diamond that was demolished by Pennrose Development in 2014. Many become meaningful landmarks etched into every day memory. As such, there is an unspoken assumption among residents that a mural will remain a permanent public work of art. When a mural is demolished or covered by new construction resentment in the community often follows. “There is all too often no reaching out to the community, to Mural Arts, to the artist, and people do get angry, sad, and frustrated,” says Golden. “They feel that something important has been taken away from them.” 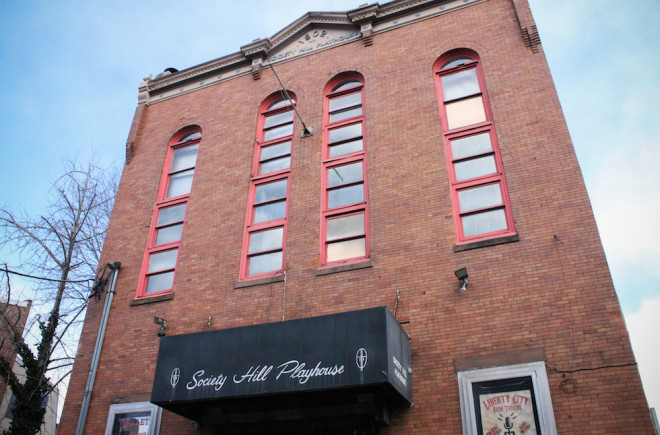 Efforts to file a nomination by a group of preservationists for Society Hill Playhouse for placement on the local historical register were dashed after demolition permits were granted to development firm Toll Brothers, sealing the fate of the 118-year old building. The former civic meeting hall of Jewish and Italian immigrants was built in 1898. It will be razed for 20 new luxury apartments | Photo: Michael Bixler

With scarce dialogue among the artists, residents, and developers, the destruction of a mural is often perceived an imperious encroachment on the neighborhood rather than revitalization and urban growth. “Public art changes lives, and I think it is the most powerful tool we have in transforming our physical and mental landscapes. If you are removing a public work of art you have a responsibility to that community to replace, save, or commission something in its place,” says Smith. “It is a matter of respecting and honoring the residents who have made the neighborhood what it is.”

Golden says a respectful approach by developers can and should be taken to create goodwill and soften animosity between all stakeholders. “We would love to work with developers and others who think about community reinvestment and all that means. We feel that with respect, clear communication, and a sense of balance some of this can be resolved.”

Smith hopes that the meeting on March 3 will elevate the conversation with city government officials and provide a driver for community action to deliver meaningful results. “Having people who can show up to zoning committees or talk with our local representatives is crucial,” says Smith of residents around South Street. “I think we just need to be a part of the conversation.”

A community forum on the protection of public artwork will be held at Philadelphia’s Magic Gardens, 1020 South Street, at 6PM, March 3.