Naming The Nameless On Lincoln Drive 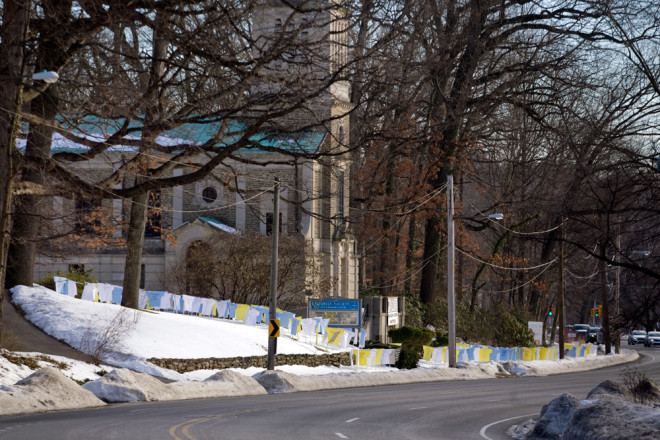 From either direction on curving Lincoln Drive, the Heeding God’s Call Memorial to the Lost stands out | Photo: Bradley Maule

For years, motorists and riders of SEPTA’s H bus have seen well-placed signs on Lincoln Drive seeking help to “restore the pergolas.” The Mt. Airy Gateway, signifying the boundary between that neighborhood, Germantown, and the Wissahickon Valley Park, has been mostly restored, its repointed stone pergolas recently topped with gorgeous wooden trellises. Just up the street, another visual installation now commands the observer’s attention: the Memorial to the Lost.

Installed on the grounds of the Unitarian Society of Germantown, Memorial to the Lost is a pseudo-annual project of Heeding God’s Call (HGC)—one t-shirt for every victim of gun violence in their respective city, the name and date of death prominently displayed. In previous years, it has graced the grounds of the Lutheran Theological Seminary and the University of Pennsylvania locally, and regionally in Harrisburg, Chester, and Washington, DC. And while the name Heeding God’s Call clearly marks a faith-based organization, exactly which faith is kept intentionally open to interpretation. 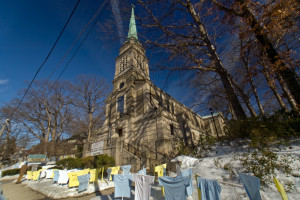 241 t-shirts, one each for Philadelphia’s victims of gun violence in 2015 | Photo: Bradley Maule

“We’re very conscious about our multifaith approach,” says Bryan Miller, the organization’s executive director, citing past installations at a Quaker meetinghouse, Jewish synagogue, and Muslim mosque. But one thing without any ambiguity is the call the organization has heeded, the one reflected in last year’s amendment to the group’s name: Heeding God’s Call to End Gun Violence.

Founded in 2009, HGC’s first action came together on Martin Luther King weekend of that year, an organized protest of over 200 outside of Colosimo’s Gun Center. While it had long been popular with the Philadelphia Police Department, whose roundhouse headquarters are five blocks south and whose union’s lodge was four blocks west until its relocation to the Far Northeast in 2013—and who had no official affiliation with the store—Colosimo’s also earned a darker reputation tied to violent crime. The Brady Campaign in 2003 rated the store fifth in its national list of “bad apple” dealers, those notorious for facilitating straw purchases, the only gun dealer in Philadelphia with so poor a rating. (See Steve Volk’s cover story for Philadelphia Weekly HERE.)

The HGC protest, during which 12 people were arrested for conspiracy, defiant trespassing, and disorderly conduct, helped elevate the profile of Colosimo’s notoriety in the changing Callowhill neighborhood. Citing hundreds of crimes committed with guns traced there, in September 2009, the Bureau of Alcohol, Tobacco, Firearms and Explosives revoked Colosimo’s license and they closed for good. (See Jeff Gammage’s report for the Inquirer HERE.)

The first Memorial to the Lost came in 2013 at the Chestnut Hill Presbyterian Church with 288 t-shirts, one for each Philadelphian murdered by a gun the previous year. Now in its fourth year of installation in changing venues, this year’s memorial dovetails with the mission of inclusiveness at the Unitarian Society of Germantown (USG), in particular the tenet to “love thy neighbor as thyself.”

“Hosting the memorial was a very natural next step for us at USG where our mission is to build beloved community with compassion, service and empowerment,” says Rev. Daniel Gregoire, assistant minister at USG. “Each of us is called to bring that community into being by recognizing the inherent worth and dignity of every person and the interdependence of all life.”

A Protest Rooted in the Unitarian Faith 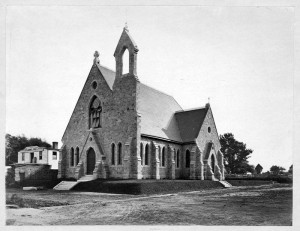 That concept of unity and toleration drives the Unitarian Universalist Church (UU), which first took root in Philadelphia in 1796 with guidance from its English founder Joseph Priestley. The Philadelphia church’s first minister was the scholar and abolitionist Rev. Dr. William Henry Furness. The reverend’s son Frank became a decorated veteran of the war fought for abolition and preservation of the Union—and Philadelphia’s most celebrated architect.

Frank Furness’ design for the First Unitarian Church at 2125 Chestnut Street, still used by the congregation today (and by the occasional R5 Productions show), was completed in 1886. That was twenty years after he received his first Philadelphia commission—for the Unitarian Church of Germantown. (Frank Furness: The Complete Works, by George E. Thomas, Jeffrey A. Cohen, Michael J. Lewis, 1996, p. 146.)

In 1866, the eight miles to Center City was a bit of a haul for services every week, and the Unitarian Society of Germantown, founded the year before to serve the Northwest UU community, desired its own building. Completed in 1869, Furness’ Germantown Unitarian Church opened at busy Chelten Avenue and Greene Street. The church stayed there for nearly 50 years until the congregation outgrew the space. In 1928, it relocated to a six-acre hillside along Lincoln Drive and a new building designed by Edmund Beaman Gilchrist. The old church was demolished shortly thereafter; the Joseph E. Coleman Northwest Regional Library has occupied the site since 1978.

Mini-gallery of Unitarian Society of Germantown:

Before the first church’s demolition, some of its intricate woodwork was moved to Furness’ First Unitarian Church in Center City; the stained glass windows were relocated to the new Unitarian Society of Germantown. The main window behind the altar, featuring Christ as the Good Shepherd, was designed by USG congregant Nicola D’Ascenzo, the artist whose stained glass adorns the windows at the National Cathedral in Washington, the RCA Victor Building in Camden (“his master’s voice”), and the Washington Memorial Chapel in Valley Forge.

Gilchrist, a Germantown native, was intricately familiar with the area. Having worked first for Horace Trumbauer and later Wilson Eyre, he had an eye for stately homes and designed several across Northwest Philadelphia and the suburbs, many for George Woodward including the “French Village” and its ornate gates at Emlen Street and Allens Lane. (Sandra Tatman, Athenaeum of Philadelphia PAB.) He also designed the 33-story Lewis Tower (now Aria Condominiums) in Center City and the now-very-altered Blanche A. Nixon Cobbs Creek Library. For the USG, he drew from Sir Christopher Wren for an English Baroque-inspired building with a large steeple at the Lincoln Drive entrance.

Memorial to the Lost 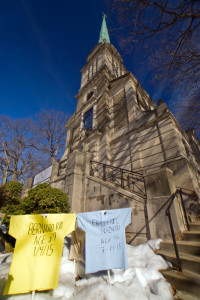 Now, just below the steeple, Memorial to the Lost‘s t-shirts wrap around the hedges, in front of the grand staircase where a “Black Lives Matter” sign hangs. To the right of the sign, a yellow tee reads “Bernard Ray, Age 39, 1/4/15.”

That night, two months short of his 40th birthday, Bernard Ray was in the wrong place at the wrong time, the 3700 block of Delhi Street in Hunting Park. The medic who responded to the call of an idle minivan that had hit three parked cars discovered him with a gunshot to the chest and pronounced him dead on the scene. Police determined the motive to be a robbery. As the case developed, homicide investigators identified two suspects. On February 5, 2015, they arrested 16-year-old Tre Waters and charged him with the murder of Bernard Ray, as well as Robbery, Criminal Conspiracy, and related offenses. On June 13, police nabbed 18-year-old Ramon Miranda attempting to flee police; as he ran, he discarded a 40-caliber Smith & Wesson handgun loaded with 12 rounds. He was charged with Murder, Robbery, Criminal Conspiracy, Violation of the Uniform Firearms Act, and related offenses.

The two teenagers, who each lived within two blocks of where they committed the crime, will spend their lives in jail for murdering someone they didn’t know with an illegal gun. (Neither offender was old enough to have legally owned a gun; to purchase a gun and apply for a permit in Pennsylvania, one must be 21.)

The stranger they killed was a father of four and a fixture at Earth Bread & Brewery in Mt. Airy. With the biggest smile on the floor, he shook the regulars’ hands and said “peace” before saying hello and sitting down to chat, which he always did. Earth hosted a fundraiser for his kids that packed both upstairs and downstairs; a memorial service at Chestnut Hill Friends Meeting drew over 300. 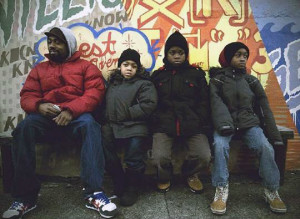 Now, Bernard Ray and the names of 240 others with the same sad fate share space on the grounds of the Unitarian Society of Germantown.

Jim MacMillan, the veteran journalist of the Daily News and a Pulitzer Prize winner for his work covering the Iraq War, has encountered lots of roadside memorials to the slain, especially since founding the Gun Crisis Reporting Project. Along with contributions from photographer Joseph Kaczmarek, writer Tara Murtha, and others, Gun Crisis amplified the epidemic of homicide by gunfire by analyzing data, pursuing solutions, hosting discussions at Temple, Penn, and City Council, and most visibly, providing powerful crime scene photography and commentary.

“I like the way I find myself running across these installations during the course of an ordinary day,” MacMillan says. “But this is one of the few situations where we can even read the names of the victims, which aren’t delivered with police data or most news reports, and we have Heeding God’s Call to thank for that.”

Humanizing the lost is the point of the project, the reason USG wanted to host it. “Hosting the memorial gives us a chance to honor human dignity while bearing witness to the lives lost and to confront those passersby with a tragic reality that they might easily choose to ignore,” says USG’s Rev. Gregoire. “We hope that witness and confrontation might lead to a transformation in the individual and in our society.”

On December 11, 1960, Rev. Dr. Martin Luther King, Jr. spoke at USG, calling his returns to Philadelphia “a real pleasure,” a nod to the three years he spent at Crozer Theological Seminary in Chester. (The Seminary moved to Rochester, NY in 1970 and is now the Colgate Rochester Crozer Divinity School. The main building in Chester is now used as offices for the Crozer-Chester Medical Center.) A bronze plaque marks the pulpit where he preached at USG. King’s sermon there considered the length of one’s life, the quest for self-discovery in it, and most fitting of the location at USG, the importance of remembering the command to love your neighbor.

In a way, USG embodies the sense of diverse community on which Mt. Airy and Germantown residents pride themselves, with a rainbow flag welcoming LGBTQ congregants and the banner reading “Black Lives Matter.” The latter is especially poignant for Memorial to the Lost. 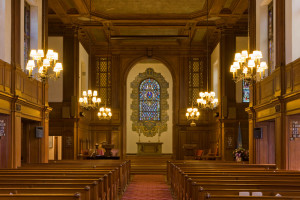 “We find it morally scandalous that so many of the t-shirts represent young people of color, disproportionately poor, Black men, killed by illegal guns,” says Rev. Gregoire.

Miller, Heeding God’s Call’s director, agrees. “It’s very simple,” he says. “If there were fewer illegal guns on the street, there would be fewer people of color being killed or going to jail.”

Philadelphia’s population is rising and, historically speaking, violent crime is down. But 241–the number of Philadelphia gun homicides in 2015–is still a lot of victims, 241 humans with names and lives left behind. The t-shirt installation gives each death a chance to be noted and mourned, and collectively it raises awareness of a problem that for many is easier to ignore. Its intentional visibility aims to have an impact.

“There are many programs with evidence of impact, such as public health interventions based on the Cure Violence program and innovations in criminology such as Focused Deterrence, and many more,” says MacMillan. “But such programs often struggle for funding.

“Perhaps these exhibits [like Memorial to the Lost] will lead to more public awareness, hopefully driving citizens to demand more from our leaders.”

Memorial to the Lost is installed at the Unitarian Society of Germantown, 6511 Lincoln Drive, through the first week of March. On Sunday, March 6th, USG and Heeding God’s Call will hold a service of remembrance for the victims immediately after the normal 11AM service.