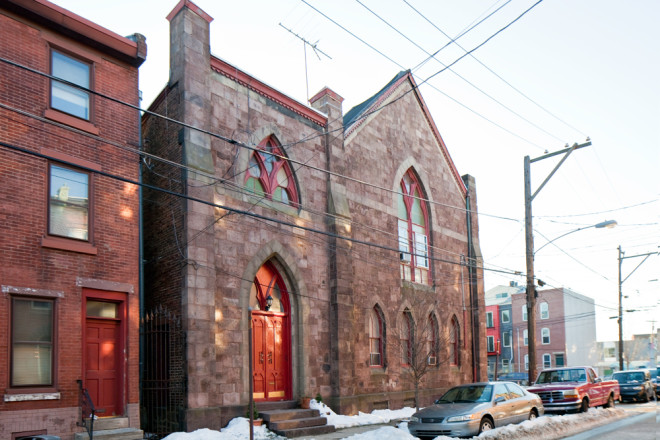 Two New Jersey real estate developers’ plan to demolish the East Montgomery Avenue Methodist Episcopal Church in Fishtown, built in 1875, is now in limbo after significant neighborhood opposition. The developers, brothers Jon J. and Stephen Levitt, have agreed to offer the church for sale at a price of $795,000 and have set a deadline for prospective buyers to come forward by March 20.

The building, at East Montgomery and Frankford Avenues, had been converted into artists lofts decades ago and is still occupied. The investors, operating as “Frankford Street Properties LLC,” spent $1,000,000 last October to buy the church and an adjoining lot with the intention of constructing eight duplexes with off-street parking.

The gothic style Ohio sandstone church is not listed on the Philadelphia Register of Historic Places, nor can it be added to it now that Licenses & Inspection has issued a demolition permit. If torn down, it would be the fourth demolition of a former church this section of the city has seen in the last year alone.

“The churches in our neighborhood are real targets for developers because they come with a large lot. They’re very attractive because they can squeeze as many units as they can onto them,” said Andrew Fearon, an architectural conservator who helped organize a group opposed to the demolition, the Neighborhood Preservation Alliance. “There’s just not a lot of mid-19th century building stock in our neighborhood, and particularly churches are disappearing at an alarming rate,” he said. “This building is a rare survivor.”

The group rushed to organize community meetings and launched a Change.org petition. The owners’ representative, realtor Ori Feibush, met with neighbors last week. During the meeting, at the Fishtown Recreation Center, Feibush told about a dozen neighbors he would list the church for sale, providing a possible reprieve from demolition. He posted the listing on Monday, however the listing provides little information on the building, and a “for sale” sign has yet to be placed on the property.

Feibush said he considers the offer “fair” both to potential buyers and worried neighbors, although he didn’t rule out demolition if the listing failed to attract any takers. He added that he was also considering the viability of preserving some of the facade as another option.

“This just isn’t an area where my clients are interested in maintaining the building and keeping rentals,” Feibush said, in a Monday phone interview. “But somebody else might be able to.”

But the $795,000 asking price is probably at least a little on the high side, according to several developers and real estate professionals Hidden City spoke with about the situation, especially for prospective buyers who want to maintain it as a rental property. 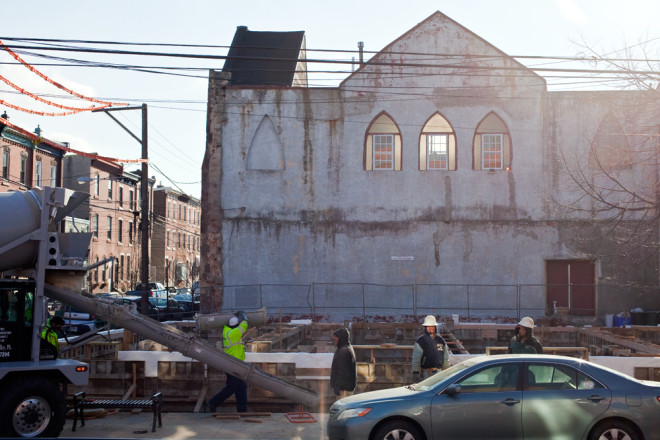 Workers pouring the foundation Thursday for the four duplexes being built on the corner of Frankford and Montgomery | Photo: Peter Woodall

Meanwhile, the Levitts have moved forward with the construction of four duplex row houses on the vacant portion of the site facing Frankford Avenue.

Fearon first encountered Feibush last year, during a push to stop the developer’s proposed demolition of the vacant Church of the Messiah, in Port Richmond. He said his group appreciated Feibush’s efforts to sell the Fishtown church, but was concerned about the rushed March 20 deadline for sale he’d imposed, particularly since two tenants of the church lofts retain leases through April 1.

The church has endured neighborhood change through its conversion into artist lofts by the painter Jorge Vega, who sold the building to the Levitts. As artists’ live-work studios, the building served as a gallery and community space as well and neighbors planted a garden on the adjacent lot. “I spent a lot of good times in that building–art shows, dinners with friends who lived there, a post-funeral gathering, for goodness sake.” said Kristine Allouchery, longtime neighborhood resident, underscoring the neighbors’ emotional connection to the building as a community hub rather than profit-making real estate venture. 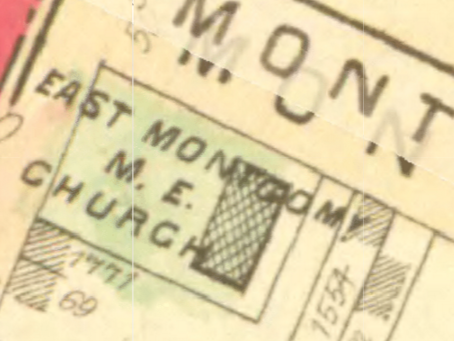 The church itself probably dates to the 1850s. The church survived a fire in 1885 and was rebuilt. Reverend Alexander Leo took over the church in 1912. An advocate for controversial eugenics programs, Leo was notable for his involvement in the construction of Puerto Rico’s first modern hospital, in Ponce. Fearon said the historic interior of the church was largely intact, despite the subdivision into loft units.

Historian Ken Milano, who also attended the neighbors meetings, said that in his opinion, Feibush had not been forthcoming with the community. Neighbors only learned about the plans after demolition permits were posted by the City Department of Licenses and Inspections, and several residents said the orange fliers vanished less than a day later.

Milano also cited mysterious aspects of the project, such as the identities of Feibush’s clients. As interest in the project has grown along with neighbors’ concerns, he has consistently declined to reveal the identity of the Levitt brothers.

However, a mailing address listed for the buyer of the Fishtown church corresponded to the Bridgewater, New Jersey residence of self-described Philadelphia real estate developer Jon J. Levitt, a former Merrill Lynch employee who also serves as a development director for the male empowerment non-profit ManKind Project.

Levitt and his younger brother, Stephen, along with both of their spouses, donated nearly $18,000 to Feibush’s failed 2015 bid for the 2nd District City Council seat in South Philadelphia.

On campaign finance forms the brothers are listed as “consultants” for an LLC called “JSA Business Development.” Through that company, and about ten other corporate entities with names like “Cardinal Real Estate,” “HB Asset Management,” and the “Levitt Family Partnership,” they have financed or acquired a number of real estate holdings over the past few years, mainly in Graduate Hospital and Point Breeze. At least one such project involved OCF.

Reached via email, Jon Levitt declined to comment for this story. Feibush said his involvement with pushing the project forward had nothing to do with his political relationship with the Levitts. “I get involved in all projects my clients are involved in,” Feibush said, in an email. “I believe I can contribute here and will do so as long as I am able.”

If neighbors ultimately win the fight to save the church, this will be the second recent victory for preservation activists in Fishtown. In July, the Philadelphia Historical Commission voted to give St. Laurentius Roman Catholic Church landmark status, protecting it from possible demolition. Fearon said that whatever came of this project, he and other neighbors planned to continue organizing as the Neighborhood Preservation Alliance to serve as a watchdog. The Change.org petition, addressed to City Council President Darrell Clarke, has 566 signatures, as of mid-day Tuesday. 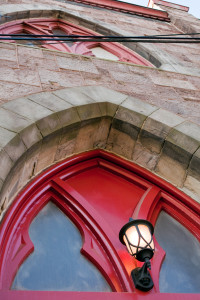 “These older, larger, unique structures are necessary and vital for a rich, vibrant, and diverse built environment full of character and history,” commented Susan Feenan, of Philadelphia, on the online petition. “Show some vision and love, be a good neighbor and re-purpose this beautiful building!”

But the system is rigged in support of demolition, said Fearon. “There is no mechanism within the zoning boards of the local [civic associations] to regulate these demolitions. Nobody knows about them until its too late,” he said. “These buildings define the character of our neighborhood, and several have already been demoed because we simply acted too late…and Ori has hinted that he has other buildings under contract.”

Milano added that he thought the church was also historically significant because it was one of the first buildings to be converted for use by the artistic community that would contribute to Fishtown’s current desirability. He noted the irony that the current, feverish wave of gentrification was cannibalizing the legacy of earlier periods of reinvestment and redevelopment, but said it was particularly egregious in this case.

“You’re getting four grand a month in rent already, why do you need to demo it?” he said. “It’s terrible. Everyone likes development but not at the cost of destroying the historic fabric of the neighborhood.”

Milano said he thought Feibush wanted to seem like a “nice guy” by entertaining neighbors concerns, but questioned how committed he was to saving the building, or why he would involve himself in another historic demolition after the fight over the Church of the Messiah.

“He readily admitted he doesn’t know anything about historic preservation,” Milano said.

Milano feels that when Feibush looks at a building he doesn’t see the history. He only “sees dollars and cents.”