Across From Flower Show, A Building Built By Flowers Blooms Again 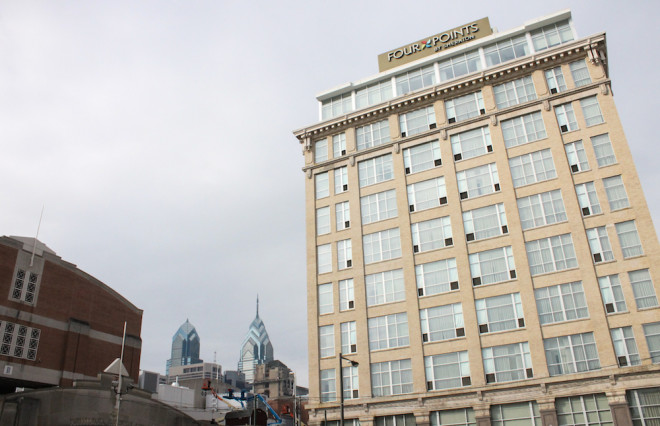 The Niessen Building, former headquarters of a successful cut flower wholesale company at the turn of the century, was saved from neglect and a life of hosting strip clubs when it was renovated for the Sheraton’s Four Points hotel in 2007. A tenth floor was added for a ballroom | Photo: Michael Bixler

Flowers were big business in Philadelphia at the turn of the 20th century. In addition to successful seed companies like Landreth, Maule, and Burpee, wholesale cut flower sales was a lucrative enterprise. A short-lived retail flower district formed around the neighborhood around the 1200 and 1300 blocks of Filbert, Arch, and Race Streets, the neighborhood now dominated by the Pennsylvania Convention Center, where the Pennsylvania Horticultural Society’s annual Flower Show opens Saturday. Among the floral businesses was Leo Niessen Company, a wholesale cut flower store at 1201 Race Street.

Leo Neissen and his brother Arthur started their cut flower company in 1895. The business did so well that they outgrew their store almost every other year, often moving into the larger space of one of their competitors. After their third move near 12th and Arch, the Niessens decided it was time to build a place of their own. In 1910, Leo Niessen purchased a 60′ x 100′ parcel at the northwest corner of 12th and Race Streets for a new headquarters. The new building would not only be large enough to house their company for decades to come, but also have leasable space for other concerns for extra income. 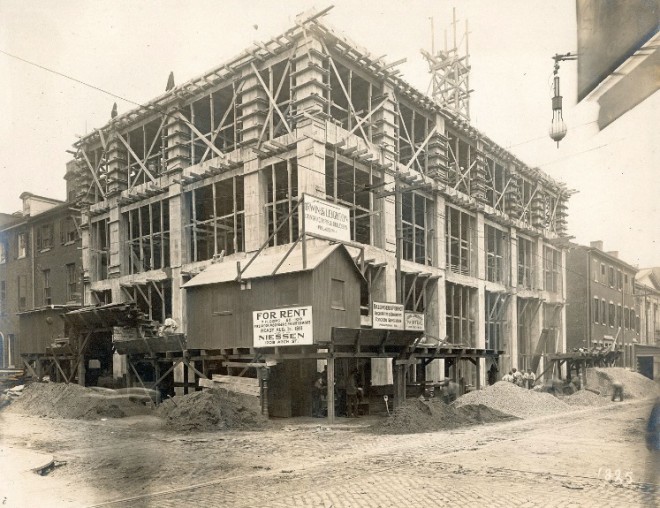 Niessen initially commissioned the architectural firm Ballinger & Perrot for a $50,000 fireproof, seven-story reinforced concrete building. Plans changed and by the time it was completed in August 1911, the Niessen Building stood nine stories and 129 feet tall. The pennywise company utilized the basement and ground floor for wholesale purposes, while every other floor was leased primarily to a variety of tobacco, textiles, and printing companies.

The new Leo Niessen Company store on the ground floor had three times the space as the company’s previous location. Tall ceilings and large windows bathed it with ample light. Niessen himself claimed that the building was so commodious and well-lit that the basement space of the building had more natural lighting than his last store location at 12th & Arch Streets.

The Niessen Brothers weren’t your typical florists. Their store became renowned nationwide for its variety and sheer volume of flowers available. They took in stock from greenhouses all around the region, with far-reaching distribution to match. By 1920, they had opened locations in Baltimore and Washington, D.C. The duo also engaged in activities outside the floral realm. On July 11, 1930, Leo Niessen took over the Tacony-Palmyra Bridge Company as president, while Arthur became general manager. Both maintained these positions until the company was sold in 1948. 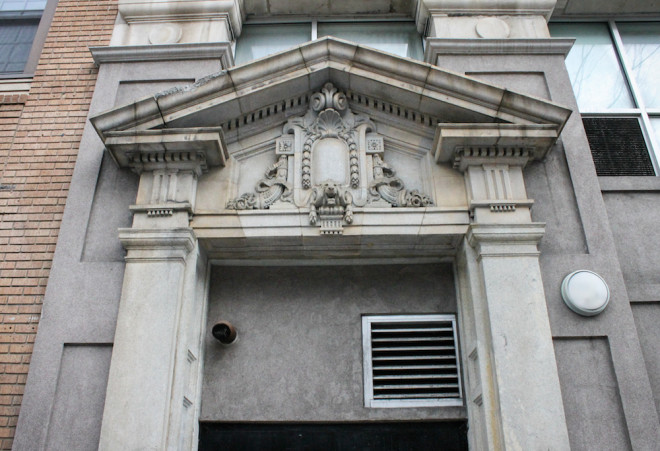 The floral company used the ground floor and basement space at the Niessen Building until 1949, when the Niessens moved to 256 South 23rd Street. They retained ownership of the building at 12th and Race Streets. The company later moved to 846 North 29th Street. Occupant turnover was high at the Niessen Building during the following decades, but some companies managed to stick around for quite awhile. Community Blood and Plasma Service operated out of the old flower shop space from 1950 until 1993. A printing company, Graphic Media Corporation, used the upper floors from the early 1980s until the building’s hotel conversion in 2005.

By the 1990s the neighborhood around 12th and Race Streets had fallen on blighted times. The Niessen Building’s boarded windows and dirty façade was indicative of the old floral district’s economic decline. However, state and city authorities were building a new $523 million Pennsylvania Convention Center directly to the south of the old Niessen Building, with renovations of the old floral company headquarters soon to follow.

In 1993, after a long battle with neighbors and Zoning, the ground floor space was rehabilitated for the Emerald Club, a high-end cabaret (a.k.a., strip club) that aimed to capitalize on the business of convention-goers.

The Emerald Club did well initially, then closed eighteen months after opening. The space was then taken over by Delilah’s Gold Club, which decorated the ground level façade with a large awning and several risqué ornaments. The club only lasted six months. A third strip club, Tiffany’s Cabaret, part of a nationwide chain of strip clubs out of Tennessee, tried their hand in the space in late 1995. It was closed a year later.

Springing Back To Life 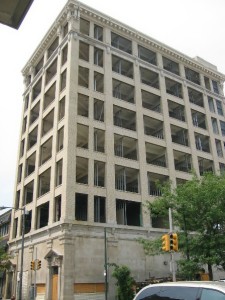 In 1997, the eighth location of Polly Esther’s Culture Club, a chain of 1970s-themed dance clubs, took over the Niessen Building’s ground floor. The disco spent eight successful years in the space until Chinatown-based Lam’s Realty Corporation purchased the building for $3,192,500 to renovate it for a 92-room hotel.

Lam’s Realty Corp. had already experienced success down the block with the conversion of 1227 Race Street into a Travelodge (now Days Inn Philadelphia Convention Center). For the Niessen Building, the developer managed to sign an agreement with Four Points by Sheraton. Over the next three years, the building’s facade was cleaned up, hotel rooms were installed, and a tenth floor was added for ballroom space, all designed by local architect Yao-Chang Huang. The hotel opened for business in December 2008.

Over a decade later, this once-blighted stand out is one of the nicest developments on its block. Business at the hotel is strong thanks to a busy Convention Center and its proximity to Center City, Reading Terminal Market, and flourishing Chinatown.