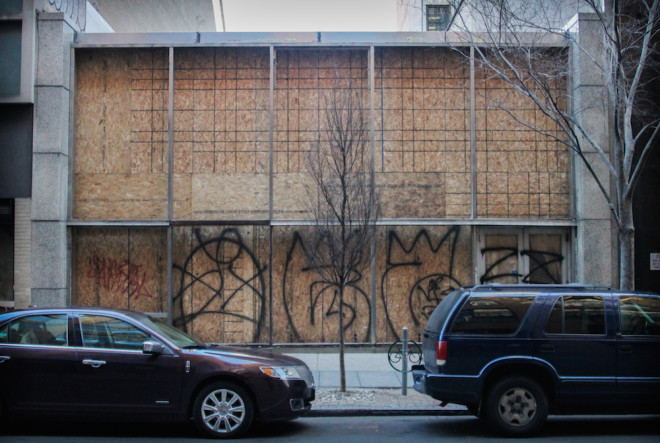 The Mercantile Library looking worse for wear on a winter day. The building was closed in 1989 due to concerns over asbestos and has sat vacant for twenty-six years | Photo: Michael Bixler

The Mercantile Library at 1021 Chestnut Street has seen better days. Designed by local architects Martin, Stewart & Noble, it was an award winning example of quintessential, mid-century architecture when it opened in 1952. The building maintained a minimalist allure years after its closure in 1989. It was placed under the legal protection of the Philadelphia Register of Historic Places in 1990–the first mid-century building to be added to the list–further translating the value of this once elegant, concrete and steel Modern landmark. However, the building’s current state as a decaying, skeletal structure in the heart of lower Chestnut Street undermines its architectural merit. It takes a trained eye to see past the graffiti-marred particle board and tarnished steel window framing.

The City sold the property to architect Michael Ryan and his design partner and wife Randee Spelkoman in 2006 for $1.7M. The couple originally planned to fully restore the building for office space for their firm, Michael Ryan Architects (read our 2012 interview with Ryan and Spelkoman about their plans for the library HERE). The project never materialized and the building was put back on the market in February 2014. Brickstone Realty purchased the library in September 2014 for $1,448,000. The developer’s exact plans for the future of the site have yet to surface.

With the building’s immediate proximity to Jefferson University, its health center, and innovation lab in mind, we would endeavor to restore the sleek grace of the Mercantile Library back to it’s airy, original form to be used as a co-working space for medical industrial designers. The potential for a partnership between Jefferson and the co-working enterprise is considerable and would make an ideal union when considering funding prospects for the project, human resource sharing, and research cross-pollination. Medical industrial design is a growing field, with enormous potential in Philadelphia considering the city’s two significant I.D. programs (at Drexel University and Philadelphia University) are both connected to medical institutions, Hahnemann and Jefferson, respectively. 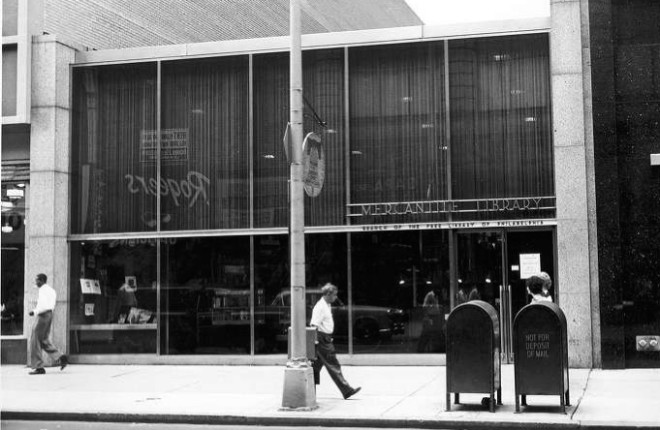 The Mercantile Library’s glass façade once opened up the building to the street with clean lines and simple geometry akin to a small, mid-century department store. Date unknown | Photo courtesy of the Philadelphia Historical Commission

The Mercantile Library on Chestnut Street was built by the Free Library of Philadelphia to replace and absorb the collection of its 19th century predecessor. That 10th Street building was demolished to make room for parking. Mercantile libraries were member-based literary libraries underwritten by merchants and bankers in an era before municipal public library systems were firmly established. (The Darby Free Library in Darby, Pennsylvania was chartered in 1743 and is America’s oldest public library.)

The Mercantile Library’s clean, modern design and wide, two story glass-paneled façade once drew passersby inside with its weightless intimacy. The library was originally filled with high-end modern office furniture by designers Knoll and Sjöström.

Martin, Stewart & Noble’s original design lends itself to a virtually seamless open-plan office conversion. The library’s interior was notably well-lit during its years of operation, both naturally and artificially. Blueprints of the original drawings from the 1950s indicate that an open floor plan contributed to the penetration of natural daylight into even the smaller, cloistered spaces of the interior. We retain both of these elements in the building’s schematic redesign.

Entering at ground level, employees and guests immediately connect with the reception area that features one wall of glass facing the street. Straight ahead will be a reception desk with the dumbwaiter remaining behind as a visual reference to the library’s original design. On the large wall to the left we consider either conserving the original mural, “Reading Room,” by Philadelphia artist Raymond Spiller or commission a new, digital work that holographically displays a rotating collection of historic patent drawings of medical instruments and other groundbreaking healthcare-related design. Keeping some form of artwork here serves a functional purpose–moving the eye up and making the height of the reception more evident. The ceiling height is just under 20 feet. 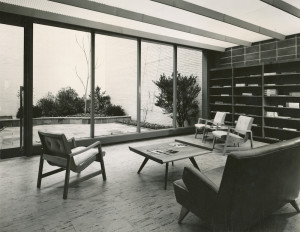 The courtyard in the rear of the downstairs reading room, 1952 | Photo courtesy of the Philadelphia Historical Commission 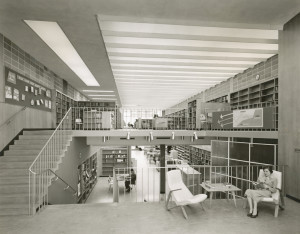 The library’s entrance and a view of the original, open floor plan, 1952 | Photo courtesy of the Philadelphia Historical Commission

Toward the back of this level is a small, soundproof room for quiet and privacy, like phone calls and one-on-one conversations, for when the open workspace gets too loud. In front of the soundproof room is a larger collaborative area for designers that may need to spread materials out for project meetings. When not reserved for group use, the area will also offers a pleasant view onto Chestnut Street for individual member use.

The rear windows look down into the courtyard at the lower level. Adjacent to the courtyard are three staircases. Spiral stairs currently lead to the roof. The structure has as suffered significant water damage in the last decade or so and the roof will require total reconstruction. Our plans would include moving most of the mechanical systems on top of the building to maximize interior space. A shorter stair case will lead to the back storage room and exit. The stair parallel, closest to the long wall leads to the lower level.

Throughout this level and the lower level we will employ an energy efficient ambient lighting system that has automatic daylight sensors. Natural lighting will be used to its full advantage. Automatic shades will be installed to reduce glare when required.

Taking the staircase down to the lower level from the reception area leads directly into the open workspace that is divided by another glazed glass conference room. To the right of the stairs (open to above) is a casual seating area. Adjacent is a filing and printing station. Along the left wall of the main workspace is a panel of bookshelves and storage–a call back to the shelving system in the original design. The original bookshelves have since all been removed leaving exposed concrete block walls. New shelving will be used to create seating alcoves that will feature mobile seating with tablet computers installed. 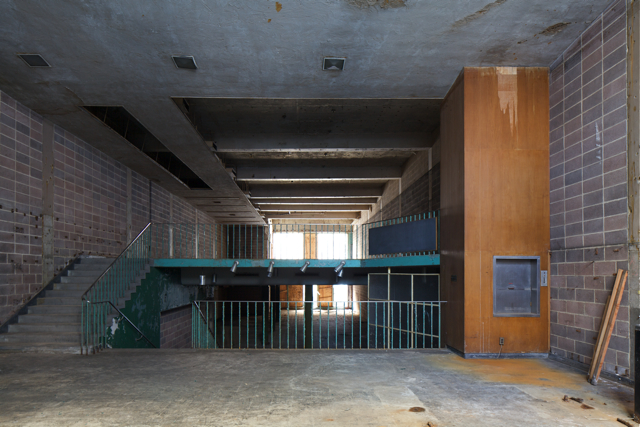 View of the library’s entrance in 2102. A serious roof leak has further deteriorated the interior of the structure | Photo: Peter Woodall

Along the shelving and alcove wall is a ramp that leads to the space under the reception area above. A kitchen, two soundproof rooms and two restrooms will occupy this subterranean space, mainly because natural light does not reach this area. The original restrooms were also in this section of the lower level which will minimize the run of new piping.

The two story building is dwarfed by the surrounding buildings, making it an architectural accomplishment to create the level of natural light cast into the interior. Between the glass front façade and rear courtyard, users of the space will have a valuable, airy connection to the outside environment, making the space feel more spacious, less claustrophobic, and conducive to the kinetic flow of ideas and collaboration.