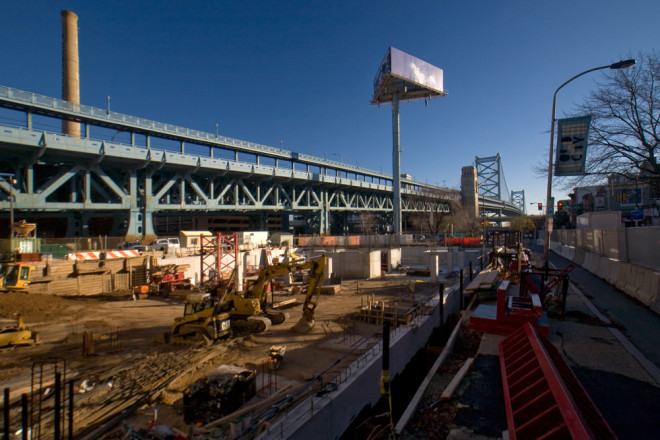 Bridge to the future: construction site of The Bridge, 205 Race | Photo: Bradley Maule

It seems pretty gruesome and grim to see a rundown of buildings Philadelphia has torn down all in one place. But it’s a jolting and important reminder that it’s happening all around us, one by one examples of buildings old and in the way of progress. At the same time, it’s just as important to take note of what’s going up. Contractor trucks and “sidewalk closed” signs dot every neighborhood within earshot of City Hall. Perhaps the residents of these new homes will find this rundown handy.

By our count, there are currently 12 cranes in Center City and University City, with another (pictured above) being assembled at The Bridge (205 Race Street), and others coming soon to the W Hotel (1441 Chestnut Street), the Boyd site (1908 Chestnut Street), SLS (301 South Broad Street), and the Fergie Tower (1213 Walnut Street). Others still lurk around the corner: the Southern Land site (1911 Walnut through 20th & Sansom), Brandywine’s 2100 Market, Dranoff’s Hyde Hotel (Broad & Pine) . . .

Philadelphia, 6 January 2016. Twelve major projects under construction, identified by their crane on the rapidly changing skyline. See if you can guess the project by its crane. 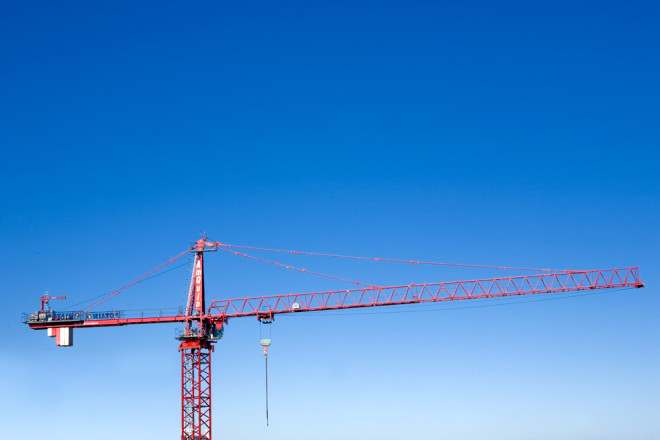 Name: 1601 Vine Street
Address: 1601 Vine Street
Use: Mixed-use (apartments, retail, community center)
Height: 32 stories / 370 feet
Expected opening: 2017
Architect: Robert A.M. Stern
The Story: Upper West Side meets Salt Lake City. When the Church of Jesus Christ of Latter Day Saints goes, they go big. The Mormons officially enter Pennsylvania with a Temple that will open this fall, and this tower estimated to open in the second half of 2017. A number of towers have been proposed over the years for this corner, but Robert A.M. Stern’s 32-story, yellow brick tower won out, supplemented by 13 townhomes and a community/genealogy center. 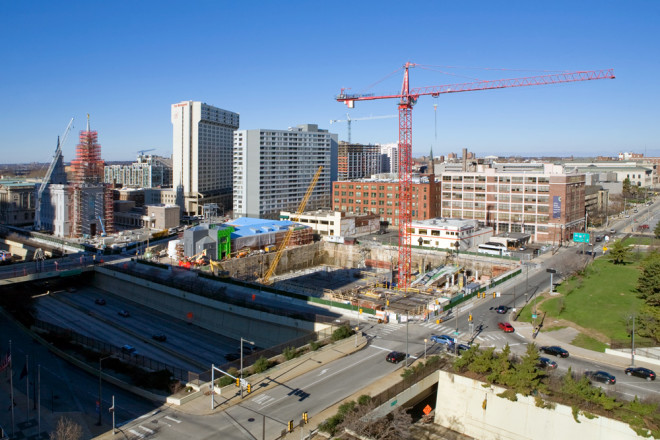 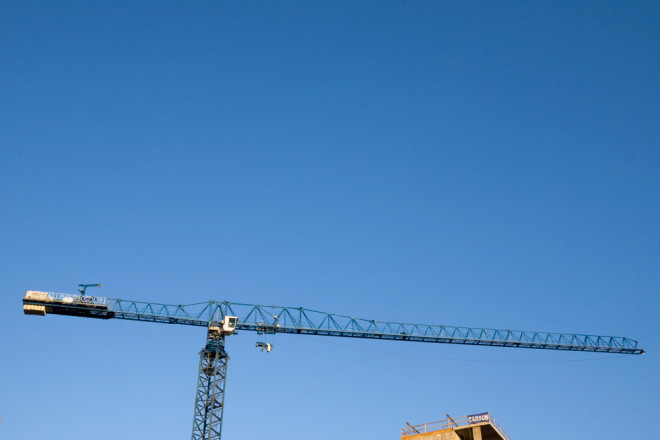 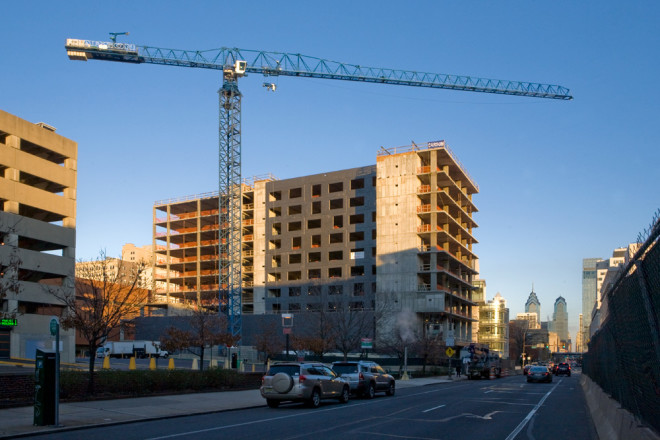 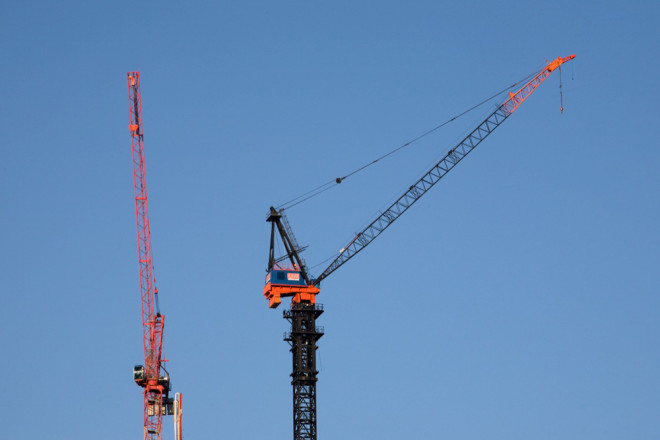 Name: FMC Tower at Cira Centre South
Address: 30th & Walnut Streets
Use: Mixed-use (office, residential)
Height: 49 stories / 736 feet
Expected opening: 2017
Architect: Pelli Clarke Pelli
The Story: The latest building of the Cira Centre complex is by far its tallest, also the tallest building west of the Schuylkill River (and seventh-tallest in Philadelphia). Due to its location at 30th & Walnut Streets, the FMC Tower will totally dominate the skyline view from the South Street Bridge upon its completion. As with the first Cira Centre tower, its design comes from starchitect César Pelli—and its curving irregular design and prominent location calls immediately downriver to the CHOP tower under construction next to the South Street Bridge. That tower, also from Pelli Clarke Pelli, is about half the height of FMC Tower and includes subtle mullions in the vertical design, where FMC uses smooth glass like Cira Centre and Evo before it. Similar to Lincoln Financial Group’s entry into general Philadelphian awareness with a name on the Eagles’ new stadium 15 years ago, the FMC sign atop this tower will make the chemical manufacturing corporation’s name better known. 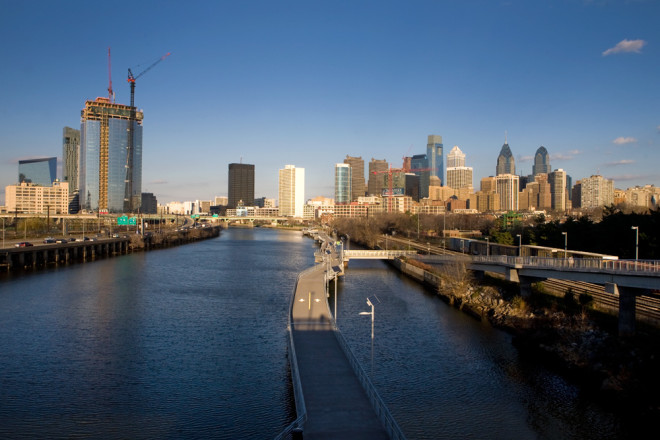 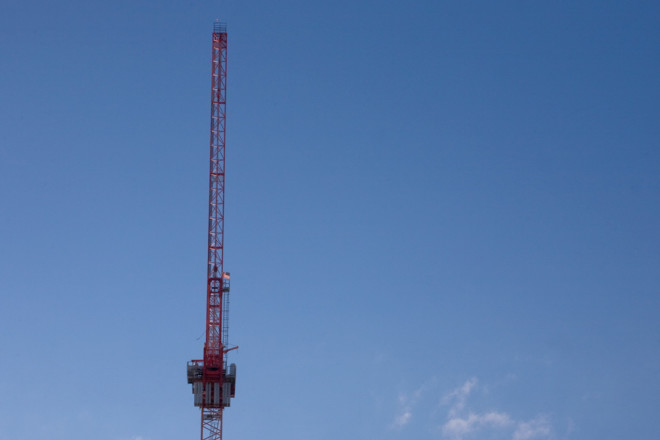 Name: Children’s Hospital of Philadelphia
Address: 700 Schuylkill Avenue
Use: Office / research
Height: 23 stories / 375 feet
Expected opening: 2017
Architect: Pelli Clarke Pelli, Ballinger
The Story: With the Schuylkill Avenue project, CHOP’s expanding campus officially hops the river. The 23-story tower, located on the site of the former Springfield Beer Distributor, is the first of three planned towers on the site, which will extend southward along Schuylkill Avenue to the former site of the moderne, circa-1941 Marine Corps Depot of Supplies Schuylkill Warehouse, later JFK Vocational School. The complex will connect directly to the South Street Bridge and to the Schuylkill Banks trail. 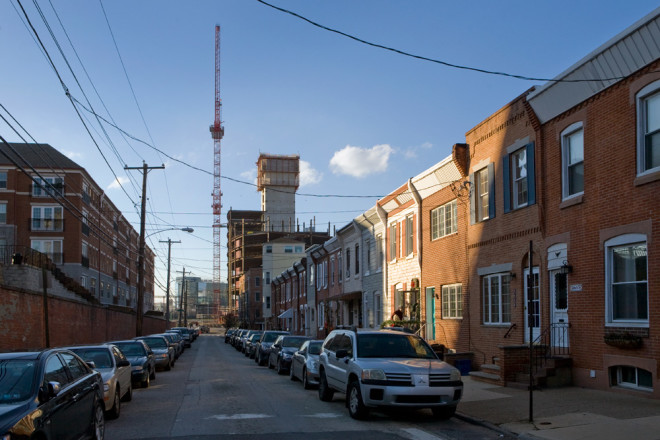 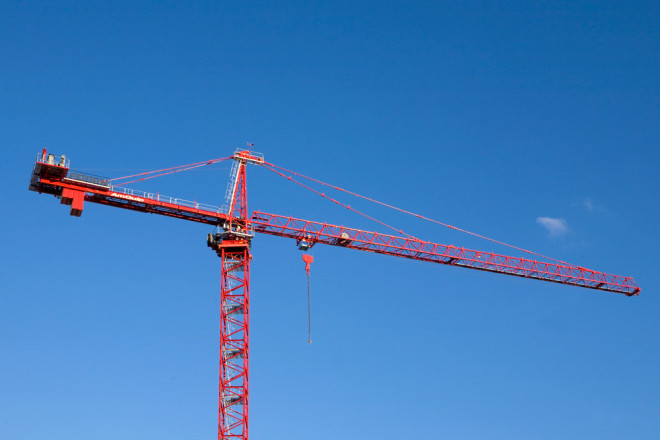 Name: One Riverside
Address: 225 South 25th Street
Use: Residential
Height: 22 stories / 260 feet
Expected opening:
Architect: Cecil Baker + Partners
The Story: While Carl Dranoff has kept himself busy on the Avenue of the Arts over the past decade, he certainly hasn’t forgotten the riverside neighborhood whose shape he shifted in the 1990s with the conversions of old industrial buildings into Locust Point, Locust on the Park, and across the river, the Left Bank. With One Riverside, he fills an empty lot with the new construction of 82 residences in a 22-story building adjacent to the Schuylkill River Park and trail (and freight railroad tracks). 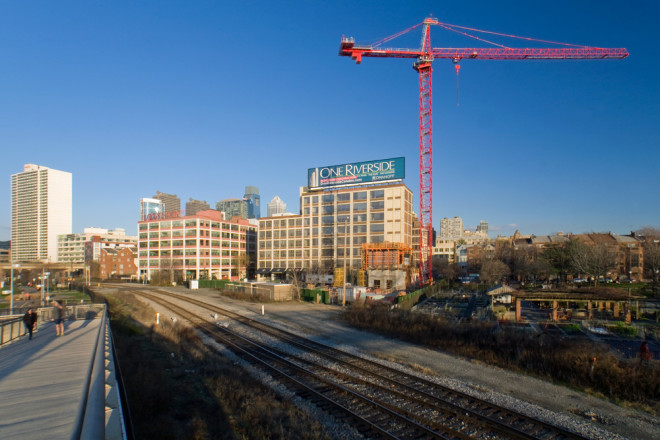 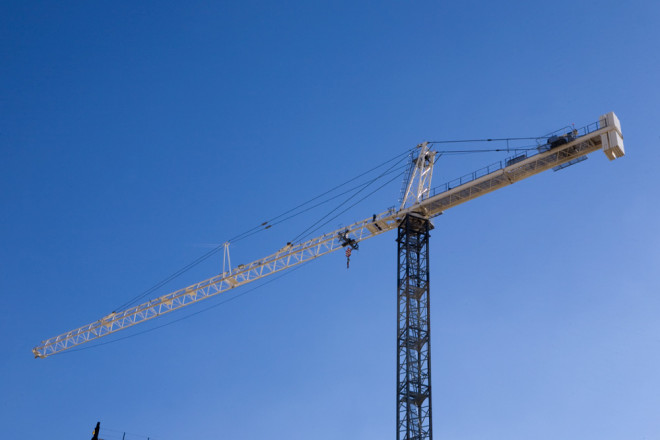 Name: Museum Towers II
Address: 1801 Buttonwood Street
Use: Residential
Height: 16 stories / 188 feet
Expected opening: 2017
Architect: Perkins Eastman
The Story: After some 30 years, Museum Towers will finally live up to its plural name. Museum Towers I’s former parking lot has been replaced with an ugly beast of a parking garage—which will eventually be screened by townhomes along 19th Street and facing Matthias Baldwin Park. 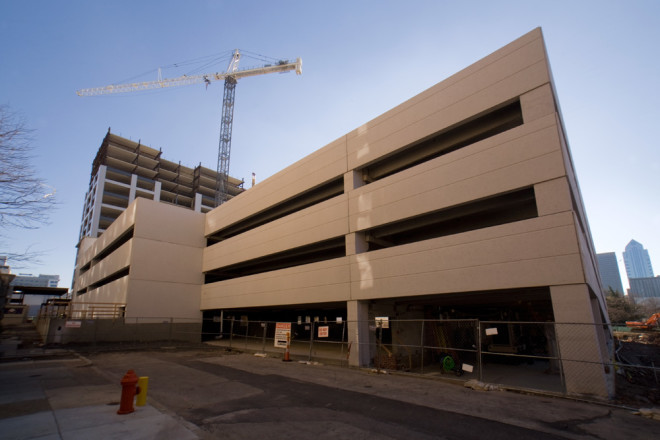 This unflattering view of Museum Towers II highlights a lack of creativity that STILL permits these awful open air parking decks; fortunately, it will eventually be blocked by homes | Photo: Bradley Maule 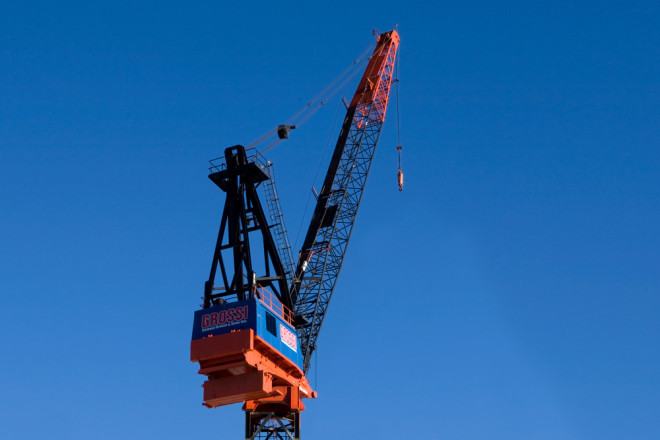 Name: Museum of the American Revolution
Address: 101 South 3rd Street
Use: Museum
Height: Three stories, cupola mercifully removed
Expected opening: 2017
Architect: Robert A.M. Stern
The Story: After nearly two decades of planning fits and starts, the Museum of the American Revolution will finally provide a singular home to tell the story of the country’s founding in the city where it happened. With an enormous collection of art and artifacts, the 118,000 square foot museum will open next year, a major new tourist attraction to blend into Independence National Historical Park. It perhaps blends a little too much into the park, as the faux-colonial architecture is anything but revolutionary. It replaces the pseudo-brutalist, Bicentennial-era visitors center and bell tower. 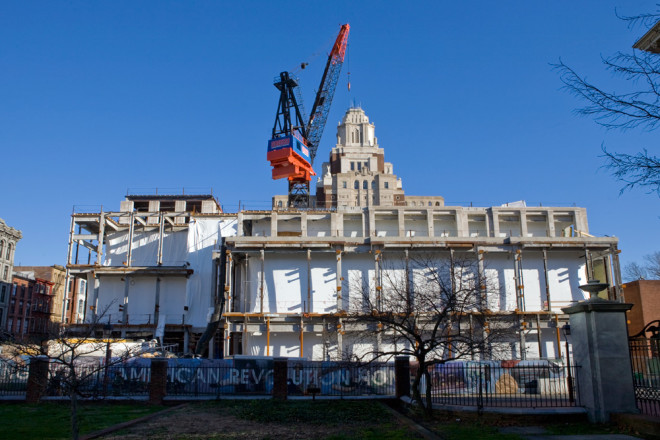 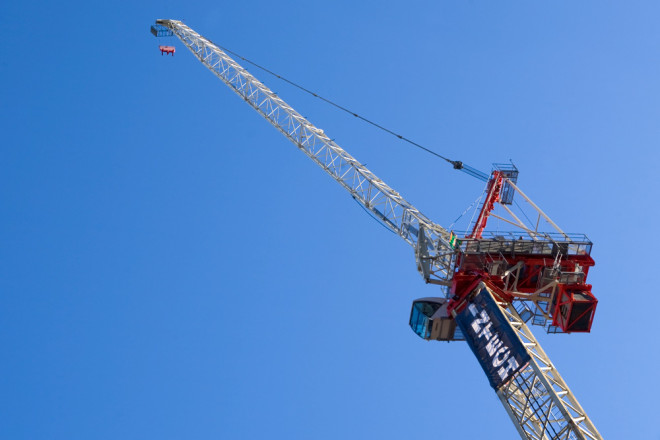 Name: 500 Walnut
Address: 500 Walnut Street
Use: Residential
Height: 26 stories / 380 feet
Expected opening: 2017
Architect: Cecil Baker + Partners
The Story: Tom Scannapieco follows up his success at 1706 Rittenhouse with another “ultra luxury” tower with robotic parking. This slender glass tower immediately across the street from Independence Hall completes a trio of similarly-scaled, varying styled towers, along with the neoclassical Penn Mutual Life Building (Ernest Matthewson, 1931) and the brutalist Penn Mutual Tower (Mitchell/Giurgola, 1975). At the same time, Cecil Baker continues to dot his adopted hometown with handsome-inoffensive contemporary designs, adding to those at Western Union, York Square, One Riverside mentioned above, and soon enough, the tower at the Boyd Theatre site and the project at Festival Pier. 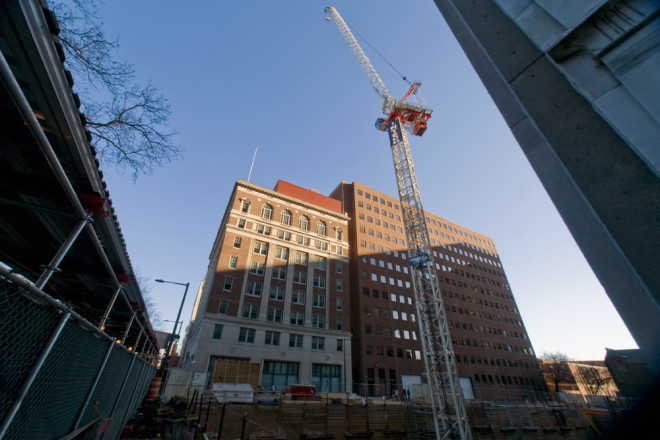 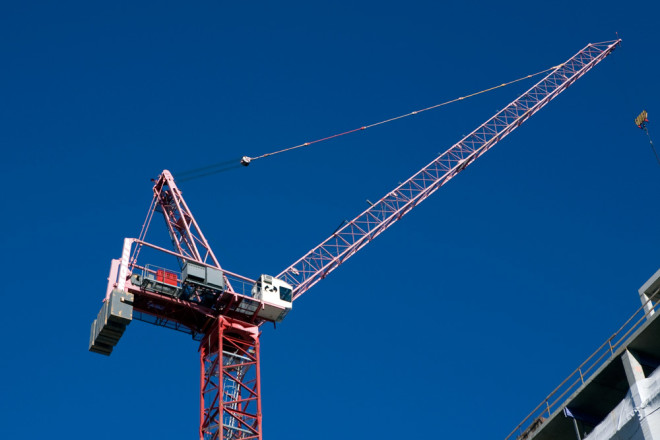 Name: One Water Street
Address: 230 North Columbus Boulevard
Use: Residential
Height: 16 stories / 198 feet
Expected opening: Fall 2016
Architect: Varenhorst
The Story: Nestled up to the western anchorage of the Ben Franklin Bridge—and the northbound on-ramp to I-95—PMC Property Group finally delivers a building to a site that’s seen many a proposal come and go. Actually two towers in one, the 250-unit apartment building is expected to open later this year. 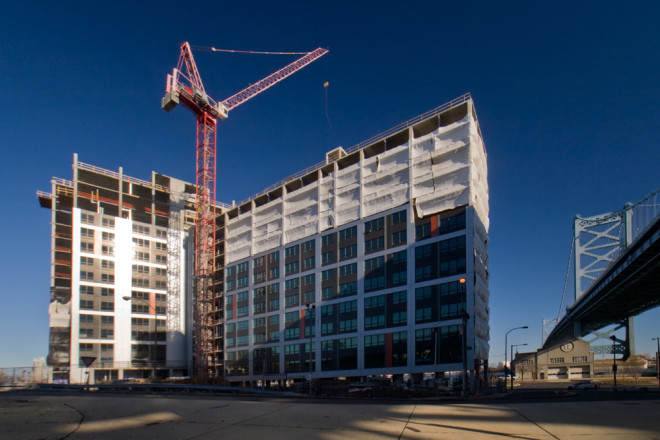 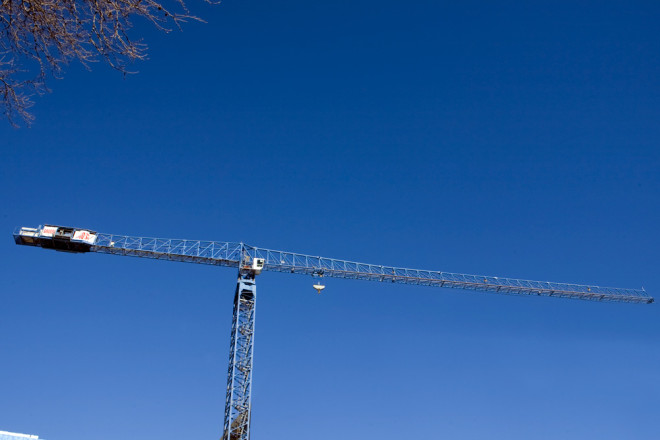 Name: Dalian on the Park
Address: 500 North 21st Street
Use: Mixed-use (residential, retail)
Height: 10 stories
Expected opening: Fall 2016
Architect: MV+A Architects
The Story: AKA Dalian on Fairmount, AKA Rodin Square, AKA Whole Foods Tower; FKA Barnes Tower, FKA Parkway 22. This site, bounded by Spring Garden Street, 21st Street, Pennsylvania Avenue, and 22nd Street, has also seen lots of comings and goings. The block, known as Rodin Square, features a 10-story, 293-apartment building called Dalian on the Park, and 500-space parking garage (oof), and an enormous retail space to be filled by Jefferson Hospital, Santander Bank, CVS, and the relocation and upsizing of Whole Foods, currently a block away on Hamilton Street. The circa-1959 Franklin Motor Inn, most recently the Best Western, made our Lost Buildings of 2014. 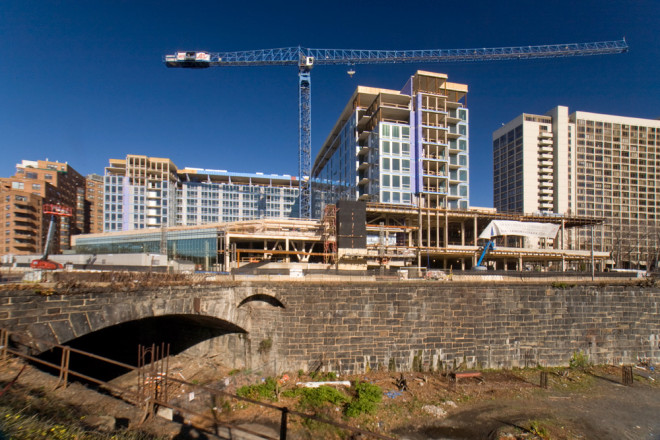 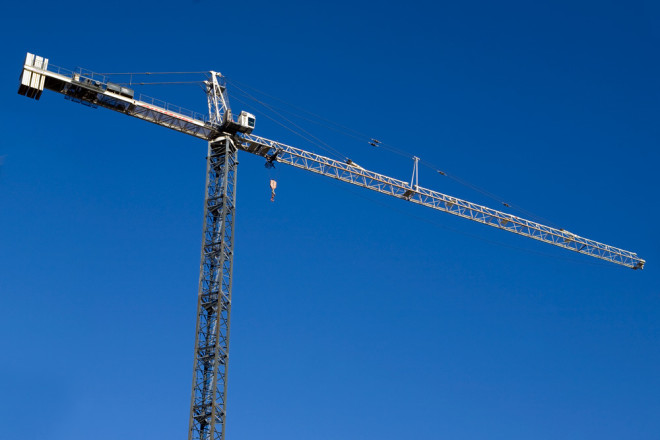 Name: East Market
Address: 1100 Market Street
Use: Mixed-use (residential, retail)
Height: 17 stories
Expected opening: 2017
Architect: BLTa
The Story: Once the idea of optimistic 1980s Philadelphia, “Market East” is no more. SEPTA Market East Station is now Jefferson Station, and the Gallery at Market East will soon become the inventively-named Fashion Outlets of Philadelphia. Across the street, the remaining two stories of the old Snellenburg’s department store, made over in the 1970s, were demolished last year to make way for the East Market project. Developed by National Real Estate Development and with one of BLTa’s best local designs, the project will feature a tower with 322 apartments, a new two-story retail podium, and a pedestrian throughway along Ludlow Street. 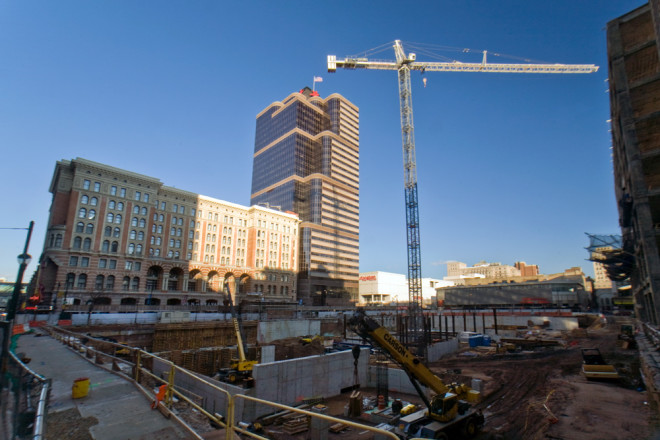 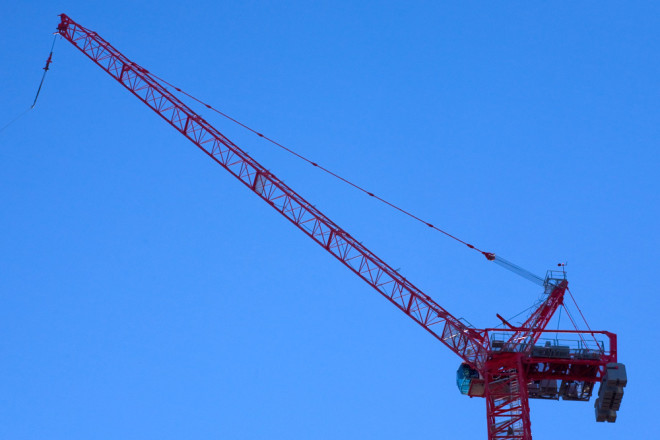 The $1.2 billion project expands Comcast’s vertical campus with open workspace that’s much less formal than Robert A.M. Stern’s Comcast Center, extends the Suburban Station concourse another block (as the once-planned American Commerce Center would have), and relocates the Four Seasons Hotel to the top floors of the tower, providing views that will look down at the One Liberty Observation Deck. NBC10 and Telemundo 62 will also relocate their studios to CITC. 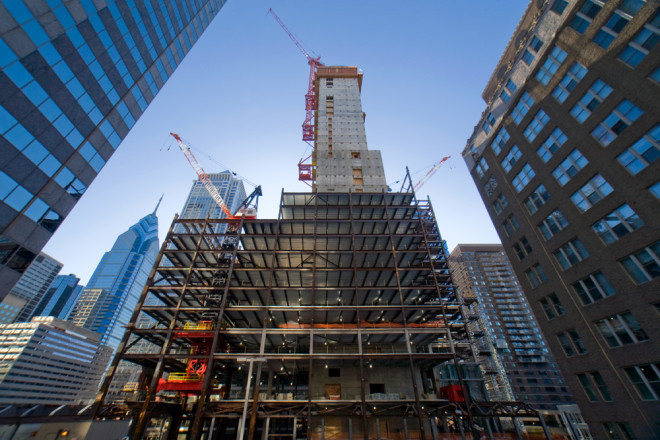 Three cranes for the price of one: CITC, reaching ever skyward | Photo: Bradley Maule