Before The Millennials: On The Move With Young Philadelphians Mid-Century 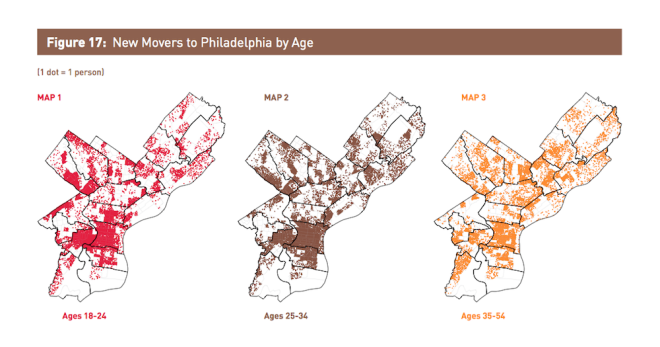 Since 2007, Philadelphia’s millennial population–young adults between 20 and 34–has grown at a faster rate than any other major U.S. city. According to a 2014 report by the Pew Charitable Trusts, millennials have gravitated toward the city’s core when choosing where to live; they make up 30-40 percent of the population in 14 zip codes within Greater Center City. This reversal of the post-World War II exodus of young adults to the suburbs continues to drive residential and commercial redevelopment, while dramatically reshaping generational population percentages across the city’s 142.6 square mile grid.

But the growth of the suburbs 1950-1990, driven as it was by young families pursuing the middle class dream, and the related decline of city neighborhoods masks a continuous trend of young adults moving to Philadelphia, falling in love with its rhythms, and staking a claim to its future. 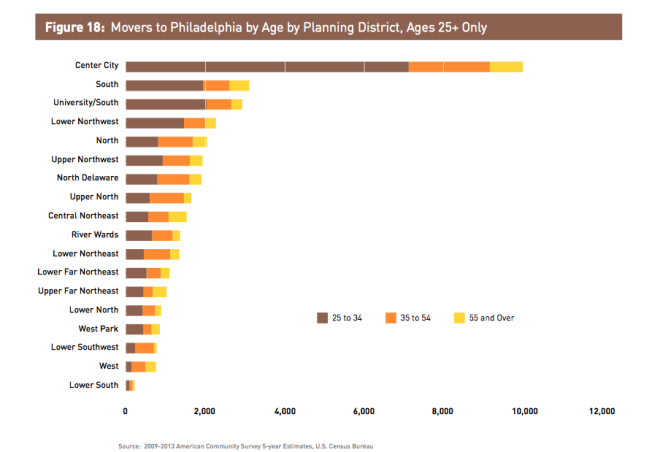 With census data we have traced the most sought-after communities for young adults in Philadelphia between 1950-1970. We chose this era specifically because the residential preferences of young people then seem so very much at odds with today. Yet, much like today, the seemingly organic choices made by young people then were influenced by both intentional and unplanned trends beyond their control (including institutionalized racism), which we will attempt to explain, decade-by-decade, map-by-map. 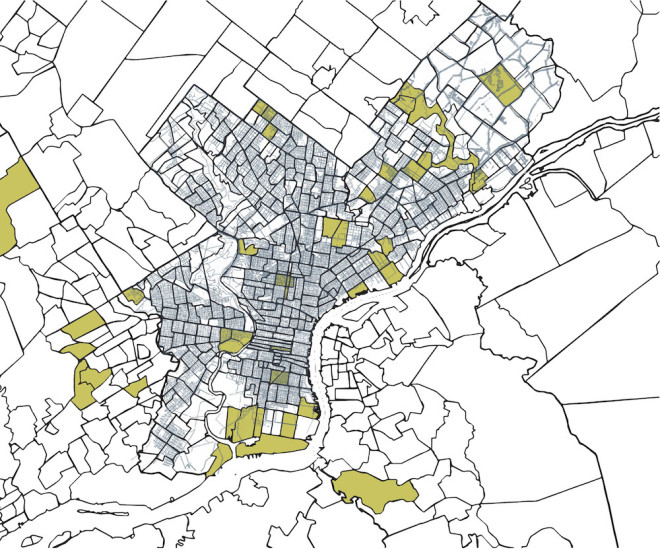 Philadelphia in 1950 was busy, crowded, and prosperous, though certainly worn–much needed neighborhood investment was waylaid by World War II. But the war brought immense industrial investment–one in six defense dollars was spent in Philadelphia, which attracted enough war-industry workers to exceed two million residents for the first (and thus far, only) time in its history. The 1947 Better Philadelphia Exhibition awed thousands with a futuristic reimagining of the city, while an aggressive reform movement edged closer to unseating the ossified Republican machine in City Hall and turning this plan into policy.

The map of Philadelphia County above shows developed area as of 1950. Much of the Northeast was yet to be filled in. Street patterns in the older part of the city, while mostly familiar to modern eyes, contain deviations for industrial concerns and commercial uses that have long since departed.

The military had a huge impact on the city’s demographic landscape in 1950, as millions of young men and women under its employ during World War II were transitioning into civilian society, backed by federal money for housing and education. At the same time, the onset of the Cold War meant that World War II’s armament industry was still very much active and it, too, maintained a strong presence in various Philadelphia neighborhoods. The Marine Corps Depot of Supplies Schuylkill Warehouse in Devil’s Pocket is one example.

Just west of Roosevelt Boulevard in the Northeast, and in the furthest stretches of Overbrook and Cedarbrook, new construction was rapidly being filled with young homeowners, many of them veterans receiving mortgage assistance under the auspices of the GI Bill. Infill development in Port Richmond’s furthest stretches along Castor Avenue attracted a similar crowd, and further in the suburbs a similar cluster can be seen in Drexel Hill in Delaware County.

Soldiers that had arrived home from the war, but had not yet received mortgage assistance, still received valuable help in the form of job placements and education. As wartime female factory workers went to school or conformed to 1950s gender expectations of domesticity and gendered labor, their positions were often taken by returning servicemen, who would often be placed in no-frills public housing developments that were built near major industries. Note the clusters in Port Richmond near the former Cramp Shipyard, along Frankford Creek with access to the Frankford Arsenal, and in Mt. Peace Cemetery with access to Midvale Steel and the Budd Manufacturing Plant in Nicetown. While some returning soldiers returned to working in munitions, many were devoting themselves full-time to college, populating the vicinity of Temple’s campus to an extent not seen again for decades.

Although soldiers were returning from the theaters of World War II in droves, plenty remained in active duty, and many new soldiers signed up to meet the personnel needs of the Cold War. This explains the clusters of younger residents near the Navy Yard, the Northeast Philadelphia Airfield, the Northeast’s Naval Supply Depot, and, as a result of exposure to the infectious agents of the tropical and subtropical Pacific, in the Philadelphia Hospital for Contagious Diseases near the modern location of St. Christopher’s Hospital in Juniata.

Finally, it is worth pointing out the cluster of young people along Passyunk Avenue in South Philadelphia. Its existence owes itself to a quirk of U.S. immigration law. The Immigration Act of 1924 (Johnson–Reed Act) severely limited immigration from Southern and Eastern Europe, causing men who would previously have shuttled back and forth between their native country and temporary work in America to settle permanently in the United States. They brought their spouses, who, prior to the legislation, typically stayed behind to raise their children abroad, awaiting the husband’s return. As a result, an entire cohort of Italian children who might have otherwise been born and raised in Italy now spent their formative years in South Philadelphia, reaching young adulthood in the 1940s and 1950s. 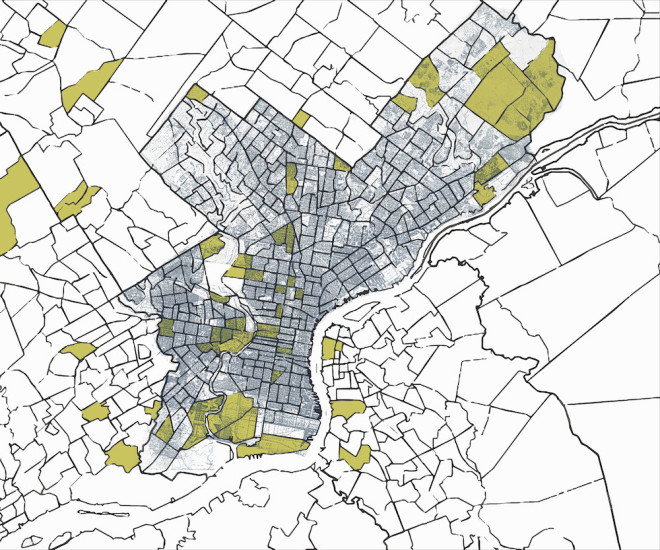 As 1960 rolled around, the Northeast continued to boom, though the frontier of development had jumped over the Pennypack River, and the military’s presence, while reduced, was still centered around the Navy Yard. At the same time, many new social developments had come to affect the city. The large-scale migration of southern African Americans to Philadelphia’s wartime industries meant that the city’s older black enclaves, hemmed in by both overt and institutional racism (like red-lining), were bursting at the seams. Those that were willing to risk a move to neighboring white areas tended to be younger and upwardly-mobile couples. Clusters of young black families explain several of the gold patches on the 1960 map, which is based on the same statistical breakdown of quantiles as the 1950s. Strawberry Mansion, Nicetown, Parkside, and Cobbs Creek, all bordering on more established black enclaves, demonstrate this phenomenon.

In Powelton Village and Eastwick, a rare social experiment–the deliberately integrated neighborhood–attracted young homebuyers of both races. In the former, the effort was organically driven, encouraged with a Quaker ethos. In the latter, the city condemned a vast tract of haphazard marshland settlements that were integrated by virtue of their isolation, replacing them with a showpiece development that, at least temporarily, was carefully managed to attract young homebuyers of both races.

In Francisville and in lower North Philadelphia, two clusters reflect a burgeoning population of young Puerto Ricans who were increasingly leaving the Caribbean for opportunity in Philadelphia and New York.

LaSalle University, Chestnut Hill College, and in the suburbs, Villanova, all appear as statistically noteworthy clusters that reflect the accelerated entry of the region’s ethnic Catholics into the middle class in the previous decade.

One racially diverse cluster that appears on the map has a more sordid origin than the others. Along the Delaware River, Holmesburg Prison incarcerated an entire cohort of young men that were left out of the previous decade’s economic success.

Most of the remaining clusters are apartment complexes built on large estates that had been subdivided in the last decade. Most notable is Cheltenham’s Lynnewood Gardens, built on the former Widener family estate. The estate had been sold in 1952 to eccentric fundamentalist minister Carl McIntire, who created a seminary in the main neoclassical building and sold off the rest. 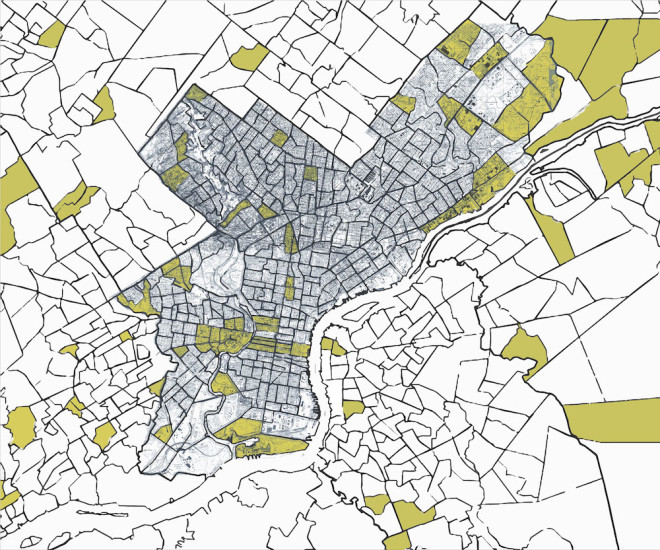 The 1970s map is largely a continuation of the previous map’s population trends, though many had slowed down and achieved their final extent in this census. Young black homeowners create a notable presence in Wynnefield, Kingsessing, West Oak Lane, Fern Rock, Hunting Park, Walnut Hill, and in a rare suburban example, in Yeadon. Roxborough’s outer parts, and the most distant parts of the Northeast, are the city’s final new construction frontier. South Street’s limbo–with the planned construction of the Crosstown Expressway (which wasn’t finally defeated until the 1980s)–bordering the now-flourishing Society Hill, fostered the countercultural enclave that would eventually be too vibrant to bulldoze. In the Northwest, East Falls’ Alden Park, a high-rise development whose aristocratic luster was beginning to fade, subdivided its extensive grounds for more low-rise apartments, as did the Germantown Cricket Club, another former bastion of blue blood Philadelphia.

As Philadelphia achieved build out by the 1970 Census, a dearth of development in the next few decades deprived the city of the newness that was then so appealing to young residents. Not until Center City finally began to evolve into the thriving district originally envisioned in the redevelopment schemes of the 1950s did Philadelphia begin to attract young residents again. Now, young and often newly established residents have expanded into neighborhoods surrounding the city core at a dizzying pace, evident in gentrification friction all over the city (Point Breeze, East Kensington, et, al.) in areas that were once far off the desired path.