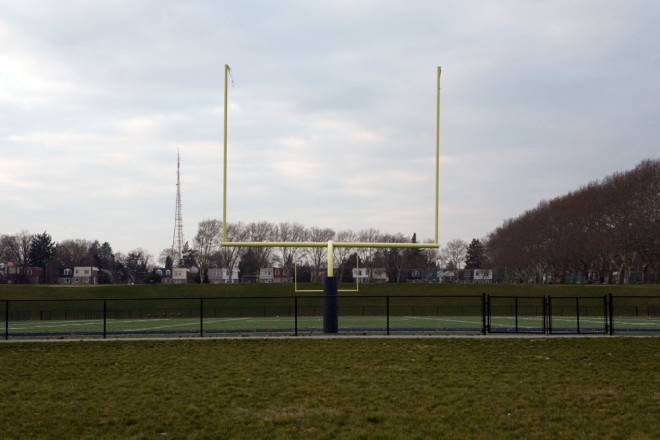 It may not look like much now, but these goalposts once served Temple Owls—and Philadelphia Eagles—faithful | Photo: Bradley Maule

Temple University’s football team finished the 2015 regular season 10-3 and spent a moment nationally ranked, the first time that’s happened in a generation. The timing has proved convenient for a university trying to convince its North Philly neighbors that it needs a dedicated stadium on campus, despite criticism from local residents, Mayor-Elect Jim Kenney, and the other athletic programs slashed to prop up football. But even though the Philadelphia Eagles have shared their stadium—for a cost—with Temple for the past 37 years, the university did once have its own stadium. For fifty years, Owls football fans cheered their team at the 34,000-seat Temple Stadium, beginning in 1928 and ending with the Owls’ move to Veterans Stadium at the start of the 1978 season.

Located near the Cheltenham Avenue and Ogontz Avenue nexus of the West Oak Lane neighborhood and Cheltenham Township, Temple Stadium wasn’t on campus, but it was easy to reach by transit. The gates were a ten minute walk from the Route 6 trolley, accessible by a quick ride from campus on the Broad Street Subway. 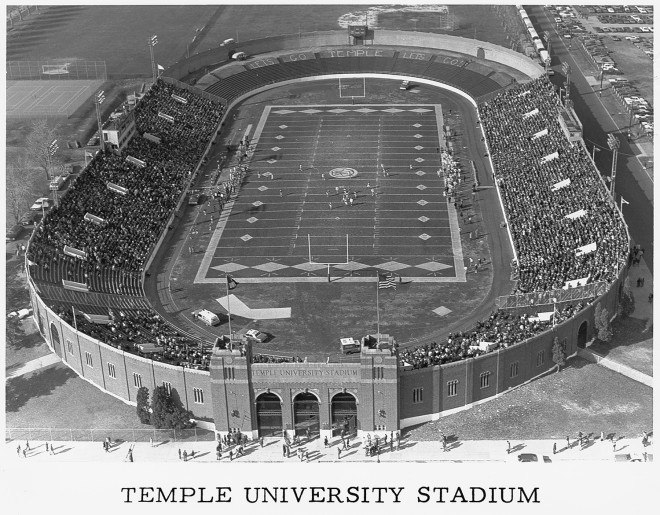 In addition to hosting no less than 263 Owls home games—including a 1934 shutout win over Villanova with 40,000 in attendance—Temple Stadium hosted professional sports. During the 1960s, the Continental Football League Bulldogs and National Professional Soccer League Spartans called Temple Stadium home.

One such occasion was on November 6, 1934. Philadelphia had no National Football League team after the Frankford Yellow Jackets departed the NFL after eight seasons in 1931. Two years later, the league granted a Philadelphia-area franchise to a new team that would be named the Eagles. Invoking populism during the bleakest year of the great depression, the team was named after the blue eagle symbol of president Franklin D. Roosevelt’s National Recovery Administration, better known as the New Deal. 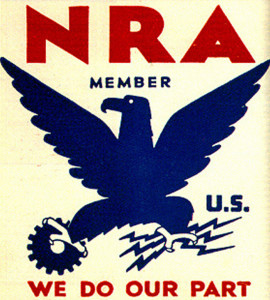 Who knew the Philadelphia Eagles drew their identity from the NRA—a patriotic, political project? | Image via Wikipedia

Compared to the multi billion dollar juggernaut the NFL has become, it’s hard to imagine today how marginal an attraction the NFL was early on. Eagles home games were played at the Baker Bowl, the Phillies’ stadium located in the heart of North Philly at the corner of Broad Street and Lehigh Avenue. But the scheduled week seven game of the 1934 season, a matchup against the Cincinnati football Reds, saw the Eagles bumped from their home venue—by a high school football game. It’s estimated that less than 2,000 turned out to see the relocated Eagles/Reds game at Temple Stadium. Those who did witnessed halfback Swede Hanson rush for 170 yards and three touchdowns in a game that would go down in history.

That afternoon’s 64-0 rout by the Eagles remains the most lopsided regular-season score in NFL history, and the most points ever scored by the Eagles in a single game. (Only the 1940 Championship bests that score, the Chicago Bears trouncing the Washington Redskins 73-0.) The Cincinnati Reds did not return to the NFL for the 1935 season.

Dissatisfied with their next home at Shibe Park (later known as Connie Mack Stadium), in 1952 the Eagles sought to purchase Temple Stadium. The school’s asking price—a cool $1 million—put an abrupt end to that idea.

A generation later, music festivals were all the rage, and in the spring of 1970 Temple Stadium would host one for the ages. 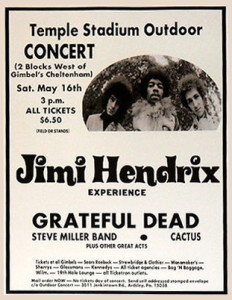 Jimi & the Dead do West Oak Lane | Image via ConcertPosterArt.com

Billed as the “Super Saturday Rock Festival,” the lineup included half a dozen rock bands headlined by Steve Miller, the Grateful Dead, and the Jimi Hendrix Experience. With Hendrix’s untimely death later that summer, this is reputed to be the only time that psychedelic legends Jimi Hendrix and the Grateful Dead played on the same stage on the same day. Tickets ran a mere $6.50.

Remarkably, a recording of Hendrix’s Temple Stadium performance survives. His opening remarks speak to the troubled times; the police killings of four student protesters at Kent State had happened a week earlier. And the day before the show, on May 15, 1970, two African American students were killed and twelve wounded by Mississippi state police shotgun blasts during unrest at Jackson State College. After taking the stage that evening, Hendrix’s first words were these: “Drag that America’s guns have made the crack in the Liberty Bell their symbol.” The recording can be accessed here. (The Dead’s set is HERE.)

Fifteen years later Temple Stadium served a supportive role in the aftermath of the MOVE bombing. On May 13, 1985, police attempted to serve warrants on occupants of 6221 Osage Avenue in West Philadelphia. Four years earlier, the mid-block row house in the tidy working class neighborhood of Cobbs Creek had been converted into a fortified compound by the radical group MOVE. Authorities classified MOVE as a terrorist organization and moved in that day to clear the premises. Holed up in the house despite teargas injections through the party walls, MOVE members exchanged sporadic gunfire with police for most of the day. Late in the afternoon an explosive charge was dropped from a State Police helicopter onto a bunker on the roof of 6221. The resulting fire killed 11 MOVE members and destroyed three city blocks. Goode administration officials used Temple Stadium to temporarily house the hundreds of City residents made homeless by the fire.

In later decades, Temple men’s soccer played there, and beginning in 1991, Owls women’s soccer. Finally in 1997, at a cost equal to the dollars spent build it, Temple officials ordered the demolition of the brick and concrete stadium. 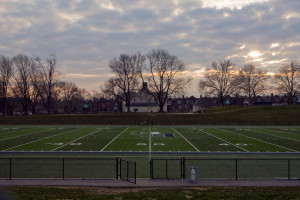 Even with the stadium removed, the playing field—still depressed in an earthen bowl 20 feet below street level—remained in use. The final Temple event held there was Temple Owls annual Cherry and White game in April 2002. The Temple News described the day’s significance this way:

“The Cherry and White game not only marks the beginning [of the 2002 season], but the end of Temple Stadium. Temple Stadium has been around since 1928, and has seen greats like Davey O’Brien, Doak Walker, and Pop Warner grace its field.

“The stadium itself was torn down in 1997, but the field was preserved, and now the Cherry and White game will close that field down, for all the former All-Americans, and all of Temple’s football history.”

In 2006, the university sold the site to Enon Tabernacle Baptist Church for a reported $4.5 million. Enon has its own youth football team, the Enon Eagles, who use the recently renovated field. Nearby Arcadia University’s baseball team uses the adjacent baseball field.