The Near Death Of A Dowager And Her Vow To God 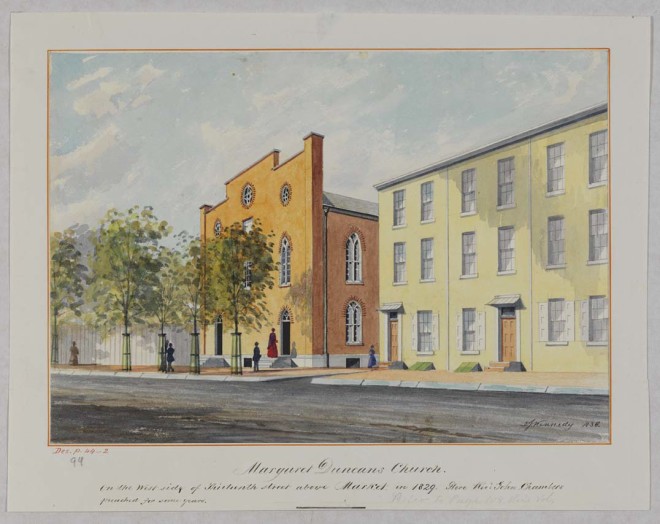 The Vow Church on 13th Street in 1829. Watercolor by David Johnson Kennedy | Courtesy of the Historical Society of Pennsylvania

The histories of churches, synagogues, and cemeteries are very useful when conducting historical research on Philadelphia. A congregation will often commission a book on the history of their house of worship to be published on a major anniversary. This type of documentation is fascinating and often recalls social and economic conditions of neighborhoods when a church or synagogue was built and decisions that led congregations to leave their sanctuary and move to a different location. One church with a truly unusual story has none such resource. The Church of the Vow (a.k.a. Margaret Duncan’s Church and Saint Margaret’s Church) is mentioned in many local Presbyterian histories, but there is no primary source that adequately and accurately tells the church’s story and its peculiar origins, one that involved the near sacrificial death of an elderly widow on a foundering ship in the Atlantic Ocean.

Once located a stone’s throw from what would become City Hall, this small, long forgotten Presbyterian church was widely celebrated in the annals of Philadelphia’s religious institutions throughout the 19th century. The Church of the Vow was founded by Mrs. Margaret Duncan, widow of a wealthy Philadelphia merchant and a native of Scotland or Ireland. Duncan left Philadelphia for a trip to her homeland by ship in 1798 (some accounts have it that this occurred in 1758). She was in her seventies or eighties at the time of the arduous transatlantic voyage.

On the return trip to America, several things conspired to set up a disaster. The ship was greatly overcrowded, provisions were inadequate for such a long journey, the captain had never crossed the Atlantic before, and the compass was out of order. Facing incessant head winds and stormy weather, the vessel became lost and the voyage doomed. The passengers, most of them poor emigrants, were put on short rations. The ship began to take on water. The captain and crew gave up on trying to save the vessel and may have even deserted the ship.

With no more food and water, the passengers faced starvation. Desperation led to dark decisions and cannibalism was proposed. They decided to determine by lottery who would be sacrificed to keep the rest alive. It was promised that if land was sighted by daybreak, the winner would be spared. Margaret Duncan drew the unlucky straw and immediately returned to her berth to pray. She made a sacred vow to God that if He would spare her life, and save the passengers as well, she would build a church as a memorial to her deliverance. Duncan also pledged to educate her grandson, who may have accompanied her on the journey, as a Presbyterian minister.

The desperate, reverent prayers of Duncan were answered. A rain fell and the tormenting thirst of the passengers was relieved. Next, a large vessel came into sight and rescued the passengers. The ship of salvation entered the Delaware Bay and all the passengers reached Philadelphia safely. The incredible story was discussed for decades. 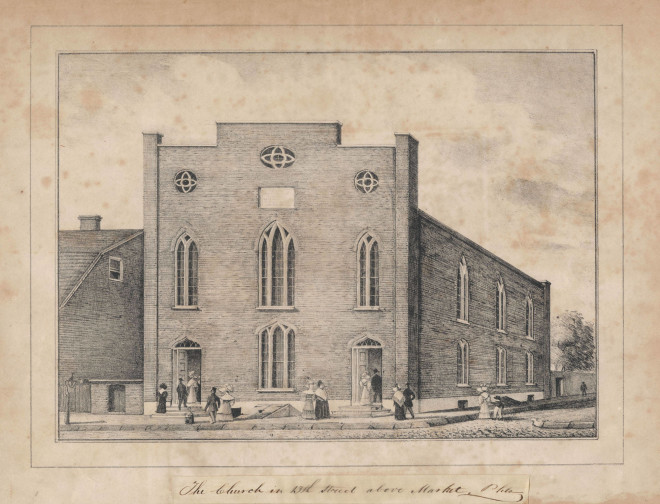 Another view of the Church of the Vow, c.1832 | Courtesy of the Library Company of Philadelphia

Mrs. Duncan died on November 16th, 1802. In her will, she left a lot of land on the west side of 13th Street between Market and Filbert Streets and money to build her thank you letter to God. She also left specific instructions as to the church’s appearance and directed that it was to fall under the Associate Reformed faith of Presbyterianism, to which she belonged. Construction began in 1805, but the 50′ x 60′ brick building was not completed until 1815 due to problems with the contractor’s work.

The story of Mrs. Duncan and her vow had been widely reported, so the church already had a tremendous notoriety when it opened, although it had no formal name. Only a marble marker bearing Duncan’s name was affixed to the 13th Street side of the edifice. The church was commonly known as “The Duncan Church” or “The Vow” in its early years. Margaret’s grandson, John Mason Duncan, preached the dedication sermon there. 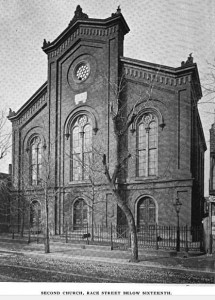 Still, conflict persisted among congregants from the two, merged sects. The dispute was in litigation for several years before settling out of court. By the mid-1820s, the controversy was centered on the appointment of Rev. John Chambers as a new minister, who would become pastor of the Chambers-Wylie Memorial Presbyterian Church on South Broad Street several decades later.

The Associate Reformists agreed to reimburse members of the Ninth Presbyterian Church for money the group had spent on maintaining the Church of the Vow with the stipulation of leaving the building standing. In 1841, Ninth Presbyterian Church congregants purchased a lot at the northwest corner of Sixteenth and Sansom Streets to build their new church. By 1916, that house of worship was replaced by a 13-floor tower called the Otis Building, now called The Point at Rittenhouse Row, an apartment house with retail on the ground floor.

The Associate Reformed congregation of the Church of the Vow continued to worship on 13th Street until 1855. They built a new church on the north side of Race Street between 15th and 16th, and changed their name to Second United Presbyterian Church in 1858. As with countless churches and synagogues, the building was razed as the city expanded and Magee Rehabilitation Hospital has occupied the site since the 1950s.

The Church of the Vow was demolished in 1855. William Elliot Griffis, a biographer of Reverend John Chambers, wrote in 1903 of Chambers’ fondness of the church, quoting the reverend as once saying, “The little church where we worshipped so long… It is a shame that the church was ever destroyed.” The biographer related to Chambers sentiment. “I can remember as a little boy going to see the debris of the ruins, the piled up old brick partially cleaned of mortar, the dust and the broken bits of lime, and the great hollow place where the cellar had been,” wrote Griffis. 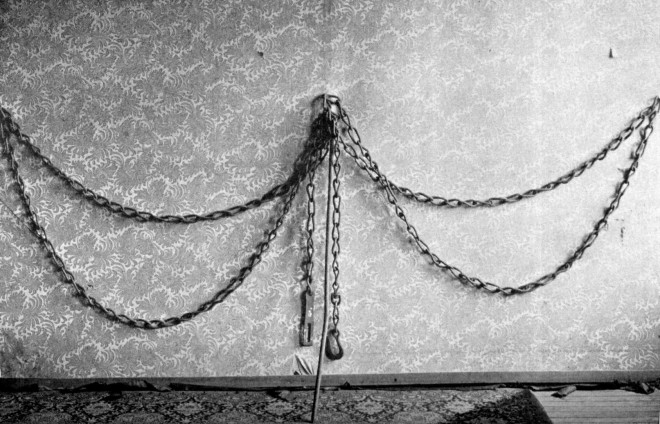 This chain was once used at Old Pine Street Church so that horsemen and vehicles could not pass by during the hours of worship. The Pennsylvania “Chain Act” of 1798 allowed churches to fasten chains across the streets in their vicinity for this purpose. One of the last posts used to support such chains remained was at the Church of the Vow’s former location along 13th Street near Filbert Street until the early 20th century | Source: A History of Old Pine Street: Being the Record of an Hundred and Forty Years in the Life of a Colonial Church (1905)

Founded in fulfillment of a solemn vow to God made while escaping cannibalism and a shipwreck, great things were expected from the Church of the Vow. Its influence was anticipated to be handed down to generations upon generations of future Philadelphians. Indeed, this modest church directly or indirectly engendered at least ten different Presbyterian houses of worship in the city. Sadly, most of these churches have been demolished.

Margaret Duncan was buried alongside her husband in the burial ground of Old Scots’ Presbyterian Church on Bainbridge Street, east of 4th Street. She may have dedicated the ground for this cemetery in her younger years, as it was commonly called the Duncan Burying Ground. In 1892, the old graveyard was cleared to make way for the building that currently stands at 328-30 Bainbridge Street. (The church itself had been demolished by that time.) The remains of Margaret Duncan were moved, but no record was kept regarding where. However, some historians believe that this woman of her word was reinterred at Mt. Moriah Cemetery in Cobbs Creek.